Get Familiar With Kinder, The Sister Duo Bringing Club Beats Back To The Mainstream

Starting out as DJs and fast becoming favourites on the festival circuit, opening for the likes of Marshmello and RL Grime, sisters Briony and Savannah Osei of Kinder have been on a wild ride of creativity the past few years. Stepping out from behind the decks, they dropped their original track—and instant smash hit—Come Along in the middle of lockdown life. With vibing beats and paying homage to their Ghanian heritage, it was the musical uplift we all needed.

The siblings, who split their time between Maitland and Sydney, have just released their new track Bus Stop, so we caught up with them to chat about the inspo behind it, how they made the jump from DJing to singing and the artists they’d most like to collaborate with.

You started out as DJs, becoming regulars on the festival circuit—how did you cross over to performing your own music?

Briony: The first time we sang live was at the Grass Is Greener festival and we were absolutely terrified and shitting ourselves because we had never done anything like that before and I think something also went wrong technically.
Savannah: When we got off stage we were like oh no that was terrible, but luckily our mum had recorded it for us so when we watched it back we were like, 'oh it actually wasn't as bad as we thought', which was a relief. I think with each time we've performed, it's gotten easier. But we're still learning and working out the show but we definitely have more of a groove now. 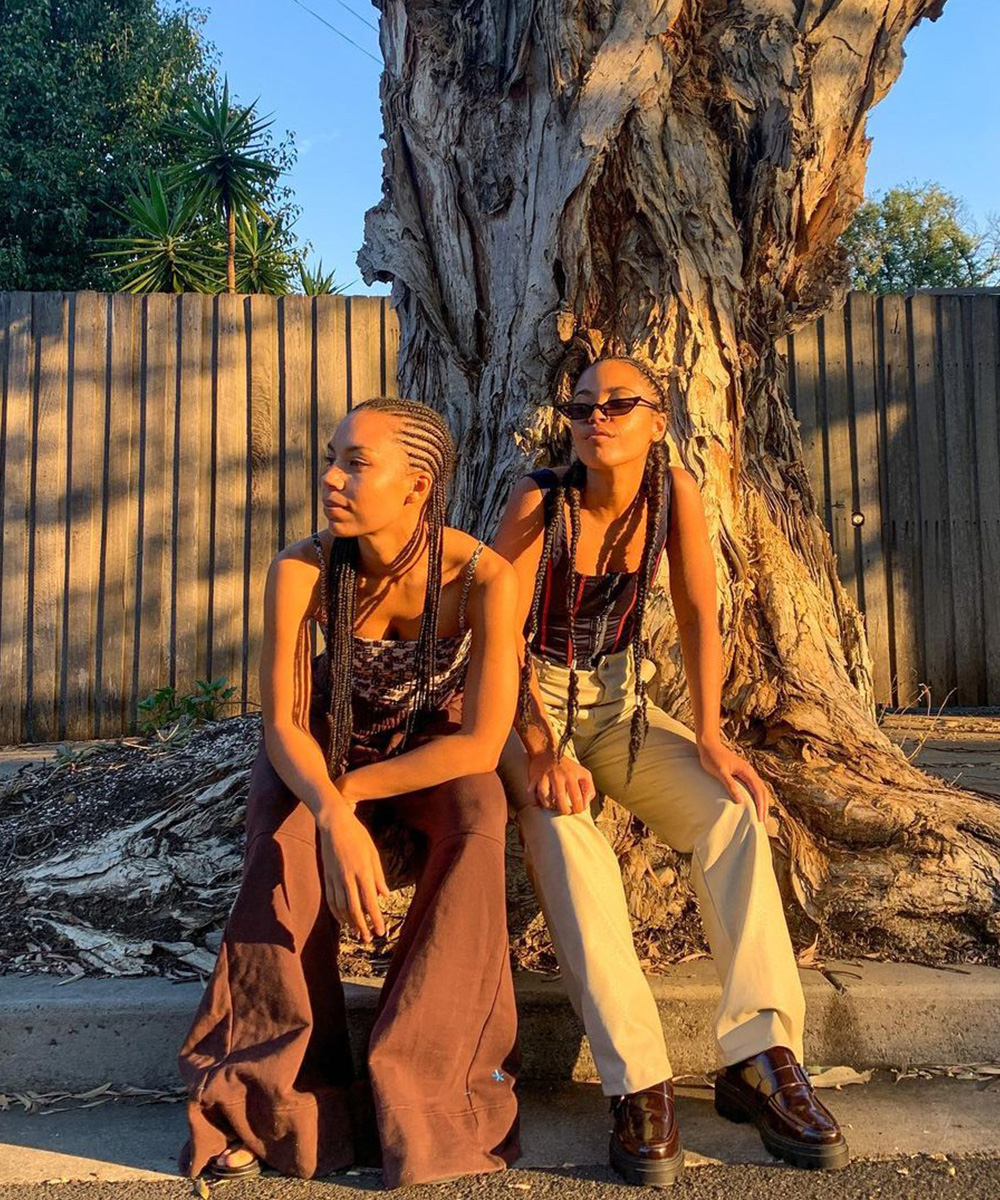 Was that always the ultimate goal or did something spark the change?

Savannah: No, at first we just wanted to be DJs and songwriters and producers—to basically write for other artists but then we ended up having a meeting with someone at a publishing company and he was like 'you sing on your demos already, you should be doing this for real'. Before that we really never thought of being singers.
Briony: It kind of just took that one person to spark our confidence to go for it.

Who or what inspires the music you guys are putting out today?

Briony: It's funny because we're inspired by certain artists that don't necessarily align with our music but in some abstract way it does inspire it if that makes sense? For example, right now Savannah and I are loving this artist Fred Again, who we have just become obsessed with and I wouldn't say our music is anything like his but we're so inspired by his work. We also find artists like Halsey and Lorde empowering with what they do.

You dropped Come Along last year—it’s the ultimate pump-up tune—how did that song come to be?

Savannah: It started at Ricochet Songwriting Camp which was run by KLP. We got randomly put in a room with a producer called Mookhi and another artist A.GIRL, and we got talking about our backgrounds. A.GIRL is from New Zealand and we're from Ghana and we talked about the similarities in culture and community and how we're all one. For example, if you run into another Ghanian person in Australia you just feel like you're back at home and you belong. We were so inspired by that common ground we started writing. The song is about belonging and having fun.

I know your heritage is really important to you, is that something that you want to include in all aspects of your music?

Briony: I think for the immediate body of work that we've been looking at right now, yes. There are a lot of songs—that will be released this year—that do really revolve that concept of family and heritage because it's something that Savannah and I hadn't really explored before. We moved away from our dad when we were really young so that side of the family we weren't really connected to for a long time—now we are reconnecting. It's been very therapeutic to explore that through this body of work.

Is heading back to Ghana on the cards when we're allowed to travel again?

Savannah: Yes, we were meant to be going in April last year. We were going to a writing camp in Nigeria and then we were heading to Ghana to see all of our family but obviously we couldn't do that, so that will be our first trip when we’re allowed again.

As a duo, what’s your song writing process like?

Savannah: I start by making a beat and coming up with some kind of cool percussion and then we'll start singing melodies and recording them together until we find ones we like. Then we will move onto the lyrics and Briony will lead because that's what her thing is and mine is more the melody and creating the music. But saying that, we do combine the process a lot more now.
Briony: That's usually our structure—start with a beat, then melody and then lyrics. But that doesn't always happen. We have written songs in the past which were inspired by the lyrics first or a semi poem or story and we go from there.

Briony, are you always making notes at the most random of times when you think of some lyrics?

Briony: Yes always. In my notes on my phone and the same with voice memos. A lot of songs in the latest body of work have come from voice memos that we've had while driving.

Your new song Bus Stop is awesome, I heard that it has a connection to your dad?

Savannah: Well at first I just came up with the idea of a bus—which is quite literal for me because I'm always missing the bus, I'm always standing on the side of the road with it passing me by. And my dad is similar, he's always late and we say he runs on African time. So it was a bit of a joke (laughs).

Live shows were effectively cancelled last year, what else did you get up to?

Briony: We did a lot of writing and reflecting, because when you're going so fast all the time, it's hard to sit back and really look at what we can work on and change. We had a lot of time to refine and work on writing and things to do with the live show. We tried to be as productive as we could.

What did you miss the most about performing live?

Savannah: Because we are dance artists it's very much about connecting with the audience and moving with them—that was really the hardest thing. We did some live streams through iso but it just wasn't the same as being able to connect and dance with them. I missed watching people and really having that engagement. 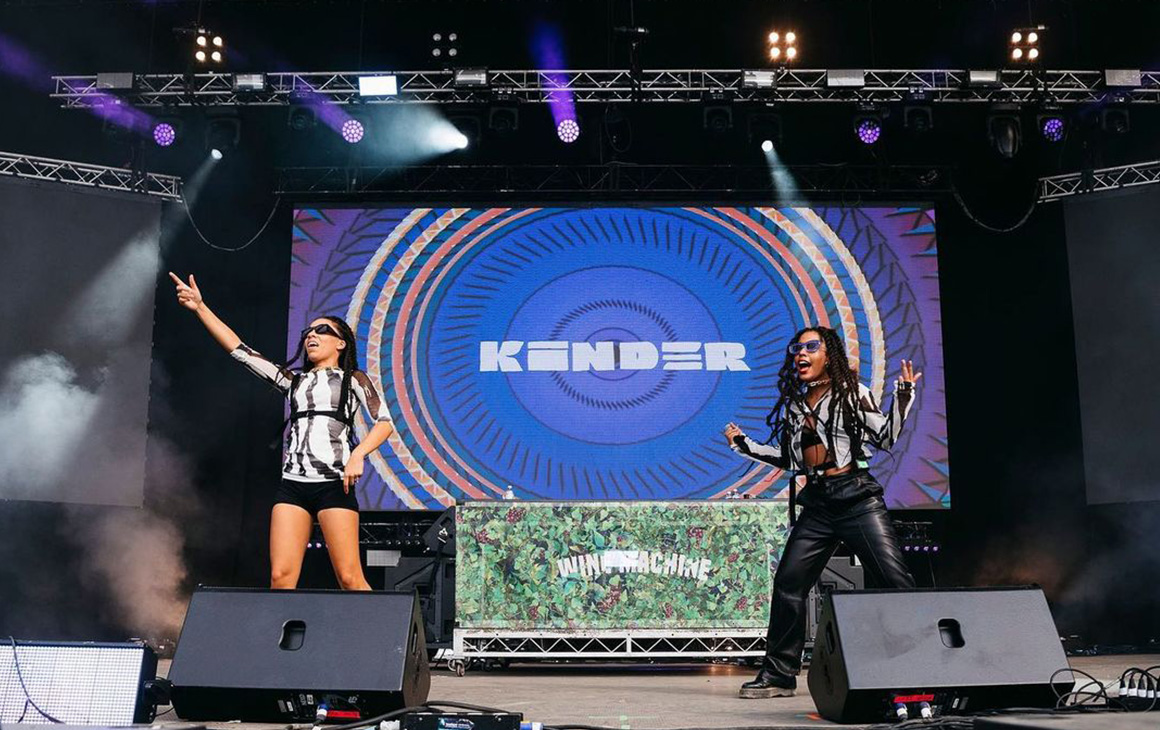 How do you both recharge creatively?

Briony: We have really learnt to find balance within all areas of our lives. I think before the pandemic we were SO focused on our music, it was all we could think about and it actually wasn't very healthy. I think now just hanging out with our friends and family is a good reset.
Savannah: Being in nature for me is a big one. I find when I'm by the ocean I just feel realigned and then I get back into it. Sometimes I get too in my own head when I'm writing, thinking it's not good enough but going back to nature always helps me become balanced again.

Who are some dream collaborations for you guys?

Savannah: We love Sophie Tucker, Channel Trees and in Australia we're obsessed with Golden Features.
Briony: I mean I would love to work with Lorde.

Last question, what’s coming up next and when is the EP coming?

Briony: Well, I don't want to jinx the EP but... later this year. That's the plan.
Savannah: We have a few shows coming up that we're very excited about.
Briony: Including doing our first big club show that will be the first time back in 18 months and we can’t wait.

Stay up to date with Kinder's upcoming shows right here.