In the 21st century, mankind stepped up to the podium with its greatest achievement to date: cafés with wifi.

Since then, offices full of desk dividers and fluorescent lighting in white walled offices have lost their appeal, and the topic of ‘co-working’ has been hot on the lips of any freelancer, self-starter, artist, or Blair, that sales rep on Level 4 who’s only shown up to work like three times in the past year.

We’ve come a long way from asking baffled baristas for the wifi password. Get ready to see sneaker-clad creatives crouched over Macbooks, because these are the Brisbane co-working spaces that’ll have you excited for the 9 to 5.

If you’re answering business calls in your trackies and your body composition is almost entirely Blend 43, it’s time to take a long hard look at yourself and your home office habits, and perhaps book in for walk through of WeWork. The international co-working icon just cranked its doors open in Sydney and Melbourne as well as Brisbane, and local start-ups are clamoring for space in the new Queen and Edward Street locations. And in case you haven’t heard of them, we’re here to tell you that the WePerks are massive. We’re talking an inner-city workspace with your very own barista-manned coffee bar, laid back lounges, and craft beer on tap. Get amongst it.

Weirdly-cheerful baristas aside, we’ve all dreaded a Monday morning or ten. Somehow, though, those post-weekend blues dissolve as soon as you step into The Cove. Dressed to the nines in Nordic-inspired décor, this dashing little number has breathed new life into the Brisbane co-working scene. Business concierge, underground parking, on-site IT technicians—The Cove’s got it all, and then some.

Brisbane boasts its fair share of refurbed warehouses, but not many have scrubbed up quite like Newstead Studios. The boutique beauty is a popular spot with photographers (holy natural lighting, Batman), but there’s space aplenty for meetings, desk time, or any business lunches on the cards. And if you’re the lunching at your desk type, Newstead Studios is also home to the ineffably addictive Loaded Food Co. Just try not to drop any salad on your keyboard.

Wifi as fast as the speed of light? Oh WOTSO, you have our hearts. A combination of soft seating spaces, phone booths and desks, this coworking space provides for an engaging yet practical place to knuckle down in. The driving force behind WOTSO is their 13 sites across Australia and one (with more to come) international location. This gives you perks like hot desking in other locations when you become a WOTSO member and they live with the belief that building the space you need is far more important that permanency. 24/7 access is given in exchange for monthly membership and you’ll also have access to meeting rooms, printing facilities and social events with fellow office space sharers. 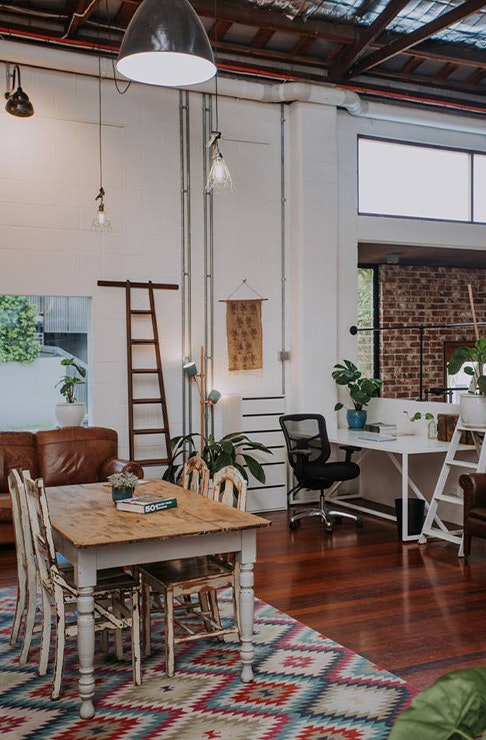 Fair warning: that ‘open-air inspiration nook’ in your garage is about to lose some of its shine. Leaps and bounds from its bustling warehouse origin, Lightspace is a sanctum of vaulted eight-metre-high ceilings and natural light. While the venue reps some serious wedding and function space cred, the entire upstairs has been outfitted as an open plan co-working space. Settle in with an espresso, sweeping city views and reveries of the private tiki bar on the deck: your lightbulb moment won’t be far away.

Uncork your bottled creativity and toss it into the cauldron of bubbling energy that is River City Labs. It doesn’t take long to see what the fuss is about, there’s all the facilities you could ever want, need or wish for at this co-working hub. Drop-in desks, available for the day, earn you access to wifi, printing and shared facilities for a cool $33, or stick around and pay by the month. From private team meetings to the biggest pitch of your career, River City has the space—and the face—to make those moments count.

Are you balancing a ground breaking start up idea with the need to pay your rent? We got you. Enter The Coterie, a space by the folks at QUT Creative Enterprise Australia. Colourful, contemporary and cheap as chips, you’ll find this little gem on the QUT Kelvin Grove campus, just a stone’s throw from the reason you’ve got a crippling HECS debt. Grab 9 to 5 access to the hot desks and facilities for just $110 a month, or bump it up to 24/7 for a permanent desk to call your own.

After a quick jaunt around the premises, the only prospect left unspoken at Prospect Studios will be whether they’ll let you move your whole bedroom in (it’s a no-go, we asked). This is the CEO of co-working spaces, so strike while the coffee’s hot. A monthly 9 to 5 access membership will only run you $6.50 a day, and sets you up with cosy nooks, break-out spaces, an indoor garden atrium and competitive foosball table. Sound too good to be true? Just. You. Wait. Prospect is also one of Brisbane’s only pooch-friendly co-working spaces. GUYS.

Finished settling into the new digs? Set up your first client lunch in one of the best restaurants in the city.