In late Spring, 160BC, the Roman Senate met in the Forum to discuss the scrapping of the day known as 'dies Mars' (the day of Mars, or, in English 'Tyr's Day'—Tuesday) from the calendar because there just seemed to be no point to it.

Saturday night is for partying, they said, Thursday is good because you can go late-night shopping, Monday serves a purpose because everybody likes to bitch and write songs about how much of a downer it is, Sunday is for afternoon sessions at the beer garden and barefoot bocce... And so on and so forth. But nobody could really pinpoint what Tuesdays were supposed to accomplish.

Discussions dragged on for two weeks in the Comitium, with speakers from far and wide offering up opinions on the topic, and the conclusion was that the Tuesday was just no darn good, and needed to be eliminated from the week. But, just as the relevant parchment was about to be signed, a senator from provincial Portugal, a laconic fellow known as Lucius Appuleius Saturninus, spoke up.

'How about youse make Tuesdays the day for discounts. Like for pizza delivery joints and restaurants and two-for-one theatre shows and that.'

And how they rejoiced at this idea! The motion was passed immediately and straight away a festive period began, full of honeyed wine and mirth, as the Romans celebrated the rebirth of that most useless of days.

So that's why Tuesday is, like, the day for discounts.

Here are some of Brisbane's best: 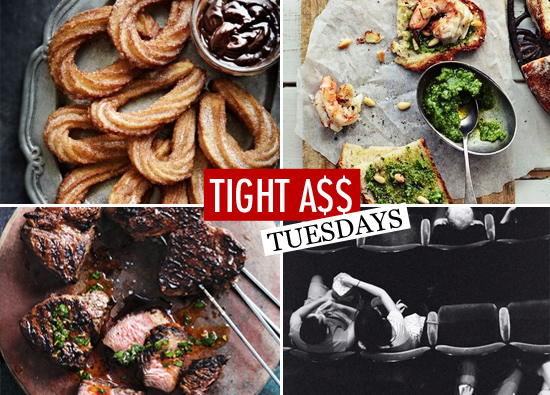 There are a bunch of two-for-one movie deals around the place on Tuesdays. Problem number one with that is that some of us don't have friends, so what good does an extra movie ticket do? And the major cinema chains charge so much for a regular ticket that 'two-for-one' still ends up being quite expensive (I remember when I could take the whole family to the Saturday matinee for two shillings tuppence etc etc). At the Blue Room Cinebar, though, you can see a movie any time on Tuesdays for just a 'heeler'.

Five tapas is a lot of bang for your fifteen bucks so this is a great option for groups of friends partaking in a few drinks on a Tuesday afternoon/evening. It's cheap enough that when you've polished one batch off, you can always order another. You don't actually get to choose what tapas you get, but the fact that they're brought out in tower form makes up for that. You'll feel like the King of Siam when that tower comes out. Believe me.

Two For One Twosday | Gertie's Bar and Lounge

For $22 you can get yourself two Peronis and two tapas at Gertie's. Nice way to kick off a casual date, right? You're welcome.

What a clever idea this is. No, not the tight-ass Tuesday thing; that was the Romans, we've already been over that. But the way they do it at The Moray Cafe is to offer one price, $13, for every item on their menu. Superb! So if you've been eyeing off that grain-fed rump steak with red wine jus for a while but didn't want to shell out $26 for it, head in on a Tuesday and you'll pay half that.

'I'm hungry and depressed.' This sentence is one of the most common uttered in Brisbane on Tuesday at about 5pm. The Boundary Hotel in West End has found a way to solve both those problems. Free entry to see local and interstate comedians to make you happy and half priced meals to fill your belly. Deals like this are why Tuesday is the new Hump Day.

TUL Note: After a six-year stint as a freelance journalist in Buenos Aires, Daniel is back in Brisbane to find that his knowledge of Argentinian football is of little practical value here. Luckily, his other areas of expertise, such as eating food, drinking wine, and writing about it, are applicable across most cultures.