When Stokehouse Q announced it was permanently closing its doors a few months ago, it was a shock to all of us, but none more so than the team of staff who suddenly found themselves out of work. For ex-executive chef Ollie Hansford, sommelier Aleks Balodis and drinks slinger Stephen Overty (who left Stokehouse a few years back, but remained good friends with the duo), it was a case of one door closing and another door opening, as they decided to put their redundancy packages to use by teaming up to open their own restaurant.

Officially opening in Teneriffe next week, Tuesday 17 November, Siffredi’s is the result, a cheerful, tongue-in-cheek spaghetti bar with a heavy emphasis on top notch wines. Taking over the space that was formerly home to the short lived Havana Bar & Dining, the trio didn’t have to put too much work into the vibing pastel pink and dusky green venue, instead dedicated all their energy to coming up with a funky concept, creative menu and stellar list of wines. 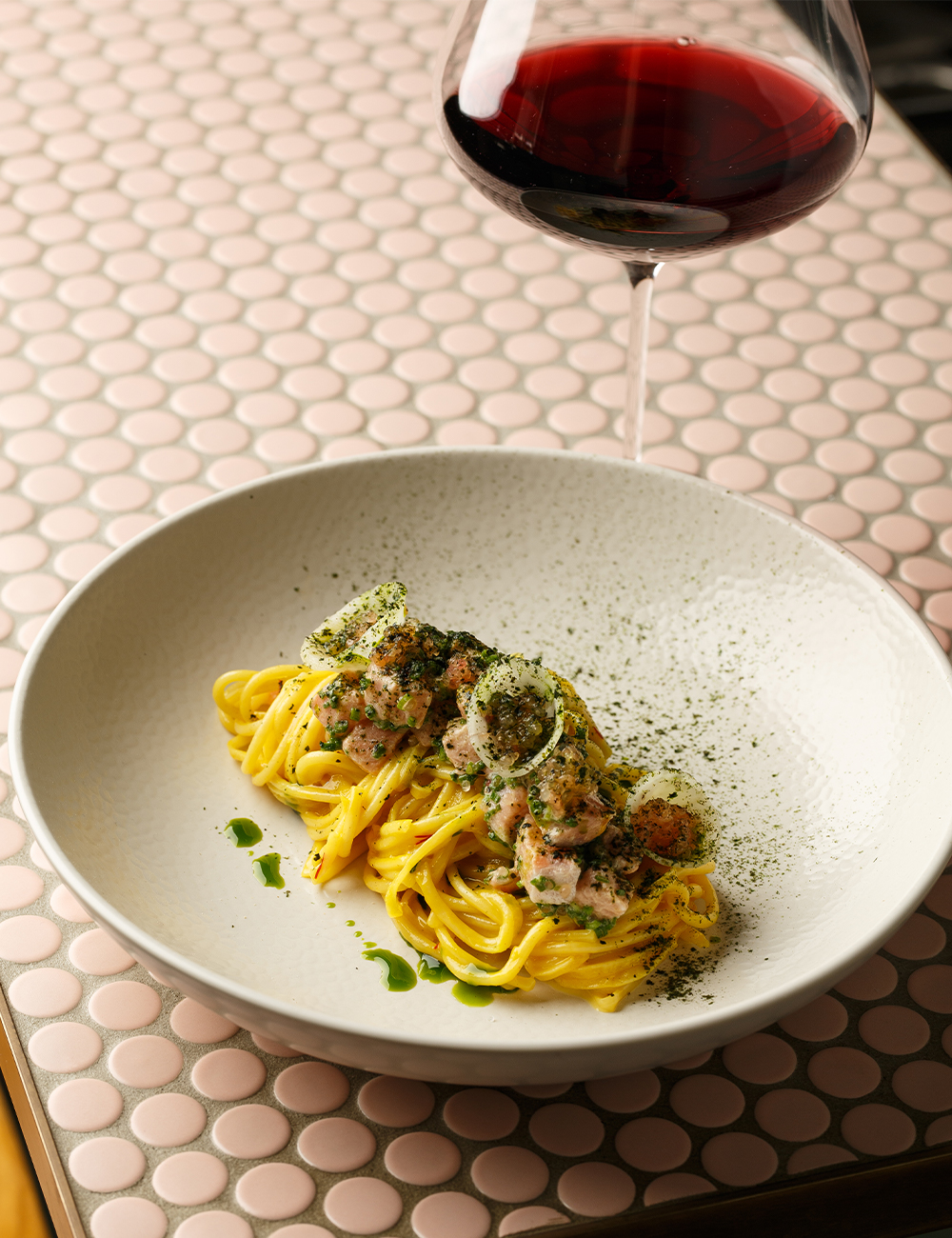 As Balodis puts it, the new venue is kind of a ‘gap year’ for the fine dining crew—because Siffredi’s is everything Stokehouse was not. Behind the bar, a pink neon sign beckons you in from Vernon Terrace, with quirky prints from an artistic friend of the team on the walls. There’s a limited amount of bar seating inside, with a view into the kitchen where Ollie Hansford will be whipping up carb-laden bowls of goodness, while the rest of the seating is outside on the deck. Take note of the framed award hung above the wine chiller just inside the door too—Stokehouse Q’s name has cheekily been crossed out and replaced with Siffredi’s, because let’s be honest, it was Balodis’ win, really.

On Hansford’s creative and decidedly un-Italian menu are five spaghettis and four snacks, but don’t settle on a favourite right away, because though there will be two or three signature dishes, the rest of the menu will change on an almost weekly basis. For now, they’re opening with small bites of prosecco and finger lime oysters, Danny’s bread with whipped almond butter and cured meats with pickles, while the first bowls of spaghetti coming out of the kitchen will be tossed in chilli and chicken bolognese sauce with broad beans and crispy skin; champagne lobster and pumpkin seed pesto with stuffed zucchini flowers; and braised beef tongue with shiitake mushroom, pickled radish and crispy pasta. Hansford might even bring your order out himself—the boys are keeping the team small for now, so you’ll find all three of them at the helm on a daily basis. 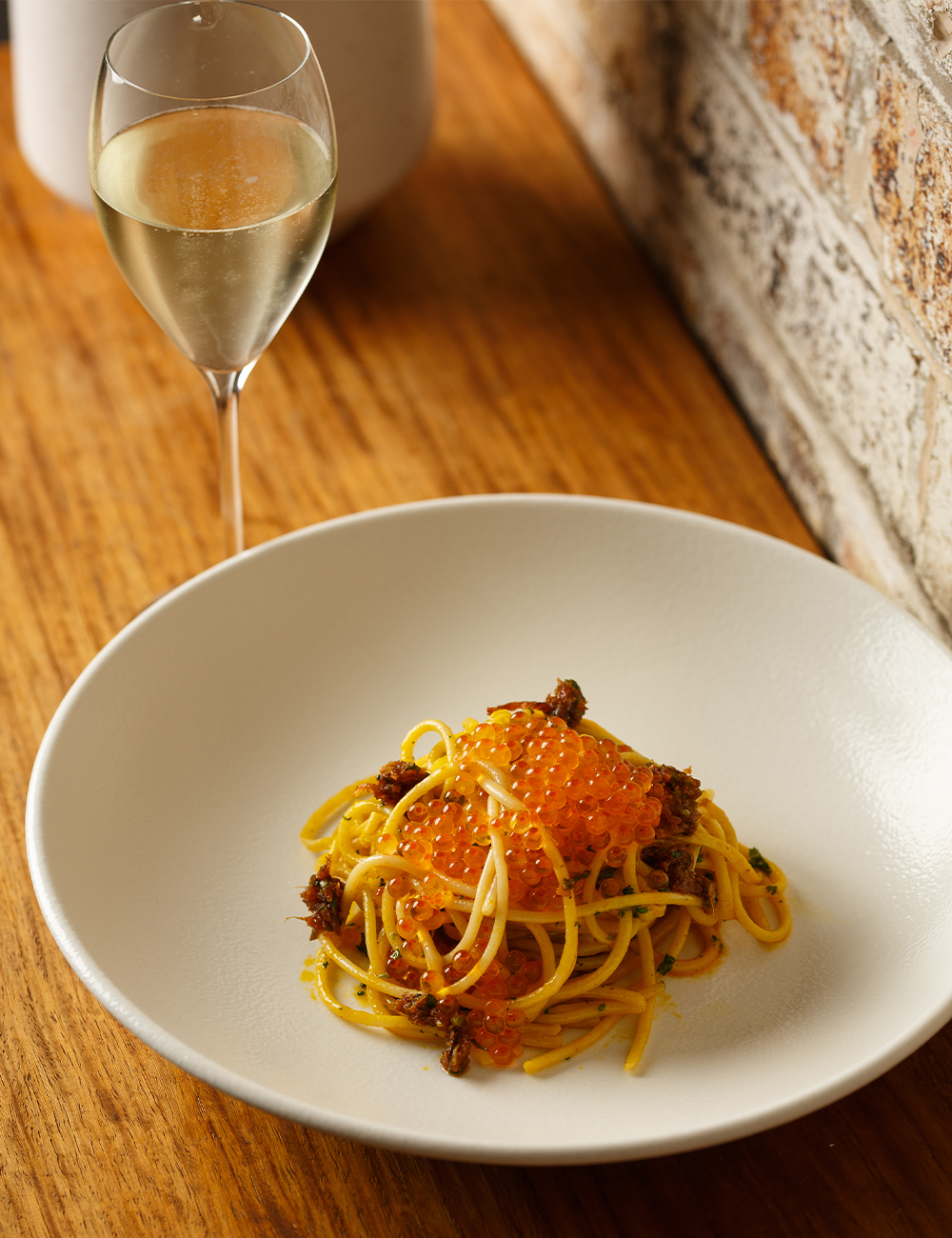 As for what you’ll be drinking, with Balodis tinkering on the ever-rotating wine menu you can expect good things, but there’ll be no need to spend up big—though if you want something special you can ask for the reserve wines, or scan a QR code on the menu to scope out a secret wine list. There’ll be a handful of beers plus a rosé spritz and espresso martini on tap, with just a couple of classic Italian cocktails to sip—a negroni, Americano and Aperol spritz.