It's that time of year again. Bust out the Mariah Carey playlist, slap on a (seasonally inappropriate) Christmas sweater, load up on eggnog and mince pies and pause your cheesy Christmas movie binge-fest courtesy of Netflix, because it's time to head out to find Brisbane’s best Christmas lights for 2021.

Whatever suburb you’re in, however far you’re keen to travel (or not), there’s a street packed with blinking LED goodness ready for your gawking, and we’ve driven the streets to find some of the best. Start planning your route, because these are the streets to see.

Did we miss any? Send an email to editorbne@theurbanlist.com with the address and an image of any houses you think should be on the list and we'll scope them out. We'll be updating this list regularly—the weather has delayed a few of our favourites this year. 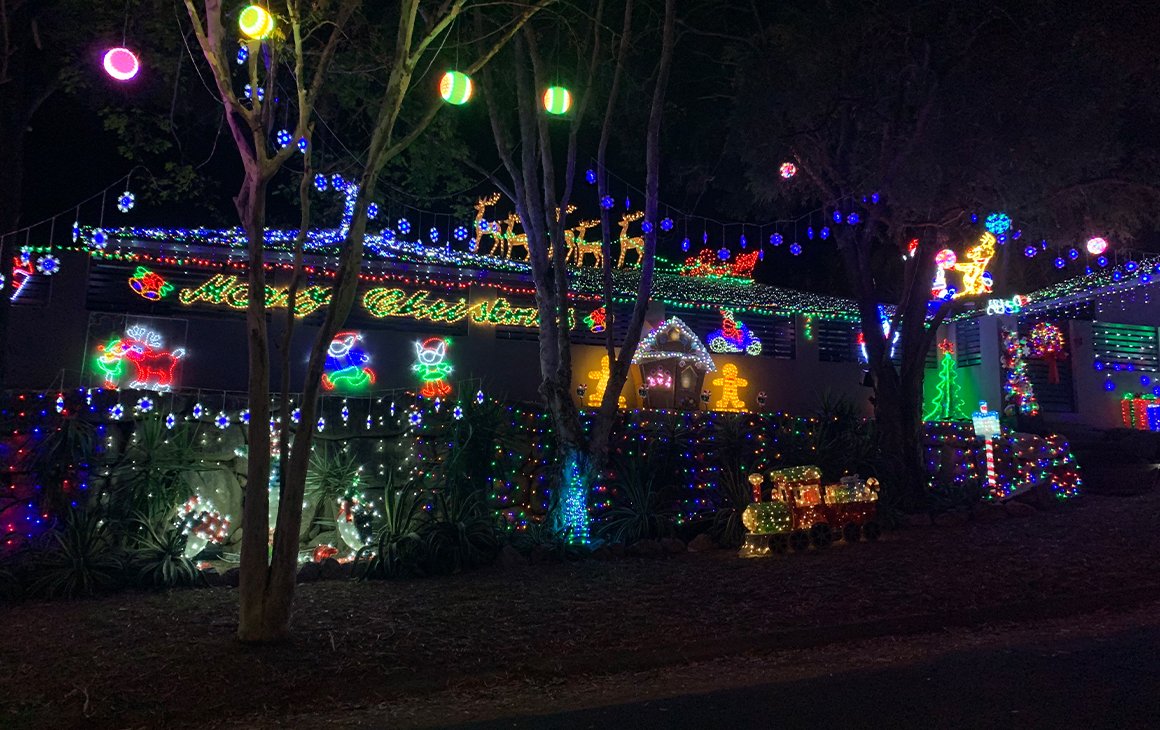 Expect seriously bedazzled windows and driveways worthy of sunglasses in Albany Creek and Bridgeman Downs where plenty of houses have lighting displays worth writing to Santa about. In Albany Creek, drive by Longreef Court and Kosta Place, while over in Aspley, Stoneycroft Street is where you’ll find one house that has synced their lights to a Christmas music playlist—tune in via your radio and stay for hours. And in Bridgeman Downs, you must check out Myrtle Crescent and Myall Place—they've seriously gone all out.

George Michael educated us on the perils of giving away our hearts at Christmas but the worthy displays in this part of town would never break your heart. Head for 10 Mondial Drive in Warner and 122 Sparkes Road in Bray Park, where the name of the street is fitting for the sparks of joy flying from the well-lit house.

Over in Carseldine, 634 Beams Road is an annual favourite, and they’re back on the top Brisbane Christmas lights route for 2020. Paladin Place in Bald Hills is another must-visit for Brad’s Xmas Lights, an epic synchronised light show set to music (this one won't be turned on until 10 December). If you’re heading that way, we also hear that you’ll find brilliant displays at 6 Topham Street (who've even set up a photo booth), 72 Gawain Road and 30 Greenore Street, though we’ve yet to lay eyes on these for ourselves.

Unwilling to drive more than 20 minutes? We feel you—although heading way out to the ‘burbs definitely holds the highest reward. But there are a few displays closer to the centre of town that are just as illuminating, especially those at 27 Minimine Street in Stafford, 202 Flockton Street Everton Park and 48 Daisy Street in Grange.

You'll want to stop and stay a while at 33 Parker Avenue in Northgate—lights, music and visuals combine here for a traffic stopping show (seriously, you can watch it here). You'll find more dazzling displays at 4 Huron Street in Banyo.

Not grouped together neatly but no less worthy of inclusion are the displays you’ll find at 36 Sugarloaf Street in Wavell Heights (it’s a doozy) and 86 College Way in Boondall.

Tee up the Michael Buble for drive to 101 Kempsie Road in Mount Gravatt where you’ll find a Christmas light display that is surely visible from space.

The south side has definitely stepped it up this year, and is worth a drive down the M1. If you head for 6 Alrak Avenue in Browns Plains, 5 Clabon Street in Hillcrest and 5 Gregory Close in Drewvale , you’ll find the lights worth the trip.

The Logan ‘burbs are probably going to see a spike in electricity usage this month, with multiple houses across the area putting on epic displays. They need to be seen to be believed, so just plan a route that hits 11 Lucy Drive in Edens Landing, 23 Homestead Street in Marsden and 9 Ernestine Circuit in Eagleby. 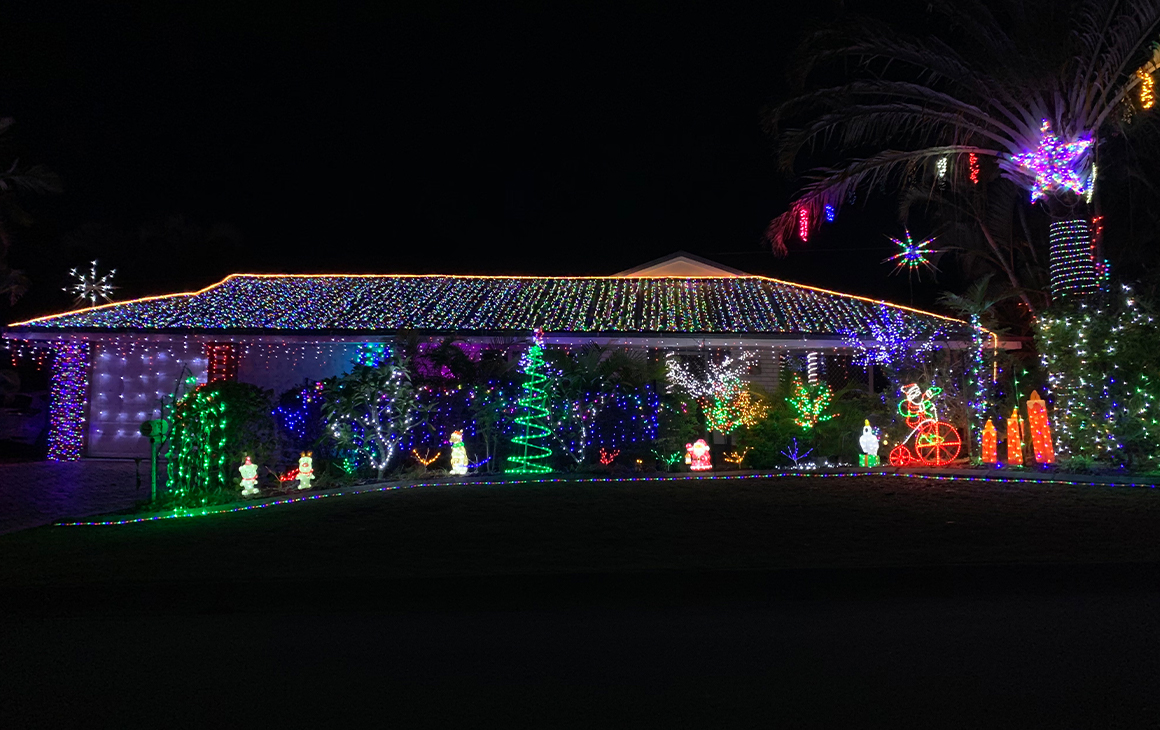 People come from near and far to see the lights displays in this neck of the woods. Spend a festive eve in Alexandra Hills’ Ashbury Court and Classic Court, where you’ll find entire cul de sacs lit up bright enough to be seen from space. Make sure you also stop by 51 Bluebell Street for their blinding display. Meanwhile in Capalaba, Tipperary Court is the place to be, and you’ll probably find half the neighbourhood there mesmerised by the multiple light displays any given night before Christmas, if they’re not at 27 Greenfield Road, which has a light display synchronised to music. Oh and if you head just a little further east, you’ll find 6 Bainbridge Street East in Ormiston worth the detour.

Well ho ho ho, Redland Bay residents go all out for Christmas and we are here for it. If you’re short on time, Huntly Place is the place to be, with over half a dozen houses competing with each other to be the best of the best.

The inner east side has well and truly joined the Brisbane Christmas lights party in 2020, and you’ll find festive displays at 60 Harris Street in Hawthorne, 7 Merry Street in Bulimba and 81 Stephens Street in Morningside.

Baysiders, you are one truly lucky bunch when Christmas rolls round—the east side really goes to town with their decorations. You’ll find blinding displays at 19 Nemarra Street in Wynnum West and 62 Annette Street in Tingalpa—but if that’s not enough for you, just keep heading south.

Nothing can prepare you for the kaleidoscopic light overload at 1 Moncrieff Court in Mount Ommaney, a local favourite (and soon to be yours). Charge those phone batteries because we guarantee you’ll be on the ‘gram religiously. On your way out, stop at Everard Street in Westlake for a whole row of festivities and both 18 Mankinna Street and 20 Curragundi Road in Jindalee. Nearby in Middle Park, 4 Burwick Close is also worth a pitstop for their synchronised light display.

Brisbane's best Christmas lights are fun, but cooking Christmas lunch isn't. Here's 15 restaurants that are open on the day and will do the cooking for you.