Alright, NSW’s best country pubs. The rules are, if it’s got VB on tap, a gravy-loaded schnitty worth your weekly calorie intake and an alfresco situation to boot—we rate it.

Country pubs are the bee’s knees and it’s not just because they know a thing or two about plating up wholesome feeds. It’s because they ooze that all-Aussie no-frills air you simply can’t dig up anywhere else. They’re all about supporting local producers, brewers and musical talent plus, they never fail to reel in a crowd that serves up some solid bants.

Jump in the car, here are the best country pubs in NSW.

Located within Brunswick Valley, The Nudge is an absolute institution, and its bar and beer garden have undergone some solid refurbs to keep the early 20th Century vibes. Back in the day, this goldy was the local watering hole for farmers, timber-getters and construction workers, and you can expect the same no-frills situation to be hammering away today. The beer garden is the place to be with wide open, grassy spaces, fairy lights and “The Shed”—the pub’s resident live music pergola. You’ll also find killer schnitty and schooners specials for $20 every Monday and Wednesday. 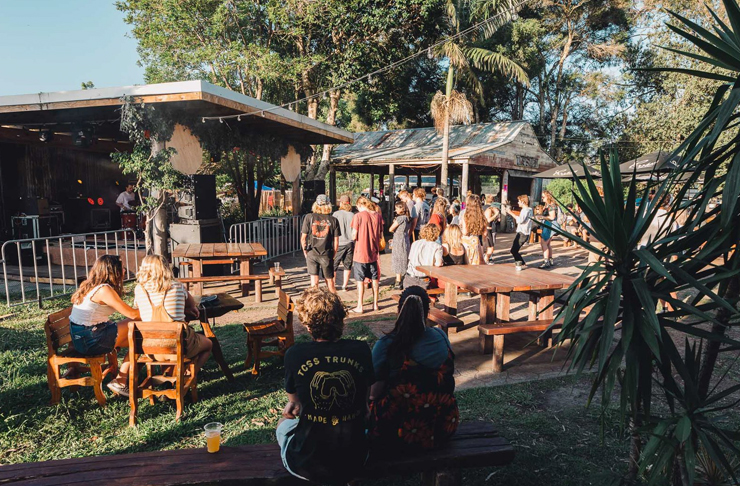 The Settlers Arms Inn is as much of a pub as it is a historic site. Built from convict-hewn sandstone, this country pub is surrounded by mountains next to the Macdonald River. She’s a bit of a destination pub, only accessible by driving your car onto the river ferry, but she’s so very worth the adventure. The beer garden involves a bit of dirt in your shoes and the food menu is never really the same with fresh produce brought in throughout the week (however, you will find some staple pies, tarts, cakes and scones every day, all of which are made on-site).

You’ll find this mega pub at the end of Mullumbimbi Street in good old Brunswick Heads. It’s a mecca for live music up this way and has been since it was built back in 1884. Known for its laidback “caravan beer crowd”, the vibes at Hotel Brunswick go off and you can expect to leave this joint with few more mates than you went in with. There are a few bistro-style spaces to settle into here, like The River Bar with 16 beers on tap and views of the Brunswick River, and the River Room, with even more local and international beers on tap. On the food front, you can hit anything from pappardelle pasta and soft shell tacos to gravy-loaded schnitty or cheeseburger sliders.

To top it all off, Hotel Brunswick also keeps a “charity tap” that pours the new Hotel Brunswick Classic Brew and sends 100 percent of the profits to a worthy cause. The summer ale has been hand-crafted at Seven Mile Brewery and uses all-Aussie ingredients with a mild bitter finish of hops, malted oats, tropical fruits and citrus. 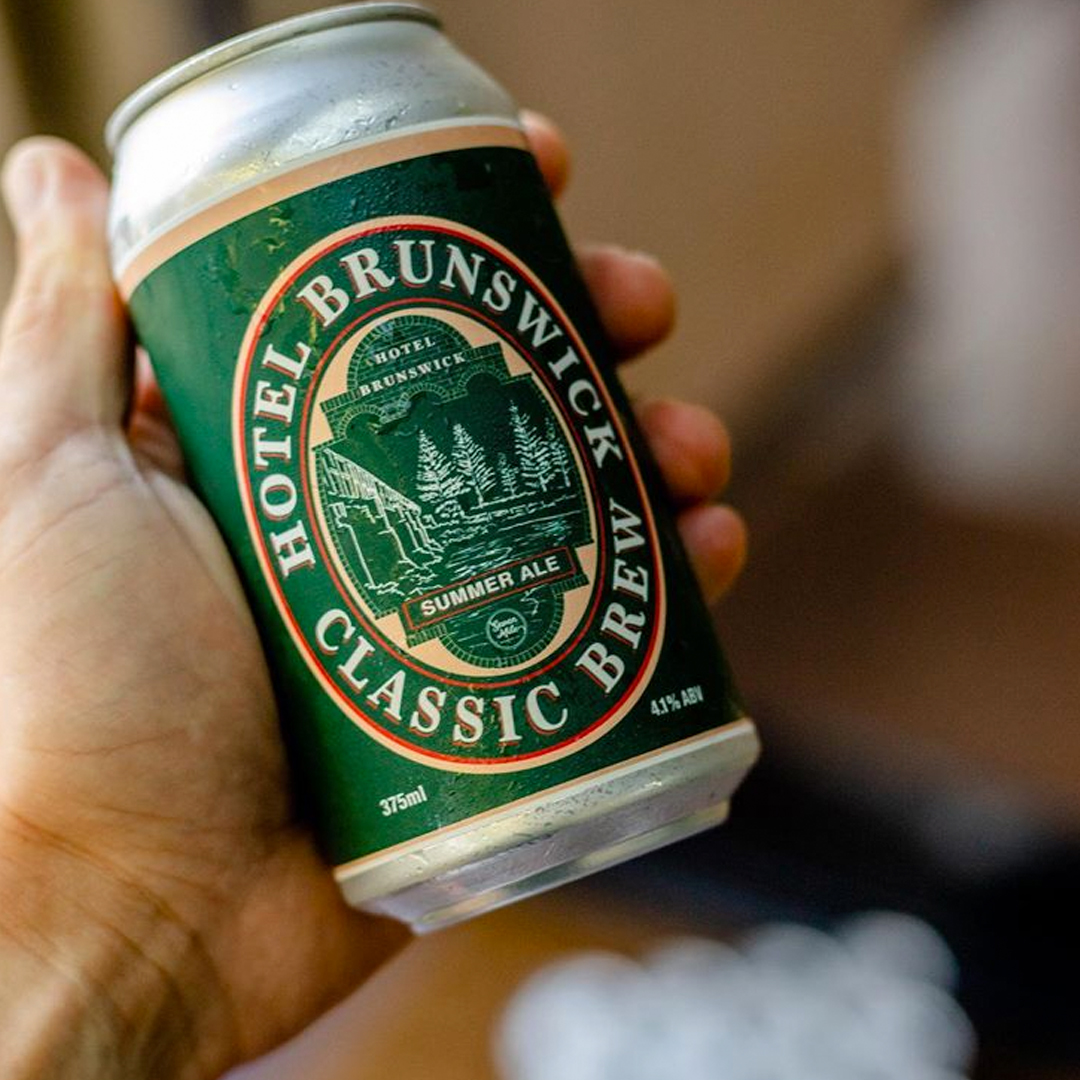 For big river views of the Nambucca River, a wrap-around verandah and an impressive reno of its 1880s-era facade, Mackville’s Star Hotel is an icon. This riverside pub is known for its pontoon and jetty (so it’s a popular pitstop for boaties and houseboats), as well as its fern-filled courtyard and the pavilion-syle beer garden. The “star” menu item goes to the succulent baby back pork ribs cooked for 24-hours. These beauties get smothered in a spicy watermelon BBQ sauce and yeah—we had never heard of that combo before either.

For the ultimate outback pub vibes, look no further than the trusty, rusty Packsaddle Roadhouse. He’s been dubbed a “diamond in the dust” and lies almost 200km north of Broken Hill sporting a bar, dining room, a beer garden and even some on-site camping if you’re keen. Decked out with corrugated iron, monster kegs, fairy lights, and hanging cowboy hats and boots, you’ll feel like you’re in the middle of a Clint Eastwood movie. No surprise, it’s all about rump steak, T-bones, grilled feeds and schnitzels here, with a solid slew of tasty meat pies as well. 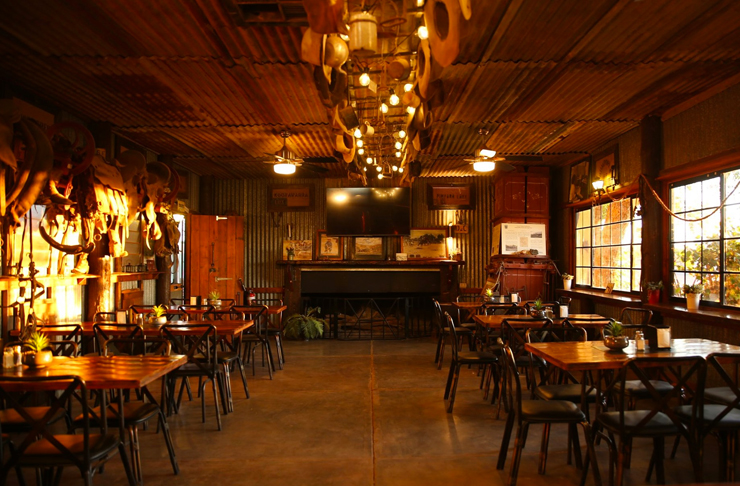 It really doesn’t get more country than The Burrawang. Surrounded by stunning grounds and views of the Southern Highlands, The Burrawang is a firm favourite with locals and Sydneysiders hitting the Highlands for a weekend escape. The food game here is pretty unmatched with a long line-up of essential pub specials like “2 for 1” Mondays, $15 schnitty Tuesdays, $15 pork ribs and rump Wednesday nights and, the magnum opus of all feasting—$1 oyster Fridays. 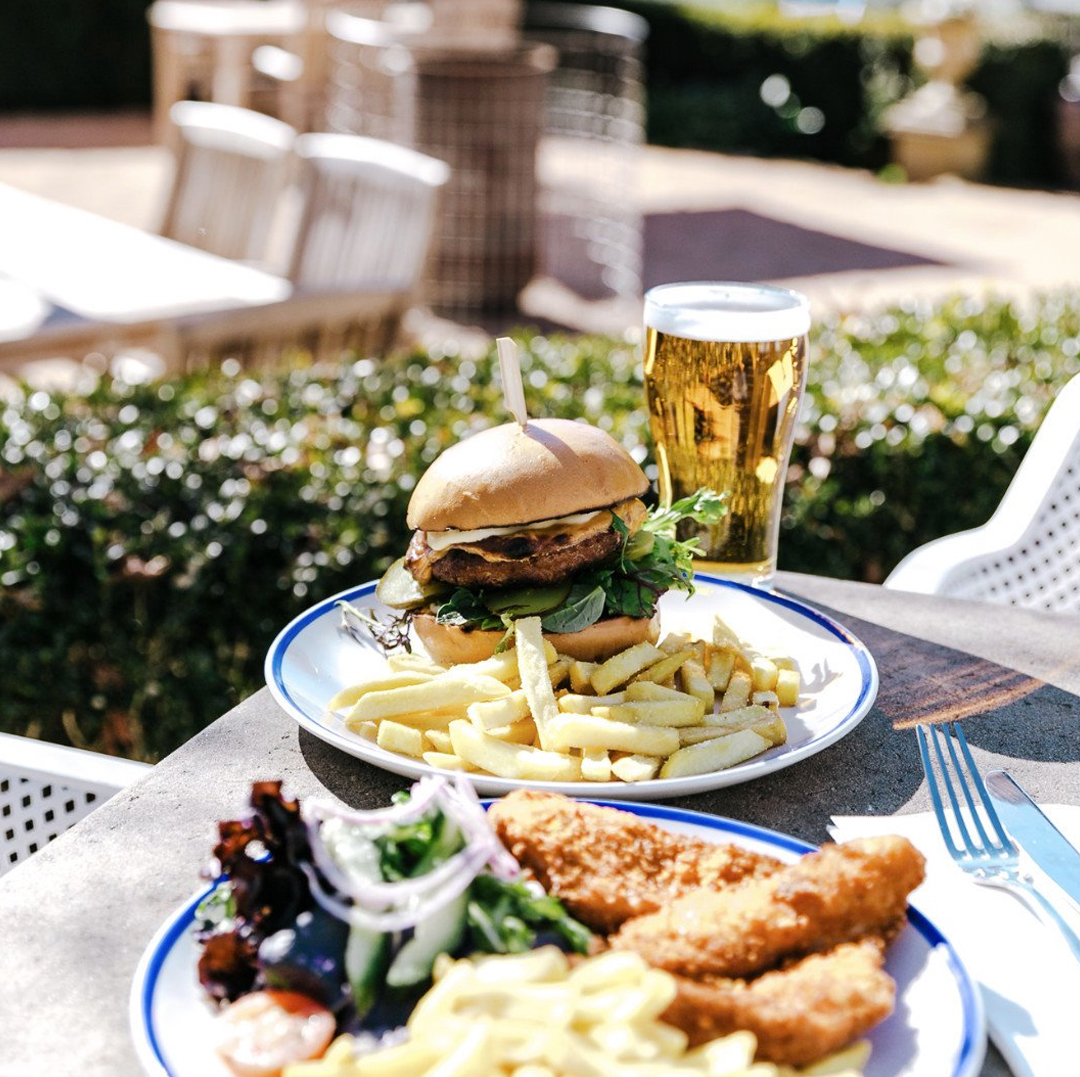 The Friendly Inn is one of the oldest pubs down yonder and boasts solid views of the Valley and a menu of top-notch favourites like seafood platters, hefty steaks and crunchy schnitzels. There’s a lot to explore here, including a family bistro with soft shell crab burgers, an open-air beer garden, a bottle shop (who knows when you’ll need to stock up on beer, wine, spirits or ice) and a full-service bar open seven glorious days a week.

A bar, a restaurant, a cafe, an artisan bakery and a homewares store—there’s a lot going on at The Sir George. However, all you really need to know is that no matter what time of the year you hit this country pub up, the beer is always cold, the wine list handpicked and the cider is always crisp. You can knock back a couple of frothies at the Pheasant (front bar), or delve in deeper to theLadies Lounge or Whisky Lounge. The menu covers off all sorts of feeds, like lamb kofta, house-smoked ocean trout rillette, a side of royal blue potatoes and Swiss chard with chickpeas, charred pumpkin and celeriac mustard.

As for the bakery, brace yourself for the most famous sourdough in the region (famous for its slow fermentation); sourdough doughnuts filled with jam, vanilla custard and Nutella; and an ever-changing selection of baked treats. 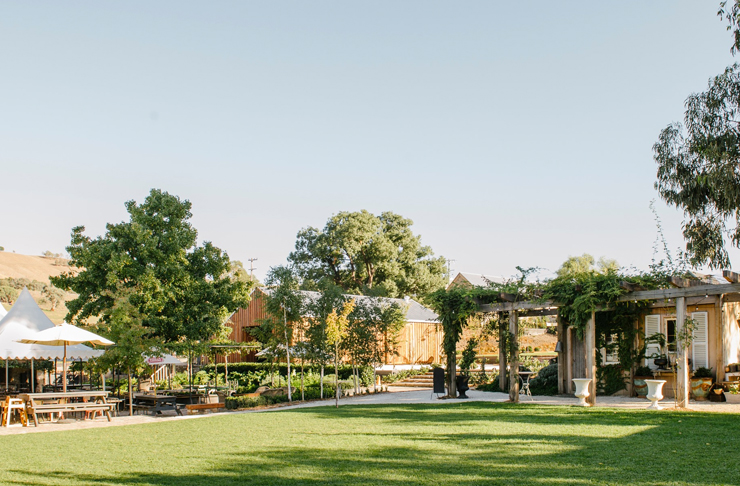 The Royal Hotel means business with a kitchen churning out any and every kind of pub feed you could dream of. Dig into a half rack of house-smoked and marinated pork spare ribs, cheesy pizza bread, sizzling fajitas, garlic herb panko crust lamb and one hell of a southern fried chicken burger (featuring maple glazed bacon, smashed avocado, slaw, greens and chipotle mayo trimmings). It’s also event central with live music gigs, themed lunches and Christmas in July celebrations.

The Silverton Hotel is Australia’s version of Hollywood. Marked by the pimped-up, black Volkswagen beetle parked out the front (a cheeky homage to Mad Max’s V8 interceptor)—this bush watering hole will bring back big film memories for anyone who has seen Razorback, Wake In Fright, The Slim Dusty Movie, Mission Impossible II, The Adventures of Priscilla: Queen of the Desert and a whole heap more (movie buffs, you need to get here, stat). You’ll be able to tab up a number of stomach-fillers here like chicken nuggets (a cruisey 60-cents each), chiko rolls, fish cocktails, Silverton’s iconic hotdog and the oozing pie, chips and gravy combo. 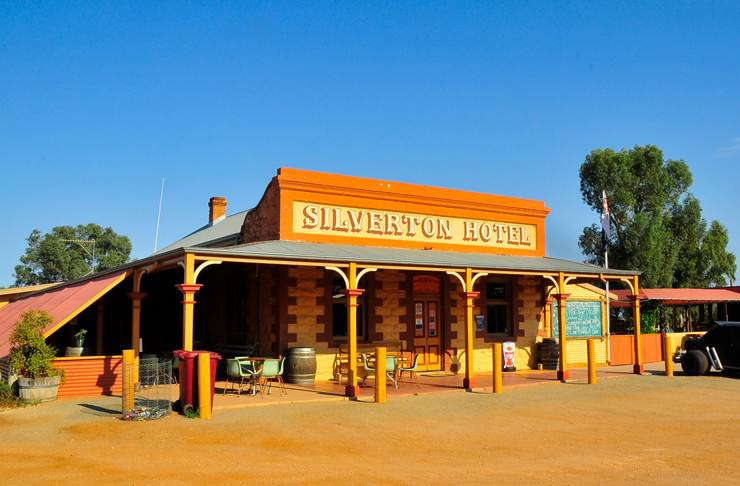 Before it became a holy site for sinking schooners, The Palace Hotel was actually a venue dedicated to all things coffee. This beautiful country pub (which you have no doubt already spotted in The Adventures of Priscilla: Queen of the Desert), is decked out in landscape murals, all of which include a body of water. Your heavy hitter feed here has to be the “Palace Burger”, a glorious stack of marinated pulled pork beef brisket with jalapeno peppers, swiss cheese, caramelised onions, BBQ honey mustard sauce and tomato sauce. 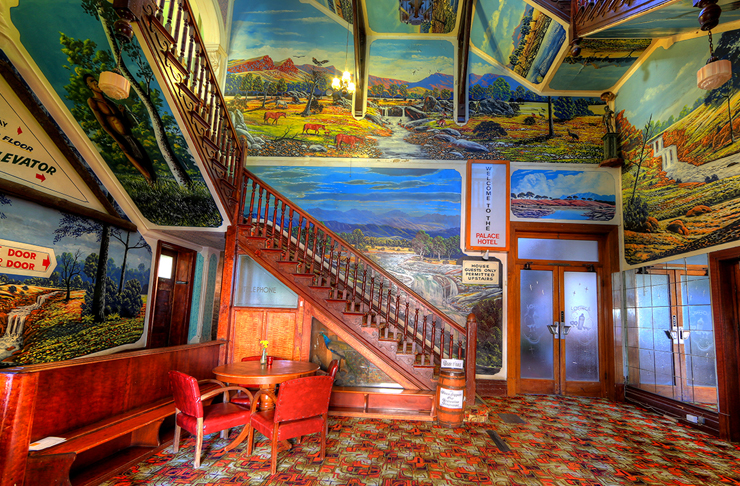 Sure, you may remember Bathvegas for the time you went gold panning there in primary school, or potentially lost your morals in the halls of the uni bar, but we’re pretty sure that once you visit Jack Duggan’s Irish Pub—that’s how you’ll remember this town. These guys have won a tonne of awards, and for good reason. Traditional pub grub meets traditional Irish fare is the go here with one of the best pub steaks you’ll ever have the privilege to order. Friday and Saturday nights are for live music, so pack your dancin’ shoes.

Looking for something closer to home? These are our favourite pubs in Sydney.