Your Definitive Guide To Sydney’s Best Pies, As Chosen By You

To celebrate our 10th birthday here at Urban List, we’re asking you to tell us your top 10 lists over on our Instagram—we asked and you delivered on where to find Sydney's best pies.

Oh, heavenly creator of puff pastry and pies. May we take a minute to thank you for everything you’ve done? Every morsel of chunky filling you’ve kept warm, before we slather it in sauce and gobble it down. Every 4am treat after a night on the schooners. And every road trip snack you’ve allowed us.

Biting into flaky, buttery crust and getting a mouthful of juicy, piping hot goodness is nothing short of heaven, especially when you do that thing where you try to keep your mouth from burning and end up just speaking with your mouth full while fanning it with your hand, but also nodding because it’s so bloody good.

Here, we’ve scoured high and low to bring you the meaty, the vegan, the gluten-free and the novelty pies that are worth the trip. Behold, the best spots for takeaway pies in Sydney.

The Best Pies In Sydney, As Chosen By You 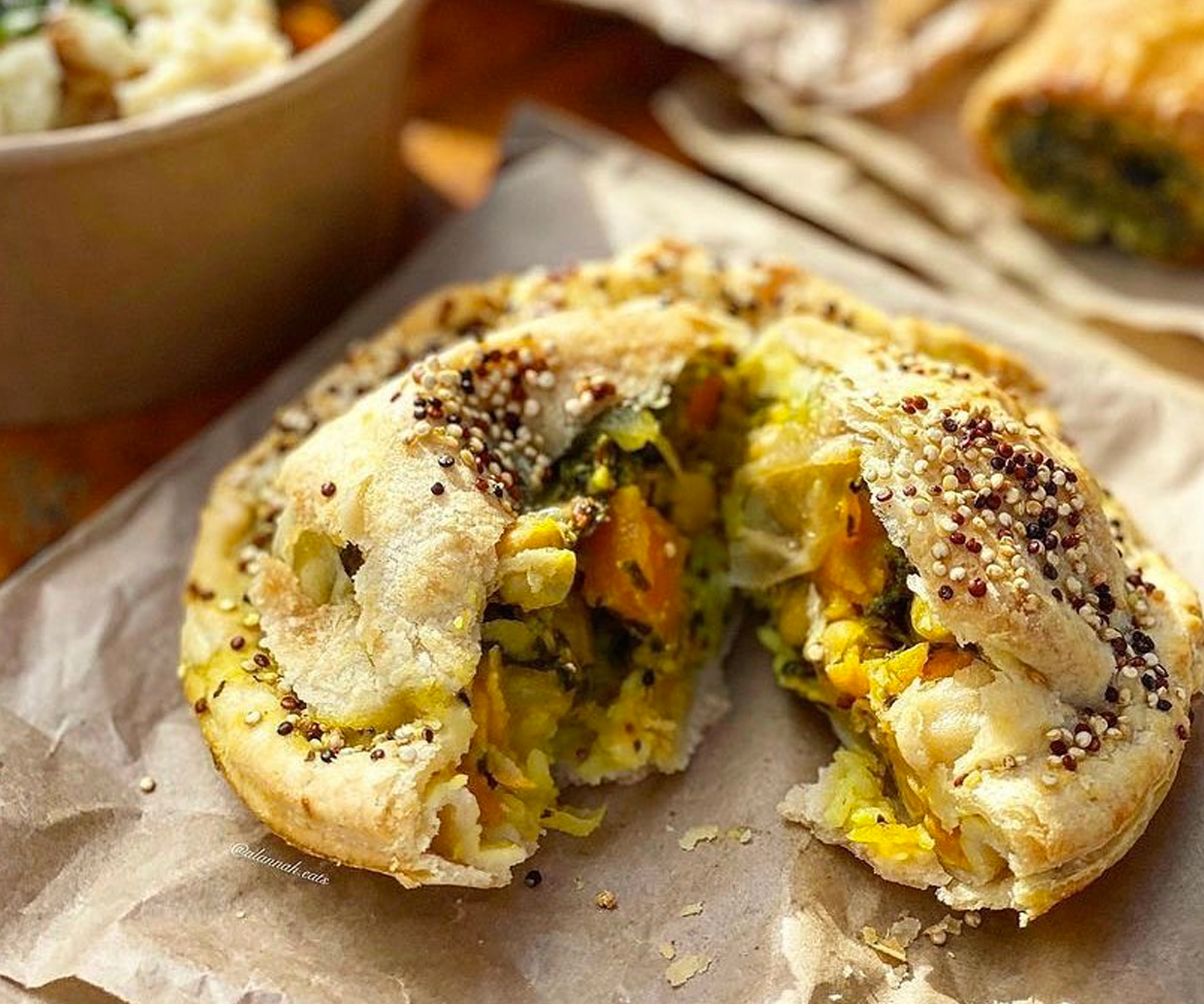 The team at Glenorie Bakery have been baking fresh and tasty pies since 1994. Naturally, the award-winning classic beef pie is second to none, but you can feel free to branch out and give the beef, cheese and bacon a go because hot dang it’s delish. And since you're here—as if you wouldn’t also walk away with Glenorie’s enormously famous apple turnover stuffed with diced apple, cinnamon and all the fresh cream. Dinner and dessert? @___annalise also says the pies here are "flakey and hearty" and honestly, you can’t beat that. 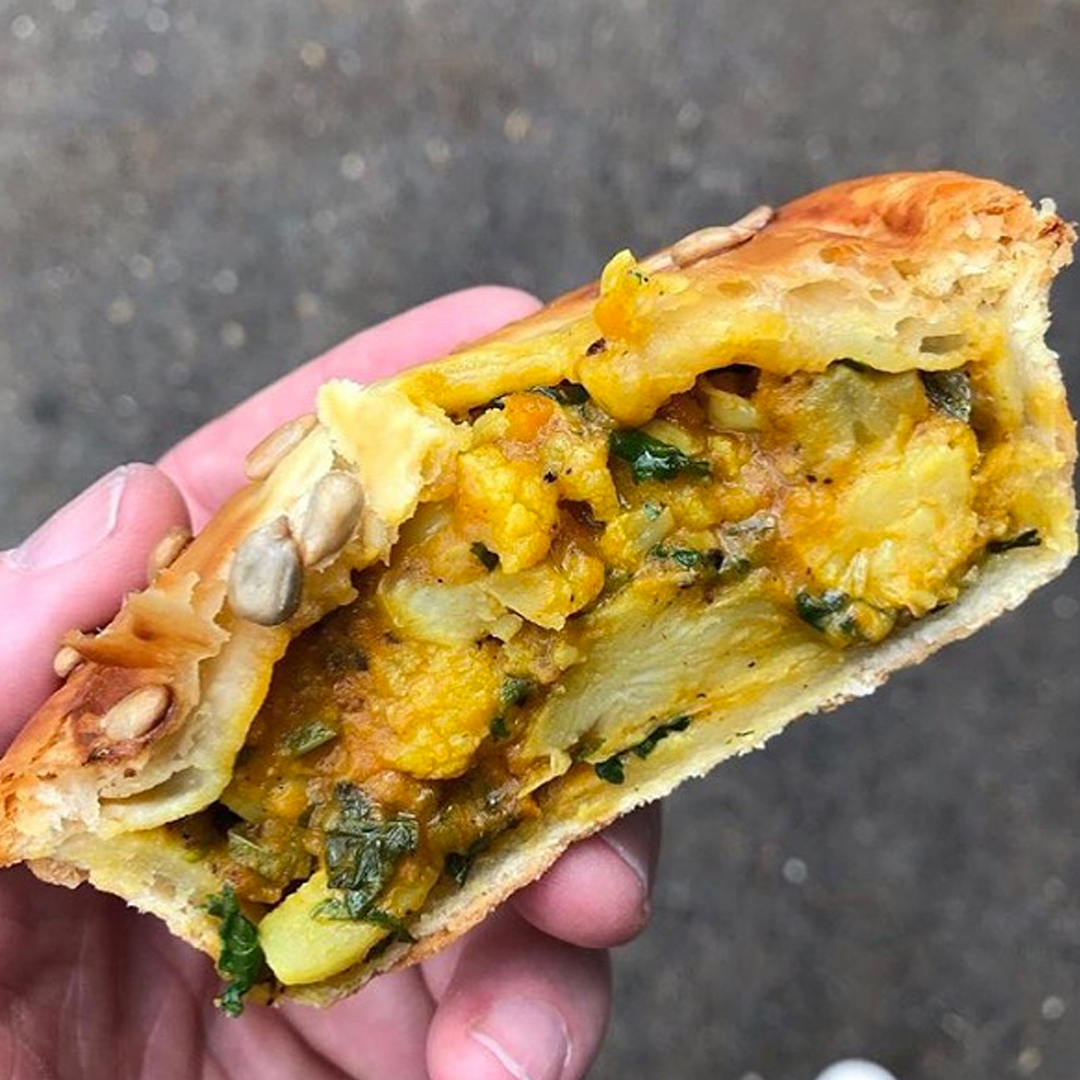 A million times yes to this Sydney institution and its wonderful pies (in fact, all of its wonderful baked goods—shout out to the pork and fennel sausage roll that holds a dear spot in every serious foodie’s heart). The classic beef will always be there for you in the tough times, packed with Blackmore Wagyu beef shin sourced from Vic’s Premium Quality Meat and pastry made with Pepe Saya's famous butter. You can also go ahead and branch out on a beef brisket, red wine and mushroom morsel, a pie—needless to say the real drool factor here is "the pastry and fillings" says @jimmymaxy. 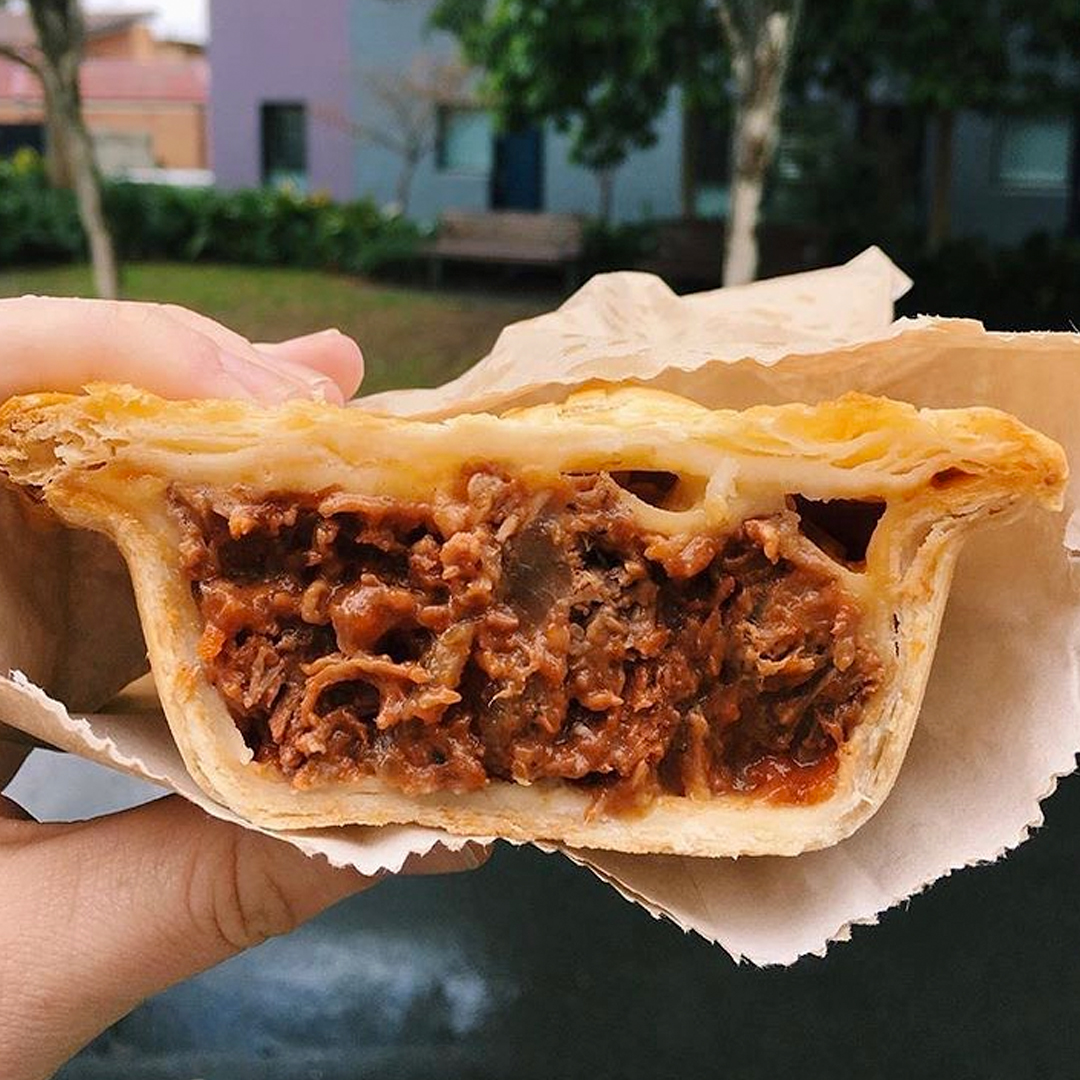 The Pie Tin does our favourite baked treats justice. All tasty morsels are hand-made on-site at the Newtown location and kept fresh in an oven waiting to be devoured. The pies are on rotation but don’t feel like you need to wait around and strike while the filling is hot, because everything is epic. Especially the Sunday roast lamb pie, which is best described with a raised hands emoji. Need more convincing? There’s an actual pie package loaded with bolognese. On top of that, @jaynuseuss says "I still dream about that pork and apple pastry paradise".

Any Northern Beaches local or general Sydney pie enthusiast knows Upper Crust Pies’ big, green and yellow sign and it's easily one of the best, backed by @elle_homeandabroad too. It beams at them as they make their way down Pittwater Road and it’s usually followed by a suggestion of “quick Upper Crust pit stop?” followed by “Yeah, nah for sure, get me a chunky beef”. Serving hot, delicious pies to lovers of all things ‘Strayan since 1948, The Upper Crust is a fast favourite among all that get involved. Hit the Mexican beef or the veggie pumpkin and never look back. 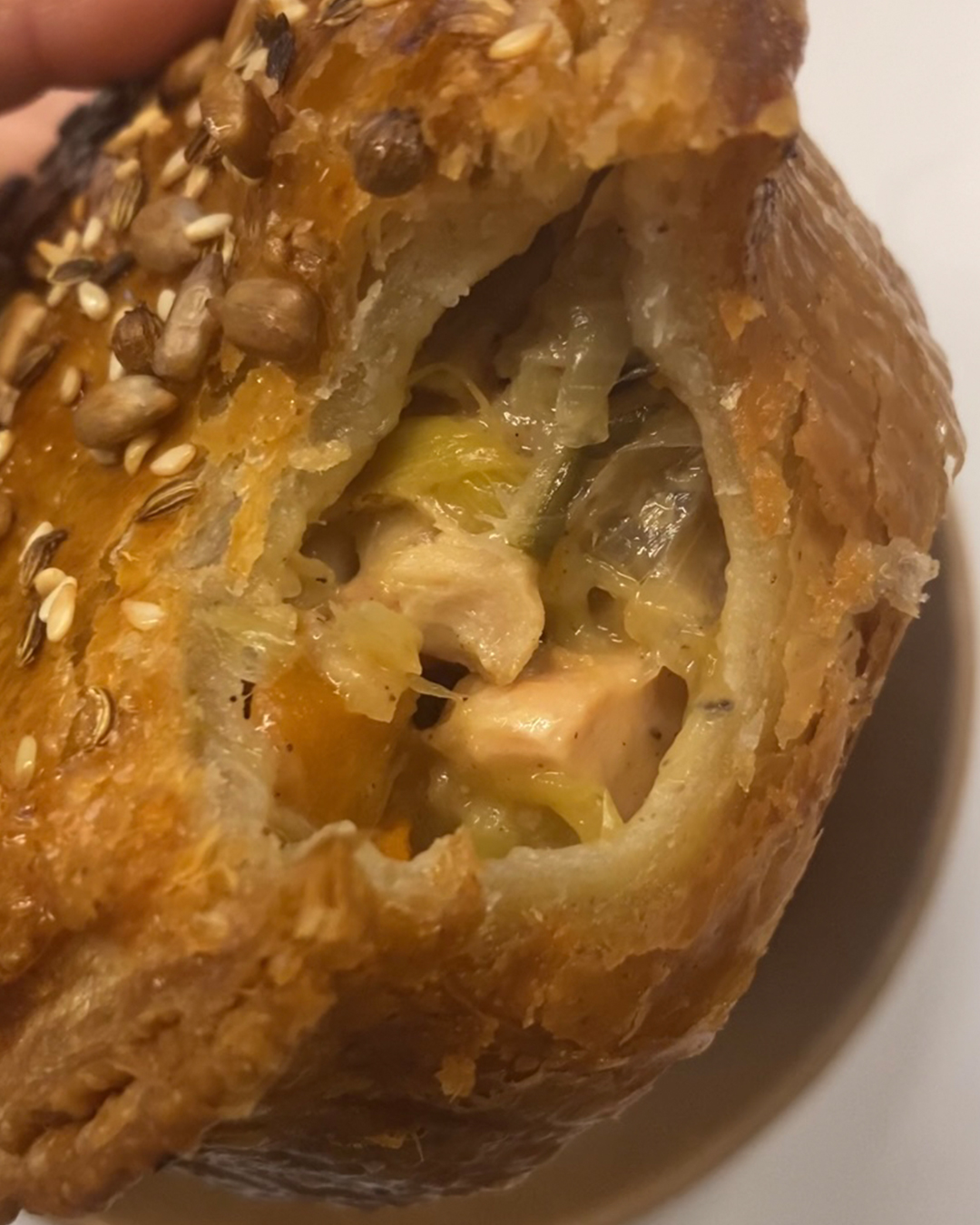 It's one of the newer kids on the block but Lode Pies & Pastries has already worked itself up to be a huge pie crowd-favourite. Offering up all things sweet and savoury, as mastered by LuMi chef Frederico Zanellato and chef Lorenzo Librino, everything here is inspired by the aesthetic of viennoiserie. With that, the art of the 'lamination' process reigns supreme here, so you can expect lots of layered treats with creams, ganache and seasonal fruit.

On the pie front, we're "chef's kissing" two main savoury celebrities here. The first is a classic chicken and leek pie with one of the most flavoursome crusts known to humankind. The second is the top pick from @bundithebus—"there's a wagyu brisket with chicken and cream glaze", followed by *loveheart* eyes. 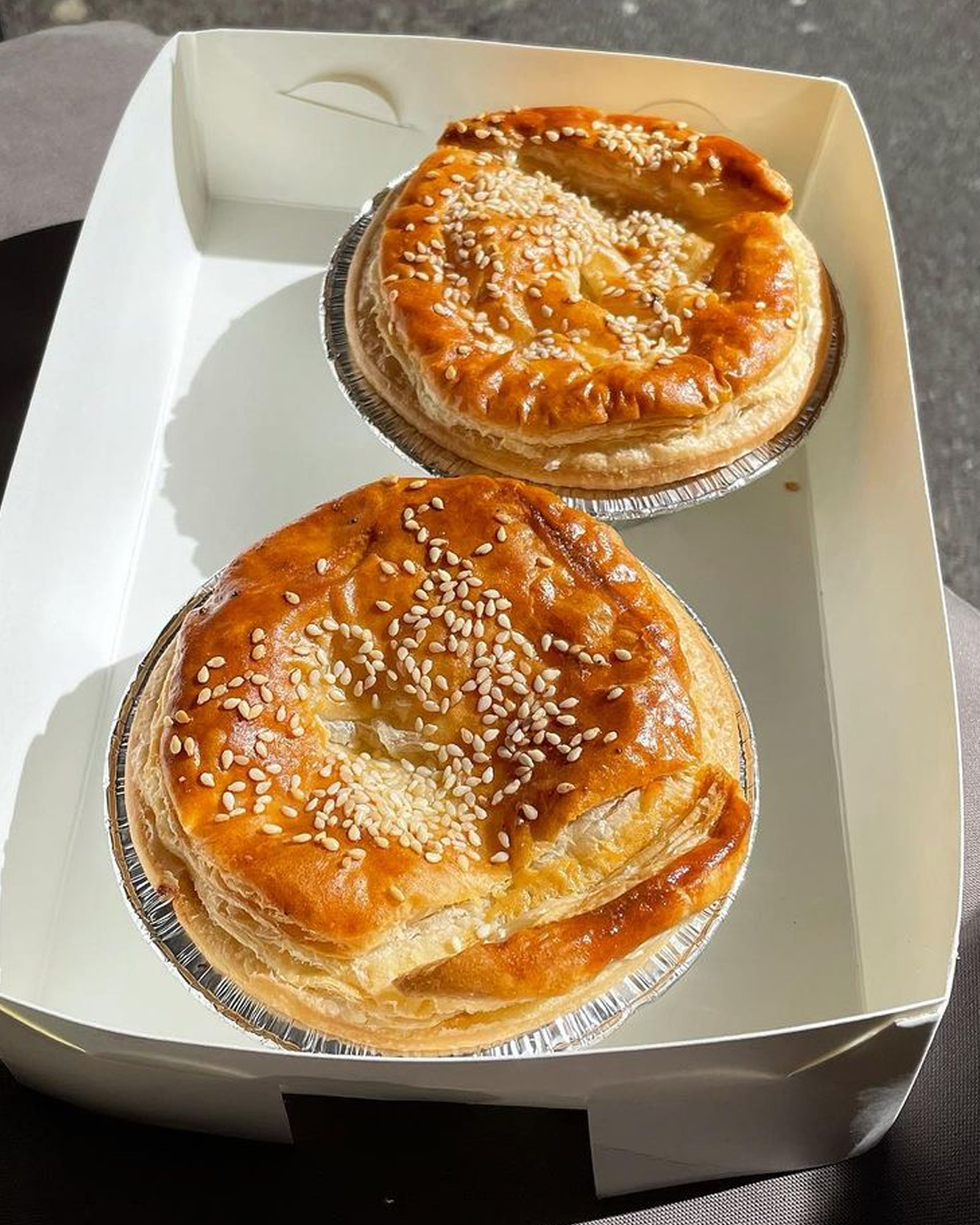 We pity the foodie fool who hasn't made their way into Cronulla's artisan sourdough bakery known as Groundbake. Here, they make all the pies from scratch with meat sourced from a local butcher—@liamfickert says it's one of the best places in Sydney for a pie and of course, we'd have to agree. The goods here look like a crisp chicken and mushroom morsel, a slow-cooked chunky beef and veggie creation and, the real MVP, a chunky beef and curry pie. 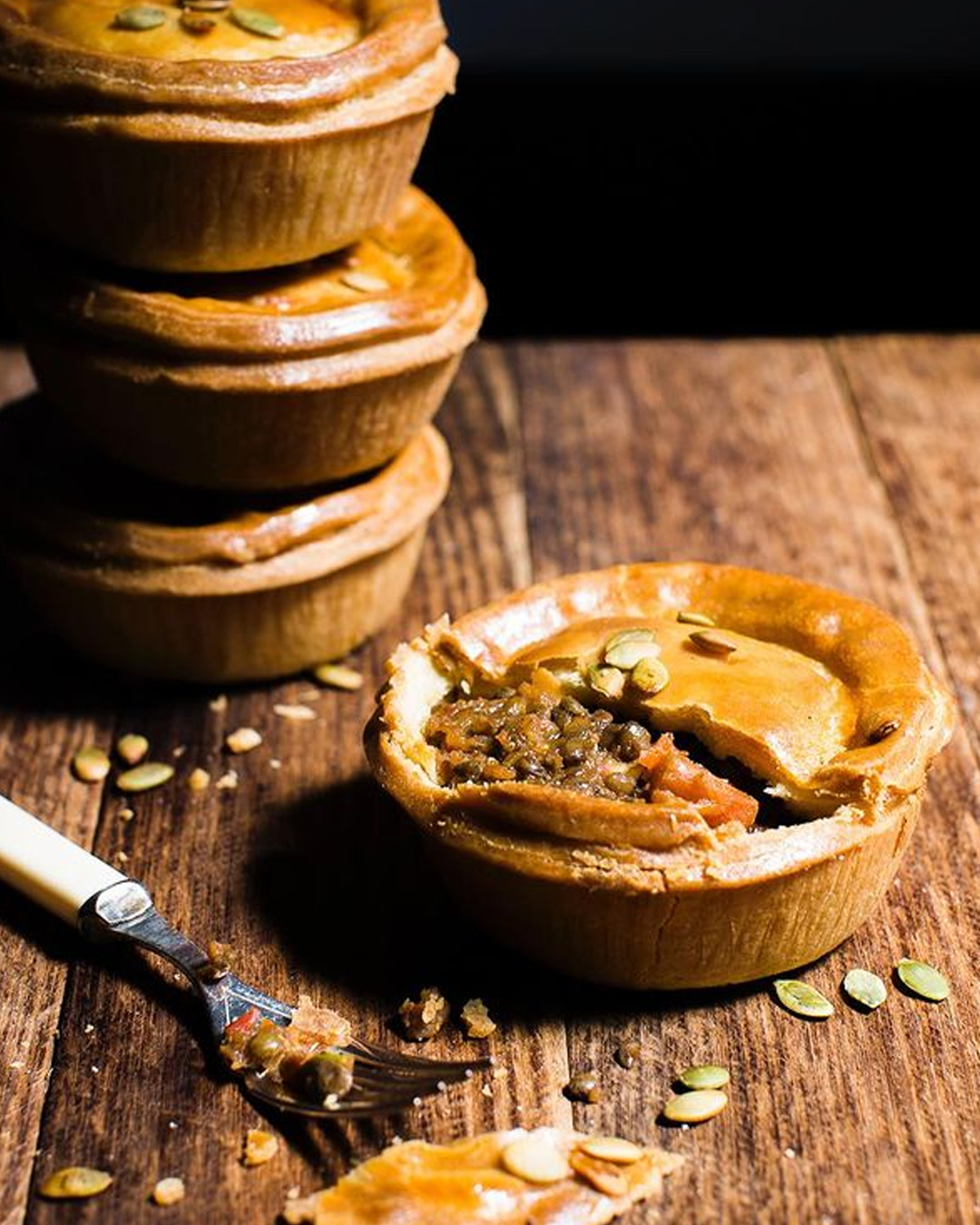 Whether you’re coeliac or just prefer a gluten-free diet, Wholegreen Bakery is your mecca when it comes to stocking gluten-free pies and @graciousness_au says they're the most "delicious" around. It would be difficult for even the most discerning wheat-devotees to fault the delicious offerings at this bakery and cafe. Owner Cherie Lyden is a qualified nutritionist who was motivated to create a gluten-free offering when her daughter was diagnosed with coeliac disease.

On the menu, there are three pies to work your way through. There's a French vegetable and lentil pie which gets simmered in a tomato base and then piled into Wholegreen's buttery crust pastry. You'll also want to draw your attention over to the chicken, mushroom and leek pie, plus a grass-fed beef and onion pie. All pies can be ordered as individuals or as a 20cm family pie.

Anything But Humble Bakery 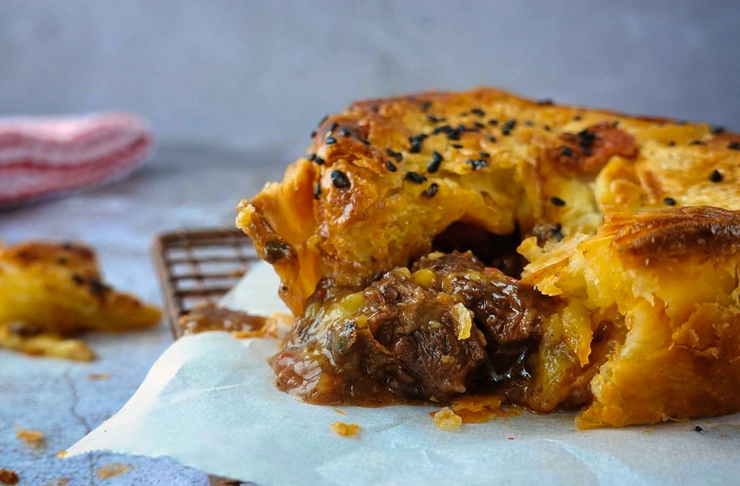 Haven’t heard of Anything But Humble? Well, listen up because you’re about to get the intel on the best pie creations in Sydney. Based on the age-old and fail-safe concept of a takeaway joint the idea behind Anything But Humble Bakery is plain and simple—you come in, pick up a bunch of pies (and sausage rolls) each weekend and get on your merry way.

@lucindaat09 says Anything But Humble Bakery does "amazing filling combinations" and they're not wrong. Stuffings look like pork belly with roasted apple, chicken and tarragon, chipotle black bean and sour cream, three-cheese cauliflower and @ambopennington says an "awesome beef habanero cheese pie that is *chef's kiss* and *loveheart eyes*".

If you’re a serious bakery bandit, you’ve most definitely heard the word that Tuga's Pastel de Nata is some of the absolute best in Sydney (the proper Portuguese name for our beloved Portuguese tarts). However, elsewhere on the menu, the team here also pump out some of the best pies in Sydney—@lucindat09 says the pies here have an "amazing pastry that's solid enough to keep it's shape when you eat it".

Dellwood Bakery is an unassuming little joint in South Granville specialising in fresh bread, doughnuts and you guessed it, hot pies. The best part here is that you don't have to sacrifice an arm and a leg for the good stuff, it's a no-frills menu with steaming cabinets of the good stuff.@chillipadiinau says "they have the best bacon, egg and cheese pie in Sydney, curry pies too!".

More Of The Best Pies In Sydney 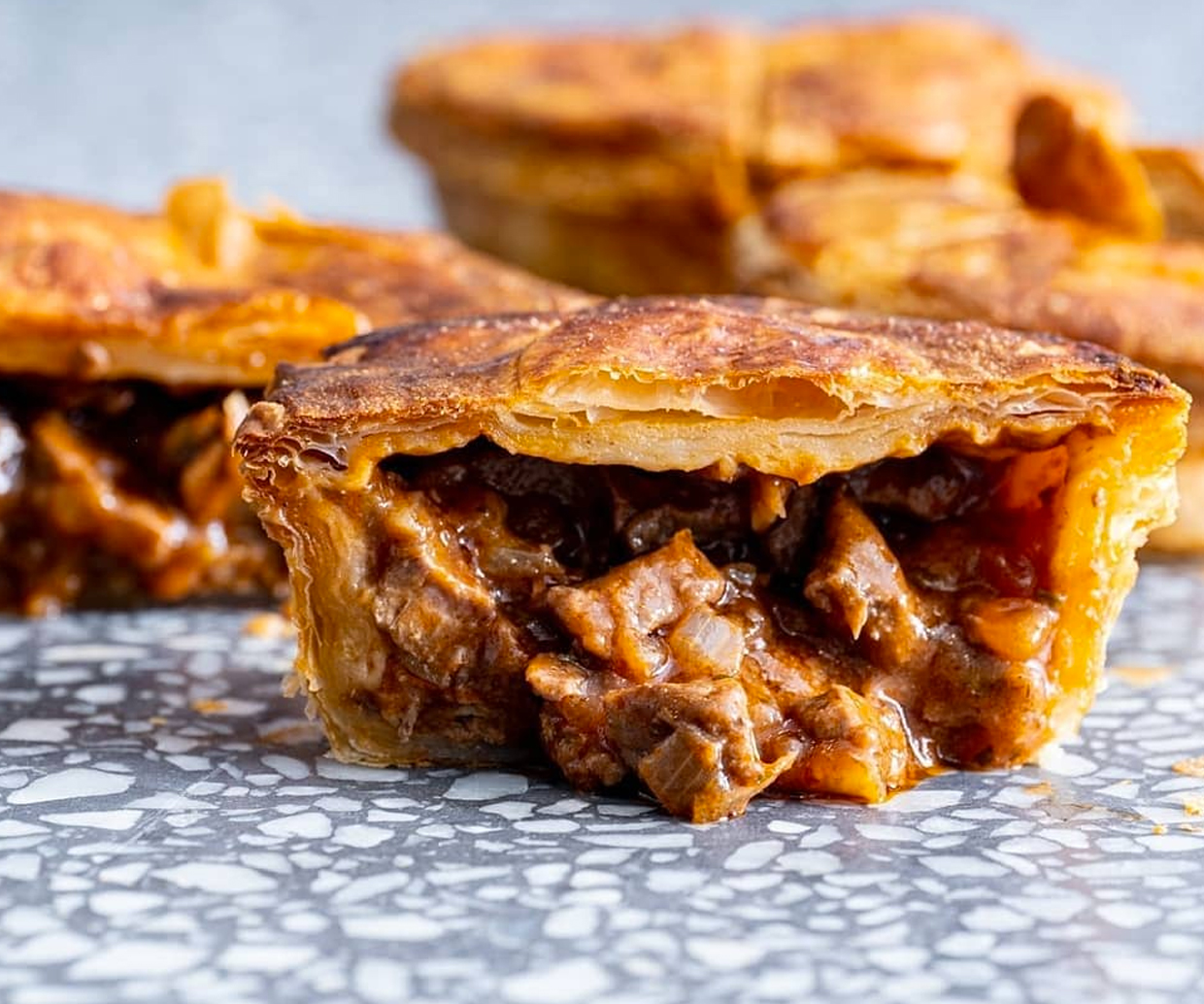 Threefold Pastry, Parramatta’s legendary bakery is open for takeaway mid-week, offering its range of freshly baked, handcrafted pastries and super chunky meat pies. If you’re all about finding a meat pie with a strong juice game, this saturated guy is the morsel for you.

It’s eyes on the pies here and honestly, try and tell us that Bellevue Cottage By Antoine’s smoked Black Angus brisket pot pie is not the god pie walking among mere mortals. The 10-hour smoked and slowly cooked brisket is served alongside summer vegetables, mushrooms and mixed leaf salad so you can, you know, get the best of both worlds.

It’s been almost two decades since The Grumpy Baker first opened its doors as a single cafe on Sydney’s Oxford Street. Fast forward to now, and you’ll find The Grumpy Baker slinging its famous old fashioned artisan sourdough from a number of bakeries across our glorious city, various markets, and in the Blue Mountains too. Each cafe houses a juicy range of pastries and muffins that get baked throughout the day as well as croissants, pain au chocolate, cheese sticks (do it), fruit scrolls, and the bakery’s dense chocolate brownies too.

When you’re ready to tuck into a meaty morsel, the pie and sausage roll game here deserves a standing ovation. The Grumpy Baker makes its very own pies with puff pastry filled with slow-braised meats and vegetables. These look like a chicken Harissa and Moroccan lamb. Our best piece of advice is to get in early, before they sell out, and nab both pies. 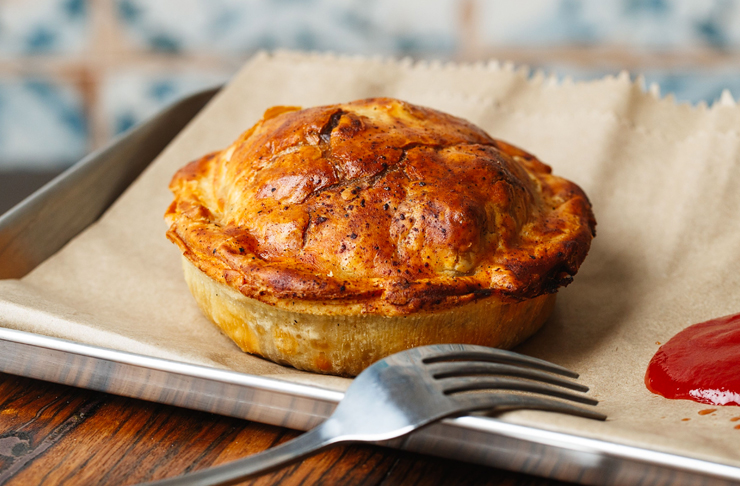 These pies are 100 per cent vegan and will cook your taste buds straight into a frenzy. Your main go-to’s here are the Tuscan mushroom pie filled with the good stuff and spinach in a creamy balsamic sauce, and the ever-iconic gluten-free Moroccan bean tagine pie loaded with chickpeas, lima and kidney beans slathered in Moroccan spices. More than just your local pie shop, Funky Pies is doing their part for sustainability by using bio-degradable packaging and fair trade coffee and uniforms. They also give away leftover pies at the end of each day. So you can feel the good karma while eating your scrumptious pies.

Do you know how long is a long time to be a purveyor of seriously delicious pies? Seventy years, and counting. This is just about how long Harry’s Cafe de Wheels has been filling the stomachs of hungry pie enthusiasts. The must-have classic tiger pie, with chunky beef, mushy peas, mash, and gravy is a testament to the hard work and dedication to pies that came from humble beginnings in a humble pie cart in Sydney, and ended up a must-visit spot for locals and tourists alike. Want to branch out? Lean beef and curry is your new best friend.

Handmade on-site? Check. Packed full of chunky, meaty goodness? Check. Flaky mess all over your top all day? Checkity check. It’s all happening at Infinity Bakery, which you’ll no doubt be able to tell the moment you catch a whiff of heavenly bready goodness whenever you’re near. Ditch your significant other because the real love of your life looks like the gooey lamb and pea pie, a golden ratio of soft pastry to filling.

Come for the jam doughnuts, croissants and date scones, stay for the Syrian chicken pie. This guy is a neat little pack of cinnamon, cumin, sweet potato, dried mint and chook and we highly recommend you grab a few extras to fuel the rest of your week. We also need to give an honourable mention to the staple lamb, potato and rosemary pie, and a sneaky shout out to the pork and caraway sausage roll. Do yourself a favour and get them all. 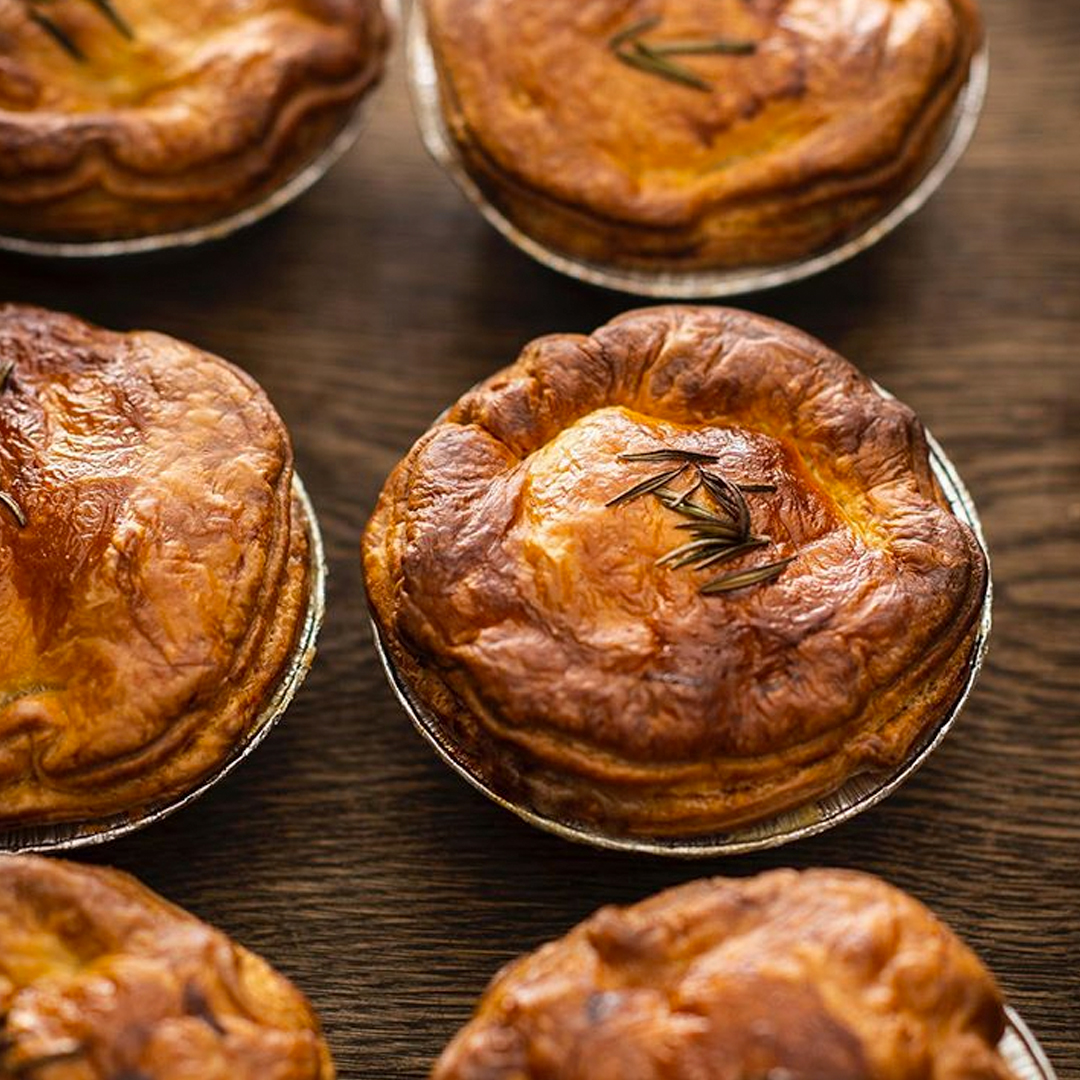 Now, check out Sydney's best Christmas markets to get into the festive season.