The 18 Best Places To Stargaze In Australia

Depending on the time of year, if you look up at the night sky in Australia you might spy Jupiter, Mars, Saturn or Venus. Maybe you'll see the Southern Cross and a smattering of other not-too-distant or extra-bright stars like Alpha Centauri, Antares or Sirius.

Australia is rich with dark places where you can be truly starstruck by the plethora of twinkling balls of gas in the sky (let’s be real that’s what they are). From the real splendour of the Milky Way, interstellar clouds, colourful star clusters and our neighbouring galaxies.

Here are the best places to go stargazing in Australia.

Milroy Observatory is located in one of the clearest dark sky zones in Australia. Run by the legend that is Donna, pending the time of the year, you’ll be able to spot nebulae, star forming regions, other galaxies, globular and open clusters and visible planets too. You can also customise your night to compliment a birthday, anniversary or any other special occasion and look, star parties are a very real thing here if you feel like winning yourself some brownie points. 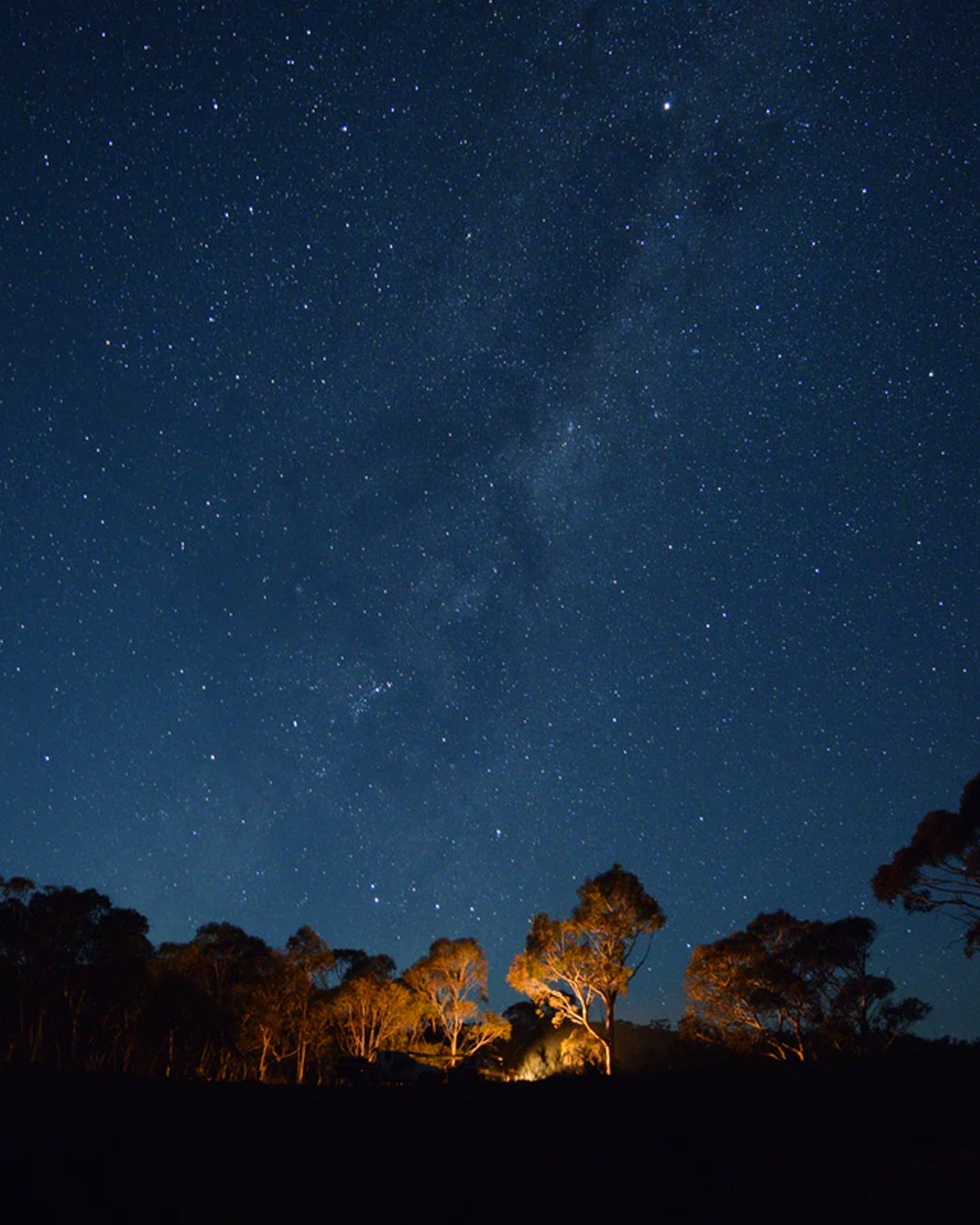 The Best Stargazing In Western Australia

By far one of the most wholesome stargazing tours in Australia, you’ll find this epic Didgeridoo Dreaming Tour in Monkey Mia. You’ll learn about local Aboriginal culture, Dreamtime stories and all about the incredible history of the Gutharraguda (the original name for Shark Bay meaning ‘to waters’) and get to soak up the ancient sounds of the didgeridoo.

Run by Clinton, a descendent of the Ngarluma and Yindjibarndi people, the Traditional Owners of the coastal and inland areas of the West Pilbara, the Ngurrangga Tours host a special ‘Staircase To The Moon Tour’ if you’re serious about soaking up some ancient astronomy. You’ll get to forage during low tide while the sun sets and be in prime view of ‘the staircase to the moon’, a natural phenomenon when the full moon rises over the exposed mudflats at extremely low tide and creates an optical illusion of stairs reaching to the moon.

With nothing but white sand to reflect the night skies, Lancelin’s sand dunes (only an hour and a half out of town) have to be one of the best places to go stargazing. Grab a board and cruise down the massive dunes by day, then kick back and enjoy the stars after dark. The perfect day right there. 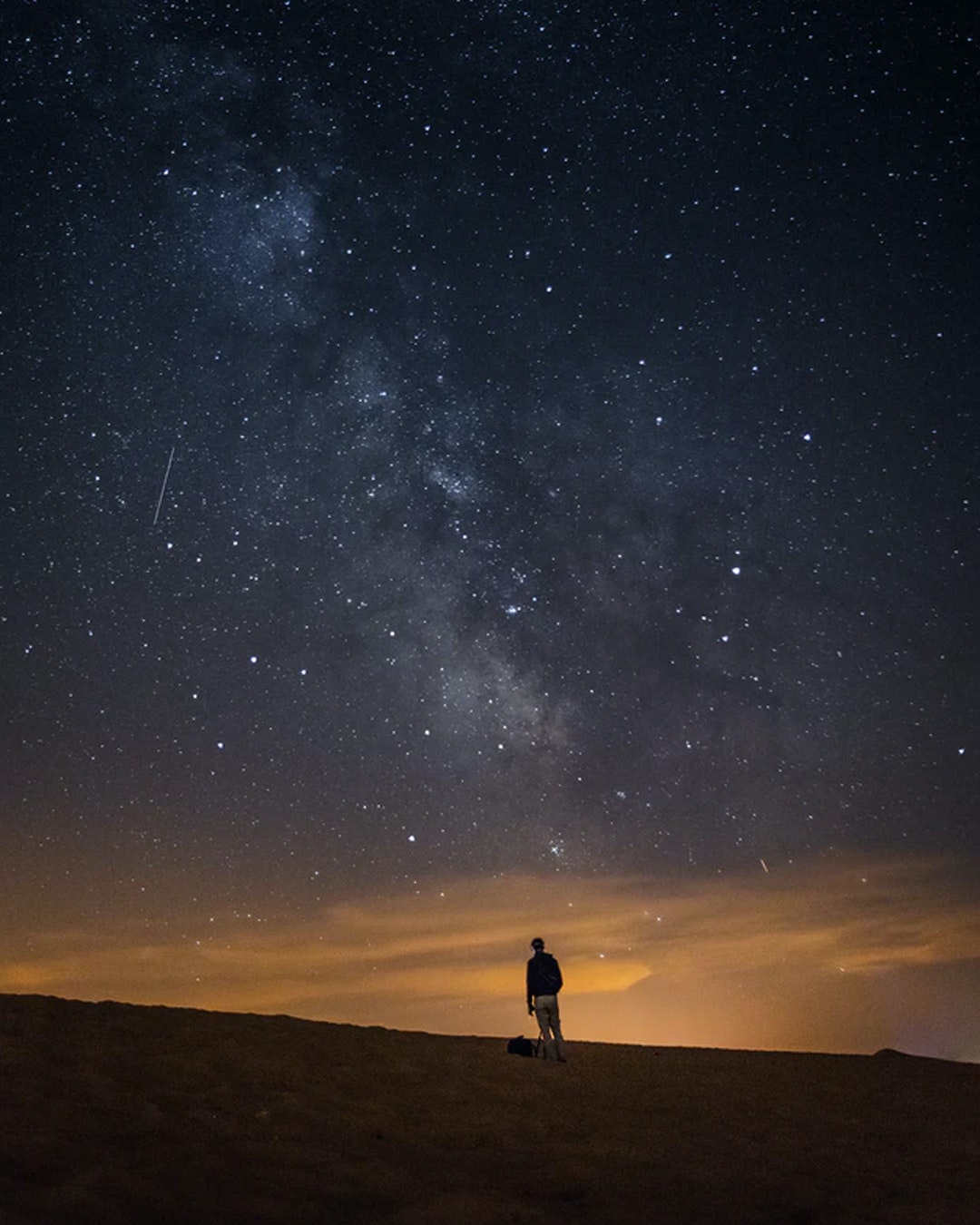 It's one of Western Australia's most famous landmarks, and Wave Rock also happens to be one of the best places to watch the sky literally explode with twinkling stars. It’s about 4-hours out of Perth, and the horizon is uninterrupted in all directions, meaning you’re in for one hell of a sky show.

Lying northwest from Melbourne is the absolutely stunning Lake Tyrrell (stemming from the Indigenous word “Tyrille” meaning sky). At this location, you’ll be able to spot the Southern cross, the Milky Way and moonscape-like terrain for days. 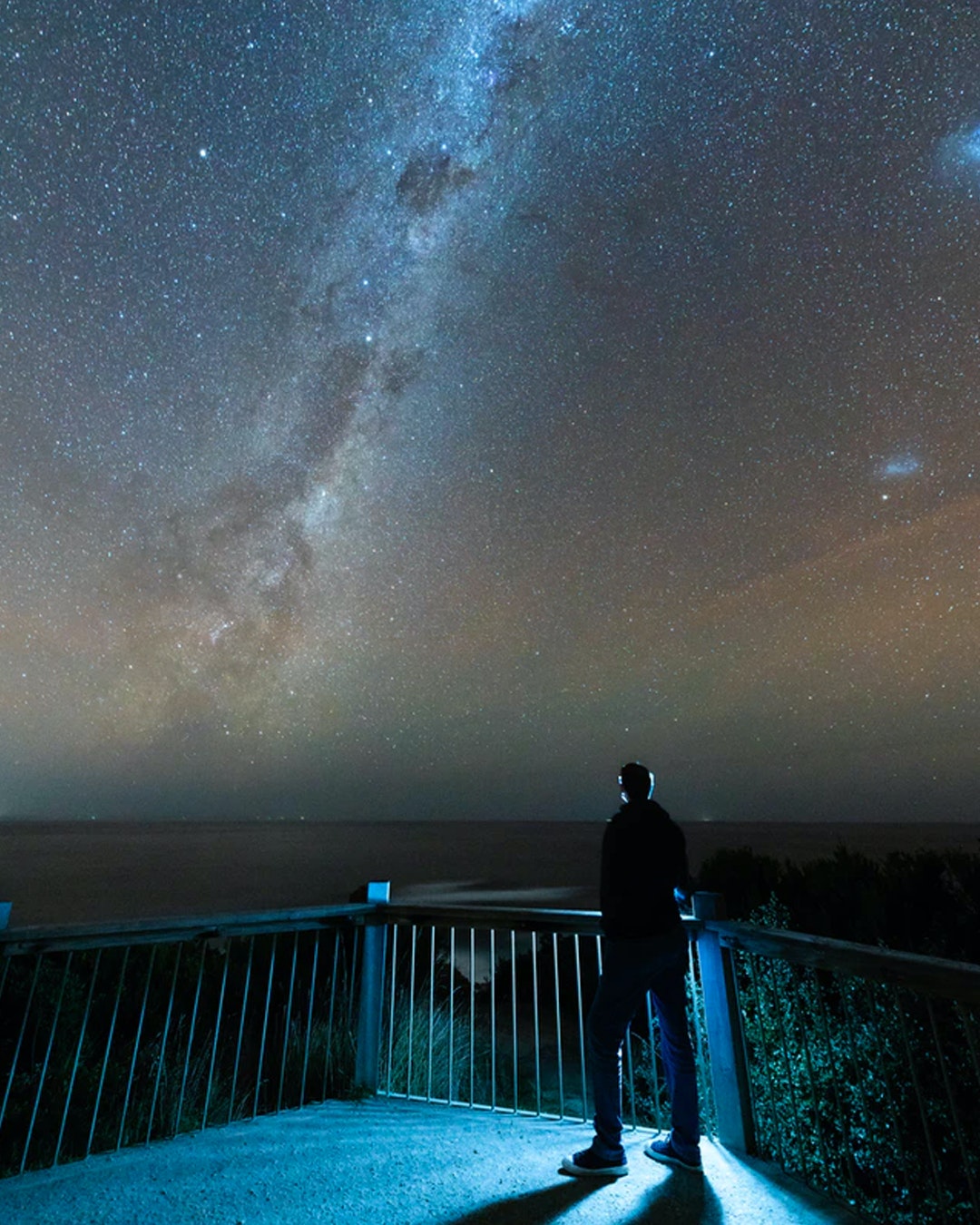 Victoria’s two largest telescopes reside at the ASV (Astronomical Society of Victoria). This place is tricky to get to (she’s almost set in the middle of nowhere and requires detailed directions to reach) but the stars here shine brighter than pretty much any other spot in Australia. You can access this one twice a year — in March and December (there’s also onside accommodation if you’re keen to stick around longer than a couple of hours).

Yaliya means “sky” in the local Gangalidda language and this tour focuses on Indigenous storytelling under the stars (plus stargazing with exclusive access  to Australia’s largest salt pans). You’ll get to uncover the sheer beauty of the night sky through state-of-the-art telescopes your  local Gangalidda guide will share Dreamtime stories and their cultural interpretation of the universe in accordance with the phases of the moon.

Double Island Point is particularly special for stargazing at night thanks to its remote beach location just three hours north of Brisbane. You’ll fall asleep to the sound of the ocean and wake up to a pretty special view. 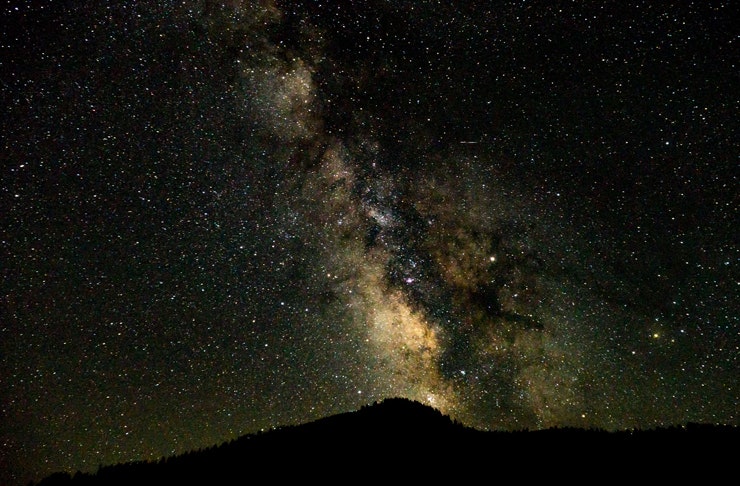 Moreton Island is famous for its pitch-black skies at night and we all know what that means — epic conditions for stargazing. Light pollution is not a thing here which is what makes it super special if ever you camp out this way or do a spot of after-dark trekking (bring your binoculars).

The Best Stargazing In South Australia

For Australia’s best skyscape, the River Murray International Dark Sky Reserve holds one of the clearest of them all. Tucked just 90 minutes’ drive from Adelaide on the banks of the Murray River, starry solitude awaits stargazers with low rainfall, clear skies and virtually no light pollution creating the perfect conditions to explore the cosmos. It’s also one of only official Dark Sky Reserve in Australia. 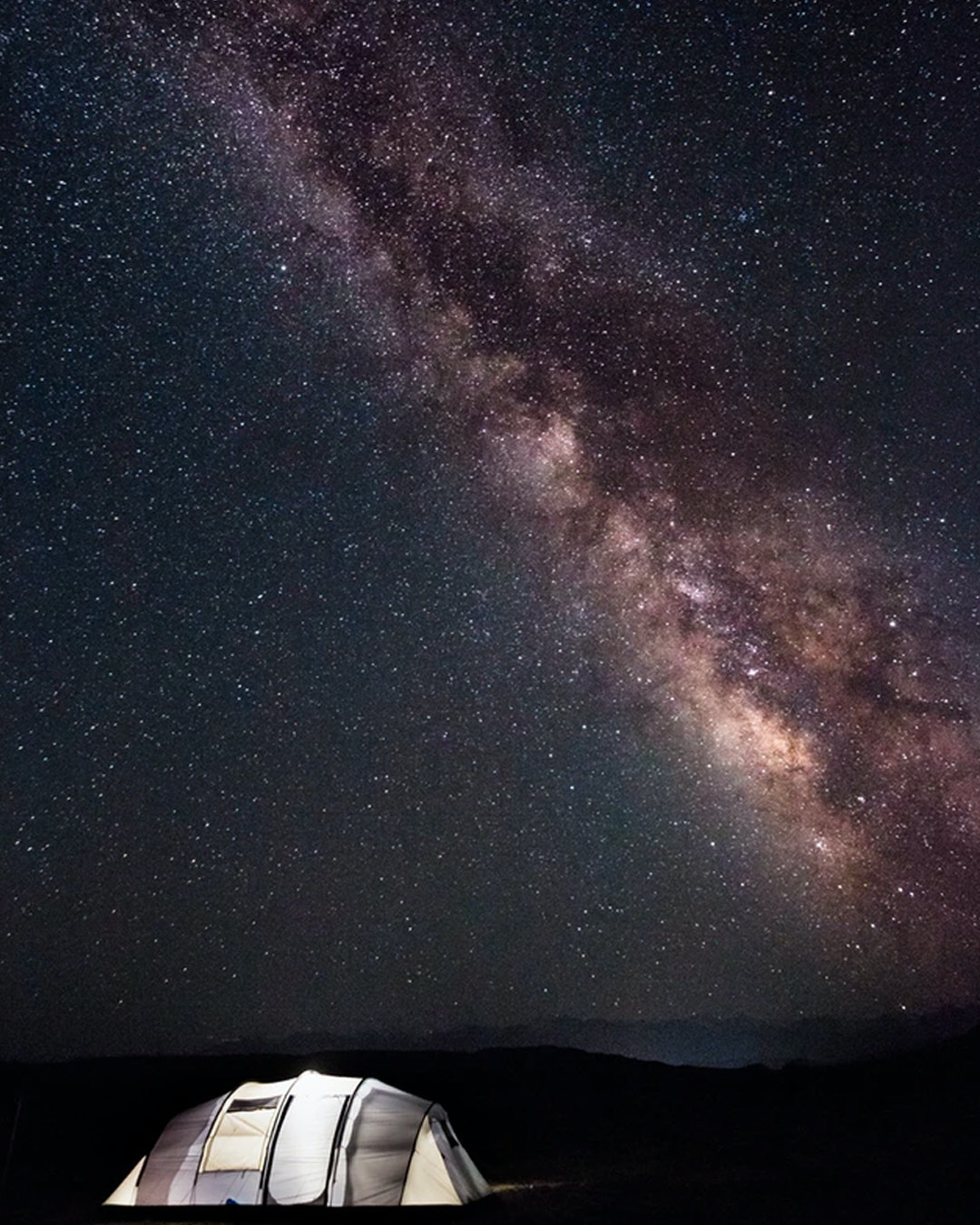 You can quite literally explore the universe from one of South Australia’s most popular coastal destinations — the Yorke Peninsula. Hit up Innes National Park — a secluded sanctuary for stargazers. Far from the city lights, the park’s remote location has resulted in some of the darkest skies in the state and is one of the best spots in South Australia to see the Milky Way. Set up camp at one of eight campgrounds dotted throughout the national park and spend the weekend soaking in the stars, sun and surf at this seaside paradise.

The Best Stargazing In Tasmania

It should come as no surprise that one of the absolute best places to treat your soul with a bit of stargazing is Tasmania’s crisp and clear Cradle Mountain. With some of the cleanest air in the world, this beautiful spot has little artificial light and is an epic region to hit when you want to gaze up at the Southern Cross constellation or want to try your luck at spotting the Southern Lights (Aurora Australis) which illuminates the sky with flickering shades of blue, green, purple and pink. 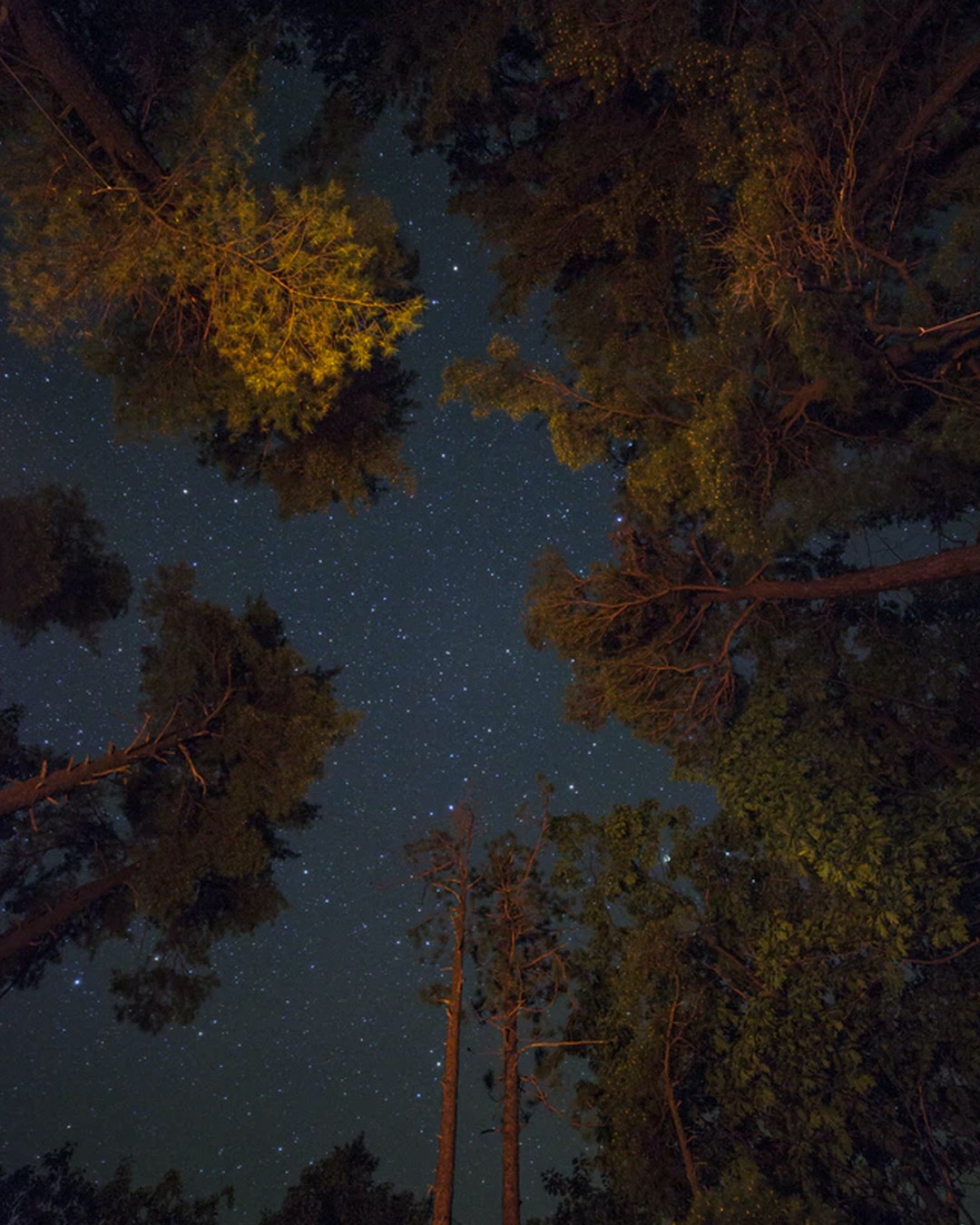 The Best Stargazing In The Northern Territory

Stargazing at Uluru is a bucket list travel experience. The sky above Uluru (Ayers Rock) is one of the most impressive skies in the world to stargaze because in the outback, there is literally no artificial light that could interfere with the dark night sky. You’ll also be front row across Australia to take in the Magellanic clouds and the famous Southern Cross constellation. 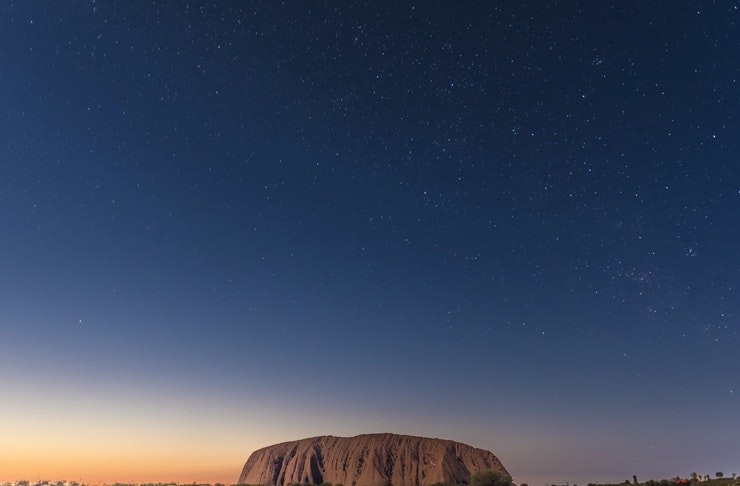 The Best Stargazing In Canberra

Canberra’s clear night skies provide a stunning backdrop to some of the brightest stars in the Southern Hemisphere.  At the Mulligans Flat Woodland Sanctuary, you can book a Twilight Tour to see animals in the wild – many of them endangered – and feel the nocturnal magic around you. On a clear night, look for constellations and planets, or simply gaze at the moon.

The Best Stargazing On Norfolk Island

For a stargazing saga like no other, Norfolk Island is a no-brainer. Void of light pollution, the star-splashed skies here are so clear that they’ve been dubbed ‘gold level’ status. Anywhere on the island will give you a great vantage point, whether you’re perched on top of Anson Bay Cliffs or sprawled out on Emily Bay’s iconic pontoon.

Plus, here are the best places to go camping in Australia (for free!).