Meet Budjerah, Matt Corby’s Protégé You Need To Know About

When it comes to homegrown talent, we are seriously blessed here in Australia—that busker down the street could be the next world-wide sensation (Tones And I we’re looking at you). Which is why we’re always pumped to chat to talented musicians at the beginning of their journey and they don’t get much more exciting than Budjerah.

That’s right, while we were baking countless loaves of banana bread, the duo were putting the final touches on Budjerah’s debut self-titled EP. Filled with soulful tunes that show off his youth spent singing in the church and poppy beats set to become summer anthems, Budjerah is absolutely one to watch.

Ahead of his national tour, we caught up with the crazy talented and yet incredibly humble singer to learn a little more about him.

I don’t remember a time without music to be honest. All of my family play music—it's been something that’s a part of every day of my life, I've always been surrounded by it. Of all the singers in my family though, my grandfather was the best. He had a really deep voice, played the ukulele and sang old hymns for church.

Is that where you honed your skills?

Who inspires your music?

Two of my big influences are my mum and dad. My mum is a singer and my dad is a drummer so they know a lot about music. I always show them my songs first and ask them what they think of them. They’ve always helped to guide me creatively. 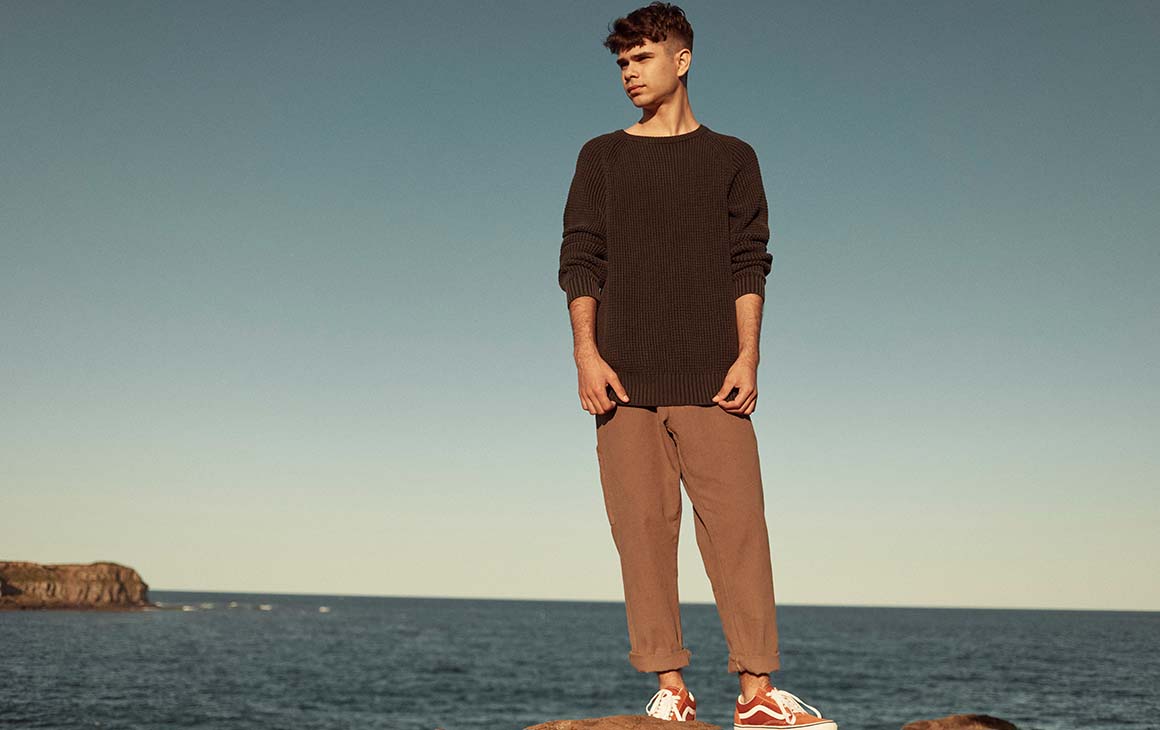 Matt Corby produced your EP, how did that collaboration come about?

When I was 16 I got to open for him at this gig in Brisbane. I was very shy so after I met everyone backstage I kind of just went and sat in the corner and didn't really talk to anyone (laughs). When it was my turn to perform I saw Matt peeking around the corner and watching my set. I thought it was really nice of him because he had to go and get ready for his set too but took the time to see me play. After the gig he said 'you're really cool, we should write some songs together' and so we did.

Casual! How did that feel as a 16-year-old, having Matt Corby say he wants to write music with you?

I thought it was pretty cool to be honest. I was still at school in year 10 so it was a pretty big deal for me.

How did you and Matt go about creating the EP together?

We didn't actually plan to do the whole EP together initially. We live near each other so it was really nice to just hang out and play music for a couple of months and from that the songs came organically. We had a couple of sessions together, spread out over a few months and created some songs. In one week we wrote Higher and then Missing You and we looked at each other and were like, these songs are great, this is the EP. Then in August we spent about five weeks doing the production on the EP.

It's very odd to be honest. I don't think I've found a process that works for me yet. Most of the time when I write songs it's a release of my emotions. I’m someone that tends to bottle up my feelings so I might have a good cry one night and then the next day I'll write a song. But at the same time it also can happen when I’m having a good time. When I wrote Higher I was having a great week so the song came out as a reflection of that. So writing wise it's whatever is happening to me at the moment, I put it in a song. Writing is my outlet.

Higher is such a feel-good anthem, and the music video with roller derby vibes is heaven—how did it all come together?

When we wrote Higher, the demo sounded like it should be played at a disco or a roller skating rink so I thought, we have to do that in the video. I needed disco balls and roller skaters and we got it.

Are you a roller derby fan yourself?

Honestly, I'm really terrible at it. I became friends with the skaters on the shoot and they got me some skates to try. I didn't skate in the video, but there is a video somewhere of me putting them on and then I turned into a baby giraffe trying to walk. I was like ‘quick, get them off, I can't break any bones’. But since then, I've been pracitsing skating up and down the hallway at home.

I feel like you need to take it on tour and skate across the stage...

Yes! I need to just roll on and start playing.

The threads in the video were awesome—you were really embracing the disco vibes.

I had never worn a suit before until that day. I didn't get to go to my high school formal, so this was a first for me. And to make it even better the suit was shiny and had glitter on it. I felt like I had the white suit version of Men In Black.

You’ve opened for the likes of Lime Cordiale and Thelma Plum but now you’ve got your own national tour coming up—what are you most excited about?

I’m so done sitting at home. I've been waiting to tour for what feels like forever—I love singing live. While it’s fun to sing in the studio and record songs I can’t wait to do it live and share what I’ve created.

Do you have any pre show rituals?

Other than warming up for an hour, I always make sure I double knot my shoe laces because I’m scared I'll trip up on stage. 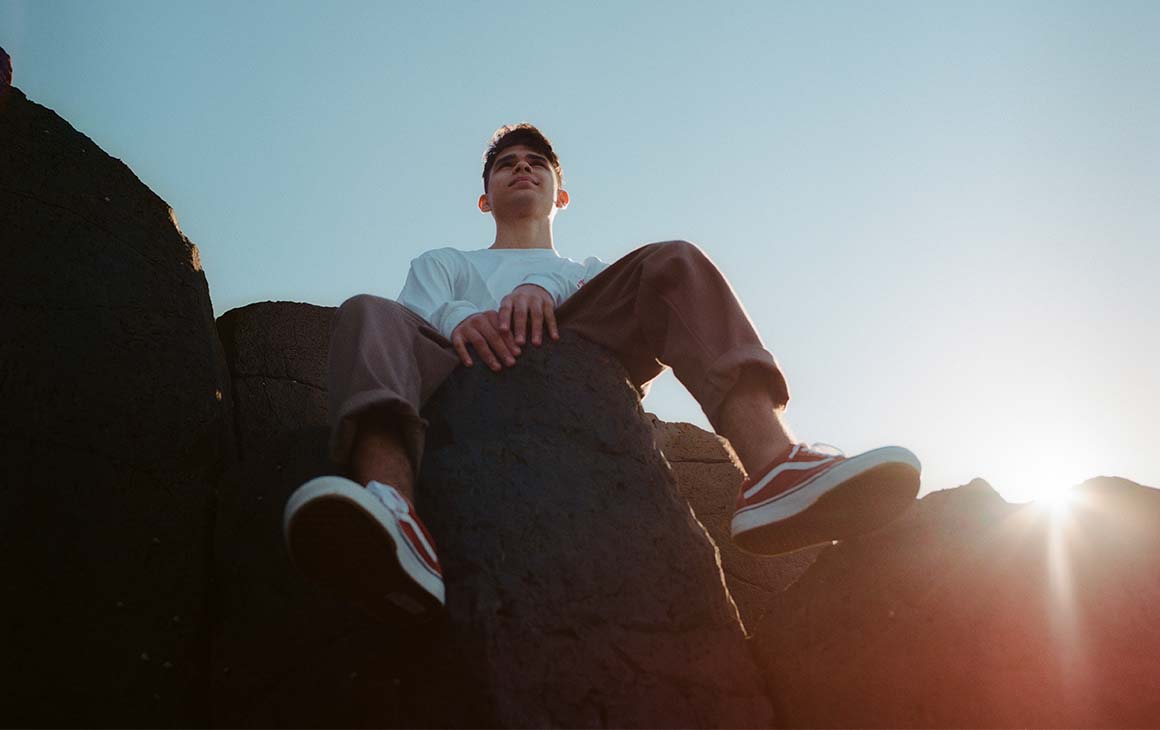 Aside from the tour, what’s next for you?

To get back in the studio. After the tour I'm playing a couple of music festivals and have some gigs around the place but I've got some stuff I'm working on right now.... maybe you'll get to hear it later this year.

Oh we love a teaser. Last question, who would be a dream collaboration for you?

That's a really tough one. Collaborating with Hiatus Kaiyote would be cool and I really would love to do a song with Mia Wray. She's such a great singer. I met her in Melbourne not that long ago and watching her perform was incredible.

Next up, check out our chat with the incredible Tash Sultana.