Tash Sultana On New Music, Owning Their Truth And Hitting The Stage Again

It's been five years since Tash Sultana's Notion EP crashed into the Australian music landscape and placed a gifted and incomparable artist at the forefront of public consciousness. Since then, the singer, songwriter, producer and engineer has been busy with world tours, sold-out shows, two albums, and like the rest of us, a global pandemic. Their latest album, Terra Firma, debuted at number one on the ARIA Albums Charts earlier this year. With its release, Sultana has openly stated they finally feel content with the music they're putting out into the world.

Now, the Melbourne-based multi-instrumentalist is bringing their tunes and all-around good vibes to the intimate MTV Unplugged concert series airing Sunday 23 May at 10am AEST. With a new album to show off and playing with a full band and a guest artist (a world first for them), the 25-year-old excitedly described the upcoming MTV Unplugged Melbourne performance to us as the "beginning of a Tash Sultana 2.0".

The day before taking stage for the stripped-back, televised show, we caught up with Sultana to discuss being at peace both professionally and personally, creativity during lockdown and the hope of playing for full capacity crowds again.

FIRSTLY, A HUGE CONGRATULATIONS ON YOUR NEWEST ALBUM TERRA FIRMA WHICH DEBUTED AT NUMBER ONE ON THE ARIA ALBUMS CHARTS.

I've never really won an award before, even as a kid. You know when you're in school and you win blue ribbons and red ribbons and green ribbons for whatever the f–k you do. I never won any of those. So, I feel like that childhood void has been filled now.

WHEN YOU'RE CREATING MUSIC, HOW DO YOU MOST ENVISAGE THE WAY PEOPLE CONSUME IT?

I don't think about consuming because I don't like to think of it in a capitalist way (laughs). For me, I just do what I do. I don't think about my listeners as consumers because I think this is not really top 40 pop stuff that you want to sell. It's art that comes from my heart and my space, and my spirit. I no longer release stuff that I'm not happy with anymore. I'd have a big song that propelled me up, and after that, my aim was trying to have a bigger one and a bigger one. And then I thought, well, this is this is sh–t because it's not realistic and I'm not f–king liking the music that I'm writing right now. So, I just cut that out. And now I literally only do whatever the f–k I want to do. And it's really great. I say whatever I want. I play whatever I want. And not in a negative way or anything–just being your authentic self. We waste so much time not doing that. 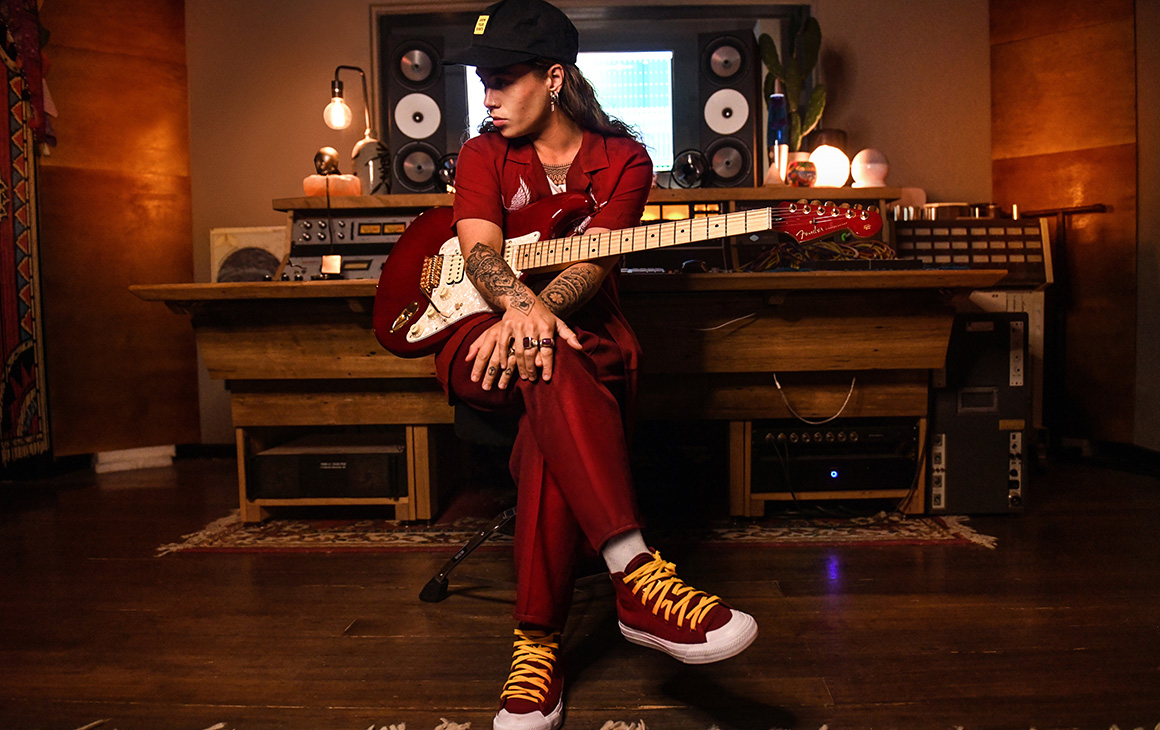 YOU'VE SAID A LITTLE BIT AROUND THIS NEW ALBUM THAT YOU WEREN'T HAPPY WITH SOME OF THE MUSIC YOU'D PUT OUT BEFORE IT. WHAT WAS THE DIFFERENT APPROACH THIS TIME?

One is age–I think you grow up. If I was to be discovered now, Terra Firma would be how people know me moving forward. All of the stuff in the past, a lot of that was just 4/4 busking jams, catchy, with a guitar solo, because I was trying to get people's attention. And it worked. And I have got people's attention now, which is really, really lovely. But I just want to say what I want to say now. And I think that this comes with acknowledgement and age. You just mature as a musician. The aim is to get better.

YOU'VE DESCRIBEd YOUR FIRST MUSIC FESTIVAL PERFORMANCE AS HORRIBLE, SAYING THAT AS AN ARTIST YOU CAN ONLY GET BETTER. YOU'RE TWO ALBUMS IN AND A FEW YEARS REMOVED FROM THOSE DAYS. HOW DO YOU SEE YOURSELF AS AN ARTIST NOW?

YOUR METEORIC RISE IN THE AUSTRALIAN MUSIC SCENE WAS OBVIOUSLY QUITE UNIQUE AND NOW YOU'VE JUST EXPERIENCED A YEAR WITHOUT PERFORMING LIVE. HOW HAS THAT MADE YOU REFLECT ON THE UNCERTAIN NATURE OF BEING AN ARTIST

I never have one plan. So, I never put all my eggs into one basket. In the last year, the live music aspect may not have been amazing but the other musical aspects around that actually really were. So, the collabs I got to do with people. The collab I'm about to do with people. The album that I wrote in that time. I did a bit of movie writing, like music for movies. And I did some stuff for PlayStation. It took one thing away but opened up a lot of other things.

WHAT KIND OF ARTISTS WERE YOU LISTENING TO AT THAT TIME?

I listened to heaps of heaps of 1970s disco and funk. I went to town on Aretha Franklin and Marvin Gaye and all of that era.

WAS THAT HELPING YOU WITH THE MUSIC YOU WERE WRITING, OR WERE THEY JUST YOUR GOOD TIME JAMS? 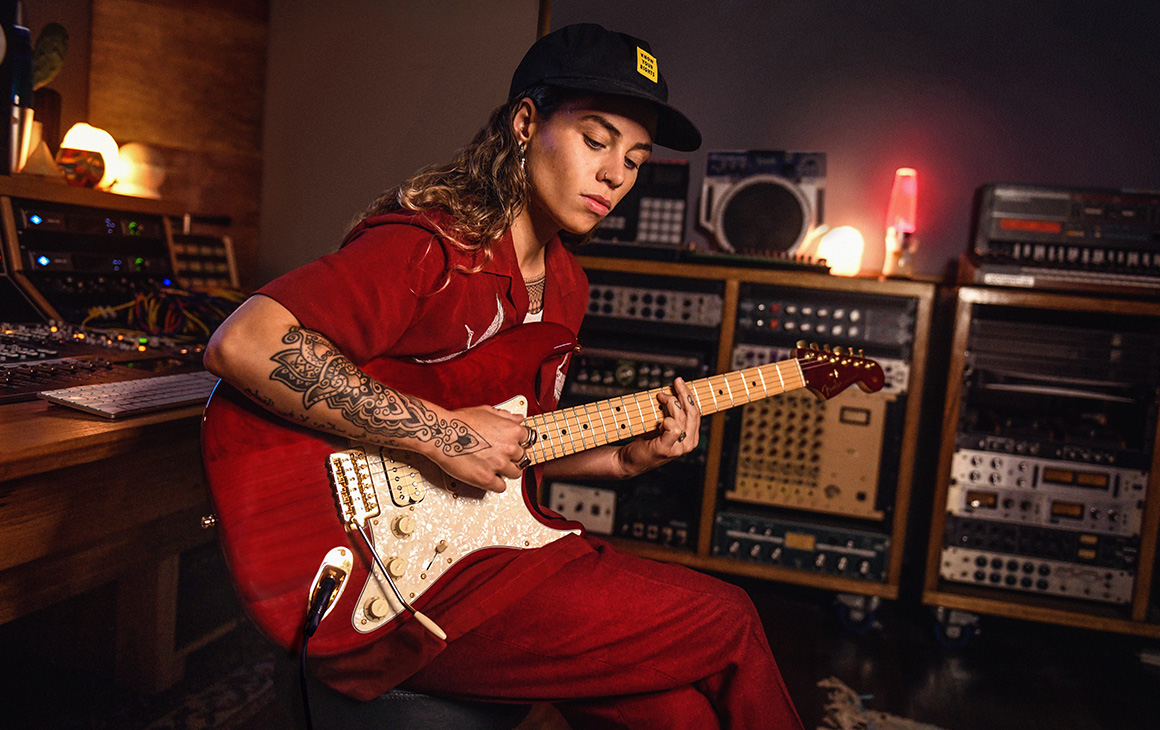 DID YOU FIND THAT YOUR MIND WENT INTO HYPERDRIVE WITH CREATIVITY DURING LOCKDOWN?

Yeah, and you know what, now I can't even write a f–king song (laughs).

SO, DO YOU LIKE HAVING THAT KIND OF SOLITUDE TO HELP YOU WORK?

I'm just a loner, man. I'm actually a full-on loner. I just jam like a motherf–ker to the point where people are like, are you okay? We haven't seen you, and we haven't heard from you and are you alright? I mean, I've been rehearsing to the verge of insanity for this MTV performance.

WITH YOUR MTV UNPLUGGED MELBOURNE PERFORMANCE, YOU'RE FOLLOWING IN THE FOOTSTEPS OF GANG OF YOUTHS, COURTNEY BARNETT, DMA'S, THE RUBENS AND AMY SHARK. THAT'S PRETTY DAMN GOOD AUSSIE MUSICAL COMPANY TO BE IN, RIGHT?

It sure is, and they're all great people too. I'm f–king keen. I'm here right now about to do a rehearsal for it, actually. Feeling pretty good–the vibe is definitely set.

WHAT APPEALED TO YOU ABOUT DOING A STRIPPED BACK SHOW WITH AN INTIMATE CROWD LIKE THIS?

In a sense, it's actually easier because of the amount of runup you get into it. When you play a show, you're rehearsing before it, but then you get on stage, and it's only what's happening in that moment, which is how people perceive you. The thing with doing a performance like this is we get to do quite a few different runs of it. So, you get super comfy by the time the cameras are actually rolling. Then you forget that they're rolling, and that's when you get the authentic artist, I reckon. When they're most comfortable.

ARE YOU BRINGING ANYONE IN, OR WILL YOU BE UP THERE SOLO?

I am solo for a section of it. And then I have a full band and a guest–for the very first time.

FINALLY, YOU'RE NOW BACK AND PLAYING IN FRONT OF AUSTRALIAN CROWDS. I KNOW THAT TRAVELLING THE WORLD STILL SEEMS FAR AWAY BUT WHERE ARE YOU MOST LOOKING FORWARD TO PLAYING MUSIC AGAIN?

Honestly, anywhere where there's a f–king sold out crowd of motherf–kers. Let's do it. Let's get back into it. We would love it and I speak on behalf of everybody in the music industry when I say that we would absolutely appreciate going back at full capacity.

After more chats with your favourite musicians? Check out our yarns with G FLIP and GRAACE.