Anyone who’s visited Thailand knows the hot, sour, sweet and spicy flavours of the local eats and how addictive they are. Once you get a craving for an eye-wateringly spicy papaya salad, an eggy pad thai or a whole fish soaked in tamarind and chilli, there’s not much else you can do but hunt it down and devour.

But we have little to complain about when it comes to Perth's Thai cuisine offering. In fact, anyone who knows what’s up is celebrating it (and filling up on it on the reg). From cheap and cheerful Thai joints to unapologetically old-school neighbourhood establishments, all the way to modern eateries reinventing traditional hawker food, here are the best Thai restaurants in Perth.

Hot, sweet, spicy and sour flavours in a laid-back but charactered joint. Kitsch Bar is traditional Asian street eats meets cocktails reminiscent of the bars of Bangkok, Singapore and Malaysia. Don’t miss the lamb massaman curry, green papaya salad or the crispy skin pork belly—though the menu changes frequently, so be sure to get adventurous, too. Also, their Pad Thai Tuesdays are something to behold: for $17 you get a big plate of delicious noodles and a beer.

Long Chim is hard to beat, not least due to its irresistibly cool location (the basement of the State Buildings) and excellent fit-out. Chef David Thompson himself refers to the place as ‘his little Bangkok in Perth’, and has constructed a menu that captures the flavours of Thai street food in all their spicy glory. From the chicken larb and the Chiang Mai sausage, to the papaya and watercress salads, to the prawn and fish dumpling laksa, the roast duck, and the beef massaman curry, you will leave here wanting to come back for lunch and dinner again the next day, and every day after that for the rest of time. Don’t leave without treating yourself to the fired banana roti! 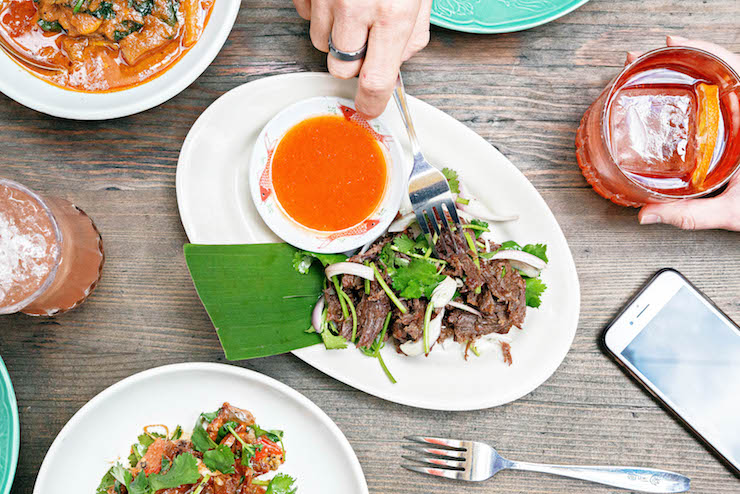 Long relied upon by Subi locals for a tantalising and authentic Thai meal, Lanna Thai is a pretty charming little nook tucked into the enclave between Hay and Axon Streets and Churchill Ave. It’s a warm little spot for classic stir-fries and curries, dished up to big round share tables surrounded by large golden statues and wall hangings. Be sure to get the prawn toast, and BYO wine and champagne!

Six Senses is serving up some of Perth’s best Thai food—they’ve got everything from soups and stir-fries to curries and salads, cooked with love and a fair few chillies, too. The food is traditional, but there’s a gourmet twist that makes a visit to Six Senses differ from that of other Thai joints. We don’t want to be too cliche, but their Pad Thai is killer!

Situated away from it all down the quiet western end of James Street, Dhusit Dheva offers up fine but authentic Thai food in a pretty elegant setting: think white linen, eccentric light shades and patterned wallpaper. There’s a bar mixing up contemporary cocktails that suit the food perfectly right in the middle of the seating area (easy access!) Their award-winning chef hails from Bangkok street markets, so you can trust that the food is pretty alright. 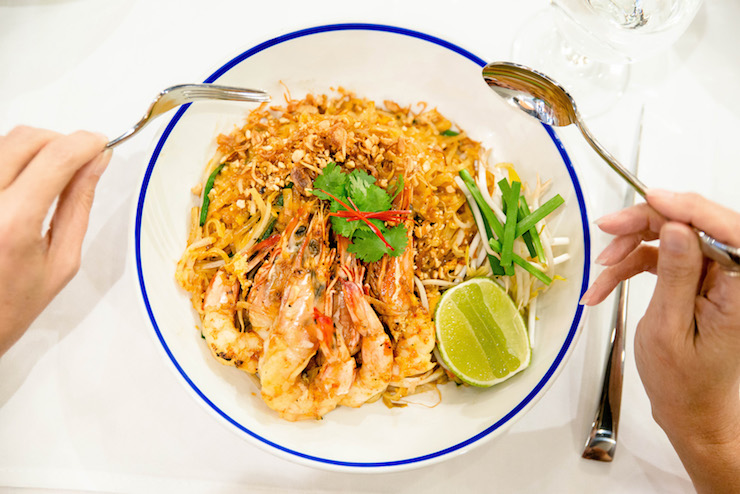 If you’re looking for a papaya salad that will make you cry, S & T Thai is the place to find it. It’s a bit of a hole in the wall, right by Viet Hoa in the heart of China Town. Their noodles are saucy and come with lots of extra garnish (crushed peanuts, fresh chilli, and bean sprouts) and their Tom Yum Soup is absolutely delicious. All enjoyed with your BYO wine and beer, of course!

One of Inglewood’s old-timers, Thai Orchard has been satisfying customers for almost two decades. The place is steeped in old-school grandeur (think gold walls and heavy wooded, high backed chairs), and despite a slightly dated facade, they’re offering up a menu that’s undeniably timeless. This place is all classic curries, stir-fries and hawker snacks, served up to large groups at long tables. It’s BYO too!

One of Perth’s newer Thai offerings takes on an almost fast-food persona in Little B, but in the best way possible. You’ll find this gem in Beaux Lane off Beaufort, dishing out Insta-yum Thai favourites with a modern and youthful twist. It’s all the flavours of a Bangkok street market, just served on trendier plates. There are also a few surprises on the menu like red curry burgers! 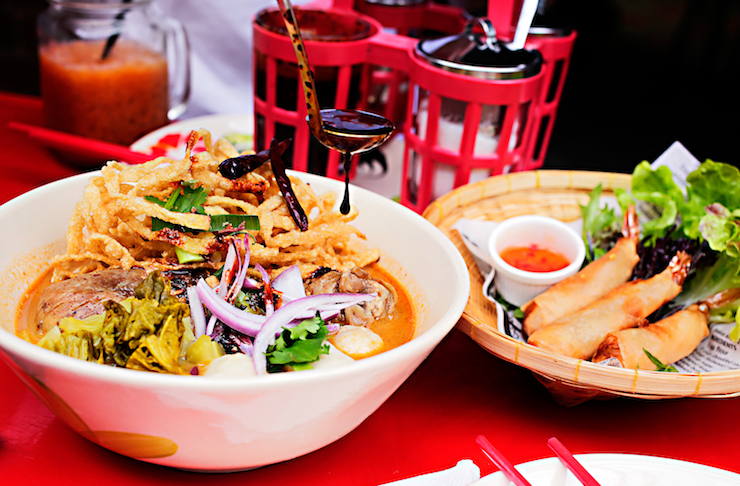 For seriously fresh Thai food packed with flavour, look no further than Longlae right in the heart of Mount Lawley. Handpicked ingredients are cooked according to ancient techniques and recipes, resulting in plates of food that are literally brimming with flavour. The larb and papaya salad are must-orders, along with the ‘prawn in the blanket’ for starters. Then, go for some curry or a whole fish, which you can get soaked in tamarind, ginger, sweet and sour or pepper and garlic sauce. They also have a great little list of desserts, and they're BYO!

Wrap ’n’ Rice is a small and friendly little takeaway joint providing some great quick lunch options—think fresh rice paper rolls, wraps and salads—and their curries and stir fries are some of the best in Perth. They do an amazing Pad Thai, Gado Gado, tofu larb, tom yum, and red curry, but the real menu hero is their roasted duck soup—it’s insane.

Saowanee’s Place has long been revered in the inner-North as the best Thai you can get in Perth, and it’s not hard to see why. Their food is so full of flavour that you will want to go back week after week—and many do. It’s a family owned and run restaurant, and the pride they take in producing great food is evident in every bite. Also, they don’t hold back on the spice: their som tum will make your head spin in the best possible way! Go the red curry, and for a house-favourite, the triple flavour fish!

Wedged between a Guzman & Gomez and a Triple X joint on James Street, Bangkok Brothers is a spot for eats as much as it is drinks. Boasting a lively yet laid-back vibe that makes the most of its Northbridge location (think live music and cocktail specials), the place is great to kick off a night out with some delicious and hearty food. They’ve got everything from Thai classics to more inventive culinary experiments of the Thai persuasion: like the scallop waterfall, oriental oyster or the pineapple fried rice. 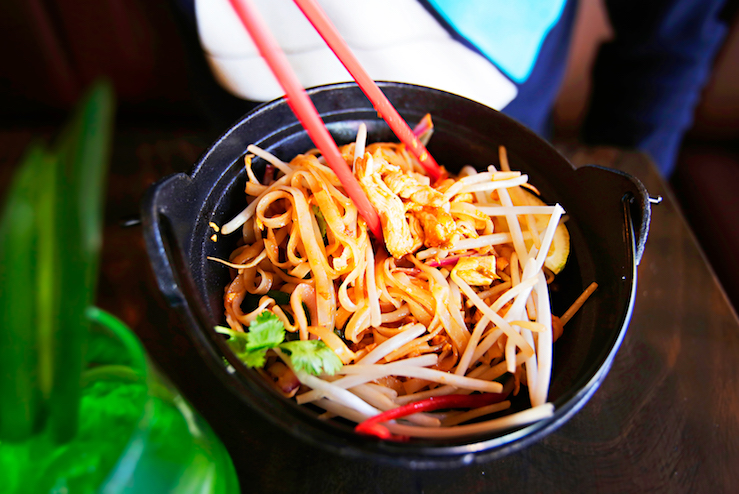 The King & I Thai Cuisine

The King & I Thai doesn’t compromise when it comes to authentic Thai flavours, and they’ve been dishing out solid eats to the people of Guildford and beyond for more than a decade. The place is generally full of regulars, especially on Friday nights, with menu favourites including the spring rice, Pad Thai and, for dessert, the sticky rice.

Unarguably dishing out one of Perth’s best Pad Thai with their home-made recipe, Thai Corner Kitchen has well and truly entrenched itself as a local fave in both locations. But it’s worth travelling for too, with a menu full of Thai classics done exceptionally well, including a dedicated menu for vegetarians!

It’s a pretty unsuspecting joint, but Mae Khong Thai is well-known by locals for dishing out some of the best Thai in Perth. It’s a pretty old school, family owned and run restaurant, offering classic Thai and Cambodian home-style fare including all your favourites. Their som tum papaya salad is delish, but they’re also pretty famous for their lemongrass duck and Penang curry! Plus, they’re BYO, as all good Thai joints are.

Feeling like something else? Take a look at Perth's best Mexican.