10 Caves Near Sydney You Need To Explore

Never fear, your dreams of doing some authentically outdoorsy things in Sydney (things that don’t directly involve wine) are about to come true.

We're talking caves—and not the rave kind. New South Wales is a state rich with caves to explore and many, luckily enough, are close enough to Sydney so you can easily knock them out over your weekend.

Got your map? Your hat? Your headlight? A keen sense of adventure? Then here are the 10 best caves near Sydney.

Let’s get the obvious out of the way first, shall we? Everyone knows the Jenolan Caves. You may have gone there on a family trip, school trip, or cheeky getaway at some point, in which case you’ll know exactly why they’re so popular. However, you may not know that this area is a sacred space for First Nations communities. For thousands of years, First Nations people from various clans would come to the Jenolan Caves to bathe in the pools of Nadyung and it was the people from the Gundungurra and Darug tribes that believed this water hosted strong healing powers.

It’s like another underground world at the Jenolan Caves, with glowing waters and seemingly never-ending caverns of wonder. If you haven’t gone, go. If you have, go again. Jenolan Caves has just reopened again for package tours.

Stalactites, stalagmites, helictites, cave coral, breathtaking caverns and even underwater lakes—Wombeyan Caves has it all. The Wombeyan Caves reside on Gundungurra Land and it is thought that the word “wombeyan” translates from the local language into "grassy valley between mountains”.

The reserve takes in a number of different caves and cave systems, including but not limited to Wollondilly Cave, Junction Cave, Fig Tree Cave, and, Dennings Labyrinth (which is every bit as adventurous as it sounds). Some caves are still only accessible as part of a tour, and some tours are currently on hold due to COVID-19 restrictions. Check here for more info. 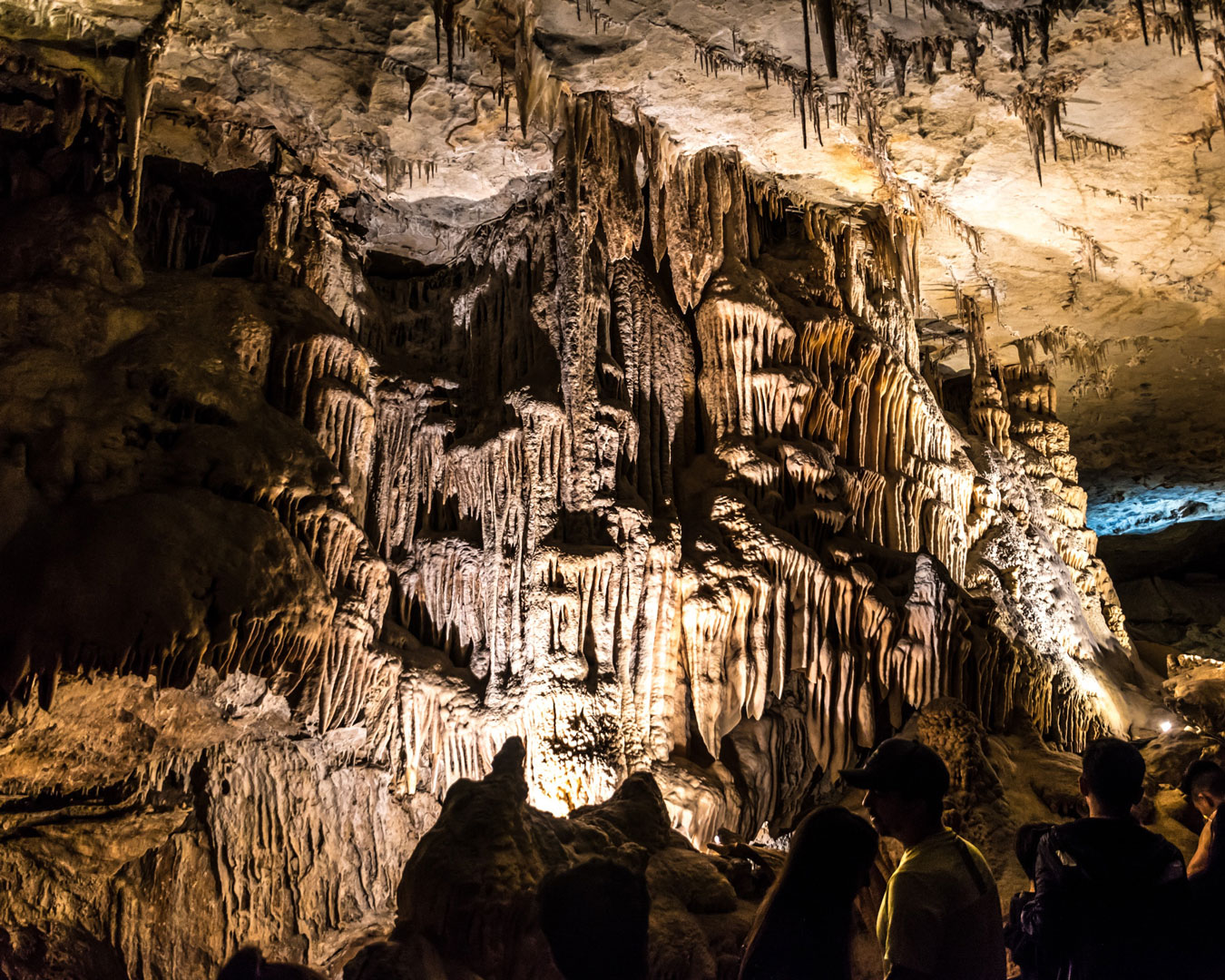 This ancient site near Broken Hill is a very special place to visit. This cave is lined with First Nations rock art and holds enormous cultural significance to Indigenous communities. It’s where Malyankapa and Pandjikali people performed initiations, rainmaking, and other important ceremonies. This rocky overhang will completely blow your mind come sunset.

As one of the largest sites of Indigenous rock art in NSW, Mutawintji is still a place where cultural gatherings happen today. Because of this, you’ll need to make sure you visit Mutawintji with respect and only on a guided tour. 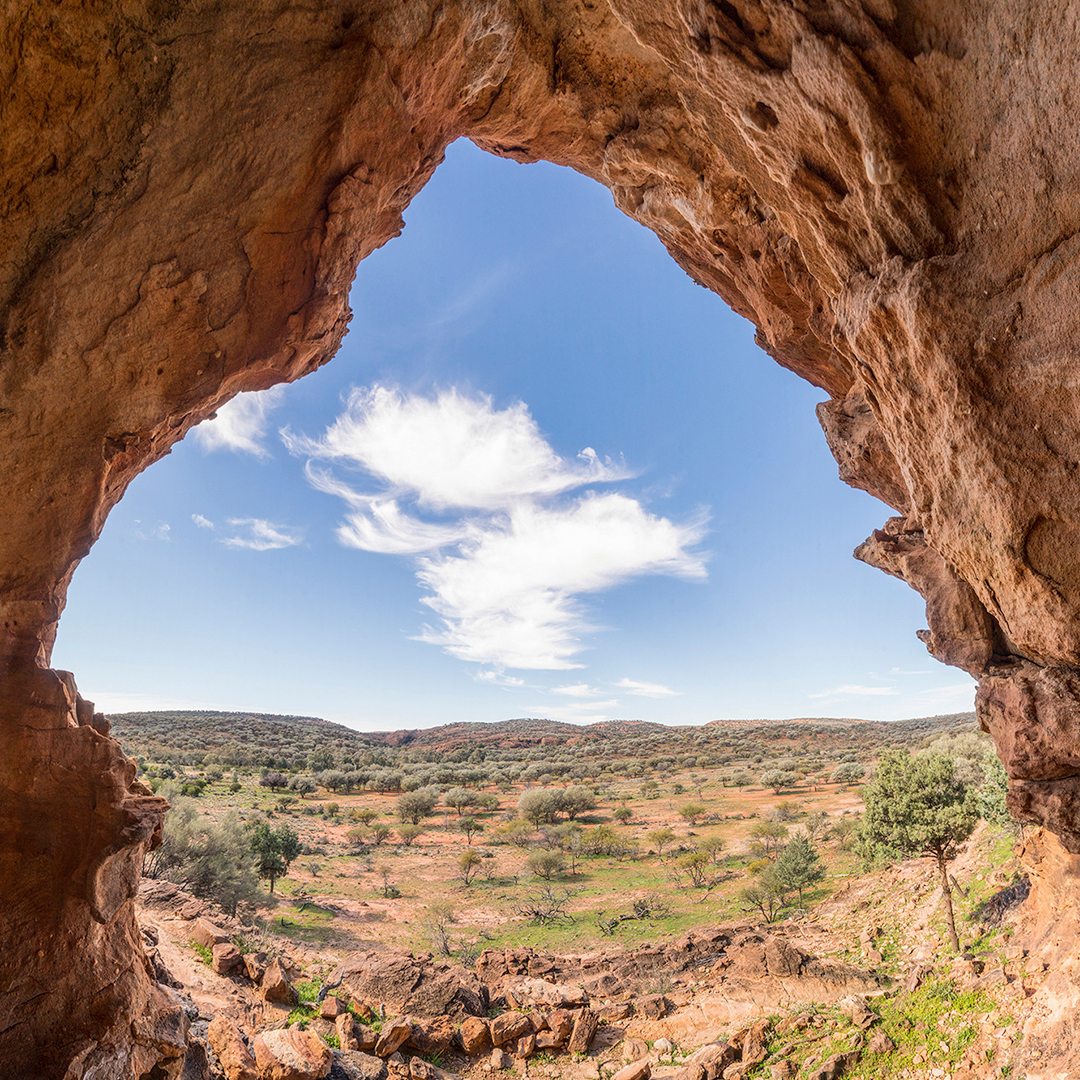 Kanning Cave is living proof that good things come to those who are patient and explore. Located in Kincumber, an Indigenous word meaning "towards the rising sun". The best part of this Kincumber Cave requires you to crawl through another part of the cave. It’s not an easy crawl, either, so only do it if you’re brave and curious. If you’re not (no shame in that), simply bask in the glory of the walk and enjoy cave numero uno.

Filled with stalagmites and stalactites, this wondrous place is only about two hours from inner Sydney. We won’t spoil things too much, but let’s just say if you like waterfalls, you’re going to love it here. Was that subtle enough? Part of the beautiful Royal National Park, which is a place rich with First Nations rock engravings, shell middens, and grinding grooves, Palona Cave is nestled into an area home to the Gweagal People, a Dhawaral speaking clan.

Lake Macquarie’s stunning Caves Beach falls on Awabakal land. The beach and cave area here used to be known as The Plains and there's evidence that the Awabakal People used this rea to collect resin, used in spear-making.

Safety-wise, these special caves are only accessible at low tide. So, unless you want to get yourself in a tricky situation like Kate Hudson in that very average movie she did about treasure hunting, make sure you play it safe and check the tides. This place is amazing, but it’s pretty much neverending, so be sure to go in with a friend and have a clear plan of attack. Once you’ve got that covered, the world is your oyster. Or cave. 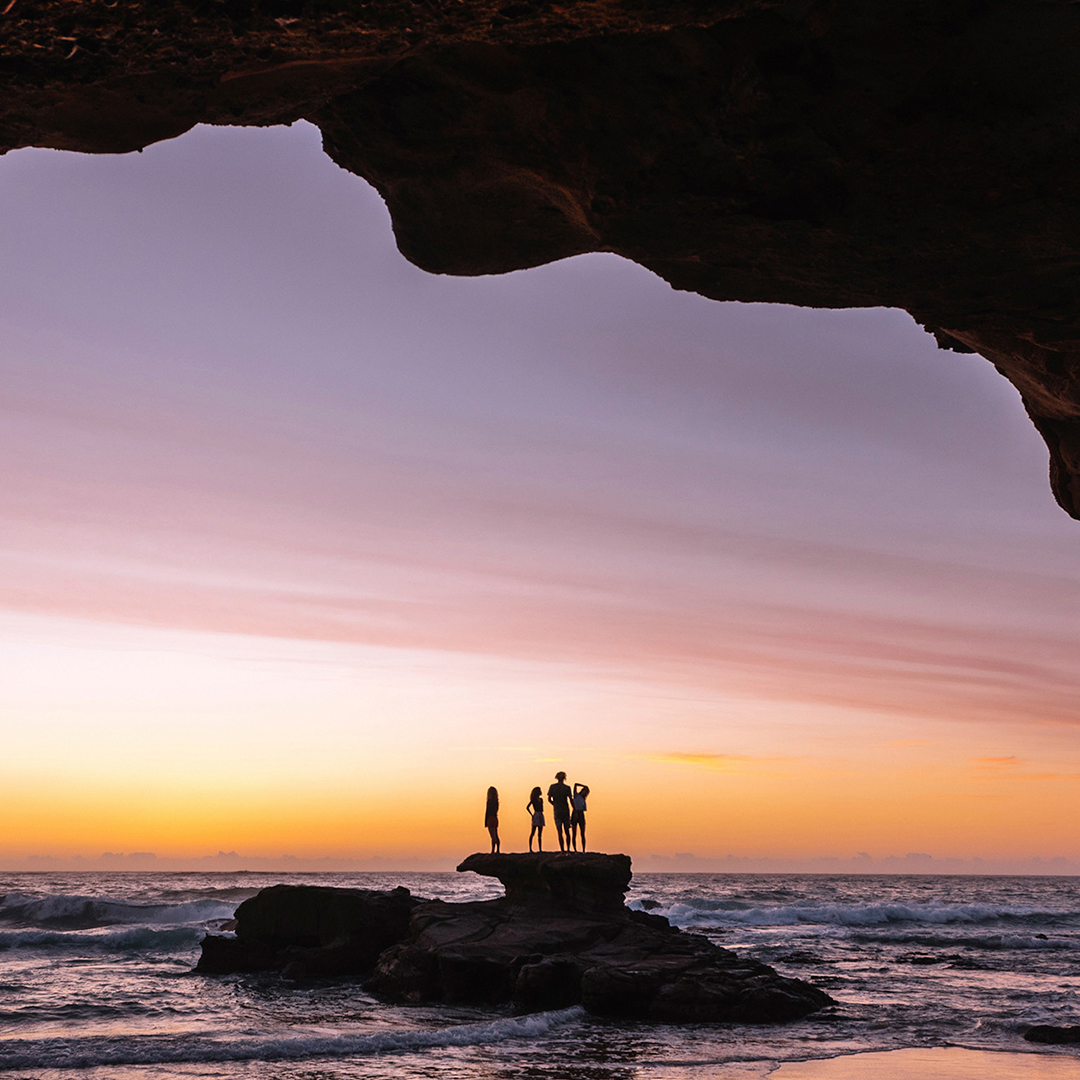 Two words: glow worms. Close to Lithgow, the Glow Worm Tunnel is an easy and favourite adventure among many. As for its history, this place has connections to the Wiradjuri, Dharug, Wanaruah, and Darkinjung people.

You can access this one via the aptly named Glow Worm Tunnel Track (which will take you around one to two hours return) and this one is completely dark inside so—bring a big torch. The tunnel spans about 400-metres and is home to thousands of glow worms that emit a beautiful bioluminescent blue light. 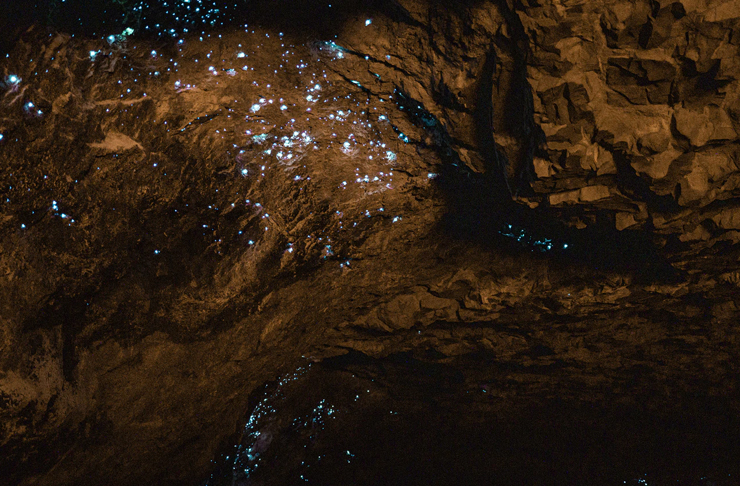 There are six epic limestone caves at Yarrangobilly Caves, a site that falls on land owned by the Wolgalu People. These stunning grottos are millions of years in the making. You can choose between some guided tours (to get all the know-how) or explore the likes of the South Glory Cave (the largest in the area) on your own. The caves were closed after last summer's fire damage in Kosciuszko National Park but have recently opened again. 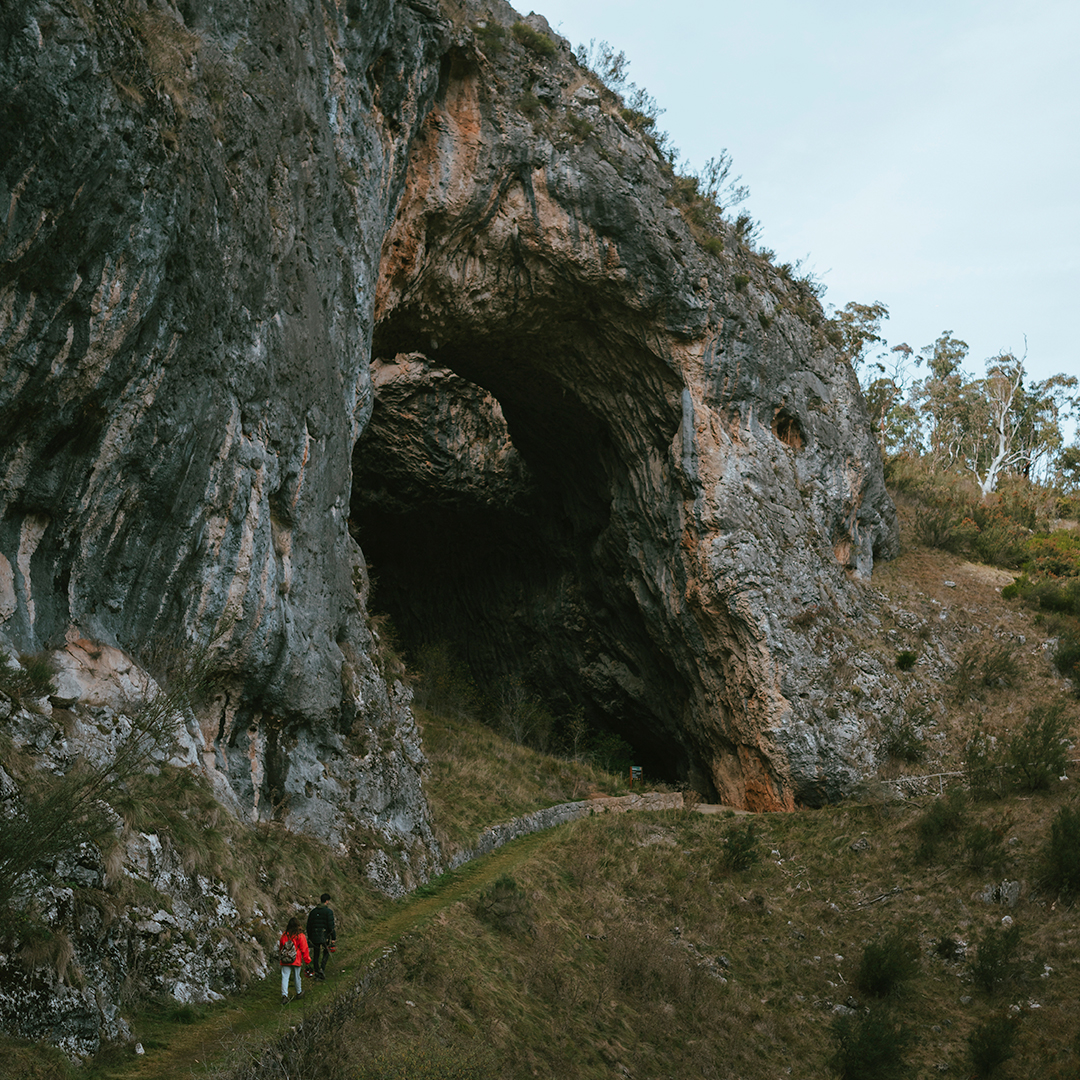 This one is great for those that don’t have the time to be driving to the Blue Mountains, it will take you just under an hour to get there from inner Sydney. Red Hands Cave lies on Durramurragal land. The Durramurragal People fished and hunted in the waters and hinterlands of the Ku-Ring-Gai area and you'll find lots of Indigenous rock art and engravings on the Red Hands Cave walk (it's important that you don't touch these).

The walk is about 45 minutes if you don’t stop to look at things a lot, but you will so add on at least half an hour. This magical cave is adorned with Aboriginal rock art, most notably ochre handprints, thought to have been painted between 500 and 1600 years ago. If you have the time, we highly recommend continuing on with the Aboriginal Heritage walk, an extra 4km, afterward.

Full disclosure, this is less of an Aladdin-style cave of wonder and more of an incredibly enormous cave-like overhang situation that will shelter you from rain and falling leaves and maybe even your enemies if they’re lurking up top. You can camp here, too, so dust off your sleeping bag and brush up on your fireside stories. Pindar Caves lives in an area shared by the Darkinjung and Kuringai People who used the surrounding foreshore and estuary for a range of practices.

Keen to keep exploring? Here are the most beautiful lighthouses in NSW.