The Best Fried Chicken In Auckland To Crunch Your Way Through

Once only the territory of KFC, now there's a myriad of options for this mouthwatering treat, taking inspo from Japan, Mexico, Korea, Jamaica and beyond. So grab the napkins and dig into some of this tasty goodness at one of the following restaurants—finger-licking 100% guaranteed.

Gochu's fried chicken game is strong, and we have chef Jason Kim to thank. Taking cues from his childhood in Seoul, he's created a version ('Jason's fried chicken') that combines succulent, bite-sized pieces of meat with an ultra-crunchy batter slathered in a vibrant, spicy sauce that will have you returning time and time again. Step things up a notch by ordering an even hotter version ('Jason's fried chicken, but spicier') though be warned, this one packs a serious punch, so you'll definitely want to have a bevvie or two on hand to cool your jets.

Karaage chicken (aka Japanese fried chicken) is the business and Azabu make some of Auckland's best. Cluck—er, tuck into this refreshing take on the fast-food classic which comes with pickled daikon, oregano or kale crisp and aji Amarillo mayo—oh, and did we mention it's also free-range? And now with two branches, getting your hands on this deliciousness has never been easier. 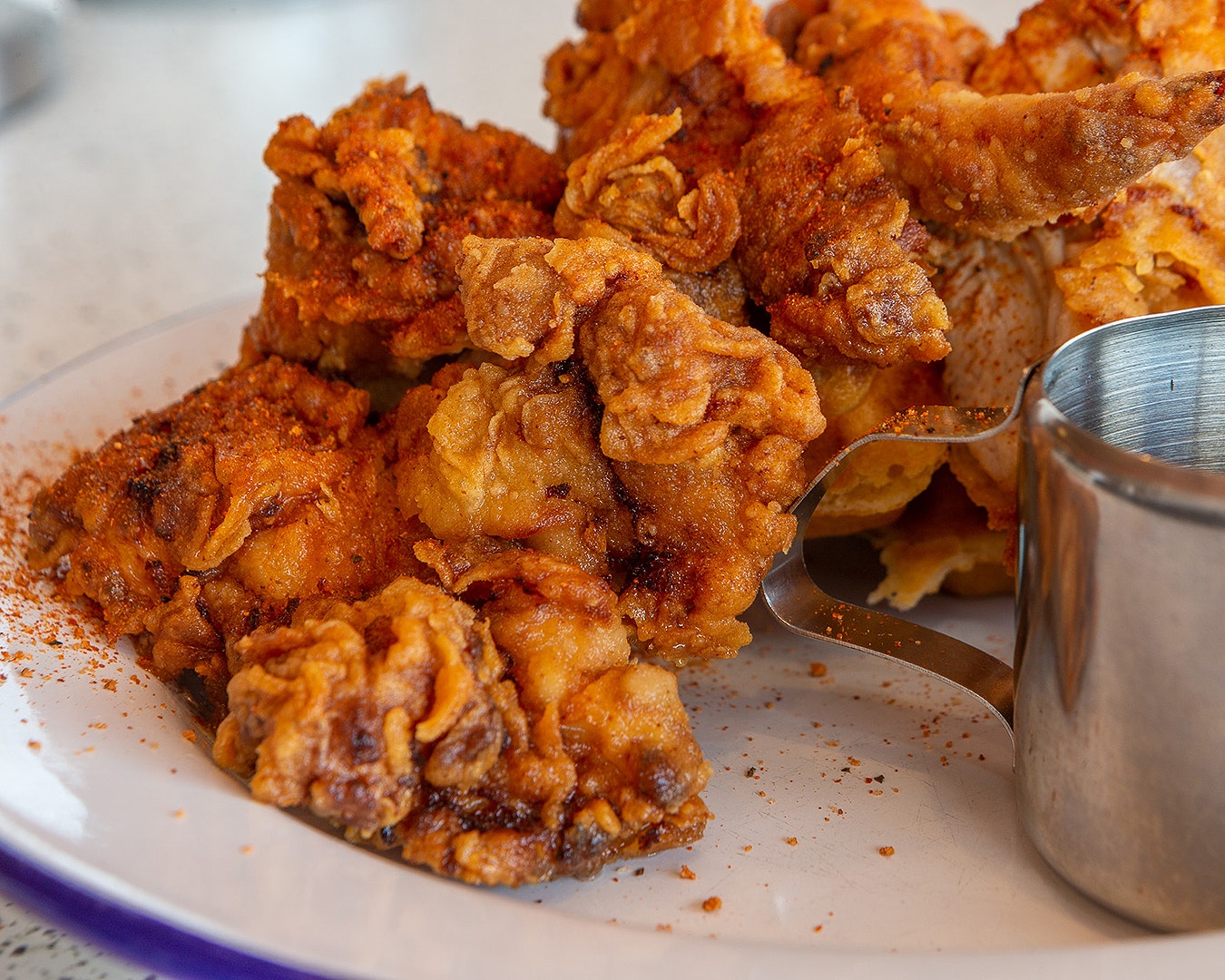 We're not kidding when we say that the fried chicken at Peach's will change your life. Made in the authentic Nashville style from a recipe handed down by one of the owner's grandmothers, this epic interpretation is available in a range of spice levels, including the infamous Holy Cluck (which, we must warn you, is not for the faint-hearted). Let the flavours speak for themselves with a couple of pieces served simply alongside some white bread and pickles, or indulge in what has to be our fave dish here, the best-selling Baller Sandwich. Think crunchy, boneless fried chicken thigh crammed inside a soft brioche bun with coleslaw, cheese, pickles and lashings of aioli-style sauce. Holy cluck, indeed.

With a name like Winner Winner, it's no surprise that these guys are a contender for Auckland's best fried chicken. Until recently, we had to travel to Pukekohe to get our share of the goodness but now they have a store in Takapuna and we're beyond eggcited. Bought to us by the same team behind BurgerFuel, Winner Winner's famously delicious free-range fried chicken is brined for 12 hours, cooked in a lip-smacking buttermilk batter then served in one of three tasty options (The Basic, Hot Dipped or Proper Hot). Best order some loaded fries to go with (and a slice of their legendary Pinkie Pie for afters). 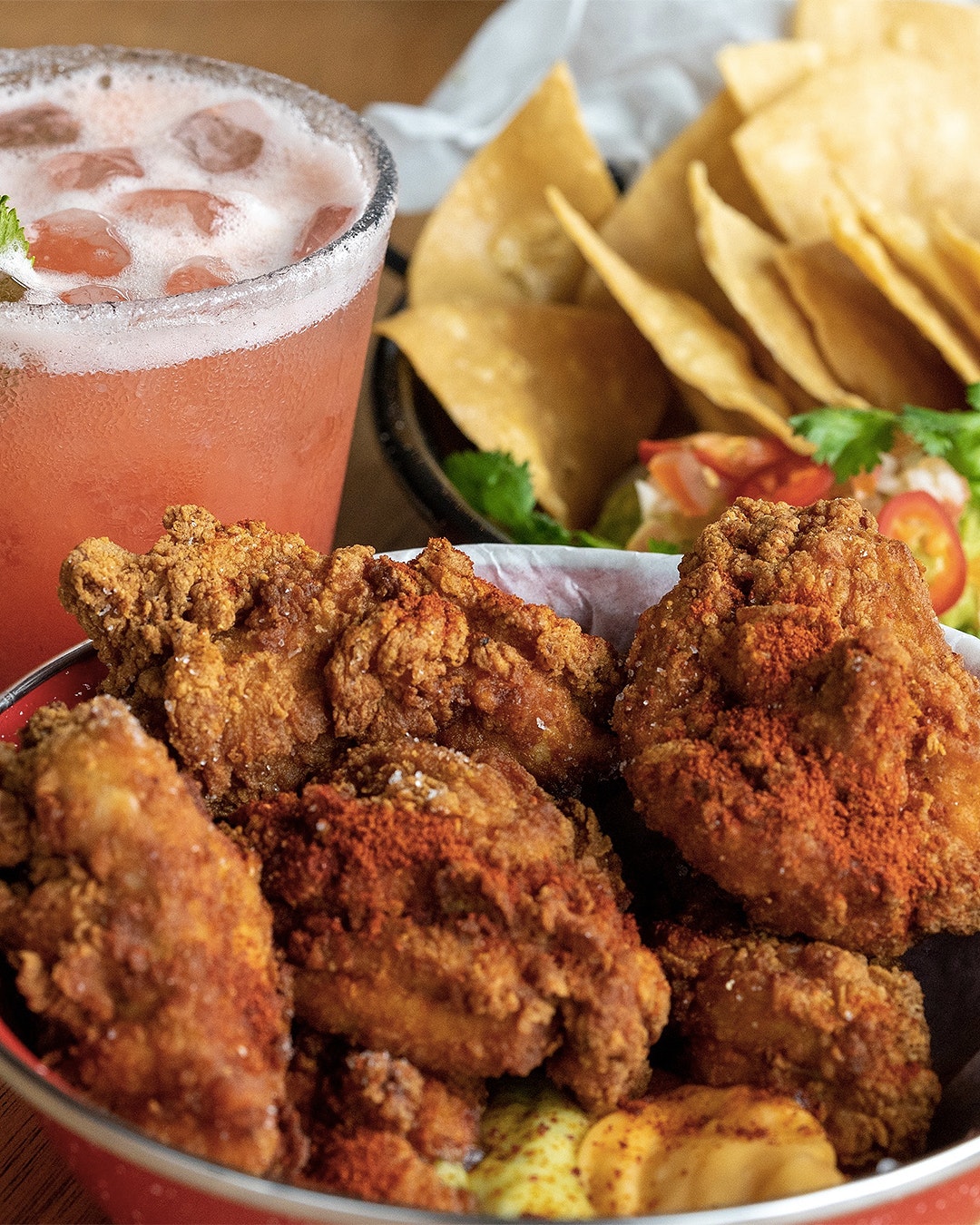 The spot that's perhaps responsible for starting Auckland's fried chicken craze, Mexico's signature offering still tastes just as good after all these years. Little nuggets of spicy, golden goodness served with both jalapeño and chipotle mayo, this is the sole reason some people dine here. We hope this one never leaves the menu.

Also serving up some pretty epic fried chook is Electric Chicken in Kingsland, who revere this fried food so much, they offer an entire menu dedicated to it. From delish quarter, half or whole birds through to nuggets, there really is a fried chicken dish for every taste. For peak fried chicken pleasure, you'd best order a side of their Loaded Crack Fries with cheese gravy and jalapeños—the result is nothing short of, well, electric. 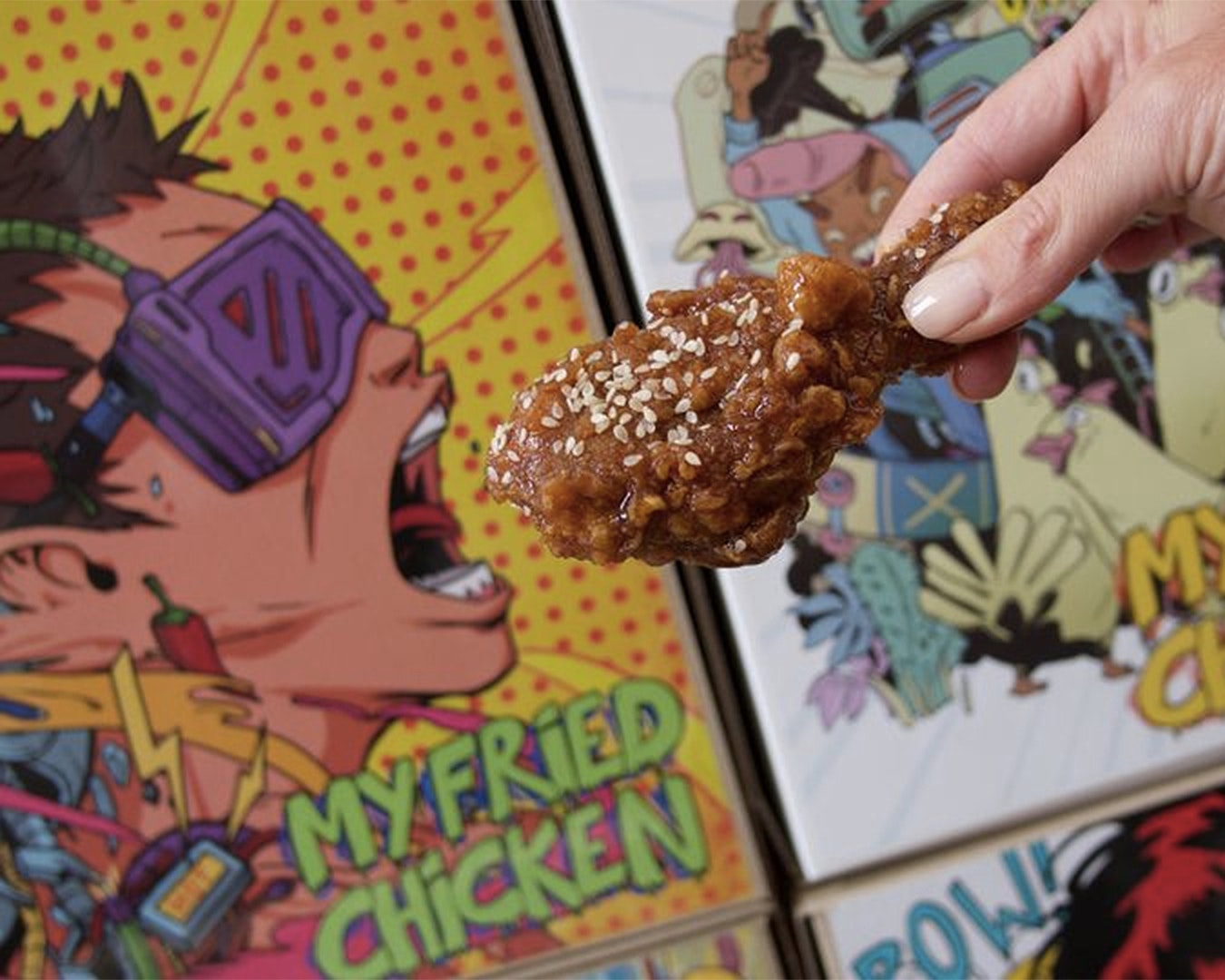 Fried chicken gets the Korean treatment at this funky spot located inside Ponsonby Central. Pull up a pew and watch as the chefs prepare their version of this much-loved treat, which comes in super mild, super spicy and everything in between. If you do happen to get a little hot under the collar, a can of Garage beer (of which there are a number of options available) should soon sort you out.

Anything the Lowbrow. team touches turns to gold, including their fried chicken. Here it comes in the form of American-style wings, served alongside a creamy ranch sauce and some white bread—perfect for wiping up any precious juices that might try to escape. You can also get your fried chicken fix by way of a sando (burger), or even in a Caesar salad (yes, salad!). We'll take one of each, thanks. 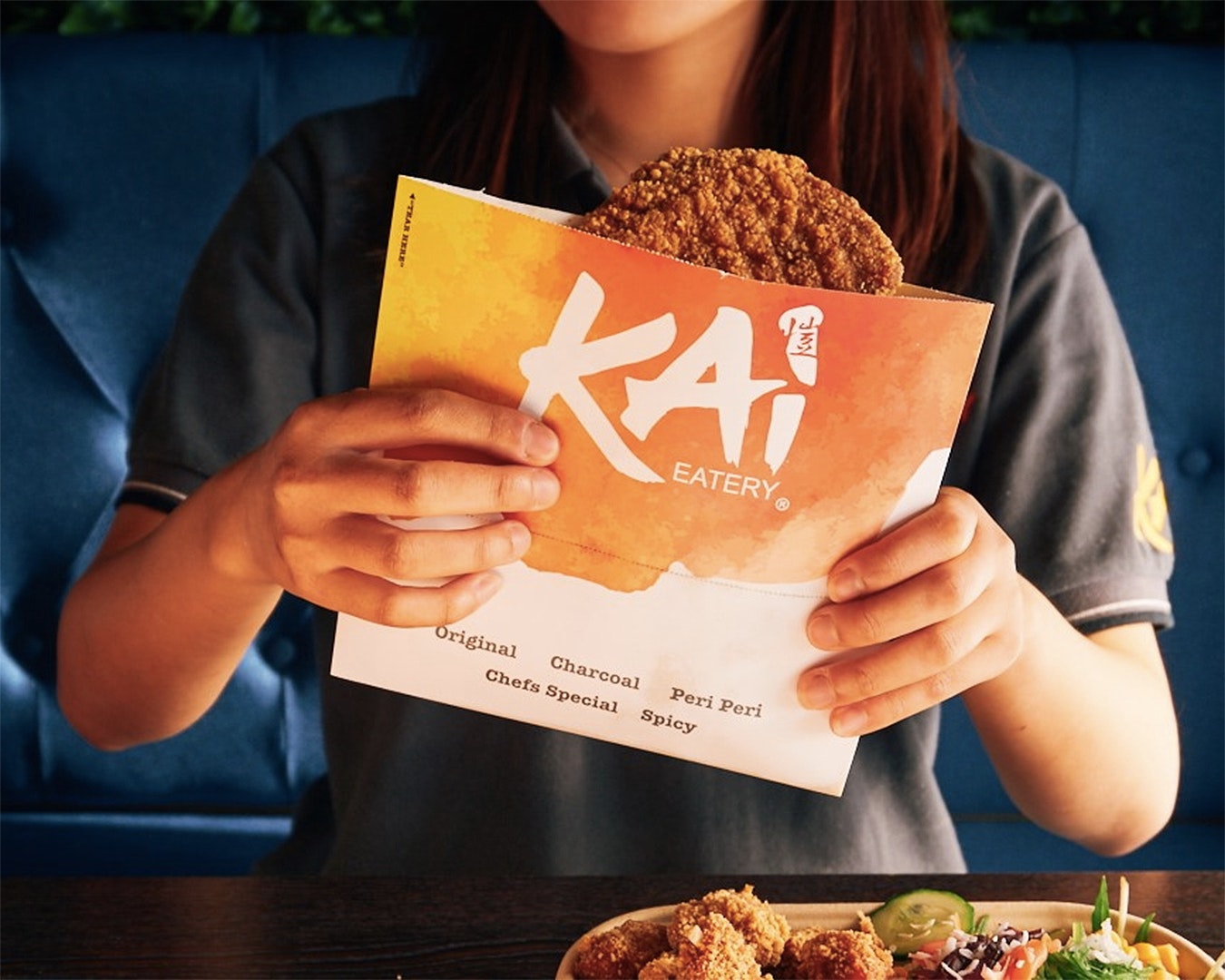 We know that bigger isn't always better, but when it comes to fried chicken, it certainly is. Lucky for us, there's a super-sized version of the dish being served up at Kai Eatery. Their signature, Taiwanese-style XL Fried Chicken is world-famous in Auckland, and for good reason. Think boneless, butterflied chicken breast bigger than your face with a juicy marinated inner and crispy, generously-coated outer; available in drool-worthy flavours like salt and pepper and peri peri. Share amongst friends or keep to yourself, we won't judge.

The Candy Shop favour the Korean style of fried chicken, which they've cheekily (and rather cleverly) dubbed 'KFC'. Indeed, theirs is a far cry from that offered by the fast food giant, but we certainly aren't complaining. Choose from the equally delish original with garlic soy dipping sauce, or spicy with tteokbboki (fried rice cakes). Yummm. 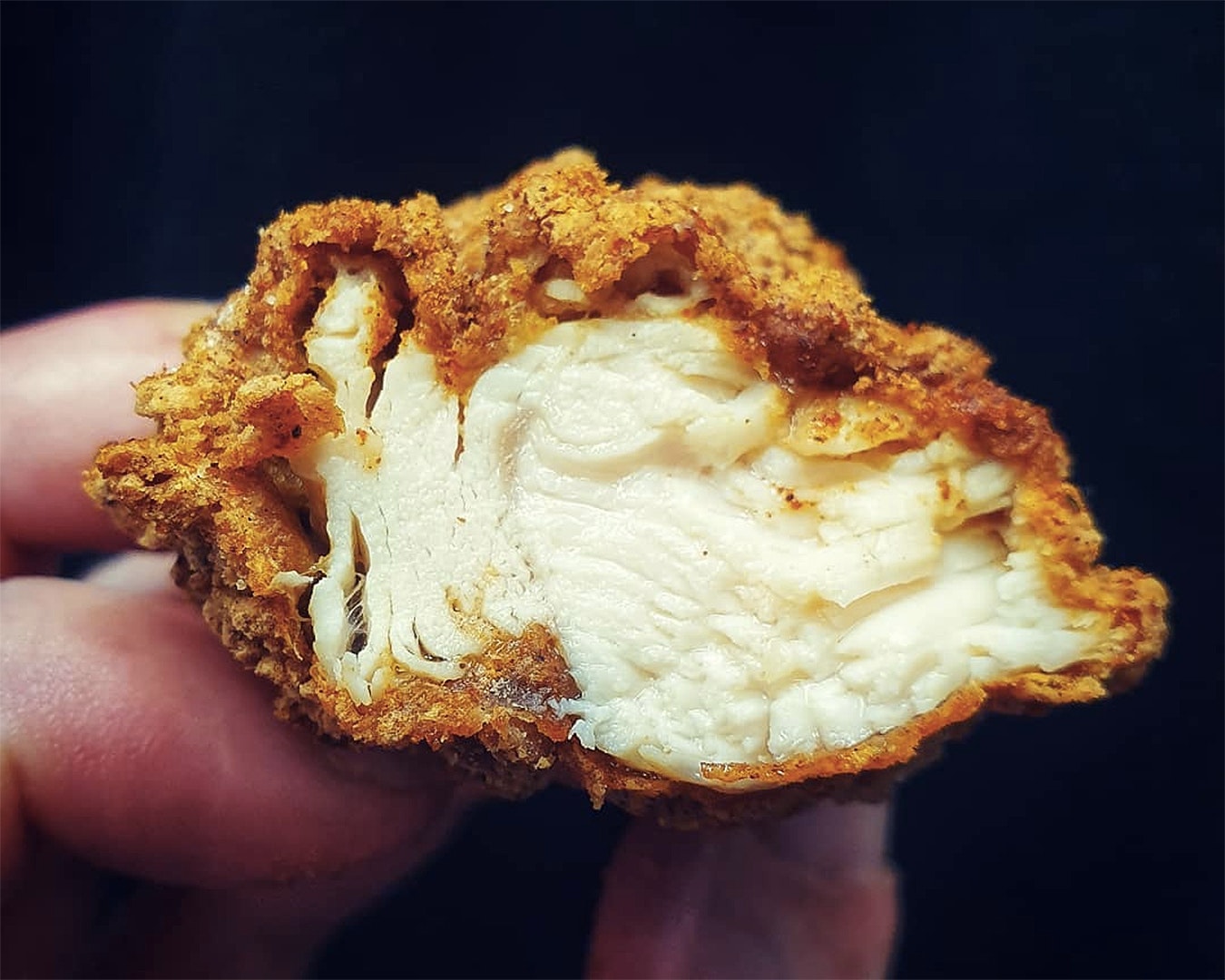 For fried chicken that's hot (both figuratively and literally), The Coop is the spot. These guys specialise in the Jamaican version, using the famously-flavoursome jerk seasoning. The hardest part will be choosing which of their mouthwatering options to order, which include unexpected flavour combos like harissa with coconut and peanut dukkah, and kimchi with gochujang mayo and cucumber. That said, our fave offering here has to be the Caribbean, which embodies classic Jamaican flavours like pineapple and coriander—lip-lickingly good.

Honourable mention—Lord of the Fries

Is it weird to feature a vegan restaurant in an article about fried chicken? Maybe, but we love the fact that there's a convincing alternative out there for the growing number of plant-based eaters. Yip, Lord of the Fries' version—made from soy protein—is about as close in looks and more importantly, taste, to legit fried chicken as you'll get (it even separates just like the real deal). Fried chicken, without the chicken? Genius.