I scream, you scream... well, you know how it goes. Whether it's fresh and fruity or rich and chocolatey, in a cone, on a stick or in a cup, we just can't get enough of the cold stuff. As it's our 10th birthday we asked for your favourite ice cream and gelato shops in Auckland on Instagram and you didn't disappoint.

So in no particular order, read on for your picks of the best ice cream and gelato shops in Auckland.

The pretty little ice cream parlour with the cute name, this one's a must-visit and it by far had the most votes on our IG poll. Originally from Hamilton, Duck Island now has two branches in Auckland and has amassed quite the following since they opened thanks to its fun, often unusual flavours, many of which are also vegan. Natalie loves its many vegan options and unique flavours. Indulge your inner child with a cone of sprinkle-filled 'fairy bread' (Petra's hands down fave)—dig your way through a cup of marshmallow and chocolate-studded 'ambrosia'—or, if you're feeling super adventurous, check out the black sticky rice or raspberry, coconut and coriander offerings. Alternatively, grab yourself a tub of one of Duck Island's core flavours (think peppermint slice and salted caramel with cacao crumb), available from most supermarkets. There is a god. One last thing... the white chocolate roasted miso slaps according to one fan. 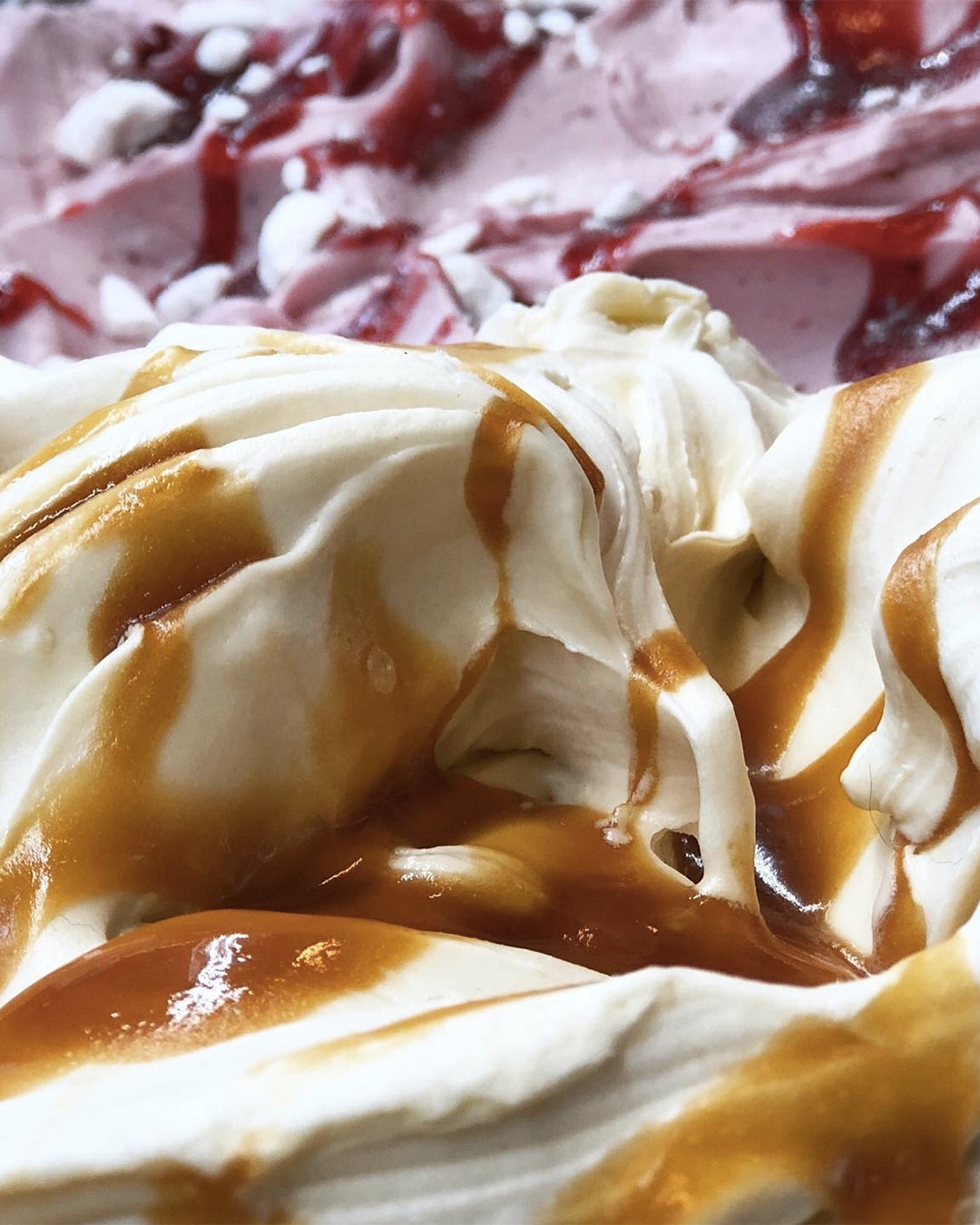 If you know your ice cream, you'll know about Little 'Lato—the bespoke gelato business whose ice-cold creations can be found at not one but three locations throughout the city. These guys are bringing some seriously incredible flavours to the table, including a few life-changing seasonal offerings (we're looking at you, Christmas Pudding) and even vegan alternatives. And we're not the only ones who love what these guys do—Little 'Lato scooped up a tonne of accolades at the 2020 New Zealand Ice Cream Awards, including the title of country's best gelato for their Speculoos creation (a gorgeous ginger-caramel combo inspired by the European cookie of the same name). You guys dig this ice cream too with Little 'Lato scooping several votes Pip stans their really innovative flavours, Abbie loves that even the vegan ice cream is creamy and best of all, Jessica loves Little 'Lato as founder Hannah Wood 'did a gelato-making course in Italy and she is goals, a total girl boss!!!'

Tucked away down a side street on the way to Matakana lies an institution of a scoop shop that's more than worth the minor detour. Charlies Gelato's award-winning gelato and sorbetto is made from scratch in very small batches, using their delicious seasonal fresh produce which is grown on-site. With over 40 flavours to choose from and a pretty garden in which to savour them, David and Jennifer just love their flavours that evoke the summer.

Ice creams and the beach go hand-in-hand, a recipe this waterfront café knows all too well. Takapuna Beach Café's hand-scooped gelatos and sorbets have won numerous awards and come in a range of sophisticated flavours including espresso, lemon curd yoghurt and vanilla and peppermint. The salted caramel gelato is to die for according to Mish and Alex loves that they serve gelato and not regular old ice cream. 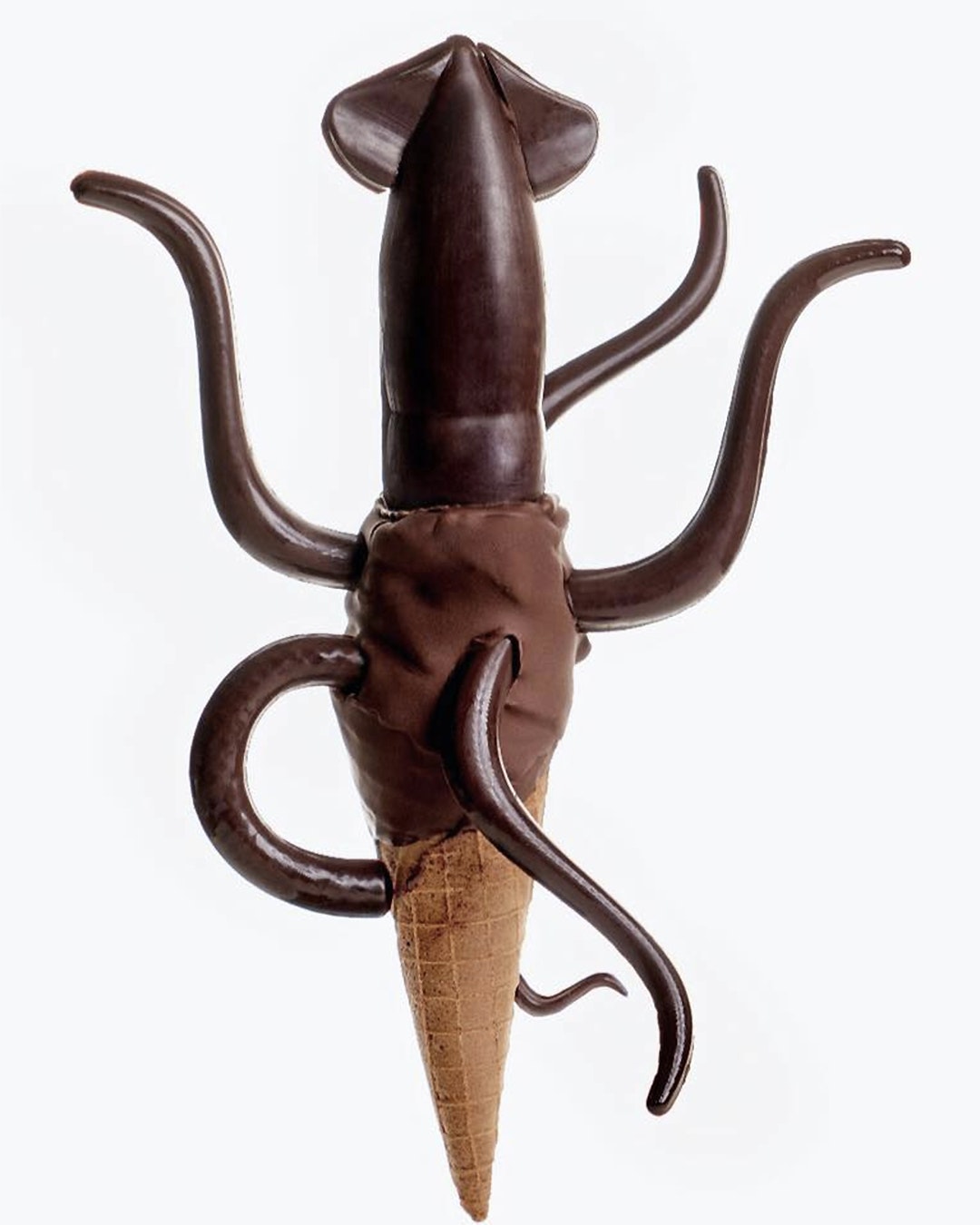 If Willy Wonka were to open an ice cream shop, we imagine it'd be something like Giapo. This inner-city outfit definitely sets the bar for originality, serving up epic creations that are known just as much for their looks as they are for their taste. Yes, you've no doubt seen its edible masterpieces popping up in your Instagram feed—perhaps the ice cream in the shape of the Sky Tower, or maybe the one that looks like a giant squid. The flavours, however, are far from secondary—largely inspired by the owners' Italian heritage and ranging from a delicious 'bueno' offering made with caramel, hazelnut praline and amaretti, through to 'Cher's chocolate'—a decadent scoop named after the American superstar who famously visited the store in 2018. Marion loves Giapo's creativeness, stans the bueno flavour and says their creations are worth every penny while Chris says Giapo is 'easily the most innovative ice cream store in the world' and we can't help but agree.

If you're in the mood for no-nonsense ice cream, Ollies Burgers & Ice Cream is where you'll find it. The retro fit-out (we're talking chequered floors, arcade games and a shiny red countertop) is reminiscent of the ice cream parlours of old, making it the perfect spot to enjoy a scoop of classic, Tip Top goodness—think hokey pokey, orange chocolate chip, goody goody gumdrops, gold rush and all the other fabulous flavours this iconic Kiwi brand has introduced to us over the years. Krista and Tuatara just love Ollies for their classic, nostalgic vibes. Alternatively, order yourself one of the eatery's super-nostalgic banana splits, complete with all the trimmings. 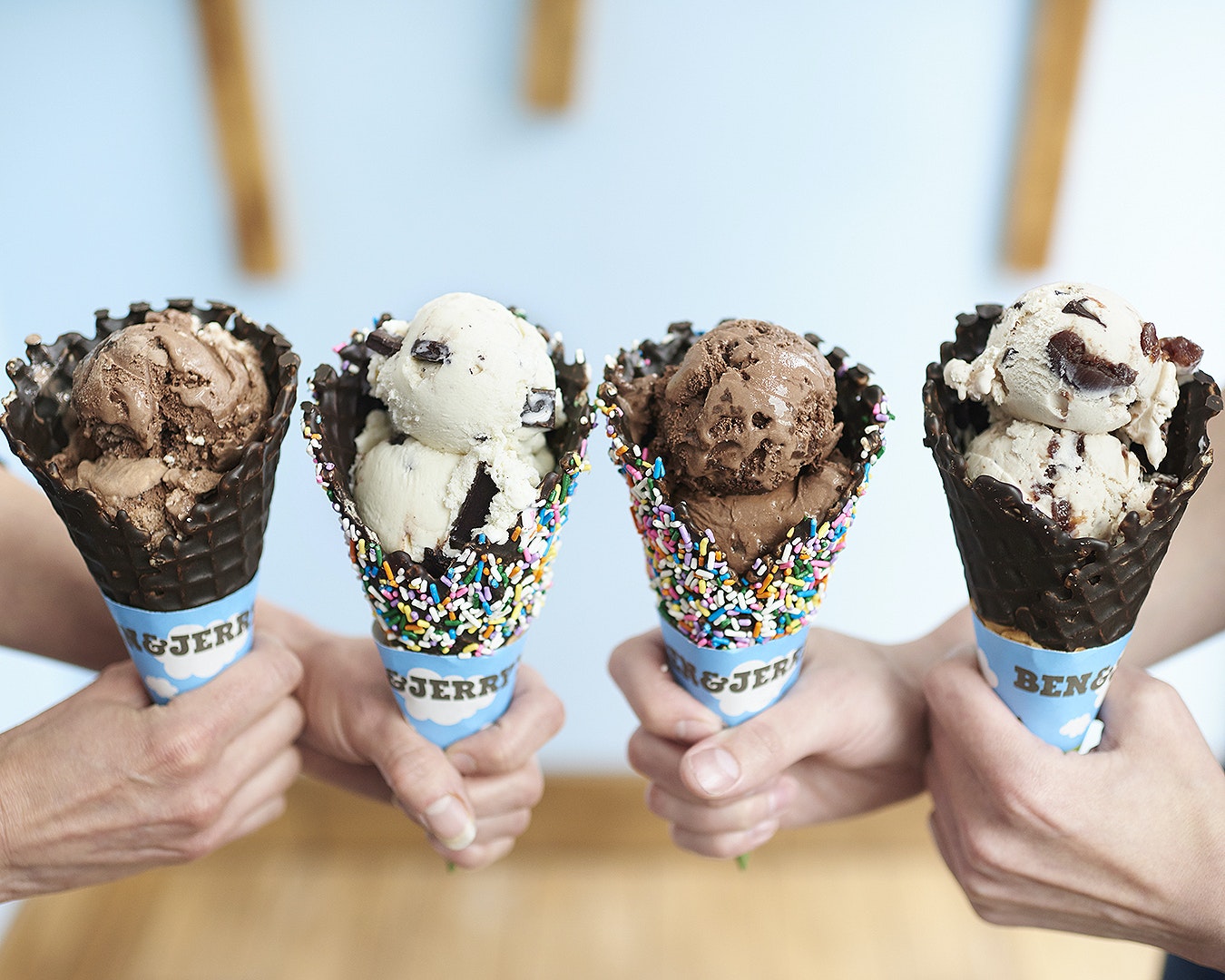 What started out as a venture between two friends (named—you guessed it—Ben and Jerry) in America more than 40 years ago is now one of the biggest and most recognised ice cream brands in the world. We for one can't get enough of their ridiculously decadent style of ice cream, which you'll find at their dedicated Scoop Shops around Auckland (while some flavours are also available at select supermarkets and other retailers). Take your pick of seriously drool-inducing options including a number of store exclusives, loaded with the likes of cookie dough, caramel sauce, brownie chunks, peanut butter, pretzel pieces... this is certified sugar territory. For the ultimate Ben & Jerry's experience, ditch the cup or cone and opt for a sundae instead. Hannah loves that Ben & Jerry's offer dairy-free ice cream and not just sorbet.

One of the newest ice cream parlours on our list, this little slice of deliciousness popped up on the shore at the end of 2020 after owners Hayley McRae and husband Mike Kitching decided to open their own real fruit ice cream store in Auckland. Having tried the aforementioned Charlies Gelato and deciding it was the best ice cream they'd ever eaten they were keen to bring it to Milford. Scrunchy Millers sling their own real fruit ice cream which means you don't have to drive out to a farm or up north for the good stuff and we love them for it. With eight delicious real fruit ice cream flavours available (including pineapple!) and the offerings from Charlies Gelato this spot is definitely worth a place on our list of Auckland's best ice cream shops. The best bit? As they're all made on-site you can combine as many fruit flavours as you like to make your very own real fruit creation! With ice cream sodas, banana splits and even affogato on the menu you'll be hard-pressed to settle on what to dig into first. It's Petra's fave spot by far for its real fruit ice cream as well as a crazy amount of flavour while Terri thinks they're so damn tasty with friendly staff. 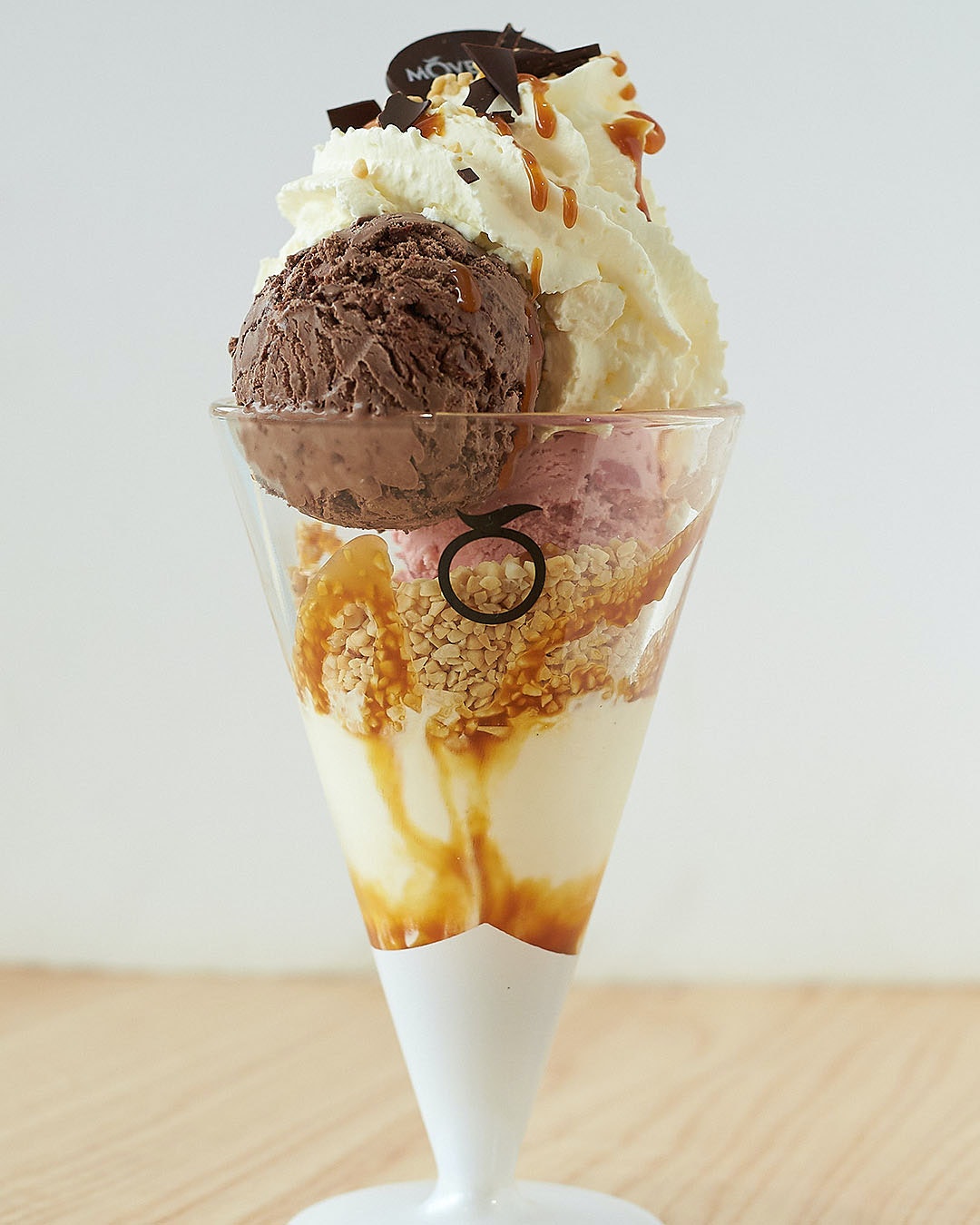 A fave among our readers, Mövenpick originated in Switzerland and now has over 150 stores worldwide, including a handful here in New Zealand—while select flavours can also be found in the freezer at your local supermarket. We definitely have our faves, including the pistachio, maple walnut and panna cotta raspberry—however, those with more traditional tastes will be pleased to know that they also sling a damn fine scoop of vanilla, chocolate and strawberry. And let's not forget about their legendary fresh fruit sorbets, which will legit give you chills. Naleen particularly loves their Mission Bay outpost for its good summer vibes and family memories, Sai for its ice cream with a view while Domini would like to shout out fabulous owner Mel at Mövenpick Takapuna. 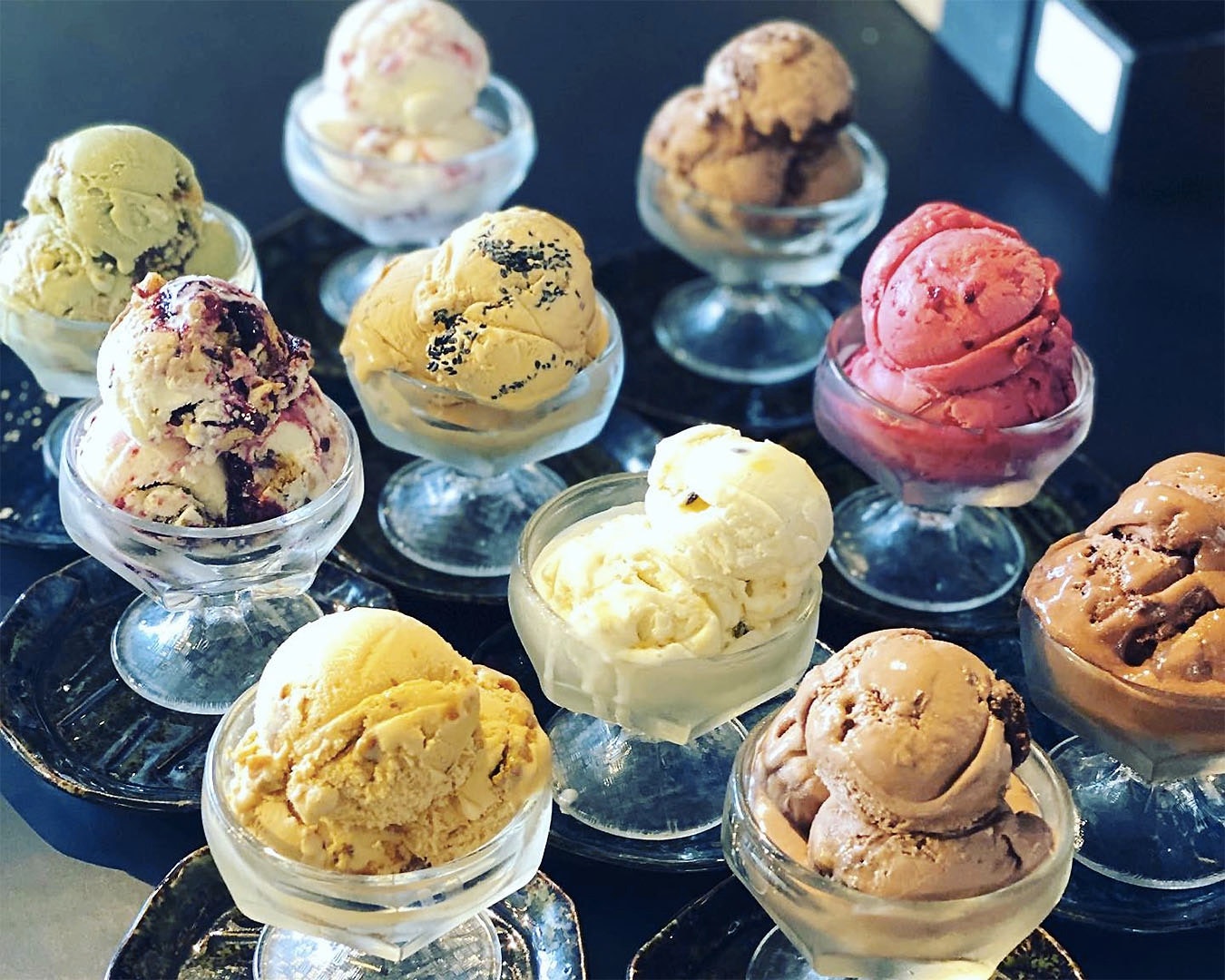 It comes as no surprise that a restaurant specialising in desserts also produces some pretty outstanding gelato. The cabinets at Miann are bursting with experimental flavours, often themed around other sweet treats (case in point, the pavlova—featuring berries, burnt vanilla and chunks of the beloved Kiwi dish with which it shares its name). And while the menu is ever-changing, one thing remains the same–delicious, one-of-a-kind gelato that will definitely have you coming back for more. 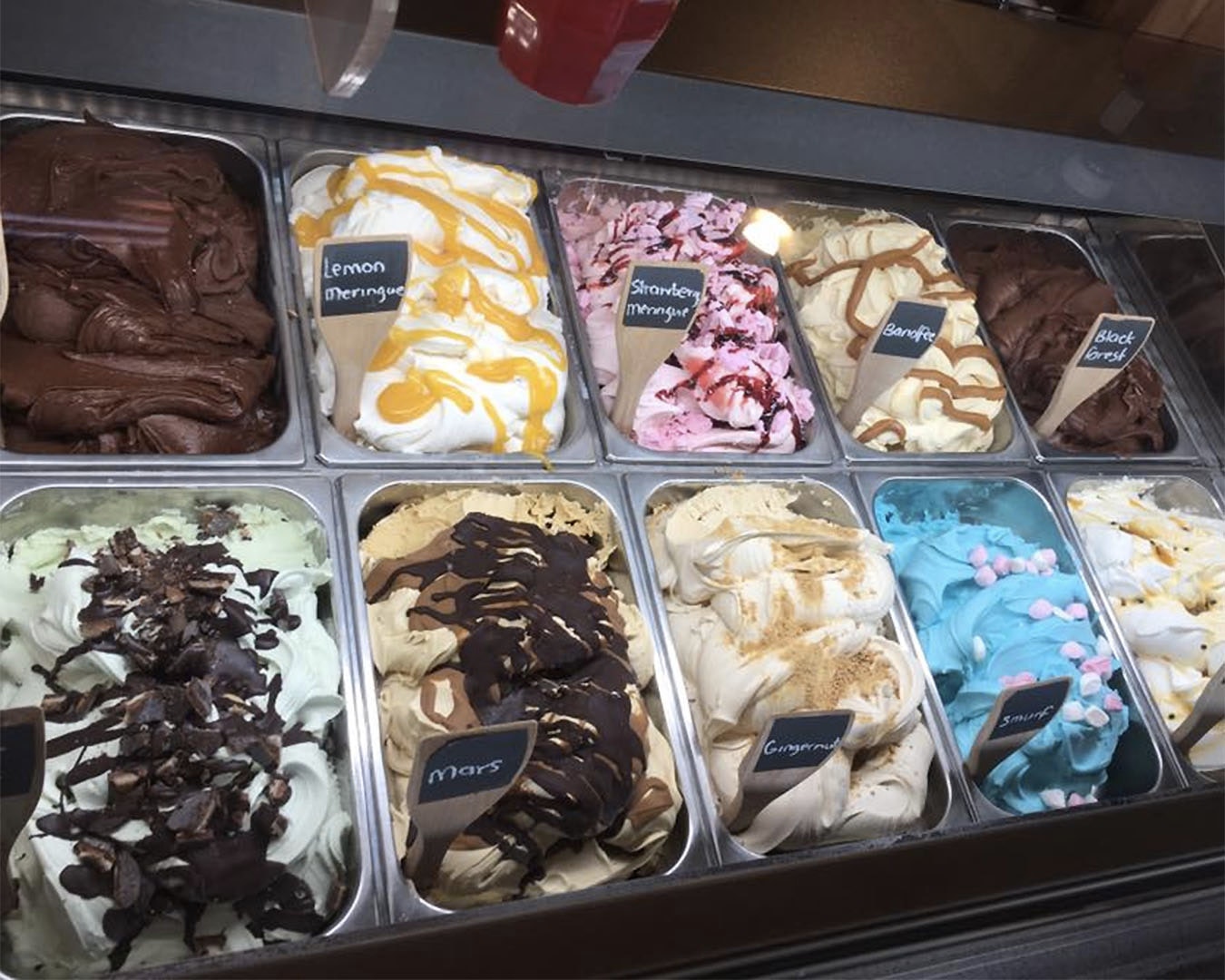 We'd gladly make the trip out west for a cup (or cone) of something cool from Juicy. Their real-fruit strawberry ice creams are some of the most generously sized in Auckland, while their fridges are home to a vibrant selection of handcrafted gelatos and sorbets. Some of the more novelty flavours on offer include pineapple lump, and Smurf (you can tell this one by the vivid blue colour, offset by tiny pink and white marshmallows). What you might not know is that these guys also have a shop in Mission Bay, albeit under a different name (Gelato New Zealand)—where you'll find the same epic range of ice creams, gelatos and sorbets. Could there be a more perfect way to cool off after a day at the beach? We think not. 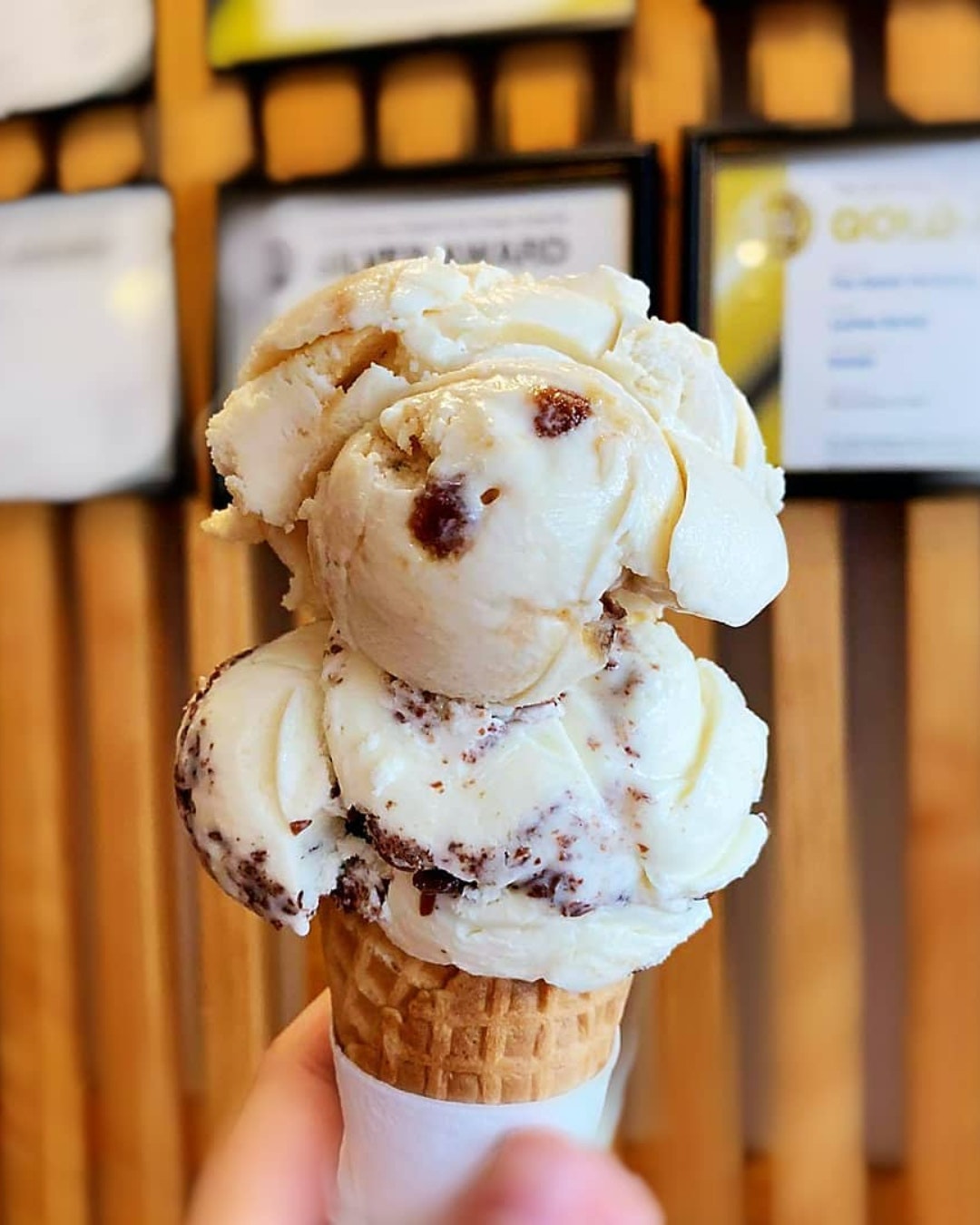 If gelato's your thing, you're probably familiar with the superstars at The Gelato Workshop. These guys really know their stuff. Crafted with traditional techniques and quality ingredients, the gelato pays a delicious homage to their time spent in Italy. Go for creamy Belgian chocolate for something seriously delectable, or a refreshing scoop of pina colada to get the party started. Local, seasonal produce takes centre stage in flavours like the strawberry and feijoa sorbets, which are both fan-faves. The best bit? You can even bring your pooch along for a scoop of the banana gelato that's made especially for canine customers.

Can't get enough of the sweet stuff? Here's where to find Auckland's best doughnuts.