5 Of Perth’s Best Cinnamon Buns To Hunt Down

There’s nothing better than a cinnamon bun; the warm bun, the spicy cinnamon, the sticky icing, and maybe even the crunch of a walnut if you’re lucky. They’re the perfect morning or afternoon snack (or even breakfast, if you’re feeling cheeky) and they really hit the spot when you’re craving a tasty, warm treat on a cool winter’s day. If you’re hankering for a cinnamon bun, don’t just stare longingly at Cinnabon pics, go out and get one.

Here are some of Perth’s best cinnamon buns to hunt down.

If you’re looking for a twist on the typical cinnamon bun, then you’ve come to the right place. Spirals Cinnamon has plenty of amazing new flavours, like their cardamom bun and honey and fennel bun. Plus, they’ve also got the flavours you already know and love, like cream cheese, and sticky maple. If you just can’t decide, don’t worry; they’ve also got an entertainment pack, where you can get a whole box full of mini buns in every flavour, so you don’t have to decide which one you want—you can eat them all.

If you still can’t get enough of wacky flavours, head to Sinamon. They’ve got regular all-rounders, like the original cinnamon bun, chocolate bun, or hazelnut, but on top of that, they also have a new flavour every month. For winter, you can check out Sinamon’s dark chocolate cinnamon bun, where everyone’s favourite original flavour is completely covered in dark chocolate. There’s honestly nothing better than that. They change the flavours every month, so if you want a taste of the seasonal buns you’d better get in quick. 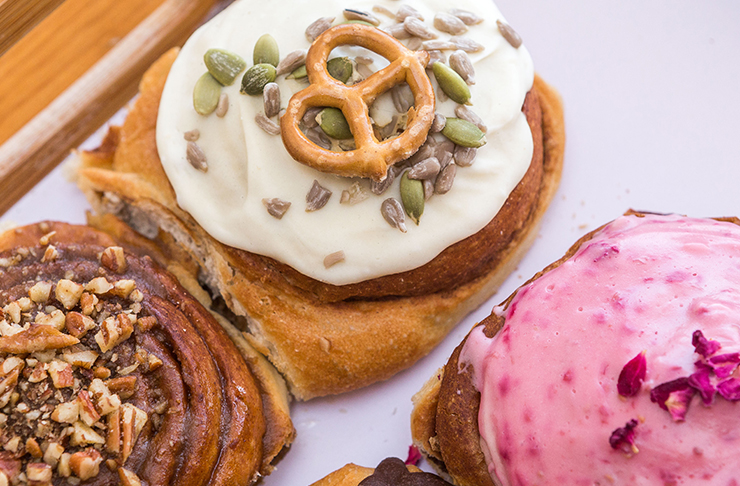 Good old-fashioned cinnamon buns are hard to beat, and North Street Store really fuels your inner child with their incredible cinnamon buns. They’re so good that they’re famous around Perth, so if you want to grab a few for yourself, you’d better head down to the store. Not only do they have fantastic cinnamon buns for one, but they’ve also got a whopping cinnamon bun cake. It’s the size of around ten cinnamon buns combined and is great to share, but when it looks that delicious, you know you want to have a crack at it all to yourself.

Joe’s Bakery is known for its amazing pastries—but did you know they also have incredible cinnamon buns as well? They do cinnamon buns the traditional way but make them special to Joe’s with the mile-high cream cheese icing and walnuts sprinkled on top. If you need a little more cinnamon kick in your life, you should definitely try their cinnamon doughnuts.

Everything’s sugar and spice and all things nice at this cafe, including their tasty cinnamon buns. You can get them every single day of the week, so you’re never without a fix. Sugar and Nice start pumping out the cinnamon buns at 8.30am, so if you hurry you can snag a treat before work and kick the day off to a sweet start. With their delicious cinnamon sugar centre and incredibly tasty glaze, these mouth-watering buns are sure to become your cheat day snack.

Need to get your hands on more baked goods? Here are Perth’s tastiest croissants.