If there’s one thing we sorely missed during lockdowns, it was meeting up with mates at the local for a drink. But with Sydney now open again just in time for those prime summertime vibes—it’s officially the season to be out to support your favourite venue.

To help get behind Bundaberg Rum’s Raising The Bar initiative—which is all about supporting bars, pubs and clubs around Australia—we’re rounding up some of the best spots in Sydney for you to visit this summer. After all, it’s only right that we show some love to the venues that continue to give us so much.

Cocktails, schnittys, beer gardens, rooftops, big-screen TVs, cold schooners, meat raffles, celebratory lunches, etc — this is what we can look forward to these warmer months around the city. We’ve even thrown in some coastal and regional venues in case you’re packing the car and road-tripping out of here. Just remember to always have a backup plan to get home safely without driving.

Here are 15 of Sydney’s top summer venues so you can get back to supporting and enjoying your local.

Anyone living around Sydney’s Northern Beaches is likely intimately familiar with the Harbord Hotel, formerly known as the Harbord Hotel. Last year, the century-old local’s favourite had a much-needed refurb with delightful results. Just 200 metres from Freshwater beach, the Harbord is now a surfy, California-inspired joint that soaks up the sun and pours fresh local beers—the perfect summer pub.

On bustling South King Street, hiding behind the façade of the closed butcher shop that once called the space home, is Earl’s Juke Joint. The New Orleans-inspired bar has been a Newtown local’s favourite since it opened back in 2013. You can expect spirit-packed shelves behind a gorgeous wooden bar, lit mostly by candlelight. From it, natty wines and craft brews are being poured, and crazy cocktail concoctions are being shaken. Only good vibes here.

Mixing some century-old architecture and major speakeasy vibes in a pretty sizeable venue offering a bit of everything—Hotel Harry is always a good shout for Friday night drinks. On the edge of Surry Hills, you can choose your own fun here. From cocktails out the front by the bustling city streets to a glass of vino and classic burgers inside. Or head upstairs for cocktails, which also hosts live DJs and a makeshift dancefloor on weekend nights. 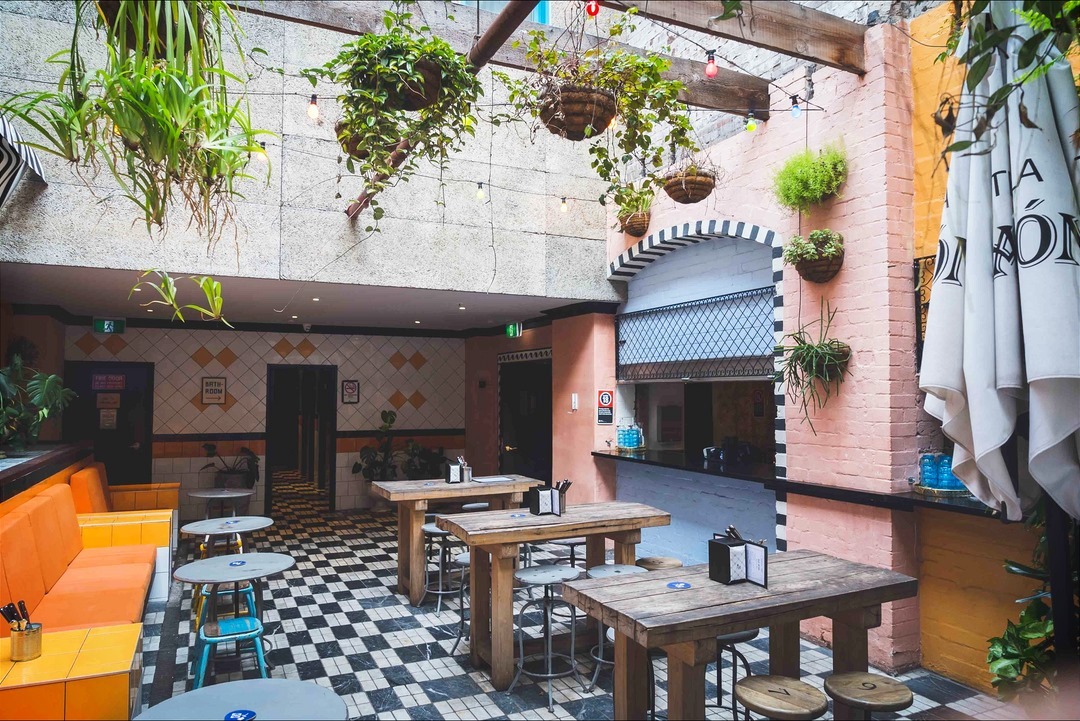 Serving locals for over 135 years, craft beer is the name of the game at this Chippendale pub. With 28 taps, The Rose Hotel keeps a tasty rotation of craft brews, showcasing plenty of Sydney’s best across every range and style. But if that’s not your game, they also keep a pretty nifty collection of whiskies from around the world and natty wines or cocktails for you to enjoy out the back in the packed-out outdoor courtyard.

There’s no better overnight stop-in if you’re driving up the NSW mid-north coast than the beautiful town of Bellingen. Find a place to stay in town and make sure you head to Bellingen Brewing Co. for a beer and a hang with locals. Brewing their beers and ciders on-site, the joint feels more like a bar than anything else, with the setting sun shining through the building’s wooden warehouse walls and the smell of woodfired pizzas enticing anyone walking past to come in.

Perhaps no Sydney pub says ‘community’ quite like the Public House in Petersham. There are plenty of good reasons why this Inner-West pub is a die-hard favourite amongst locals. The dog-friendly spot has a big focus on craft beers on tap, as well as out the back with a micro-brewery and bar from Marrickville’s Batch Brewing Company. The PHP loves to blast classic rock tunes, spray you with a bit of cooling mist in summer, serve up a few delicious woodfire pizzas and offer one of the area’s nicest covered beer gardens to cool down during the warmer months.

Can we really put together a list of Sydney’s best summertime pubs without including Watsons Bay Boutique Hotel? With a waterfront location envied by any other venue that feels entirely detached as an escape from the city—the answer is an emphatic no. Head out to Watsons Bay for its beautiful surroundings, Hamptons-chic style fit-out, outdoor summer ambience, live DJs on weekends, killer food menu and a fresh frosé cocktail to help take it all in. 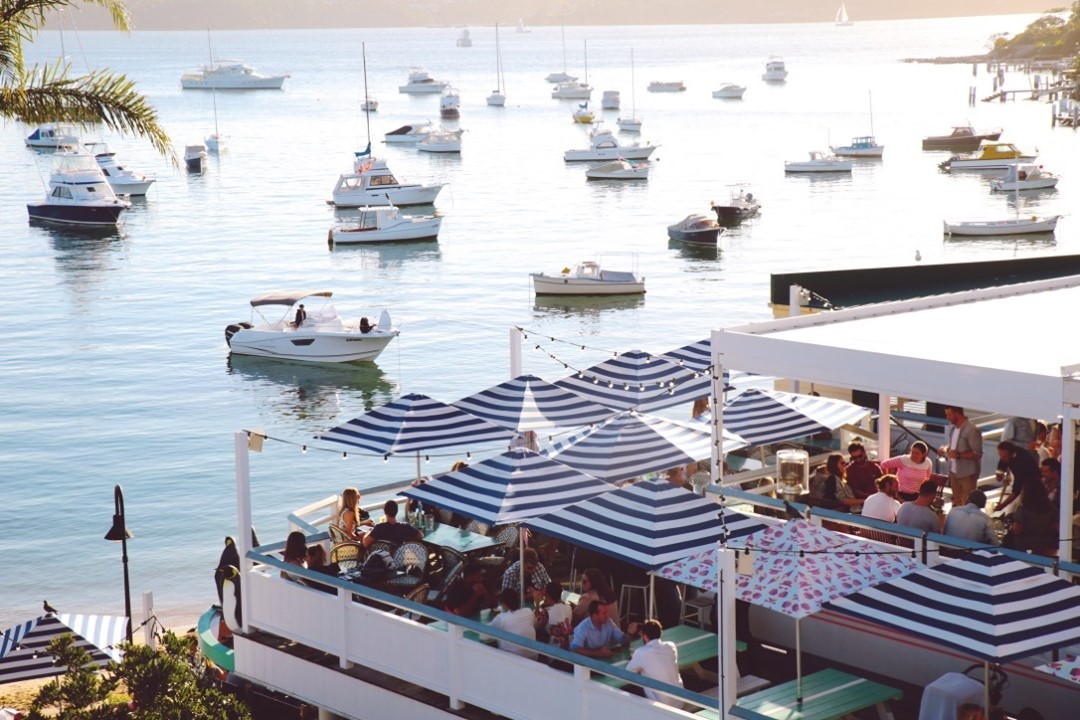 Just a 90-minute drive south of Sydney sits the ideal day trip destination of The Southern Highlands. Past the region’s central suburbs, you’ll find the Burrawang Village Hotel, a historic country town mansion with lush green gardens turned into one of NSW’s best country pubs. Order a beer inside the charming old building’s 360-degree wooden bar next to an old brick fireplace and take a seat outside in the large courtyard or out in the grass overlooking Burrawang paddocks. Cold beer in hand and fresh country air blowing on your face.

A summertime drink doesn’t always mean going outside. Opening nearby Cronulla beach in 2013, The Blind Bear is an American-style speakeasy bar with major whisky saloon vibes. The atmosphere is set with dim lighting, the sound of a shaking Boston glass, the smell of pouring craft beer taps and the feel of bespoke antique wooden furniture. Order from the classic American eats menu and the 100+ whisky list for a tipple to match.

If you need a beer in the Surry Hills area, look for the giant horse keeping a watchful eye over Crown Street. Downstairs at The Horse: rack up for a game of pool or sit down with a greasy fried chicken burger in front of the giant TV playing sport all day and night long. Upstairs: order up a craft schooey and enjoy some arvo sun in the open courtyard. And if you need a hump day competitive activity, pop through for the ultra-popular Wednesday night “Sh!t Pub Trivia”.

Directly across the road from Hyde Park and hidden deep beneath the ground sits Ramblin’ Rascal, one of Sydney’s best subterranean bars and the perfect after-work drinks spot. Opening in 2014, the tavern offers a bit of everything from $6 tinnies to French brandy and Australian gin cocktails to the luxe-as-hell $150 “Coup De Grace” cocktail. A drink made with The Balvenie 30 Year, Scottish breakfast cold-pressed tea syrup and Angostura bitters, served in a Waterford crystal glass.

The Unicorn is all about paying homage to the classic Australiana pub vibe—most overtly demonstrated by the giant mural map of Australia covering its wall. It’s not the kind of place you’ll find big TVs playing the footy, but you will get pool tables, a dartboard, tons of Aussie craft beers, spirits and wines, a banging weekend dancefloor, Sydney’s own Mary’s Burger on the menu and one of the very best chicken schnitzels this city has to offer. Head downstairs for the restaurant and a proper date atmosphere. 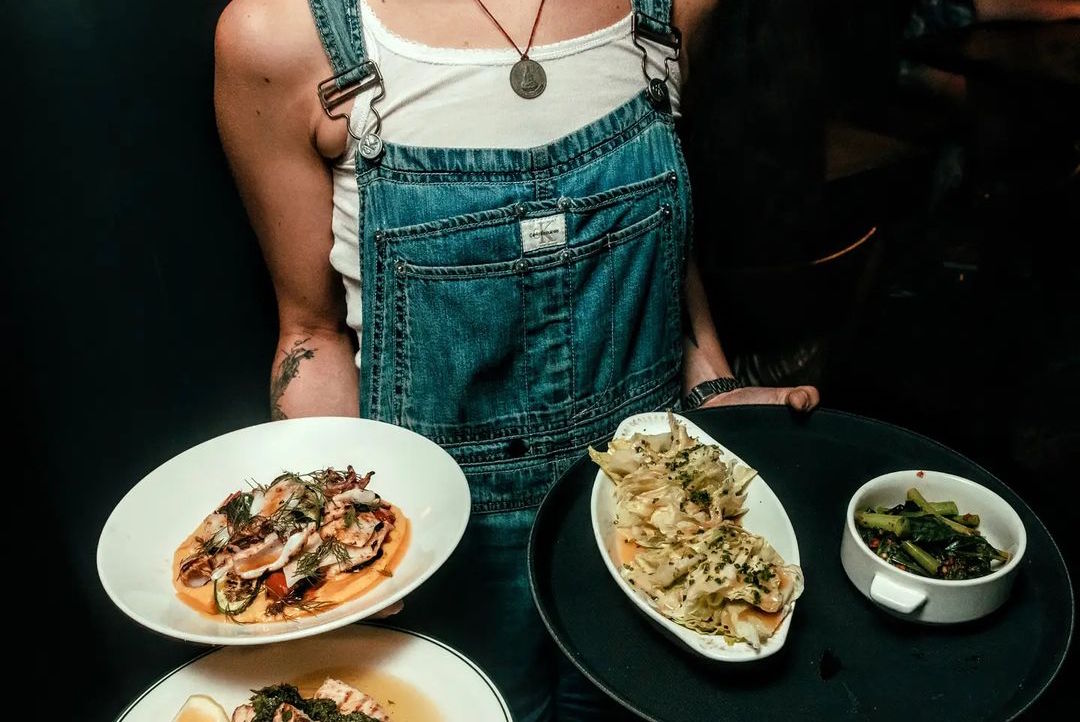 Passing through the quaint beach town of Yamba without a drop in at the Pacific Hotel should officially be a crime. It’s impossible to miss the iconic, white-painted waterfront pub, which sits proudly on the cliff’s edge above Main Beach—and no exaggeration offers one of the best schooner-drinking views in the country. Teeming with friendly locals and nothing but good times, this is where you want to be on a Saturday night.

We know Sydneysiders don’t need much prompting to road trip up to Byron Bay. And when you’re done sunbaking and cooling down with a dip at the famed town’s Main Beach, walk a few metres and grab a drink at the Beach Hotel. Boost that beach holiday with a strawberry daiquiri and a pizza, and make sure to keep an eye out for the beloved live music spot’s gig guide.

You can basically close your eyes and point somewhere in Paddington to find a pub. If you’re walking up Underwood Street, take yourself to the back streets local’s favourite, The London. Standing since 1875, the charming, light-filled corner pub oozes of British flair crossed with Aussie pub vibes and spans a couple of levels. Dial up a pizza and a Bloody Mary for your Sunday sesh—it’s hard to go wrong.

In support of Bundaberg Rum's Raising The Bar initiative, we're reminding you, #dontforgetyourlocal. If ever there were an excuse to make new memories this summer, it’s by organising a well-deserved get-together and by throwing your support behind new and old favourite venues. We’ll cheers to that.