Where To Find Sydney’s Best Fish And Chips

​​We've teamed up with Oz Lotto this summer to bring you the best of big Aussie fun. Want to discover more? Click here to check out our Celebrate Summer hub.

Fish and chips: this Australian combo nails all things deep-fried, grilled, oily, crispy, served on a plate or folded in paper, and while they are a summertime staple, paired with long beach days and too much sun, they also work as a soul-soother in colder months, best-consumed seaside, rugged up and spotting whales.

Here are the best fish and chips spots in Sydney. 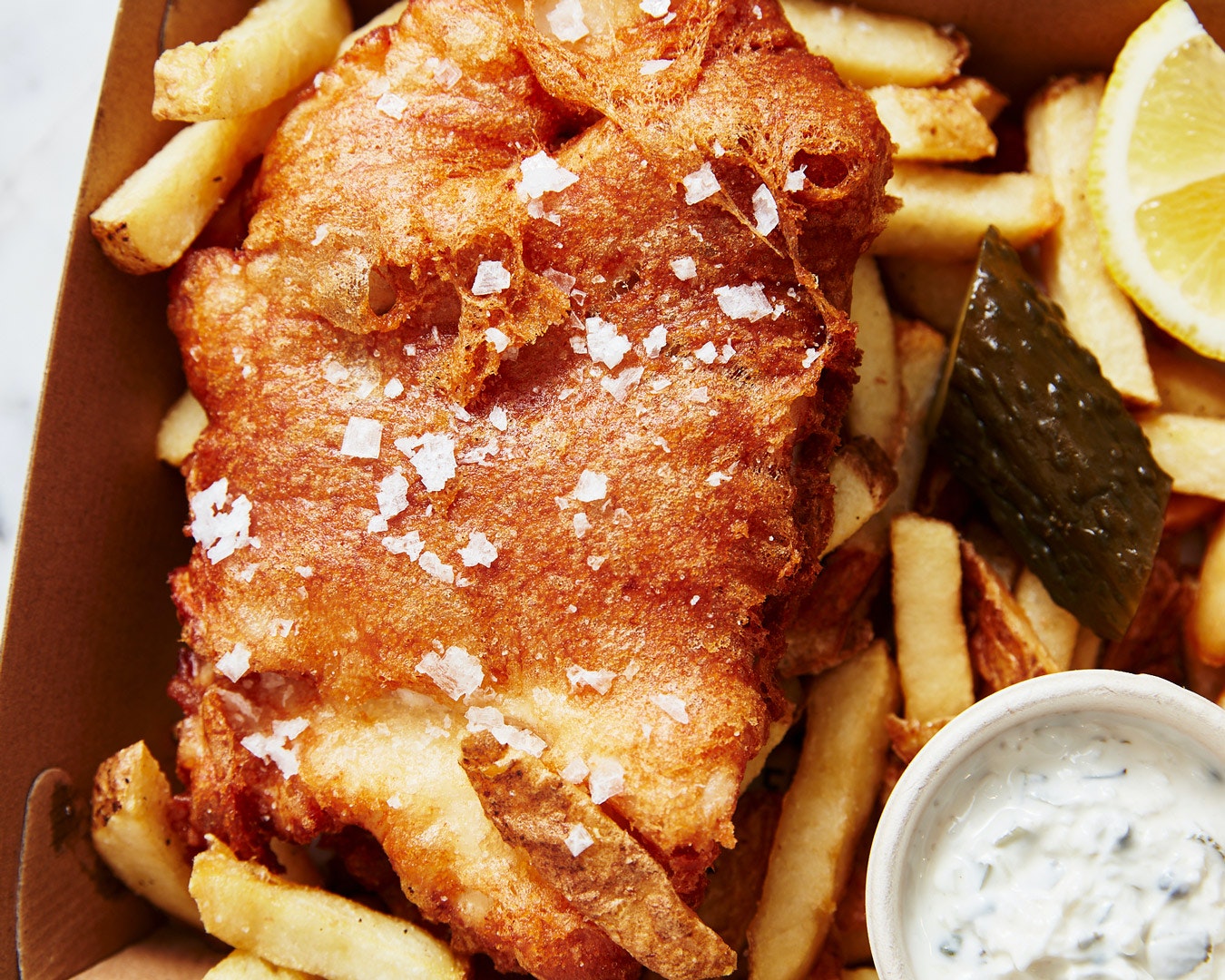 From award-winning chef and pioneer of sustainable seafood Josh Niland, Charcoal Fish is a totally new idea for Sydney. It's a fish and chip shop concept that pairs the nostalgia and simplicity of a charcoal chicken shop with his new-school approach to seafood. The idea is to plate up accessible, restaurant-quality chargrilled fish that’s both friendly but equally as impressive as we’ve come to expect from the renowned chef and his team.

Charcoal Fish serves just one fish—Murray cod from Griffith in NSW. The heads, frames, and fins of the fish make gravy, which becomes the sauce for a gravy roll filled with picked rotisserie cod fillet. Fish collars get grilled over charcoal and served with a fermented tamarind hot sauce, like chicken wings, but fishier, and there's your classic batter-fried Murray Cod served with salty chips, yoghurt tartare, sour gherkin, and lemon.

Jose Silva and Manny Paraiso wanted to draw on the nostalgia of after-school snacks (like potato scallops and hot chips), and give it a little more polish without forgoing the casual essence of fish and chips. And, since opening in 2018, FICH has earned itself a rep for dishing out some of the crunchiest, freshest fish and chips in Sydney. We love that FICH has a sustainable mindset and their $10 snack packs are perfect if you are in the mood for some battered goodness but don't want the food coma.

Out Of The Blue

Home of the famous deep-fried Mars Bar, this Sydney icon is fresh, family-run, and a little bit French. When Jean-Marc and Sophie Gubian arrived in Sydney in 1986 they fell in love with the Aussie way of life and the Aussie classic: fish and chips. Continued by their son Julien and his girlfriend Matiou the legend of Out of the Blue (or OTB—if you know, you know) lives on. For locals, it goes without saying that these guys do one of the best fish burgers in Sydney. 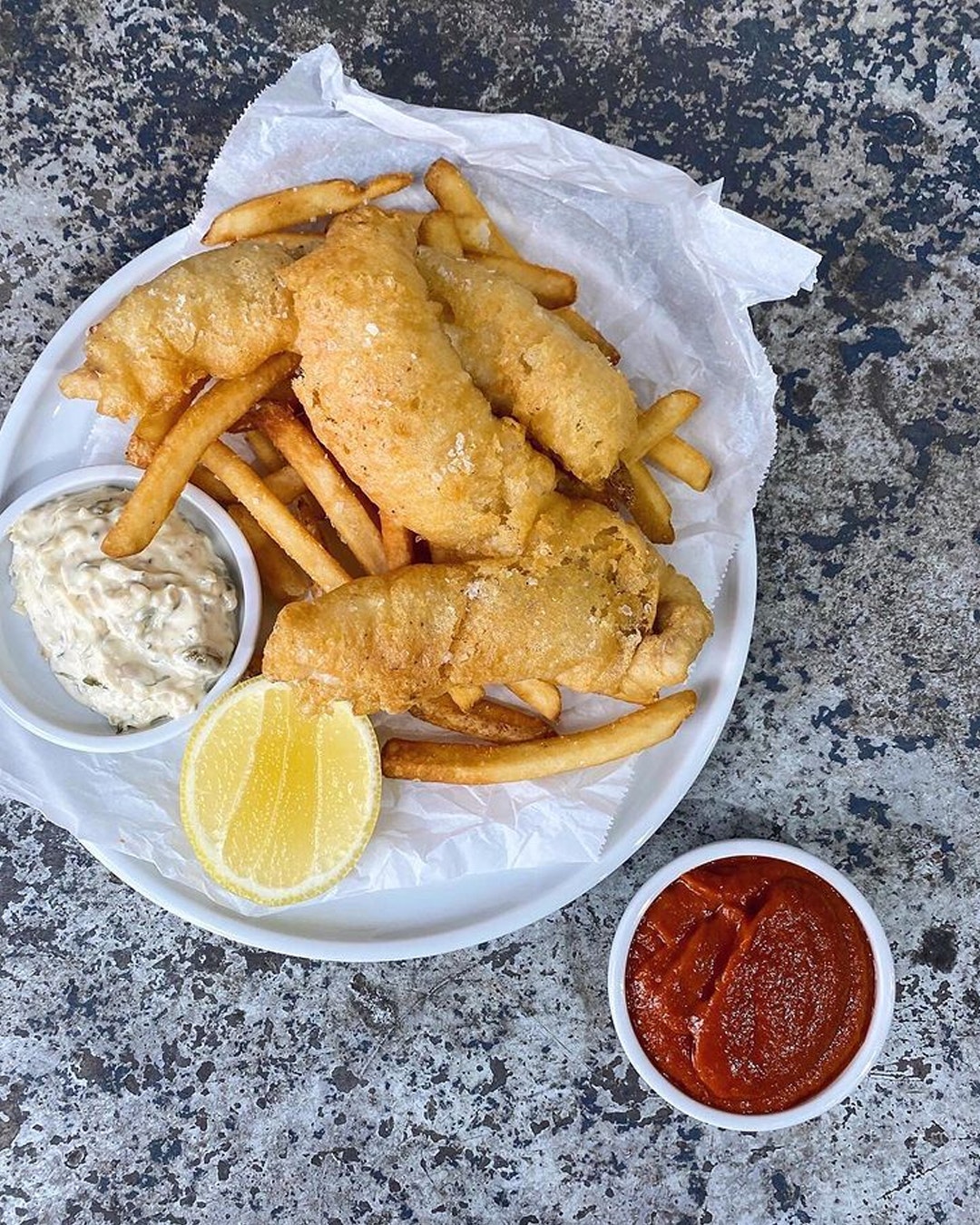 FISH SHOP is a "fine-casual" riff on the classic fish and chip shop, with the same sea breeze vibe but slightly more polished offerings on the menu. Led by head chef Joel Bennett, who you'll know from Peppe's, Bistrode, and Three Blue Ducks, the fish is sustainable and the menu is seasonal, healthier than your typical beer-battered flathead wrapped in newspaper, and with a Mediterranean mood.

Costi’s is a local fave known for its "famous fish" and affordable prices (a box of battered fish and chips from Costi’s will only set you back $8.90). They also have a whole heap of grilled fish options for those trying to keep things healthy. With locations all around Sydney—you’re likely not too far away from a Costi’s and a killer serving of fish and chips.

Located on an unlikely stoop in Surry Hills, the fish and chip fare at Mohr Fish is lightly fried and fleshy, and with a team having churned out the good stuff for more than a few decades—our heart will always take us back to this gem. 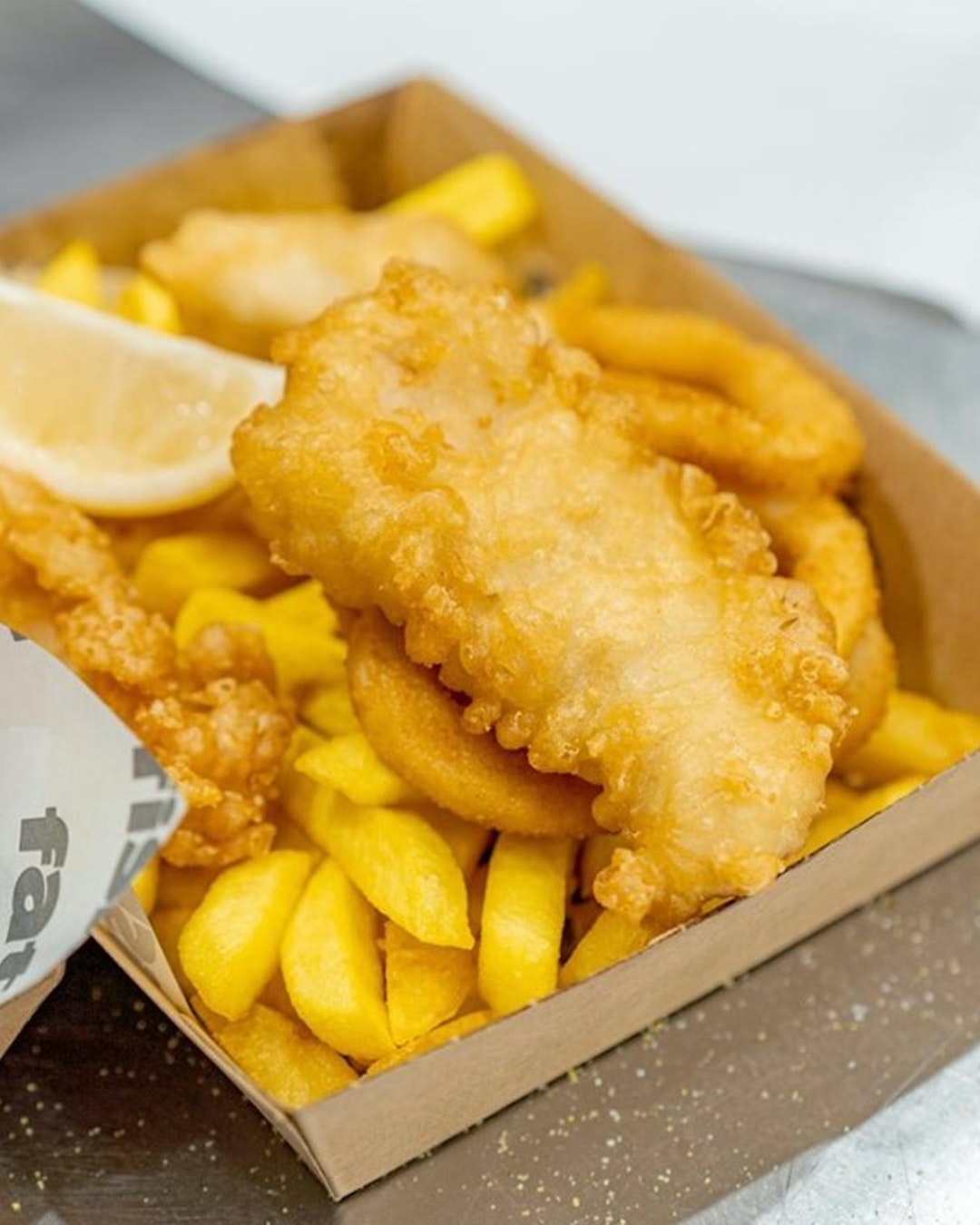 What happens when three generations of a family make fish and chips for over thirty years? Fat Fish happens, that’s what. In other words, you get the fried and crispy seafood combo you’ve always wanted. Their mammoth potato scallops are a must-try.

Turns out, some of the best fish and chips in Sydney come straight out of Crows Nest. Headed by Joel Katz, Joe Ward, and Mark Jensen, Salmon And Bear does most of its seafood in a Mibrasa oven: a certified coal-fired "beast" of sorts that seals the fish on the outside, crisping fish skin to absolute perfection, while keeping everything moist on the inside and imparting som epic charcoal flavour. Dining with friends who don't do seafood? These guys also do a ripping steak.

Fish At The Bay

Fish At The Bay is Rose Bay's local and family-owned seafood joint serving up everything from high-quality produce to old-school fish and chips. For big gatherings, order up the prawn, oyster, and sashimi platter, an ornate spread of all good things from the ocean (and don't forget a few large orders of chips).

At South Beach Seafoods in Cronulla, the fish and chip snack pack reigns supreme. Taking up prime real estate in official Chiko roll country, the ocean snacks you can nab up here are undisputed champions so keep your eyes out for the crumbed oysters at $2, Tasmanian scallops for $2.90, and the marinated octopus for $10.90—nothing will break the bank. 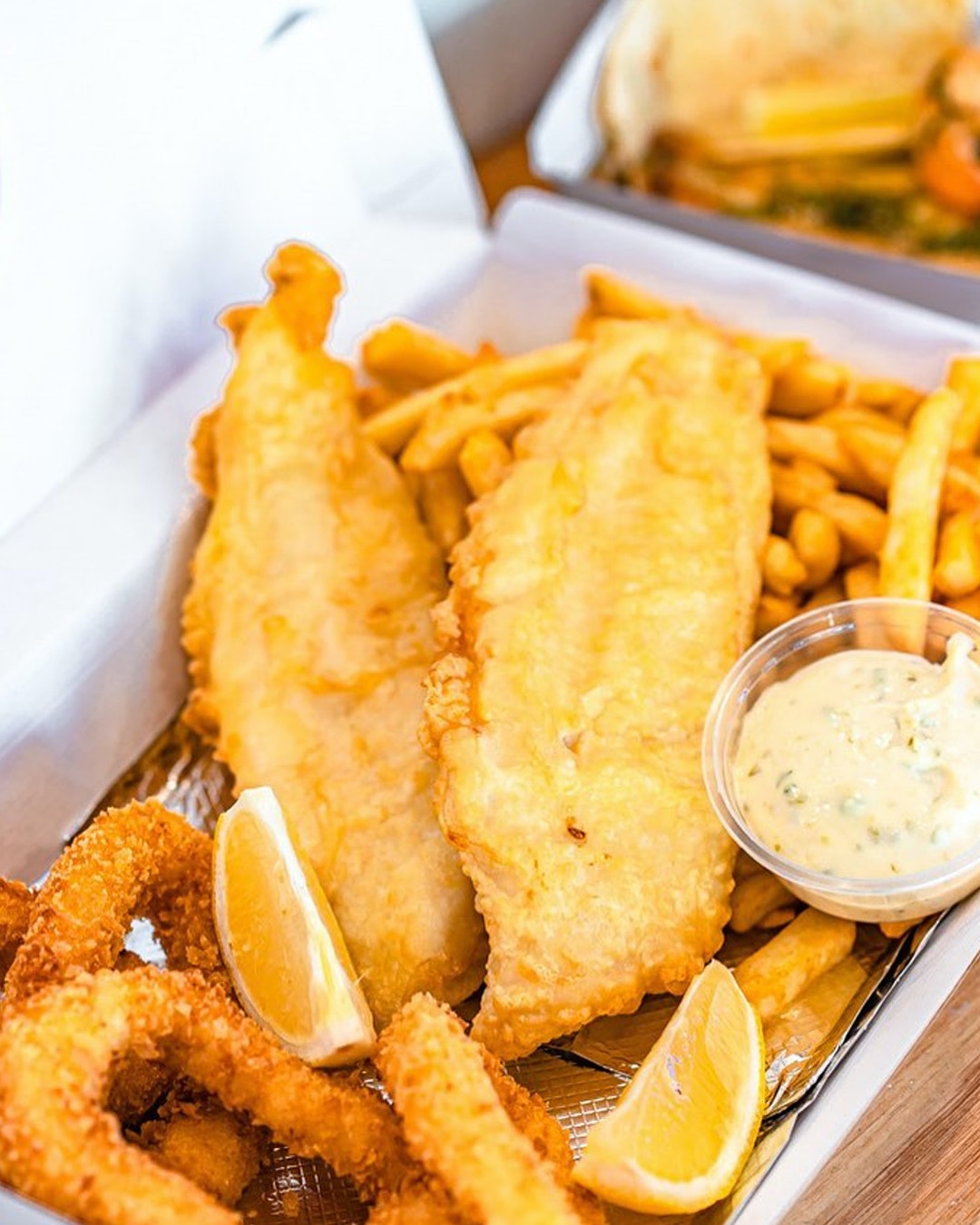 Don’t be fooled, Just Hooked is not your average fish shop. Here, the sun shines brightly on this fish shop’s signature golden Kataifi (a little like baklava) prawns which get drizzled in honey and it’s pretty much the combo of the century. Fish cocktails will only set you back $1.80 here and we also need to shout out the potato scallops—a salty halo that goes down a treat after a beach swim. You can also crunch into the ‘Barra Schnitz’ box with herb-crumbed barramundi with chips or brown rice and salad and, look, just throw in a  side of fish tacos too—just because.

Oceanheart Seafood is a family-run haunt that has been thriving in Brighton Le Sands since the late '80s. Famous for their in-house calamari (made from a secret recipe), you can order anything from a couple of fish cakes to a whole lobster, or go to town on fillet combos which all come with chips, squeeze sauce, a lemon wedge, and a drink.

This nostalgic little shopfront has been going hard for more than 20 years, and sports a classic, no-frills menu bound to amp you for post-beach-day feeds. All your favourites are here, from the classic beer-battered fish and chips to potato scallops, calamari, and more. It may not be by the seaside, but Old Fashioned Fish and Chips is a favourite for a reason. 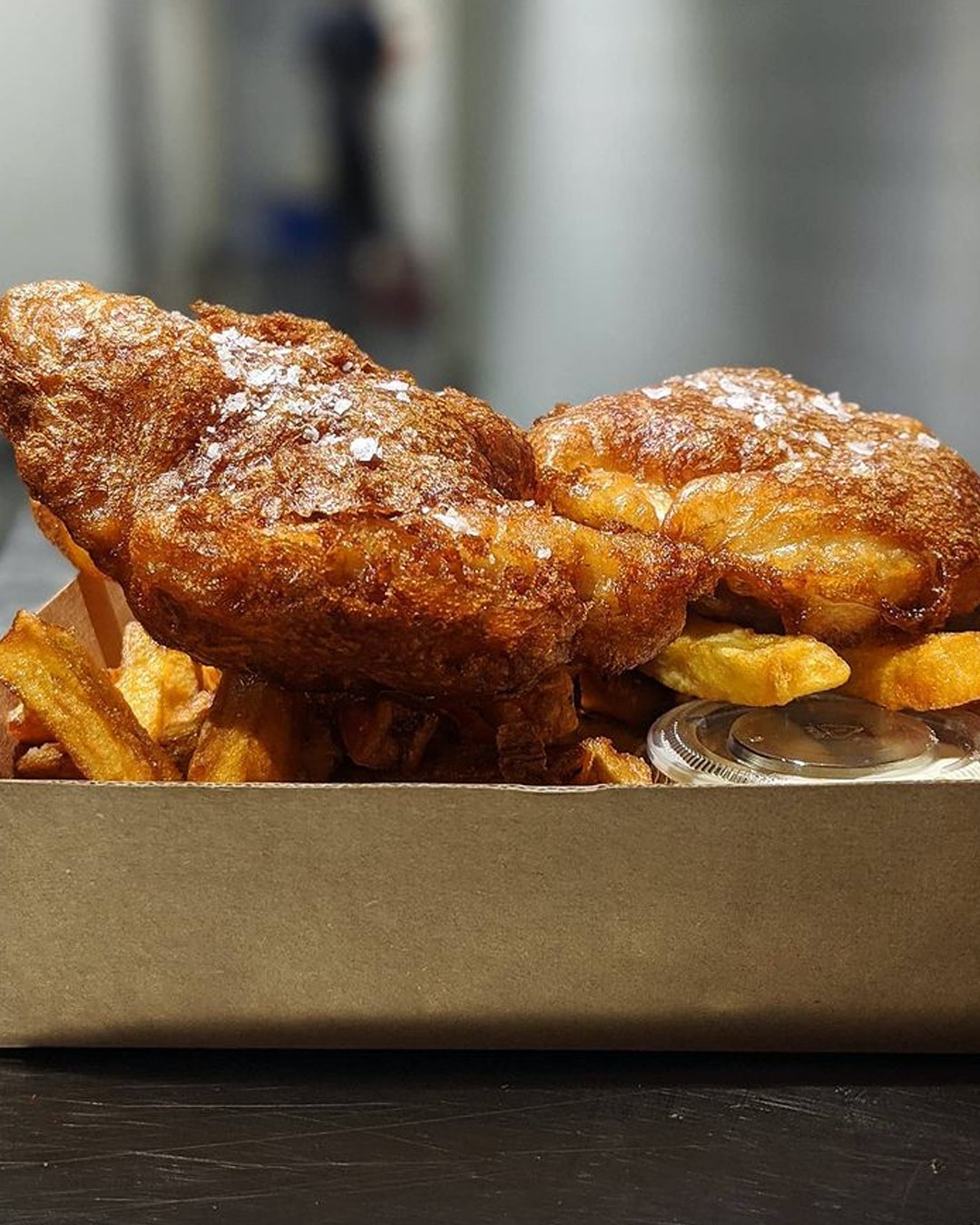 Another entry for Mr Niland on this list—Fish Butchery is the takeaway shop (sort of) adjoined to the restaurant that started it all, Saint Peter.  Just a few doors up the road, this gem serves up fish and chips just the way we love them—with a big battered piece of deep-sea bream alongside thickly cut chips, pickled gherkins, malt onions, and yoghurt tartare sauce. As well as the deep-fried deliciousness of a box of classic fish and chips, it's here you can pick up Niland's fish burger patties, cuts of hard-to-find sustainably caught fish, prawns, and so much more.

This little Eastern Suburb institution has made a name for itself by making fish and chips, just the way they were intended. Because you don’t mess with perfection, the menu at Sea Cow rarely changes. They’ve got bottles of vinegar on the tables and it’s BYO—what more could you want?

Everybody knows that if you’re looking for a quality take on ye ol’ fish and chips, Fishmongers has this staple Aussie combo down pat. Order up battered or grilled hoki with hand-cut chips and tartare sauce, or go all out and dig into an epic Mongers Box filled with all the battered goods.

Now, work your way through this list of Sydney's best pies.