Raise A Schooner At 15 Of Sydney’s Best Beer Gardens

The beloved beer garden. A spacious habitat where humans come to meet, discuss the daily grind and, most importantly, sink glorious, golden beers amongst the shady foliage.

Although us Aussies can’t claim its creation (let’s give a collective thanks to Germany), the tradition has certainly made an impression, and it’s one that’s here to stay. So, let’s raise a schooner, and make a toast to Sydney’s most impressive outdoorsy beer hangs.

Beach Road Hotel is a shining beacon of beer garden hope in the Bondi bubble. This institution is the perfect place to grab a meal, hang out with friends, play pool, and catch some live music. The beer garden space, otherwise known as “The Valley West Outside”, features plenty of tables and stools to get around plus a sling of festoon party lights to drink under. 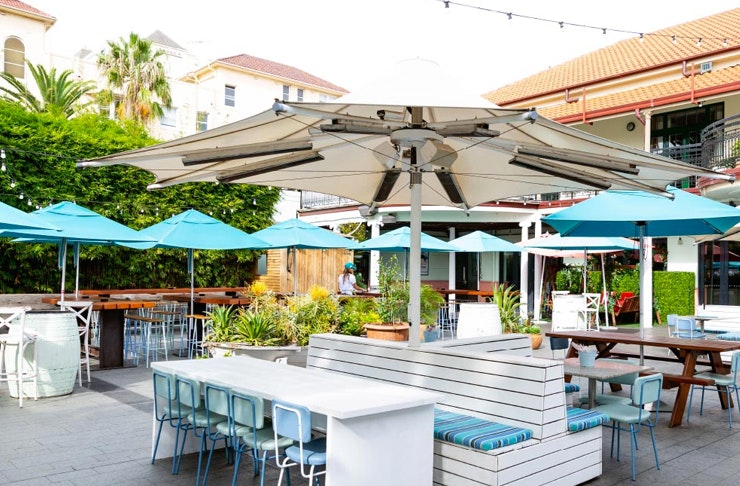 Because where else can you score coastal views and garden brews in Sydney? Coogee Bay Hotel (or “The Bay” if you’re a regular) is a heavy-hitter in Sydney with one of the biggest beer gardens boasting craft beers, wines, and cocktails. When the weekend hits you can expect a solid line-up of bands and DJs, and come Friday and Saturday, you can also hang here until 3am. 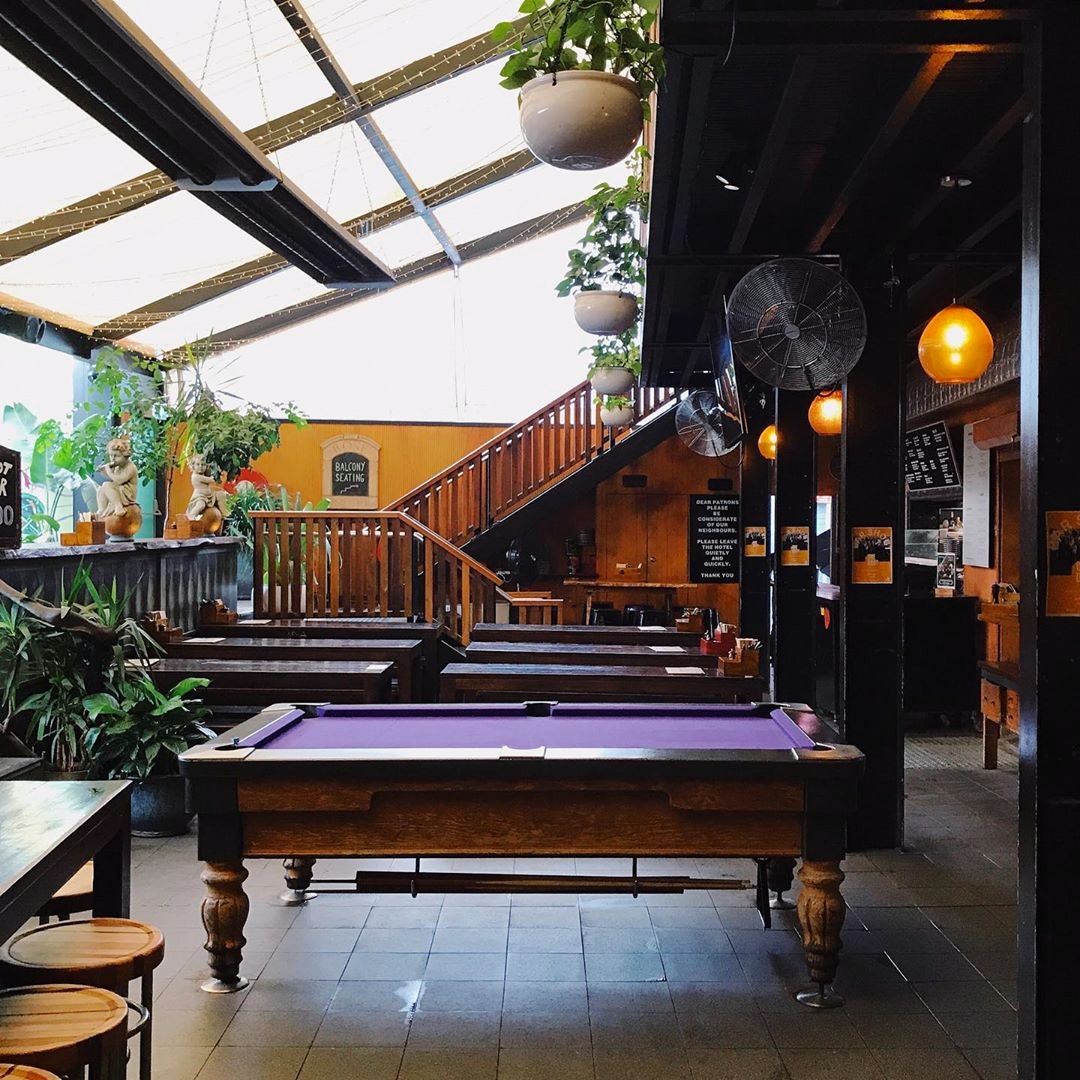 The Rose Hotel in Chippendale is definitely one of Sydney's most charming beer gardens. Positioned in the leafy alleyways between Sydney University and UTS, it's a firm favourite with students looking for somewhere to chill out on study breaks. As for the outdoor space itself, it’s decked out in fairy lights, wooden booths, pool tables and an overhead cover, so you can make the most of weekday specials like $10 pizza, rain, hail or shine.

Sun, space for social distancing, and plenty of beer. If that’s not a winning trifecta for a brewery right about now—we don’t know what is. One Drop Brewing Co. opened earlier this year and it is South Sydney's first microbrewery.

At the back of the brewery there’s a colourful beer garden that sees a high rotation of local food trucks churn out some big feeds, and a big ol’ fire pit you can warm up to in the cooler months. You’ll find the likes of Happy As Larry Pizza Truck, Chur Burger, El Taco Loco, Burgerhead and Fire Pop frequenting here a lot. 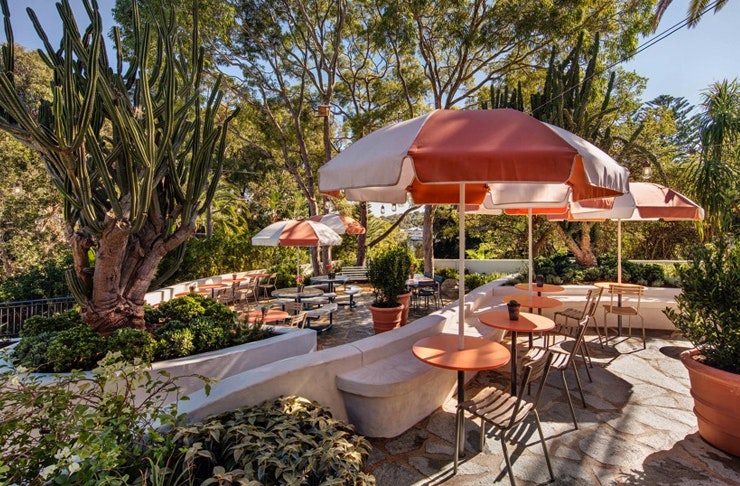 If you prefer your beer garden to have a little more polish, waterviews and even a pop-up outdoor cinema in Summer, The Newport is for you. Located on the shores of Pittwater, this idyllic venue offers both a view and large gathering space for friends and family (and by large we mean they offer a map on the menu) with a mammoth alfresco stretch where you can soak up all the marketplace feels. And to make things even better, The Newport is also dog-friendly. Feeling Fancy? Head upstairs to Bert’s for oysters and champagne.

The jewel of the Terrey Hills Tavern is its Balinese-inspired alfresco beer garden. With water features, an outdoor bar and booth seating, this sprawling spot is dressed in palm trees and lights. As for the food? Go hard on the nachos loaded with sour cream, guacamole, pico de gallo, and house-fried corn chips. And if you’ve got more room, there’s a foot-long smoked brisket hoagie to dig into with grilled onions, dill pickles, cheese, and juicy ranch sauce. 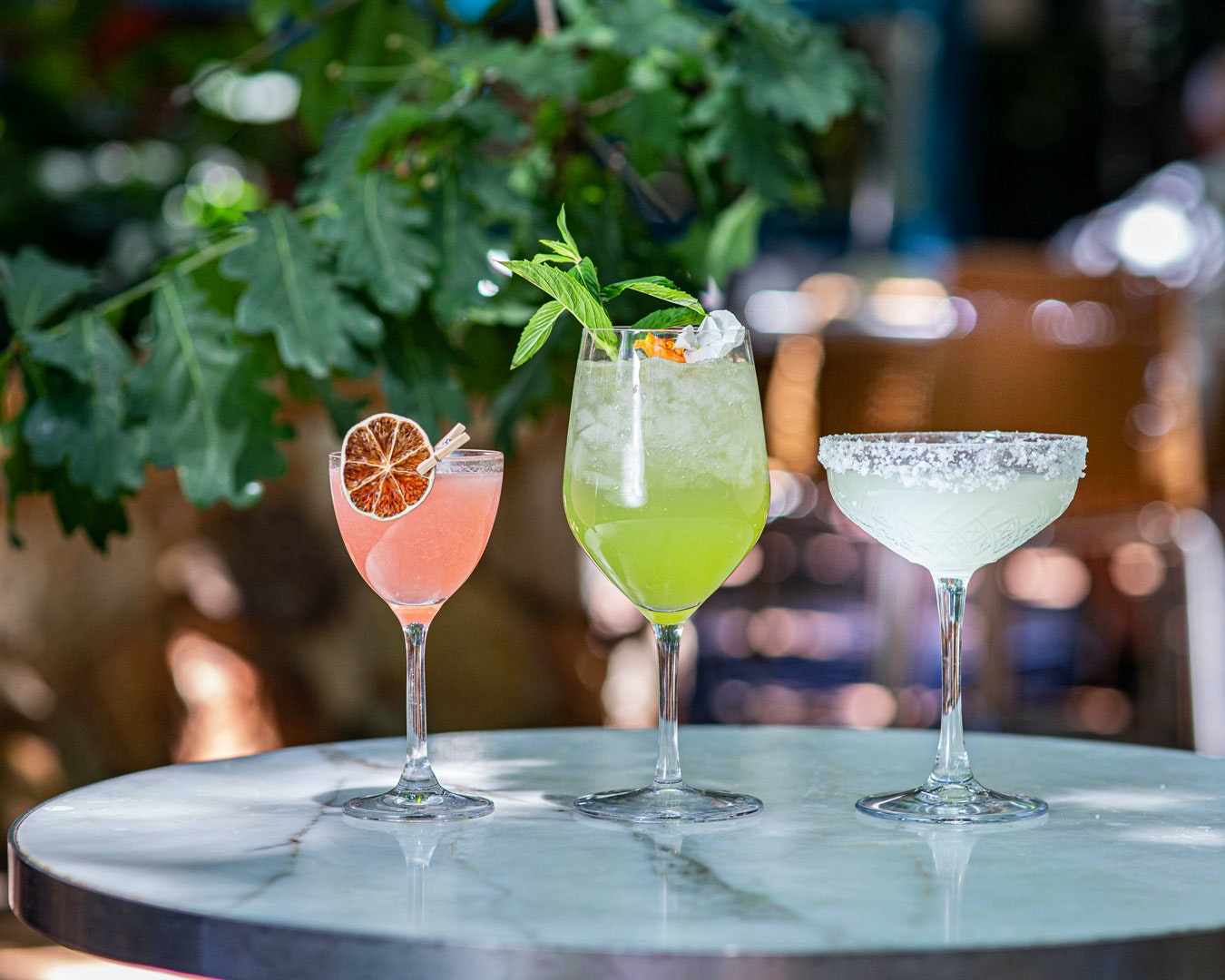 The Oaks is home to one of Sydney's most iconic beer gardens. It's been around for a while, but it is fresh off the back of a thirsty multi-million dollar refurb, and—let's just say—she is a stunner. Home to an 80-year old oak tree wrapped in fairy lights, this leafy alfresco spot is bordered by a garden conservatory restaurant called Alala’s, which is helmed by head chef Julian Nikiel, a former protégé of Mike McEnearney (Kitchen by Mike). If you're into a more low-key vibe, drop into the front sports bar for beer tastings and $20 steak nights, and a massive screen to catch all the games. 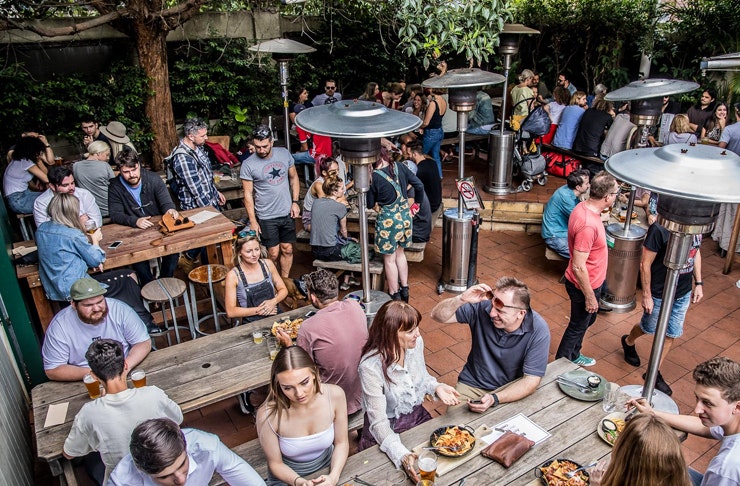 You could call the beer garden at The Courthouse a cornerstone of life in the Inner West. It is where you'll find one of the best beer gardens in Sydney, with a vibe that's more akin to your mate's sprawling backyard patio than a fancy-pants alfresco restaurant. Set yourself up on one of the long benches and settle in for one hell of a Sunday roast every single weekend. Elsewhere on the menu, you've got all your classic pub grub: steaks, chicken parmis, beer-battered fish, and The Courty’s famous beef nachos. And to top it all off, your four-legged mates are 100% welcome—this is Newtown, after all.

Home to craft beer, awesome chats, and legendary vibes, The Erko also prides itself on seriously good smoked meats. Here, your go-to pub feed has to be the smoky and tender lamb ribs doused in a spiced maple glaze, and if you manage to score yourself a seat in the famed beer garden—you’ll be winning tenfold. The taps here feature a variety of old school and new school brews, from your VB and Resch’s all the way to the latest craft brewery releases from local legends like Young Henry’s and Yulli’s Brews. 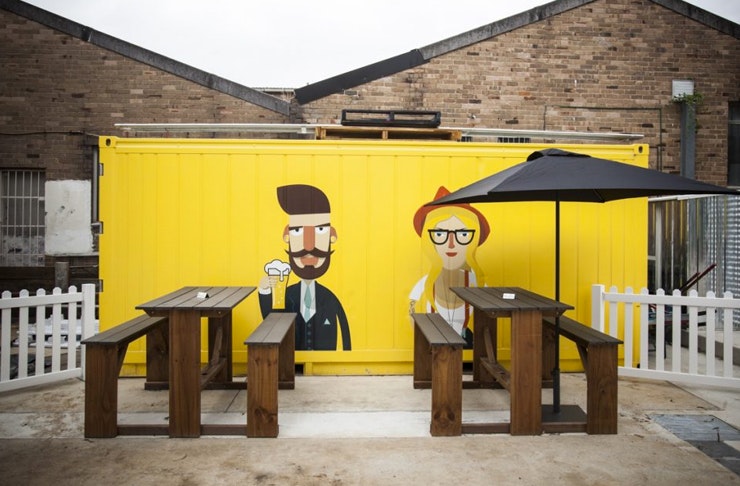 We’re not going to lie, Sauce Brewing’s enormous, sunny, and completely open beer garden is an epic spot to sip a fresh, frothy cold beer and get your tan on (while wearing sunscreen, obviously). This microbrewery creates a solid range of craft beers, so whether you’re a hop-head, sour-freak, or an ale-fan, you’ll be well looked after. Thursday is pizza night and you can also lap up all the food truck vibes every Friday through Sunday. And if you thought things couldn’t get any better, Sauce is also super dog-friendly. 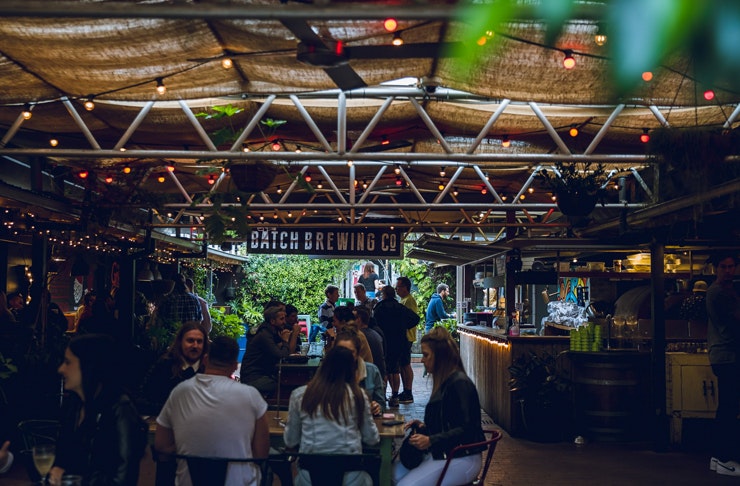 Public House Petersham revamped their beer garden not too long ago, converting it into a modern take on the old classic. Think pot plants, mismatched stools, and local craft beers. With large tables suited for getting the Brady Bunch together, or smaller ones for more intimate catch-ups, PHP serves everyone’s needs. Be sure to try a wood-fired pizza as you sip on your lager and take in the ambience. Plus, there’s a pinball machine you need to get around. 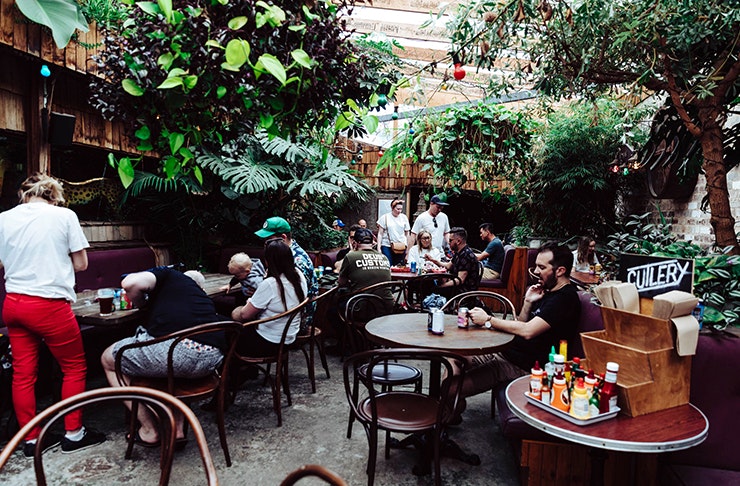 The Oxford Tavern sports a line-up of locally owned and independent brews, live music sessions, a festival dedicated to pickles, an ongoing rotation of epic events and yep, you guessed it, an insane beer garden. On the weekends, this courtyard beauty throws a Sunday Roast with a BBQ twist from 12pm (until sold out) that's not to be missed. This gem comes with your choice of beef brisket, pork belly or pulled jackfruit, roast potatoes, honey roasted carrots, steamed broccoli, English gravy and a house-baked Yorkshire pudding. 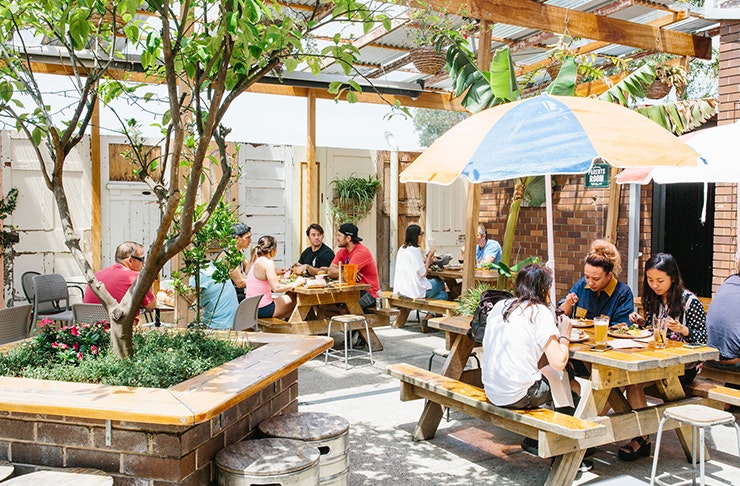 Apart from being one of the very few Sydney pubs that cures, brines, pickles, and ferments in-house, you’ll love The Henson because it unravels into a funky little set-up. The beer garden is peppered over with foliage (the perfect amount so the sun still hits the pavement), festoon lights, striped brollies, and a heap of tin kegs so you can easily set up shop with your mates with half a kilo of chicken wings and a cold one.

Nestled in the cosy Neighbourhood of Sydney’s Inner West, The Balmain Hotel dates all the way back to 1869. The beer garden here boasts a whole lot of tropical plants and the menu oozes Southern US feeds and Asian flavours. What to order? The chilled seafood platter is loaded with fresh prawns, octopus, raw fish, oysters and crab, and if that doesn’t sound like the perfect sunshine feast, we don’t know what does. 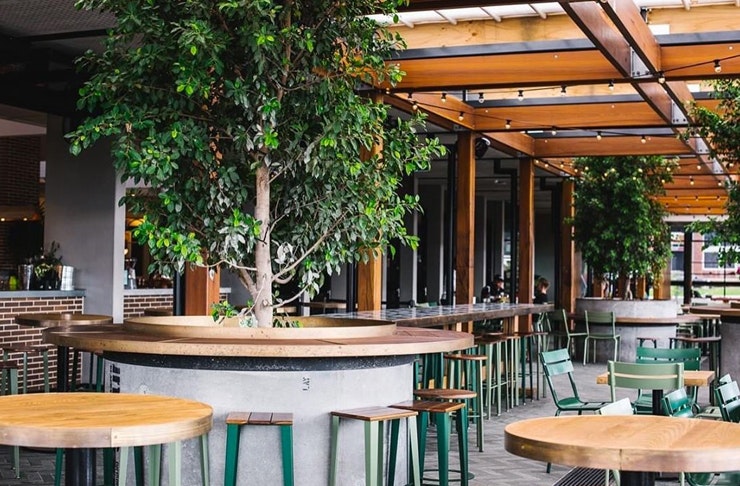 For one of the biggest beer gardens in the Sutherland Shire, look no further than The Prince Hotel. Famous for its ice-cold tap beers and bistro feeds, you’ll want to draw your attention to the braised beef cheeks and prawn spag bowl loaded with chilli, garlic and lemon. This no-frills spot ticks all the boxes.

Hit up Bangor Tavern for a mammoth dog-friendly beer garden that’s bursting with lush greens, bright festoons, street art, a luxe garden bar, and all the live sport. This outdoor stretch is constantly buzzing and sees DJs light the space up every Saturday, and there are $10 espresso martinis from 4pm - 7pm and sneaky $5 house beers from 3pm every day of the week.

Looking for somewhere to catch the footy? Here are Sydney's best sports bars.