Pour That Syrup Like There’s No Tomorrow, These Are The Best Pancakes In Sydney

Pancakes. Isn’t it amazing that someone invented a recipe that makes it possible and socially acceptable to eat cake for breakfast without giving it a second thought?

Known by many names and prepared using many techniques, we’ve cast a wide net and included the best pancakes, hotcakes and crepes (we don’t discriminate) for you to drool over. Whether you’re looking for a vegan version, over the top toppings, savoury French galettes or of-the-moment Japanese soufflé pancakes, we’ve got you covered here with Sydney’s must-try sweet breakfast treats.

These are six of the best spots for pancakes in Sydney. 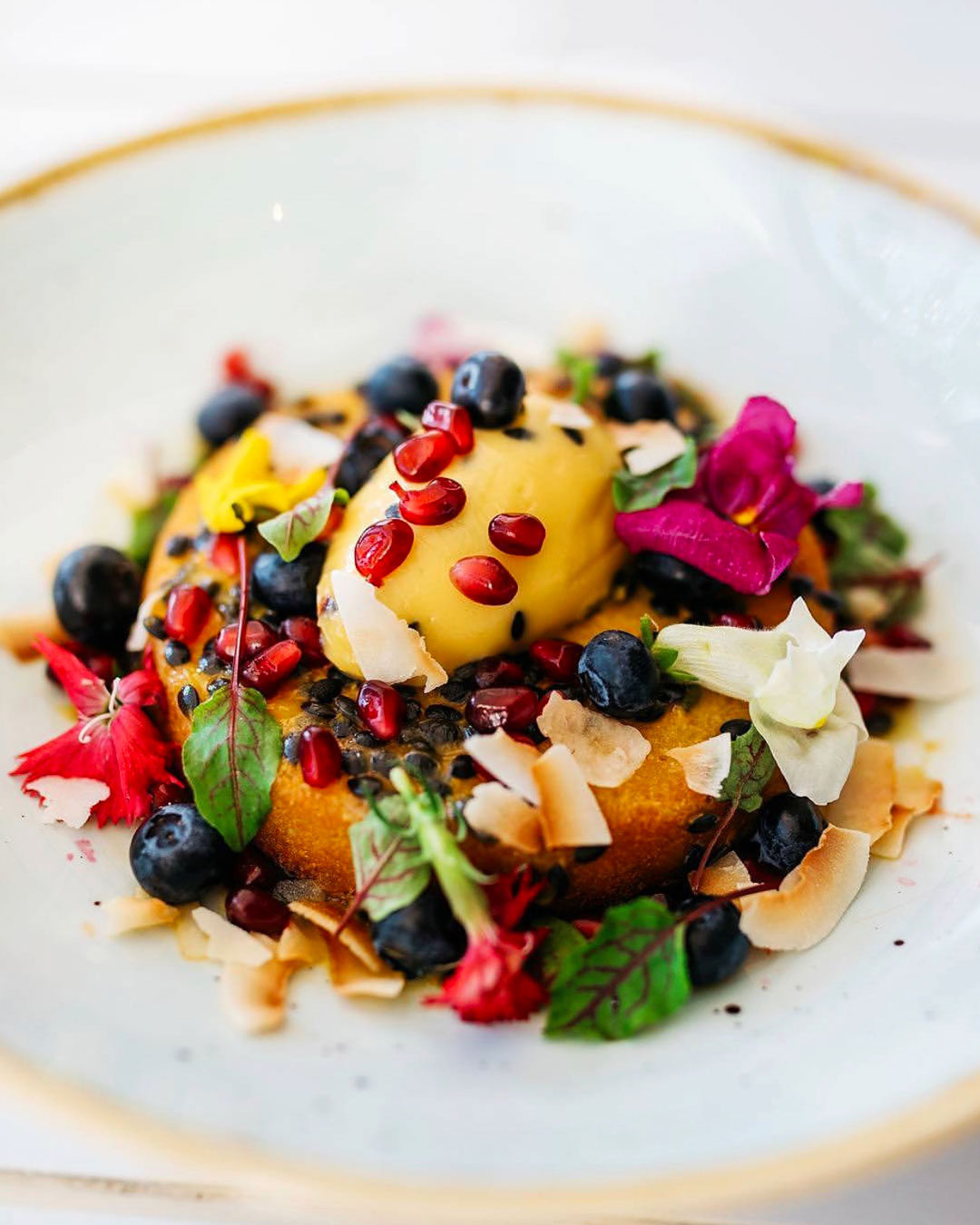 Cronulla’s Blackwood Pantry is a much-loved brunch spot for its relaxed, beachside vibes and its hefty all-day breakfast menu. Here, the oven-baked coconut hotcakes are topped with fresh blueberries, pomegranate, passionfruit curd and sliced coconut. The team loves the flavours and the balance of sweetness and slight acidity from the fruits, making the hotcakes a permanent fixture on their menu.

Head chef and co-owner Robert Lechowicz reveals that the secret to an airy, fluffy pancake is to pass all the dry ingredients through a fine sieve. “If you’re making pancakes at home, make the batter fresh on the day, ensure your ingredients are at room temperature and rest the batter for two hours to ensure the glutens have time to do their thing. Maintaining a consistent temperature when cooking is equally important as altering it during cooking could result in a collapsed pancake.” 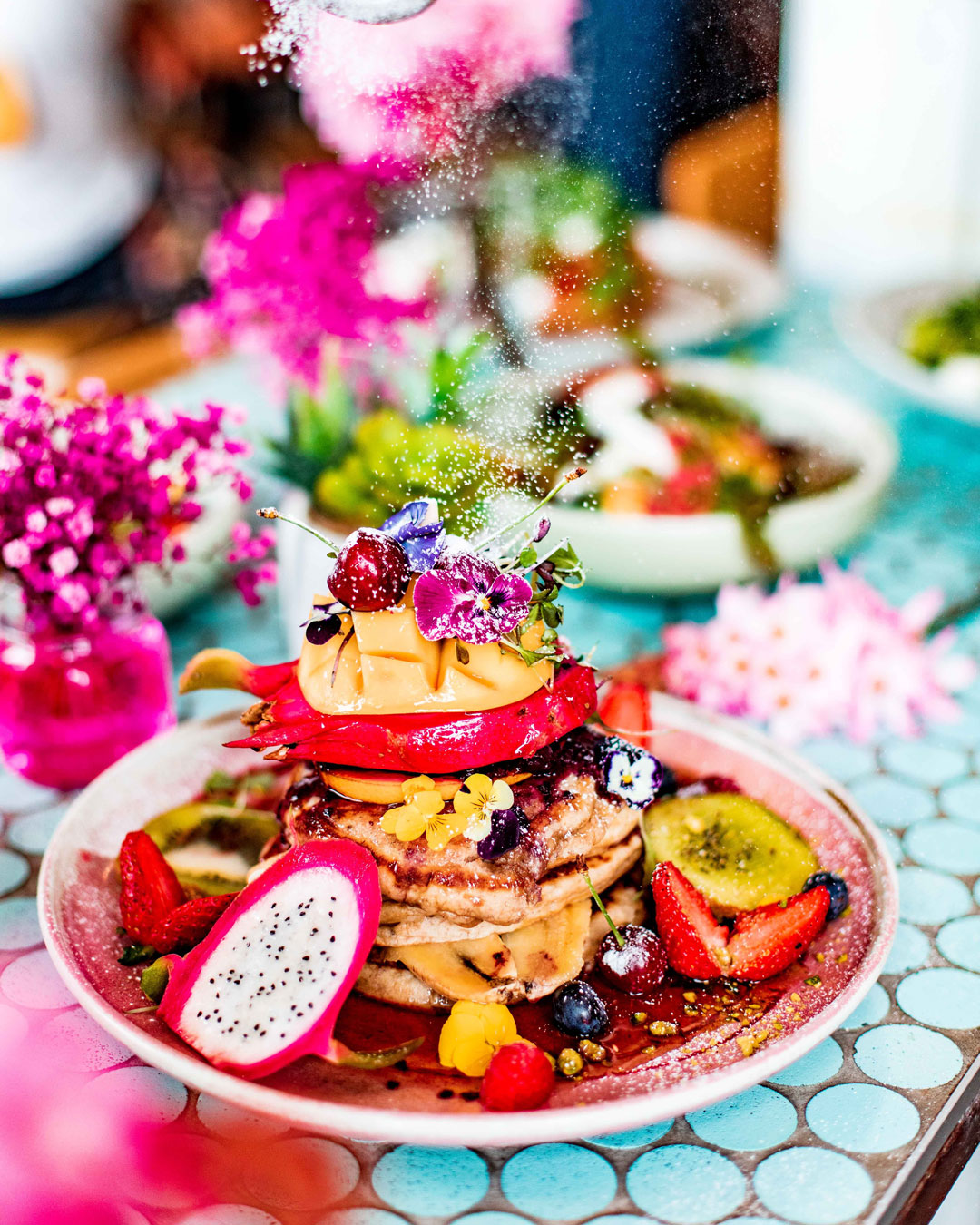 If you’re in it for the ‘Gram as much as the taste (no judgment), Speedos Cafe in Bondi matches its colourful, ‘Gram-worthy pancake plating with breath-taking, hard-to-beat Bondi Beach views.

Speedos caters to all sorts of dietary requirements and the chefs are no strangers to vegan substitutes (the pancakes underwent vigorous recipe testing and were shared with Sydney’s top vegan bloggers before becoming a permanent fixture on the menu). And so, their vegan chia pancakes topped with sticky, caramelised banana, fresh figs, seasonal berries and pistachio crumble and drenched in maple syrup are a must-try.

Speedos says the secret to the incredible pancakes is making sure that every stack leaving the kitchen is a show-stopper. When we asked owner Suzy Dan if she had some tips for making awesome pancakes at home, she said “Don’t! Who wants to clean up?”. We have to agree. 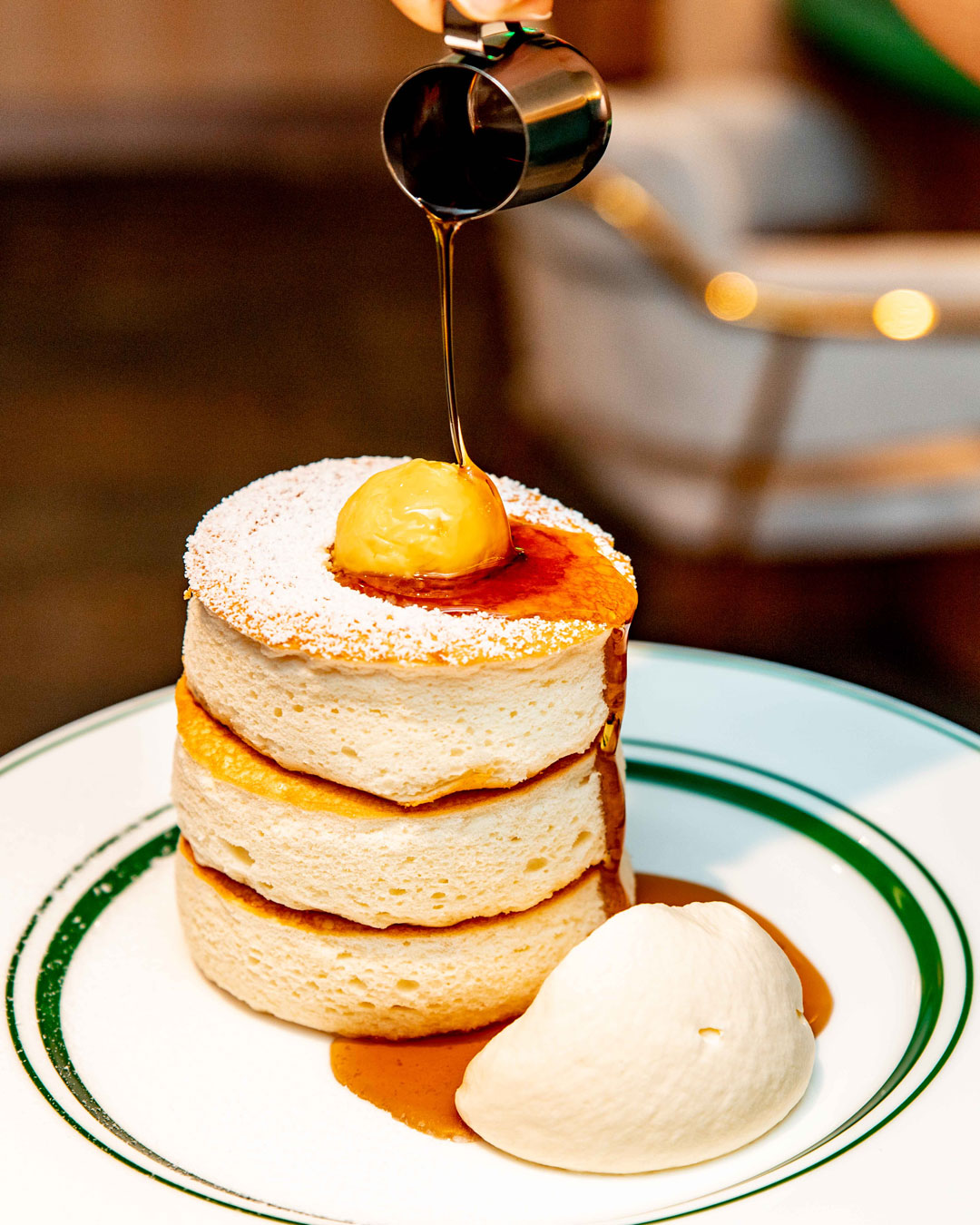 Credited with creating some of the best soufflé stacks in Tokyo, Gram opened in Sydney last year.

Gram's fluffy, cloud-like signature “premium pancakes” are made using an intricate and complex technique, carried out by practiced hands. The entire kitchen team went to Japan for vigorous 10-day training, followed by another 10 days of perfecting their skills at the Chatswood store.

The characteristic jiggle of a Gram pancake is created by whipping egg whites into a meringue-like consistency, that is gently folded into the batter. Once combined, they are steamed in small batches under metal domes, then popped onto a hot pan till golden. The menu warns diners that they face a 40-minute wait for their coveted stack of fresh pancakes, but if you ask us—the wait is totally worthwhile.

At Gram, there are eight different pancake flavours to choose from. Go simple with classic pancakes topped with berries, the more luxurious route with sweet, mascarpone filled Tiramisu pancakes, earthy matcha pancakes, or one of the many seasonal varieties the menu offers.

Gram’s secret ingredient? Culinary confidence, of course. “The secret behind making soufflé pancakes is not to be anxious,” Gram CEO, Scarlett Zhao tells us. “Steam the pancakes low and slow over the lowest flame. If the flame is high, the outside layer will overcook but the inside will be under”. 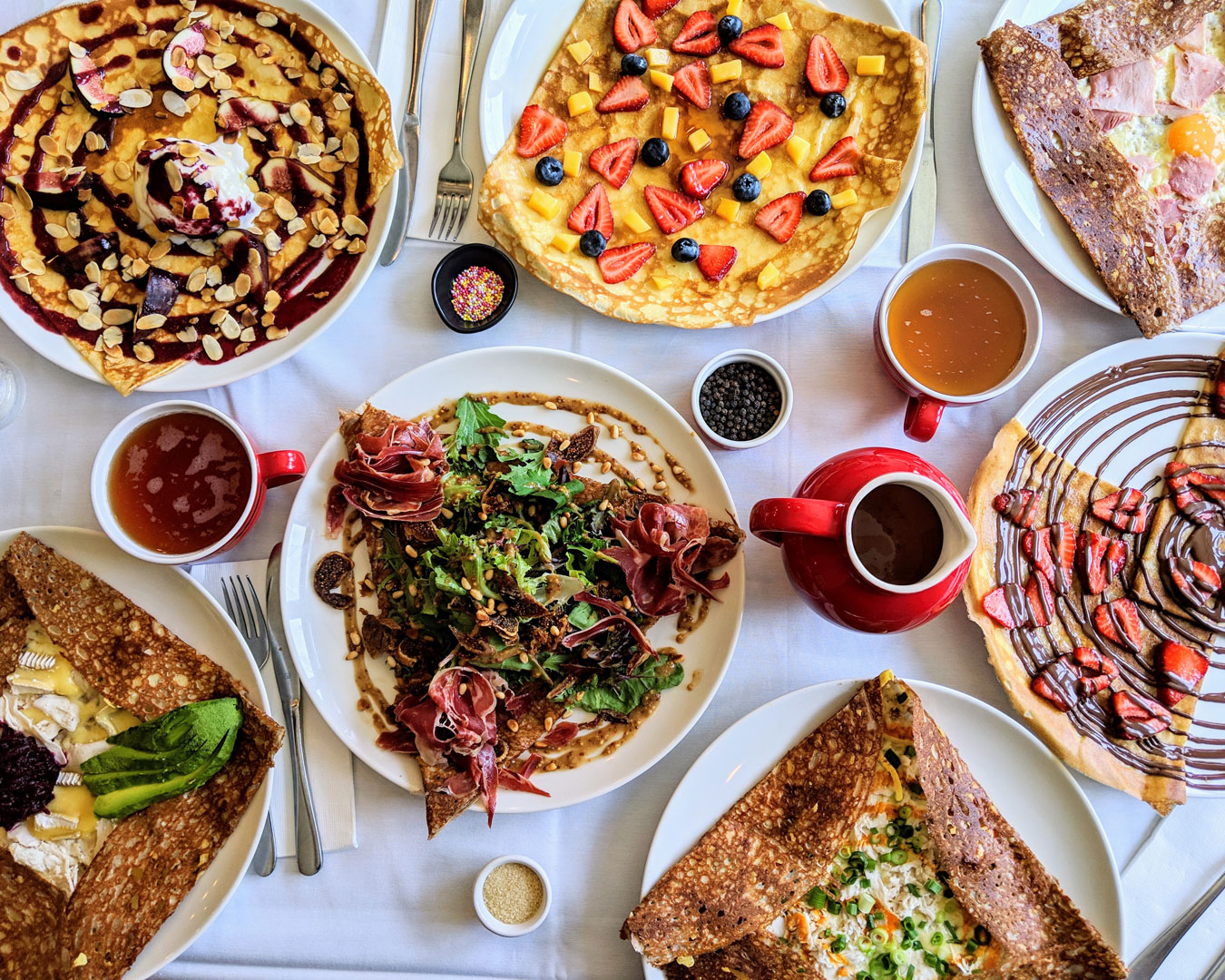 It’s no secret that the French are pancake pros. Four Frogs is an ode to the traditional French crepes, hailing from beautiful Bretagne in the Western part of France. Founded by four Frenchmen who fell in love with Sydney but missed the pancakes of their homeland, Four Frogs uses recipes passed down by the founders’ grandmothers and it’s one of the only spots in Sydney that you can sample authentic Bretagne-style buckwheat crepes, otherwise known as galettes.

Four Frogs menu boasts of over forty varieties, and both the sweet crepes and savoury galettes are made to order, served fresh and delicious. The fillings change seasonally, for instance, you can expect warm galettes filled with Raclette cheese in the winter, and salad style galettes with fresh figs, goats cheese and locally made prosciutto in the warmer months. Finish your meal with bit of sweet indulgence, keeping it simple with popular Nutella strawberry, or homemade salted caramel crepes.

If you’re looking at mastering crepes at home, Four Frogs has you covered. They sell DIY crepe kits you can make at home, complete with their delicious sauces. Pro tip? Put some butter in the pan and make the crepes as thin as possible for the best results. 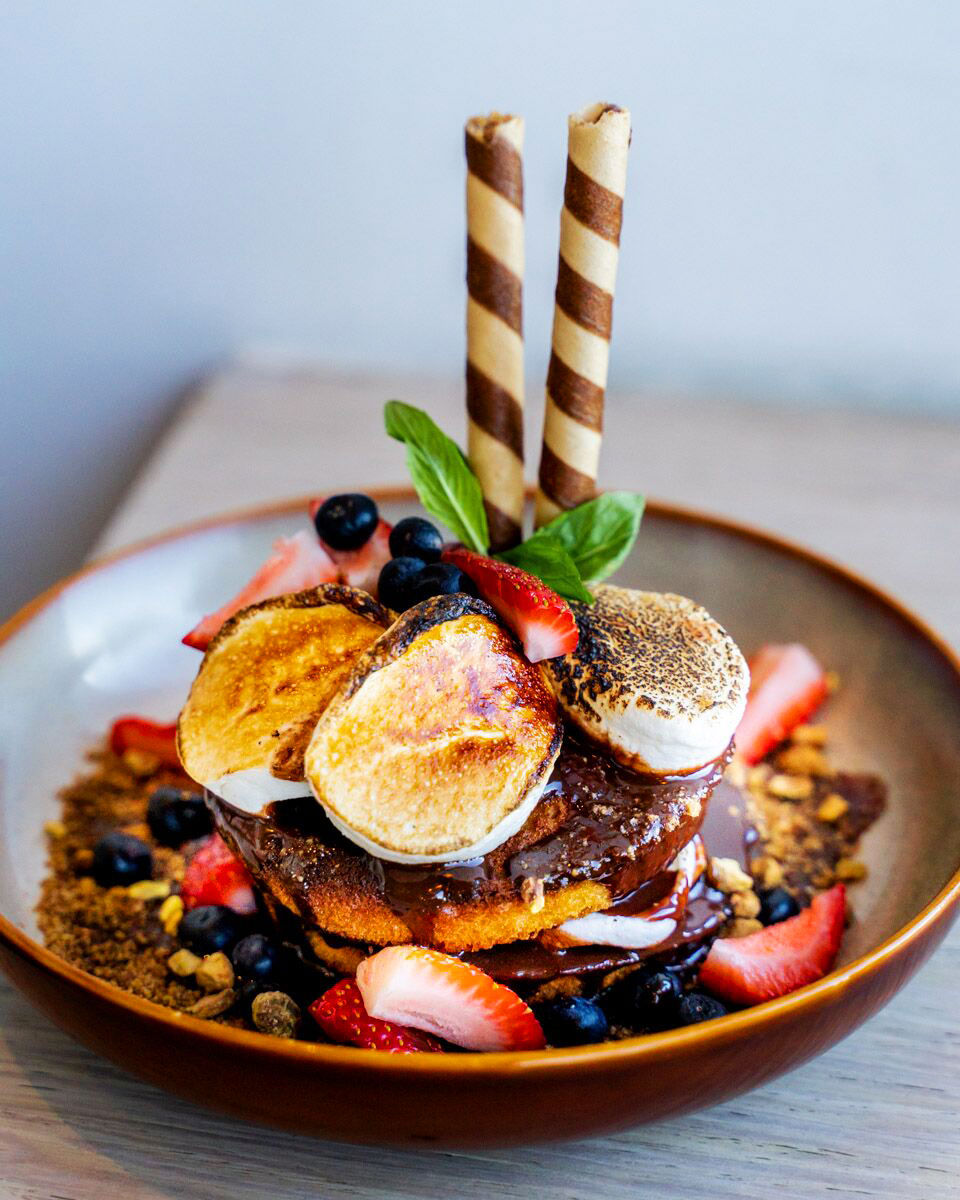 This cosy cafe, tucked into an alcove by the river in Rhodes, is known for its inventive, seasonal hotcakes and fun toppings. The winter hotcake for 2020 is a warming combination of sweet potato hotcakes with gluhwein glaze, seasonal fruits, honey yoghurt, topped with pistachio and hazelnut crumble.

With many hotcakes tried and tested over the years, owner Matthew Abi-Arrage says 2018’s pavlova hotcakes, dropped on Australia Day, have been a hard style to match. “We launched them for a bit of fun and Sunrise on Channel 7 got a hold of them and aired it that morning. We didn’t know until later in the day but we sold a lot of hotcakes. They have returned to the menu most summers since then.”

For Left of Field, the secret to this fluffy breakfast treat is the use of fresh eggs, good quality self-raising flour and the actual finesse behind the process, which includes weighing the ingredients, sampling and taste testing each batch to ensure consistency and amazing quality. Their pro tips for making awesome pancakes include a good non-stick pan, a lump-free but not overworked batter, and allowing the batter to rest for at least 30 minutes, letting the gluten do its thing for more height and stability. 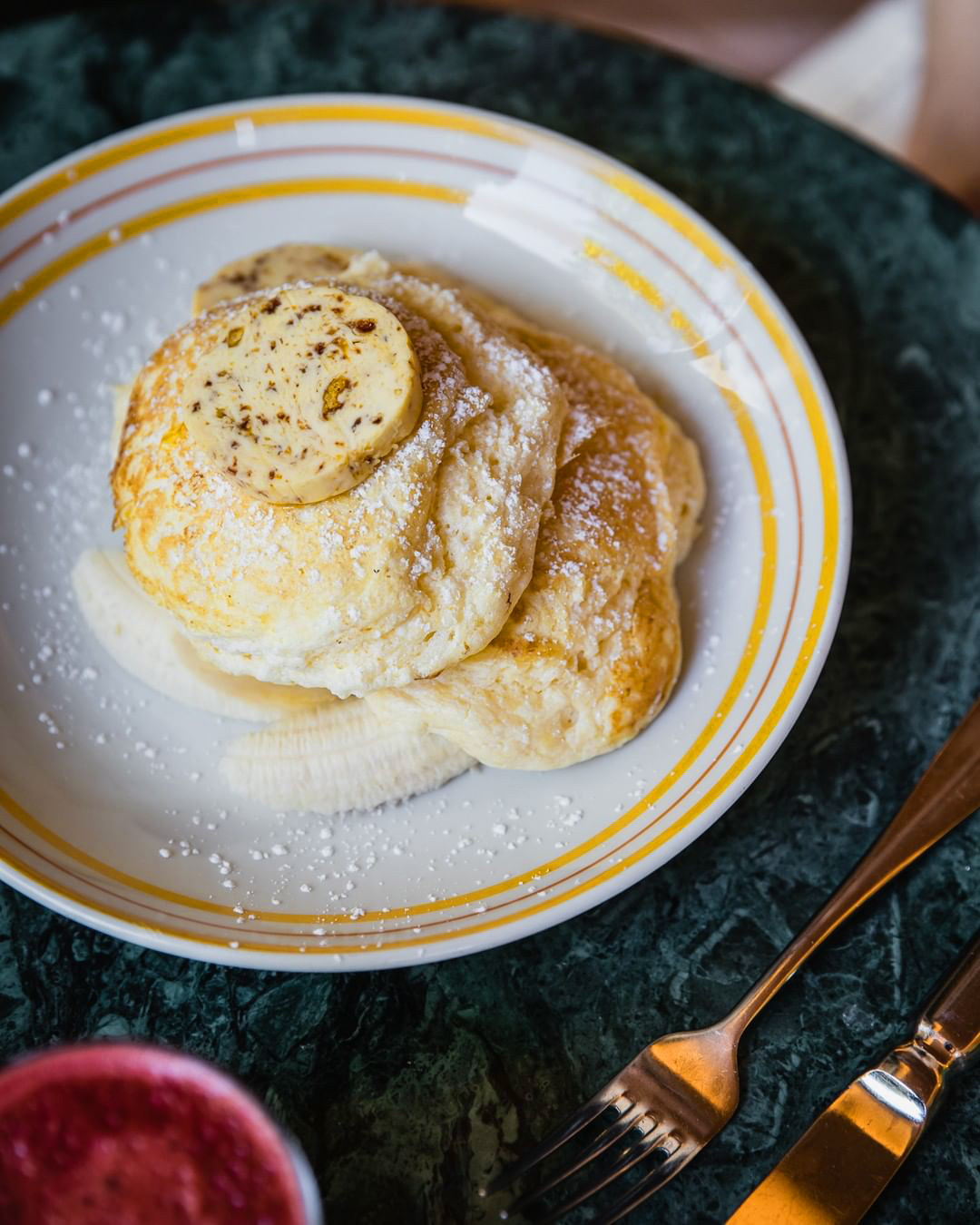 This list simply wouldn’t be complete without including Bill Granger’s iconic ricotta hotcakes with honeycomb butter. A staple on the Sydney brunch scene, from the chef that pretty much invented brunch in Sydney, these ricotta hotcakes are a cornerstone of the menu at bills.

One of the most popular items and a permanent fixture on the all-day breakfast menu, these classic hotcakes aren't as dressed up as the Instagram-friendly pancakes making the rounds at most Sydney cafes these days, but they're still rich, fluffy and ultimately delicious, combining fresh banana, a slab of honeycomb butter and a drizzle of maple syrup. Dusted with powdered sugar and served warm, if you’re looking to satisfy mid-work or lazy Sunday pancake cravings, bills is definitely the place to do it, and you can hardly call yourself a Sydneysider until you have.

Need more brunch ideas? Here are some more of our favourite brunch spots in Sydney.