11 Of The Best Greek Restaurants In Brisbane

A great Greek philosopher once said, ‘Day by day, what you choose, what you think and what you do is who you become.’ I’m 99% sure that means I’m doomed to morph into a slab of baklava one day, and I’ve made my peace with it.

Like the scholars of ancient Greece, we’ve pored through menus to bring you the best Greek restaurants in Brisbane.

After winning hearts on the GC, the younger James Street sibling was like a siren’s song to Brisbane foodies. Within the Calile Hotel, Hellenika boasts its own signature Greek restaurant (a must for those baked lamb and moussaka cravings) and a smaller, bites-focused pool menu. We’re not really sure where evolution is meant to go from here.

Have you reaaaally lived in Brisbane until you’ve stumbled into Little Greek Taverna for yiros at an ungodly hour? This Brisbane Greek restaurant is famous for its prompt annihilation of our hangriest days. Hot tip: enter with your belly rumbling, and expect to leave in twenty minutes with a serious case of the I-need-to-lie-downs.

Prep your belt buckle for a feast bigger than the Parthenon: Ouzeri’s portions would make any yiayia proud. When it’s down to the best Brisbane Greek food, this West End taverna doesn’t hold any punches–we’d double up on the mezze platters, stuffed eggplant and spiced lamb cutlets. 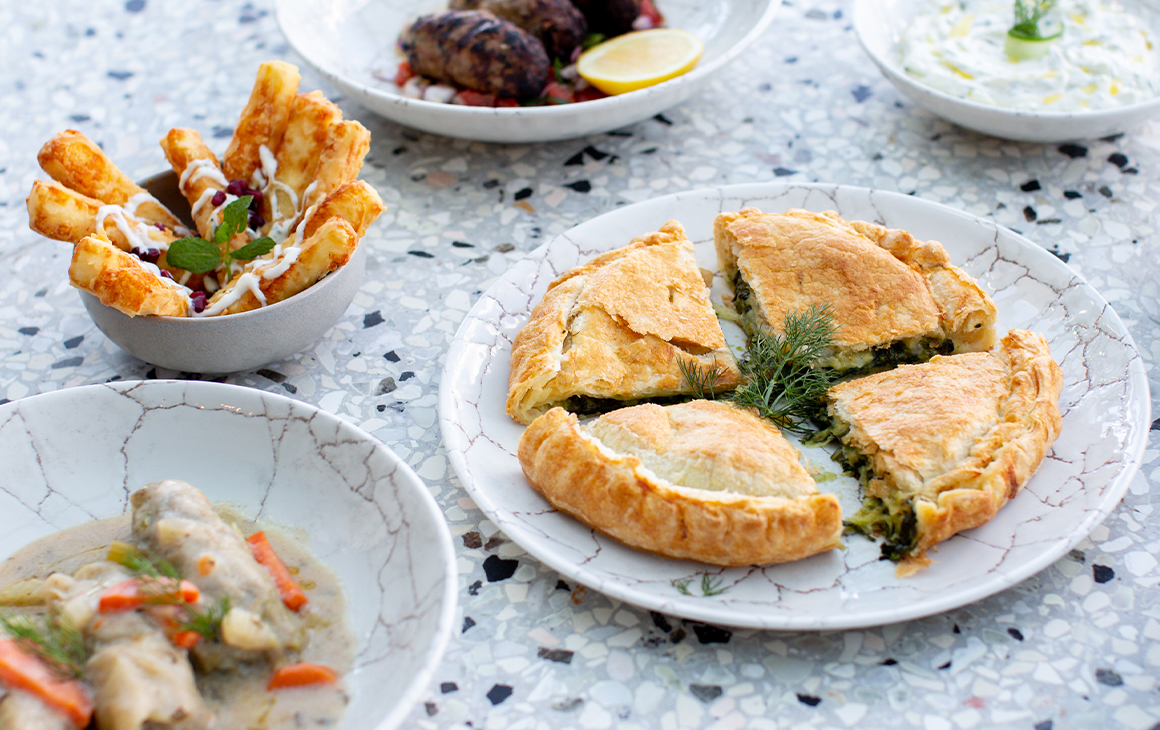 From the mouth-watering food to the dreamy interiors, Opa will have you picking your jaw up from the floor from the moment you first step foot in the venue. The arched windows, cosy white booths, and stunning river views will have you feeling like a Greek god as you wine and dine on their amazing selection of Greek delights. Indulge in pillowy pita bread and tzatziki dip, grilled octopus, fresh oysters, cheesy grilled saganaki and so much more goodness—you’ll want to order one (or five) of everything.

Since throwing open their doors in 1975, South Brisbane’s Greek Club has been winning hearts (and hunger) as a Brisbane Greek food icon. Now, following a serious facelift in 2018, this Greek legend is better than ever. If you’re ticking off your Brisbane Greek food, Nostimo’s pork belly baklava, spicy-sweet BBQ octopus, and halloumi chips in honey truffle are non-negotiable.

Despite what Sam Kekovich wheedles every January, Australia is not the OG maestro of lamb (sorry, not sorry). From its early days as a surfer-fave on the GC, The Lamb Shop now stands proudly on the foodie strip of King Street. Swing by for Brisbane Greek food entries like fall-to-pieces lamb shoulder, handcut chips topped in crumbling feta, and souvas too sweet to share.

West End, you beast. With another entry to the must-do list of Brisbane Greek restaurants, here’s a warning, other ‘burbs: pick up your game. The team at Lefkas won’t steer you wrong, so settle in for an evening of char-grilled mussels, boards of dips to share, and entirely too many felafels. If such a thing exists.

As Plato once said, ‘When in doubt, order more dolmades.’ (Alright, it was us, but we stand by it.) Parked in the leafy streets of Graceville, Kafe Meze is a sneaky standout in the Brisbane Greek restaurant game. From mezze platters through to end-of-the-night baklava, this little number will have you hooked to the end. 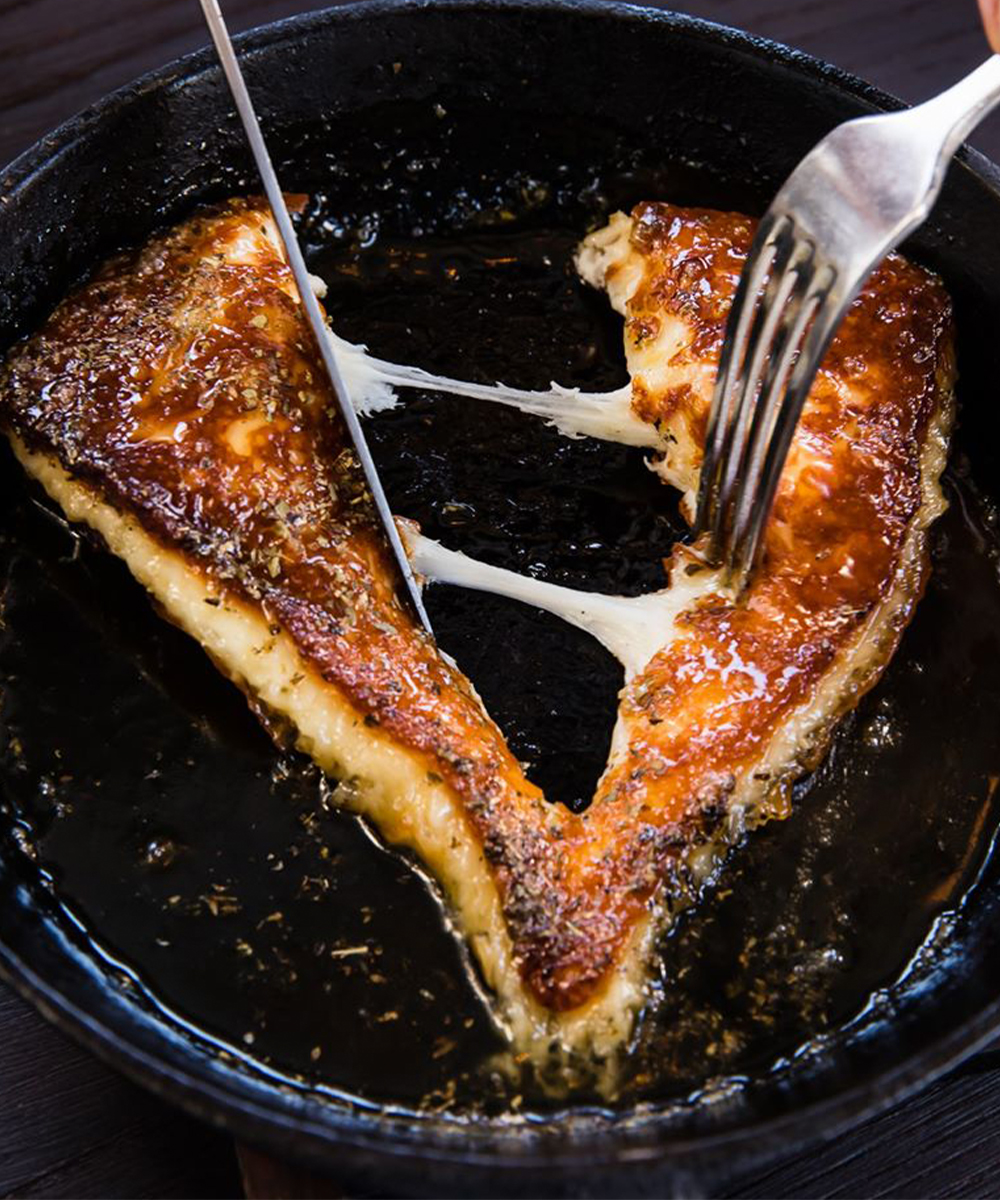 Settle those Big Fat Greek Cravings with a day trip down to Howard Smith Wharves. Here, under the Storey Bridge, you’ll find Greca, a haven of Mediterranean delights—and, no-holds-barred, one of Brisbane’s best Greek restaurants. Let the ouzo flow freely and brace the table for plates toppling with saganaki (that's cheese fried in honey for the newbs), octopus topped in green chilli, and fresh seafood by the river.

When the belly’s rumbling like rolling thunder, follow the crowds to Zeus Street Greek. In the CBD, South Bank and Chermside, these minions of the thunder god are fixing Greek food cravings with pitas stuffed with tender chicken and tzatziki, crispy halloumi chips and their famous Spartan Box.

Problem: you’ve hit Code Red (that means hangry AF) with a Tier 3 halloumi craving. Solution? The Yiros Shop. With spots in South Bank, the Valley, and a few in the ‘burbs, this team fronts the perfect Greek food fix for those half-hour windows.

Had enough of Greek restaurants around Brisbane and want to switch to a different international flavour? Find our fave Japanese eateries here.