The Best Vegan Cafes In Brisbane

Whether you are vegan for the health benefits, environmental reasons, or are just in it for the street cred, any vegan worth their tofu will have a mental list of great Brisbane vegan cafes near them at any given time.

We are here to help assemble said list, starting with Brisbane's best vegan cafes—where else? If the meat eaters and plant based can agree on anything it’s that you can’t go past great coffee and quality smashed avo, so without further ado here are the top vegan cafes in Brisbane that everyone can enjoy.

Head to the North side to experience Brisbane’s first ever entirely vegan café, Veganyumm. If you thought going vegan meant you could no longer indulge, think again. Veganyumm sells all sorts of amazing treats, including magnificent cakes that are 100% Pinterest worthy. A trip to Veganyumm will have you walking away with a new perspective on vegan baking and your Instagram line up for the next month.

Ok, so this one isn’t exactly a café, but we couldn’t do this list without giving it a well earned shout out! Visit MooFree Burgers Northlakes for the best burger you’ve had in years, regardless of the fact that they are all vegan. MooFree are all about making 100% vegan burgers and fries taste delicious, proving that ‘vegan’ isn’t a synonym for ‘bland’, contrary to many meat eater’s beliefs. They even have their own homemade vegan ‘cheeze’ sauce, perfect for ‘cheezey fries’ and just as carb-loadingly-mouth-watering as your usual cheese fries, just minus the baby cow food.

A couple of stores down from Veganyumm in Everton Park is Charlie’s Raw Squeeze, and they are giving them a run for their money! Charlie’s serves only wholesome, plant based food, getting the freshest supplies from their adjoining fruit and veg market. They have raw treats, organic coffee, and plenty of gluten free options, making sure there is something for everyone.

Satori Organics Wholefoods Café specializes in, you guessed it, organic wholefoods! Their menu offers up a plethora of vegetarian and gluten free dishes, as well as providing gluten and sugar free options. Stop by for a cold pressed juice or coffee and one of their awesome vegan dishes from their seasonal menu, including a vegan jaffle, coconut bowl, and the legendary fave, Rustic Avo made with Crust & Co sourdough, pesto, shallots, and tomato.

This all vegan café in Windsor is known for its delicious vegan milkshakes and sweet treats. Sharing its domain with a grocery, The Green Edge has Brisbane’s best access to everything green and wholesome, and the local goodness of the ingredients comes out in the flavour of the food. Grab a vegan juice and burger next time you’re in Windsor, The Green Edge is definitely worth the trip. 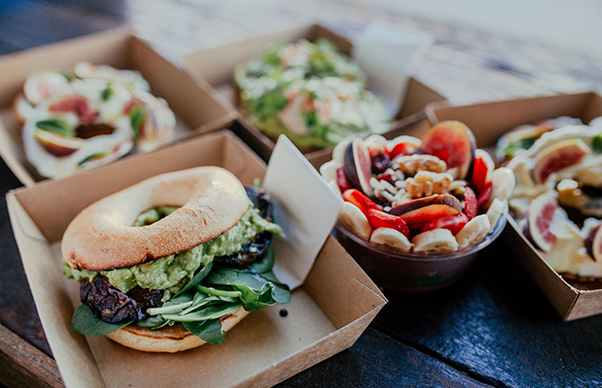 If you are looking for organic wholefoods you can’t go past Paddington’s Fundies. Serving up plenty of vegan options such as salads, juices, and burgers, Fundies also doubles as a wholefoods market, selling all you need in nutritious, plant based options for your next grocery trip.

Mount Gravatt’s vegan restaurant Loving Hut prides itself on being 100% vegan, cooking with only the most wholesome of plant based ingredients. Their philosophy ensures that all the food they serve is clean and safe, green and kind, and above all healthy, ensuring that you walk away feeling satisfied, nourished, and just a little better about positively contributing to our planet’s wellbeing.

Are you longing for a vegan bakery that doesn’t shy away from the good stuff? Welcome to The Baker’s Arms. Although not entirely vegan, The Baker’s Arms has some great vegan options for those that live the plant based lifestyle, and they offer up faves such as vegan bagels that are hard to find elsewhere in Brisbane.

With a focus on fresh produce & wholesome ingredients, Bowen Arrow Café naturally has a range of vegan options that are to die for. Make sure you try one of their sweet vegan bagels and keep an eye on their seasonal specials!

If you are a vegan Brisbanite who hasn’t been to Vege Rama yet, stop what you’re doing and head to the CBD. This café serves up more than your average avo on toast and fresh squeezed juices, adding burgers, curries, salads, cakes, and plenty more home cooked faves from both east and western cuisines, all of which is spectacularly vegan.