13 Of The Best Restaurants In Barangaroo Right Now

Barangaroo has had quite a transformation over the last few years. Once a busy shipping terminal, it's now one of the most exciting restaurant precincts in Sydney, complete with awe-inspiring city architecture and pretty waterfront views—perfect for watching the sunset thanks to its west-facing aspect. After what felt like endless years of construction, the Barangaroo waterfront area on the edge of the CBD is these days looking pretty bloody schmick, with Crown Sydney, now officially the city's tallest building, as its shining centrepiece.

As well as those million-dollar harbour views, which you can soak in as you take the Wulugul Walk across the foreshore, Barangaroo is also home to award-winning, world-renowned chefs and culinary brands from Aussie heavyweights. Like Ross and Sunny Lusted (Woodcut, The Bridge Room), Alessandro Pavoni (Ormeggio at The Spit), the globally beloved Nobu, and three Michelin Star chef, Clare Smyth. Italian, seafood, Japanese omakase, Turkish, fried chicken, contemporary Chinese—there's a restaurant for any appetite in Barangaroo.

Here are 13 of the best restaurants in Barangaroo right now. 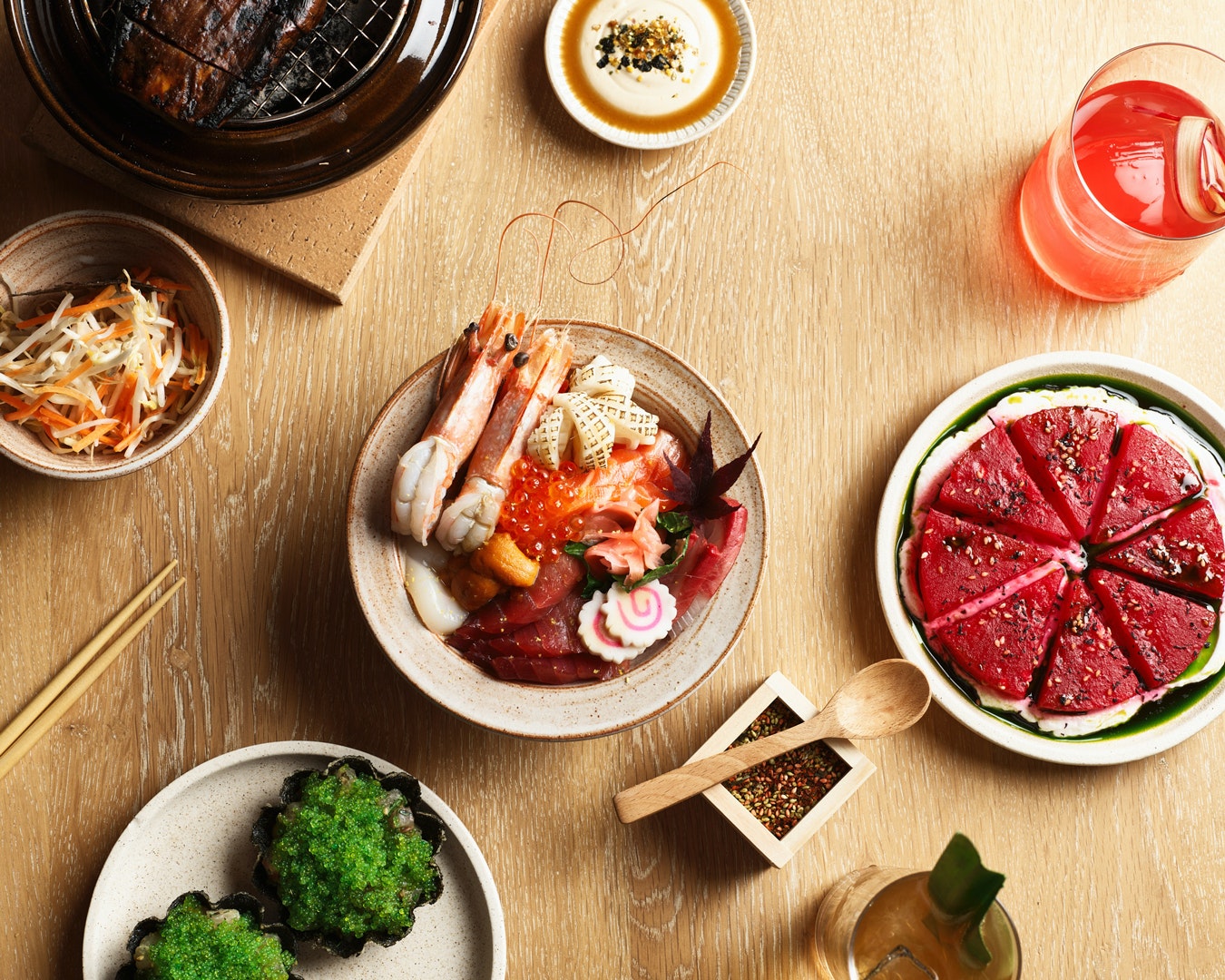 Picking up where Bea left off in the iconic noodle bowl-shaped Barangaroo House building, Rekōdo is a restaurant and vinyl bar inspired by Japanese listening rooms. Rekōdo—Japanese for record—is as much a listening experience as it is a spot to sip sake and fill up on fiery red miso sesame eggplant. Paired with a stunning view over Darling Harbour and a wrap-around balcony, this is a vibey spot for a Friday night.

On the sonic front, the venue has been equipped with two Klipsch La Scala AK5 speakers, a McIntosh MC152 amplifier, a McIntosh MP100 Phono Preamp, and a set of McIntosh MT2 turntables. Tunes will switch between live vinyl DJs, Rekōdo's catalogue of vinyl, and guest musical curators—from Donny Benet to Meg Mac and Lazywax. 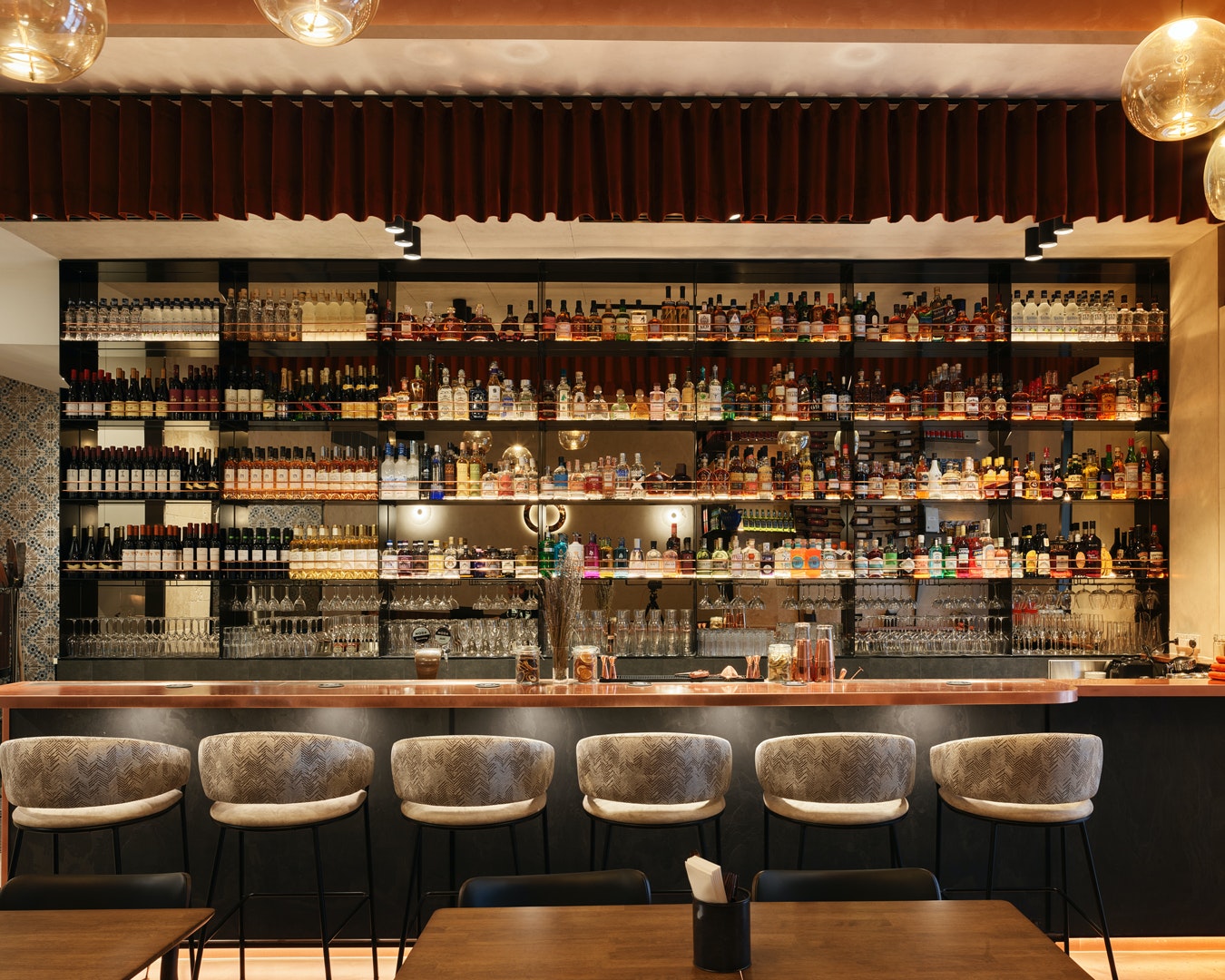 From Somer Sivrioğlu and the team behind Efendy and Anason, Tombik is a sleek 45-seat neighborhood kebab bar where you'll find Istanbul-style street food, including the restaurant's namesake: puffy woodfired tombik bread.

The menu at Tombik has been dreamt up by the group's executive chef Arman Uz, and is inspired by his upbringing in Tarsus in Turkey. Expect house beef rump and lamb belly kebabs, falafel, and biber flatbread with chili and tahini. To drink, it's an edit of Turkish wines and beers and bespoke cocktails, including a spiked shalgam, which is a pickled turnip and chili juice, typically enjoyed with raki and food. 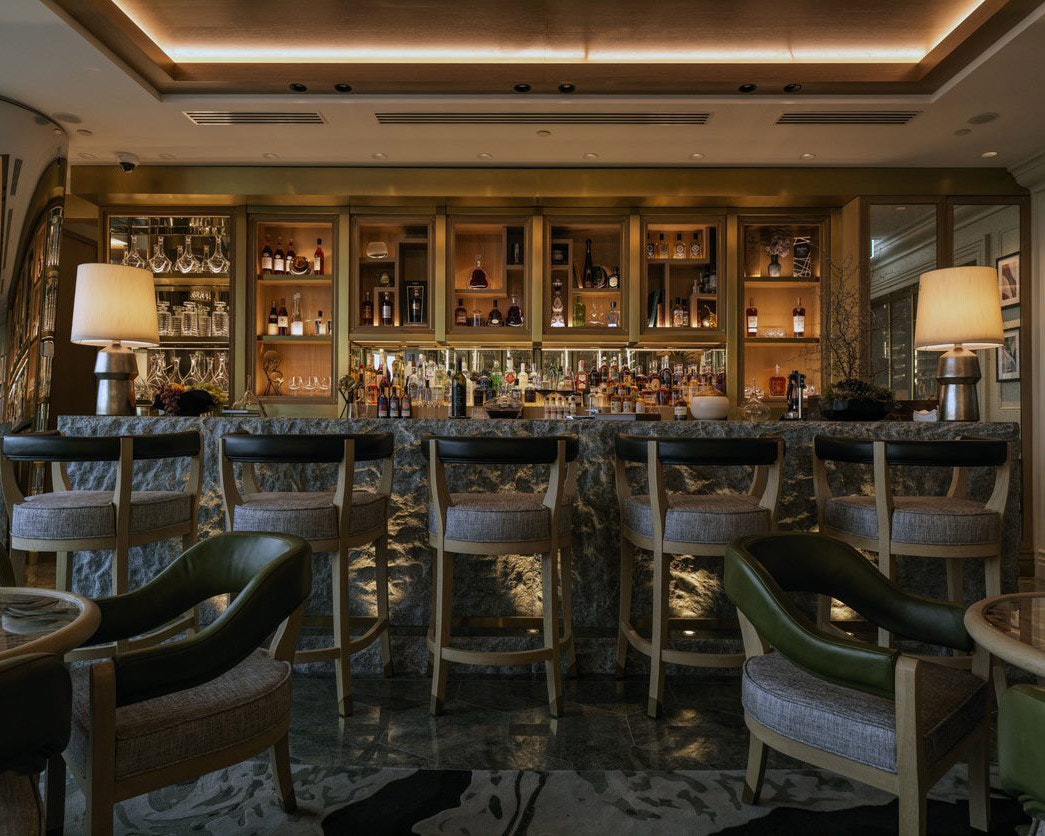 Recently awarded three Michelin stars for her Notting Hill restaurant Core, Clare Smyth is the only British woman to ever gain the prestigious honour—and one of the world's most acclaimed chefs. And now, she's come to Sydney to take over the 26th floor of the sparkly Crown Tower, with its breathtaking views across the city. At Oncore by Clare Smyth, she'll be offering lucky Sydneysiders the gastronomical experience that made her so successful in London—with a couple of Aussie twists. Alongside a 3,000 strong restaurant wine cellar, Smyth will blend her heritage with unique Sydney flavours and sustainable produce drawn from the country's best farmers and producers.

Famous for her dishes that balance the tension between simplicity and sophistication, Smyth's Sydney menu will include the now-famous "Potato and Roe" dish. Imported from Core, it involves a slow-cooked Charlotte potato topped with smoked trout and herring roe, and served with beurre blanc. The Sydney version will feature potatoes produced by fourth-generation family farmers from the Southern Highlands. There'll also be "Beef and Oyster", a plate inspired by the Victorian-era beef, oyster, and Irish stout pie. It'll hero oysters from the Wapengo and Wagonga estuaries from the South Coast of NSW and Shiro Kin Fullblood Wagyu beef sourced from NSW and South East Queensland.

For something extra-special, book a seat at the bar for Oncore's Chef's Table experience. Or, arrive early to enjoy the view and one or two of Oncore's innovative cocktails. 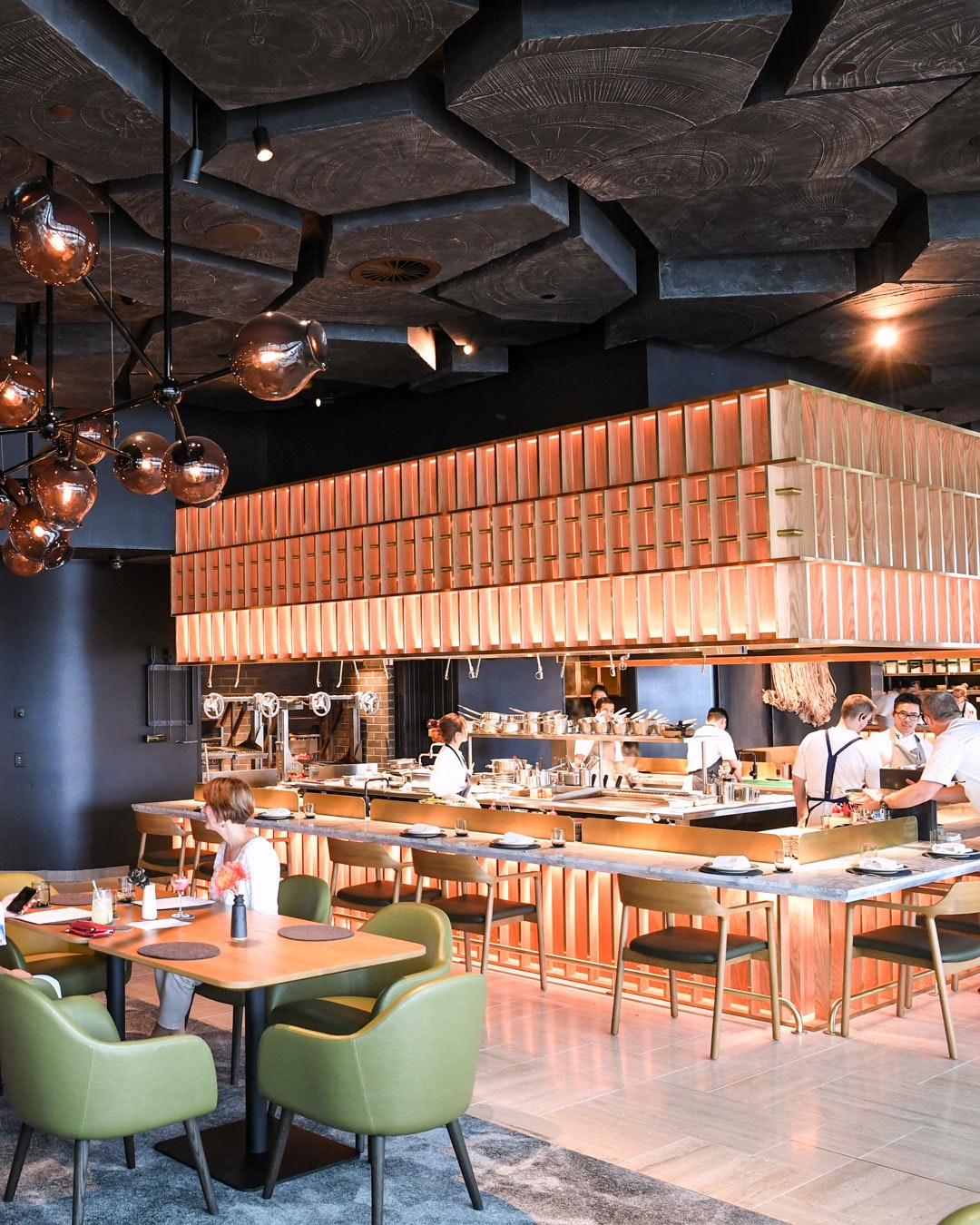 Formerly of the award-winning Sydney fine-dining staple The Bridge Room, culinary power couple Ross and Sunny Lusted opened up their new Barangaroo restaurant in late 2020 to understandably high expectations. To no one's surprise, the husband-and-wife duo delivered in spades with Woodcut—a sprawling venue that opens out onto the water and the Barangaroo promenade. With no back-of-house, the restaurant’s four open kitchens are on full display for diners, especially those seated at the kitchens' up-close dining counters. Rather than a traditional selection split into entrees, mains and desserts, the daily-changed menu is divided by kitchens and cooking methods. Choose dishes from the steam, fire, seafood, or pastry kitchens. Start with wood oven breads like slow ferment sourdough and pipis cooked in steam kettles and move on to southern rock lobster served garlic kombu butter or, from the wood grill, Stone Axe Full Blood 9+ Wagyu sirloin. 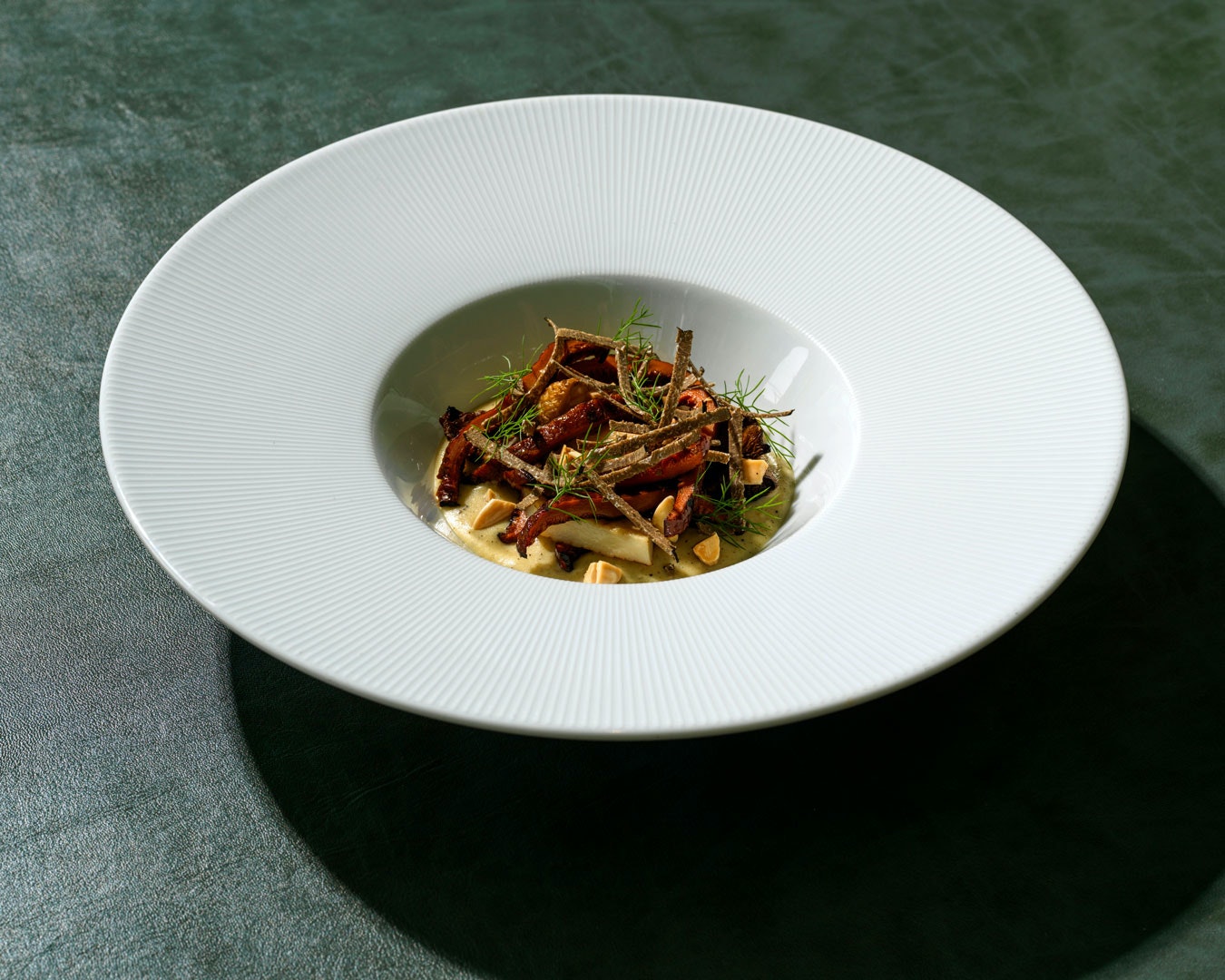 Meaning "by the sea" in Italian, a'Mare swaps the Mediterranean Sea for Darling Harbour water views to give us one of the most sublime Italian dining spots in the precinct. Chef Alessandro Pavoni, who had already wooed Sydney with Ormeggio at the Spit, opened his new restaurant to immediate acclaim for its impeccable service, luxurious interior, and masterful take on the simplicities of Italian food while using the best seasonal Aussie produce. Think whole fish cooked in a Josper charcoal oven, hand-made pasta, wagyu beef carpaccio antipasti, burrata caprese, all accompanied by a barrel-aged Negroni. Throw in some tableside pesto preparation for a touch of showmanship, and you've got yourself an Italian fine dining experience like none other.

Famously opening a restaurant together in 1994, chef Nobu Matsuhisa and actor Robert DeNiro began the Nobu empire in New York City. Since then, Nobu has opened nearly 50 locations across the globe and become one of the most respected names in fine dining. In 2020, Sydney was finally blessed with a location in Barangaroo at Crown Sydney. Now, Sydneysiders can experience the fusion of expertly crafted, traditional Japanese cuisine with local produce and seafood—all from a stunning waterfront setting. Chef Harold Hurtada, who brings 11 years of experience working for the group, still showcases and gives us a taste of Nobu signature dishes like the black cod miso and yellowtail jalapeno. To help you discern, the menu is divided between "Nobu Classic" and "Nobu Now". 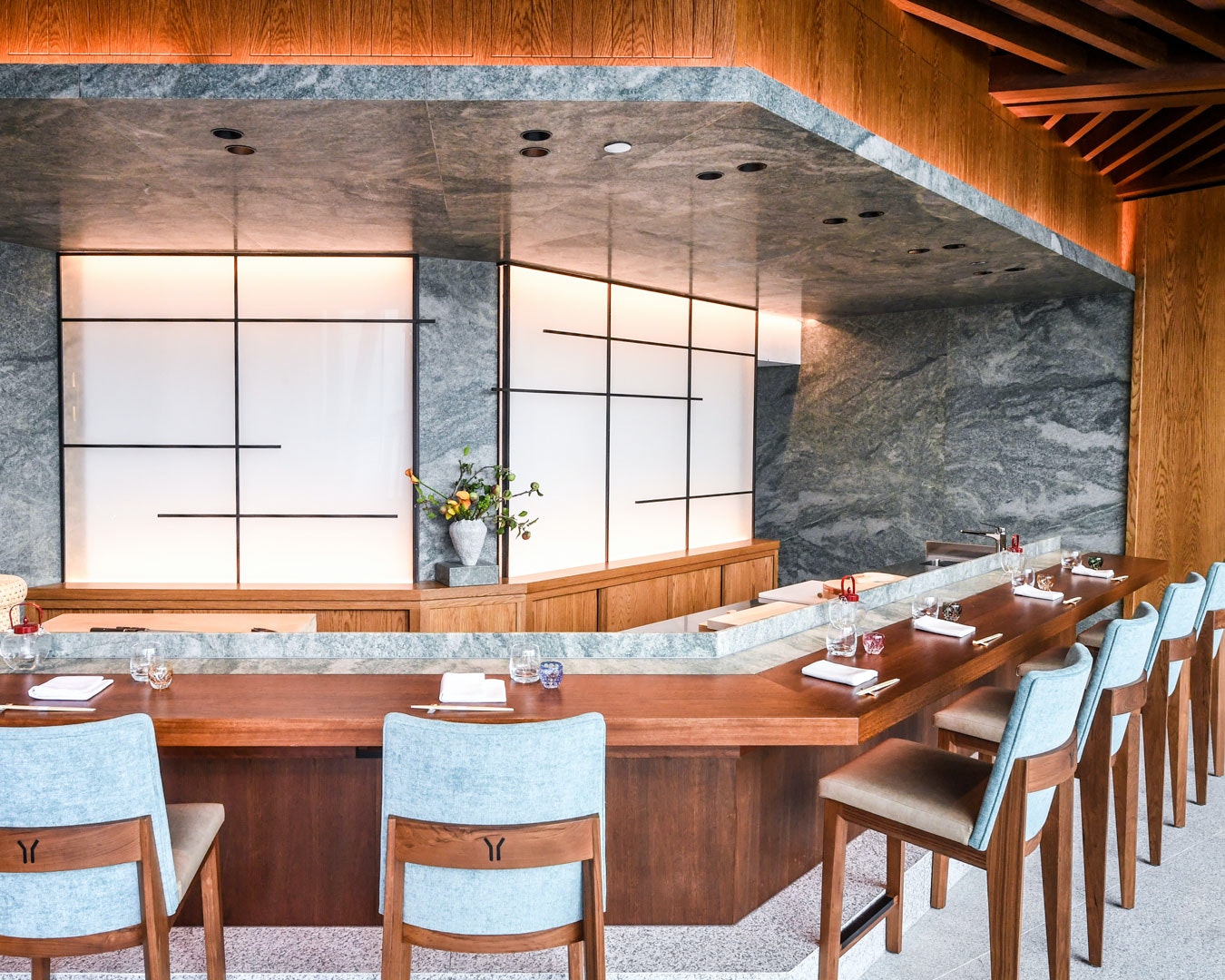 The Japanese word "omakase" roughly translates to "I'll leave it to you", allowing the chef to select an entire menu for their guests, changing almost every day based on seasonal availability. Inside Crown Sydney's Nobu restaurant sits Yoshii's Omakase, one of Sydney's most impressive omakase dining experiences. Using only the best produce acquired daily from the market and with 38 years of experience, chef and sushi master Ryuichi Yoshii makes the $350 price tag worth every single cent. The elegant and intimate dining space places you right in front of Yoshii as you pair bite-sized delights with wine and sake. Keep an eye out for Yoshii's signature saikyo miso-marinated toothfish, and shiitake mushrooms smoked in cedar.

Opening in 2016, Anason was actually the first permanent restaurant to open on the Barangaroo dining strip. The Turkish restaurant is from the mind of Somer Sivrioglu, the man behind another of Sydney's great Turkish restaurants—Efendy (which is currently relocating). With the authentic Turkish menu divided into flora, fauna, and ocean, expect flavours like grilled oxtongue on toast, tilba halloumi with honey and lavender oil, and snapper with white bean piyaz, tahini, onion and tomato. As for drinks, Turkish roots run throughout with traditional Raki (an aperitif made of distilled grapes and anise) and a selection of incredible Turkish wine you'll be hard-pressed to find anywhere else. 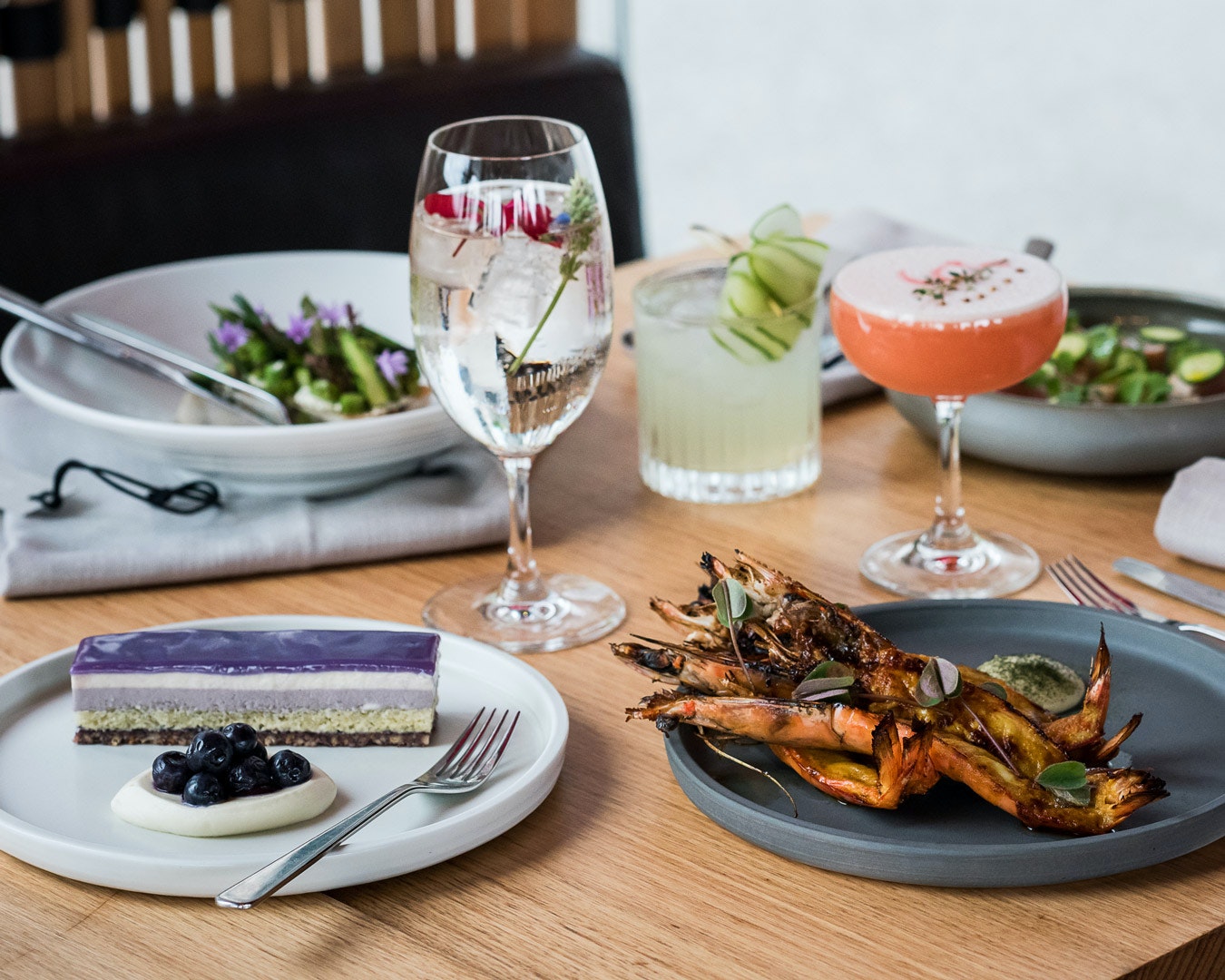 From the trusted hands of chef Brent Savage and sommelier Nick Hildebrandt (Bentley, Monopole, Yellow), Cirrus offers a killer food and wine one-two punch in view of the harbour. Opening in 2016, the restaurant is named for its home in the cloud-shaped Anadara building—but the menu focuses on fresh seafood. Try the Moreton Bay bugs served with corn dumplings, sweet onion milk and buckwheat, or the BBQ John Dory with malt vinegar egg sauce and baby spinach. Pair that with a wine list put together by one of Australia’s best sommeliers, with drops from around the world intended to enrich seafood. 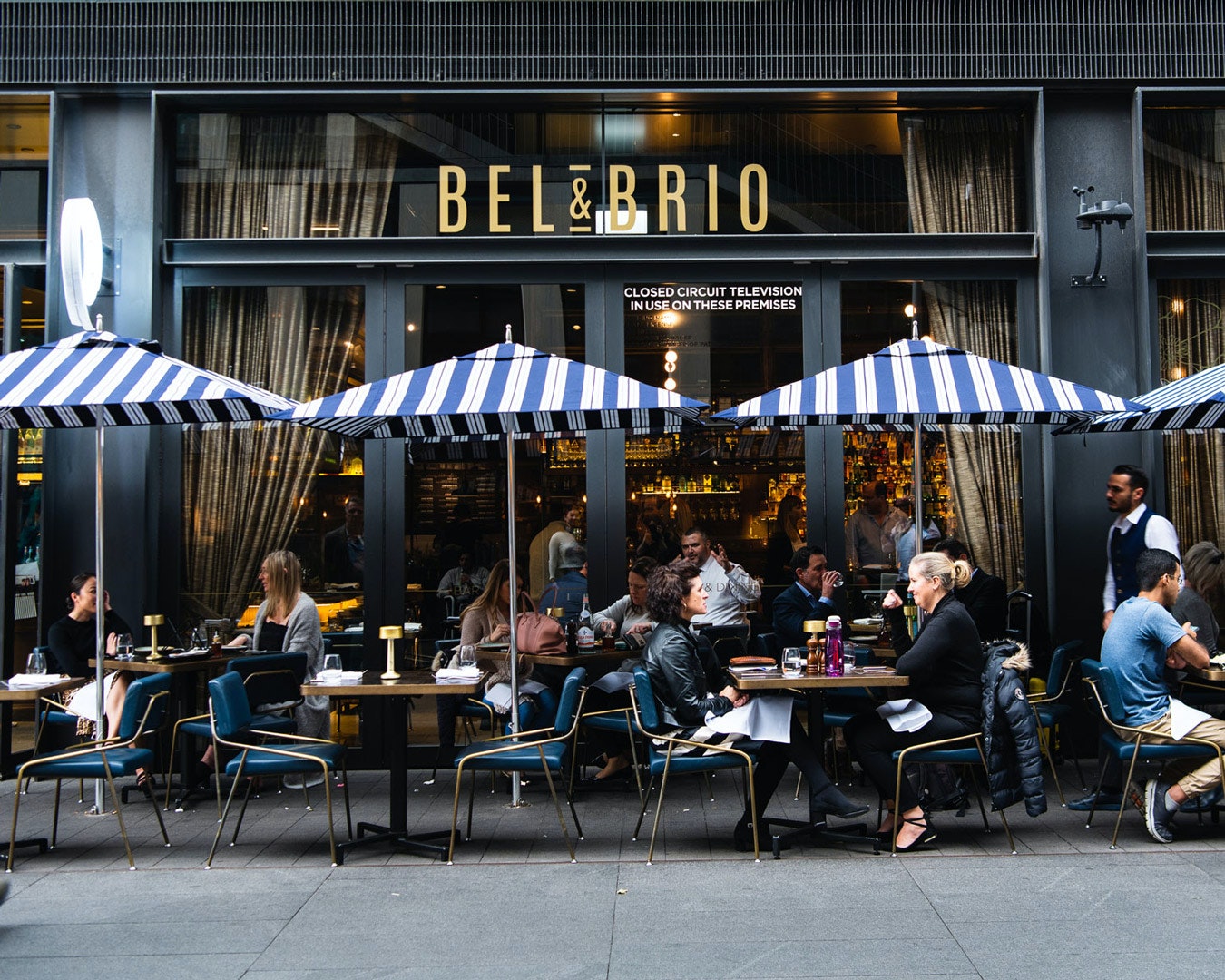 Across 800 square metre European-style food emporium Bel & Brio does it all—from a morning coffee to your fresh produce shop, a bottle of takeaway wine, and a little fine-dining too. For this list, it’s the latter and restaurant Corso Brio we’re interested in. From chef De Michele, much of the Corso Brio produce is sourced directly from the restaurant’s own Central Coast farm. Just think wild caught NZ scampi for antipasti, slow cooked venison ragu tagliatelle for a main, and a Bronte pistachio infused mascarpone tiramisu for dessert. Perfect. 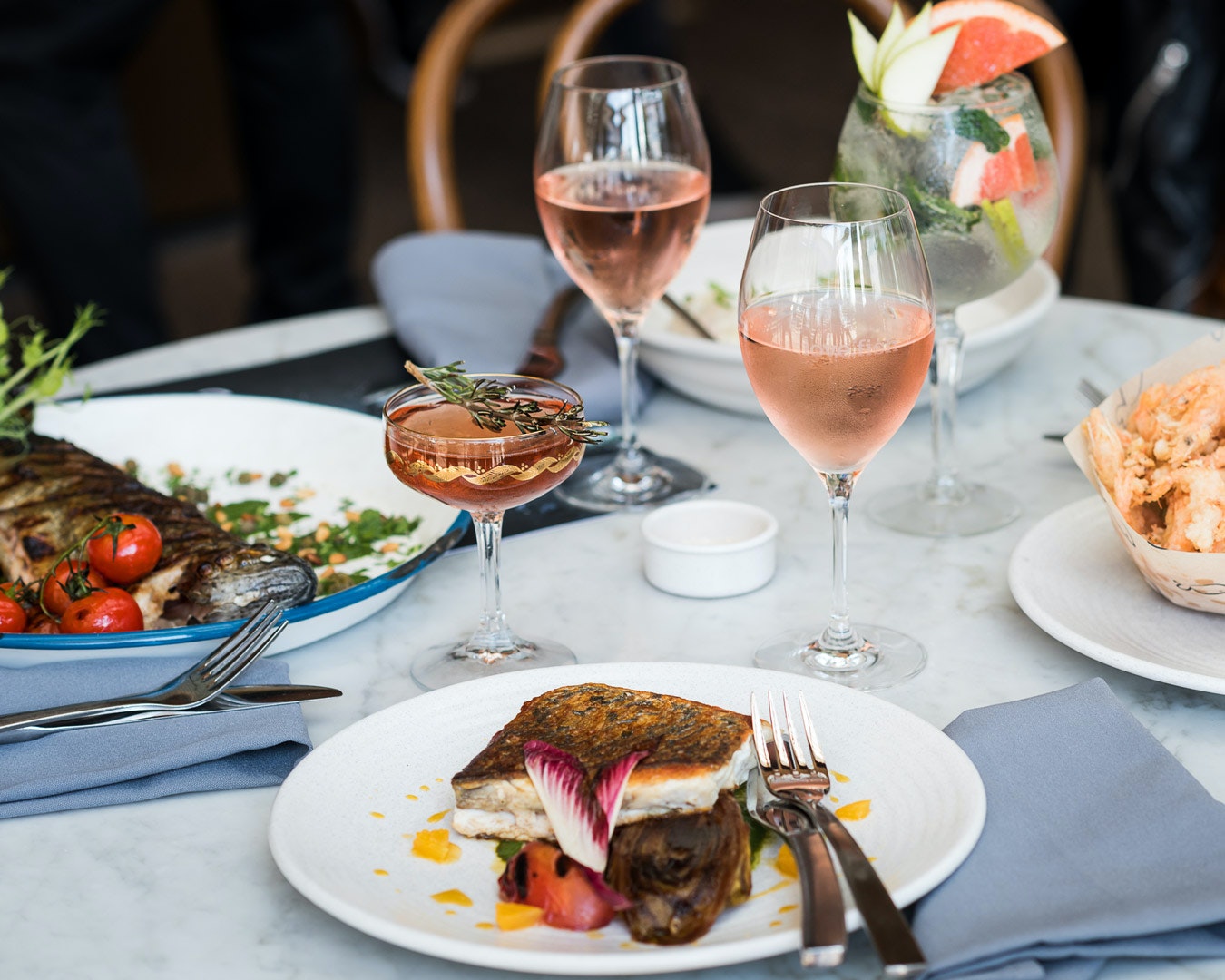 Originally from Rozelle, Love.fish Barangaroo offers some of the best seafood in the area and has the waterfront views to perfectly match the vibes. The restaurant is all about casual Australian dining and sustainably sourced local seafood in a relaxed setting. Raw, grilled, shared or solo, chargrilled octopus, beetroot cured hiramasa kingfish or king prawn and swordfish linguine—tuck into fresh, sustainably-sourced seafood that won't break the bank. And that's without even mentioning the cocktail list that features a salted caramel Espresso Martini that'll knock your socks off. 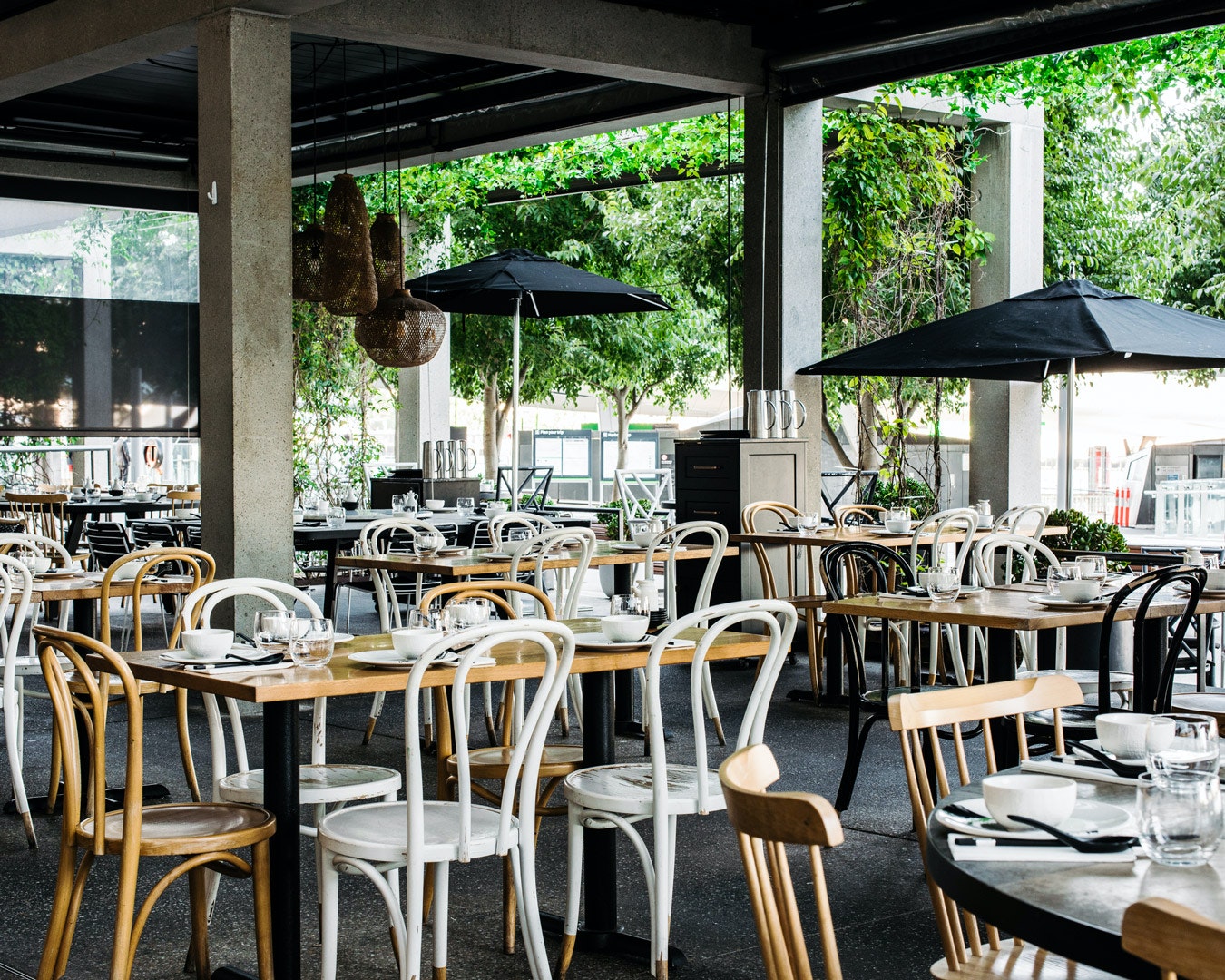 When dumpling masters at Lotus joined Barangaroo's beautiful waterfront dining scene back in 2016, we were beyond stoked. The vibrant, mostly outdoors eatery offers every modern Chinese favourite under the sun, focusing on fresh seafood to complement its setting. It even includes live fish tanks, which you can pre-order from for dinner, if that's your kind of vibe. Inspired by China's rich culinary history, the menu offers a range of local produce from lobster and BBQ duck dumplings to wok-fried pipis and classic kung pao chicken to beef short ribs. If you're up for it, we highly recommend dining out with the banquet ($99pp or $119pp) for more dishes than you can throw a food coma at. 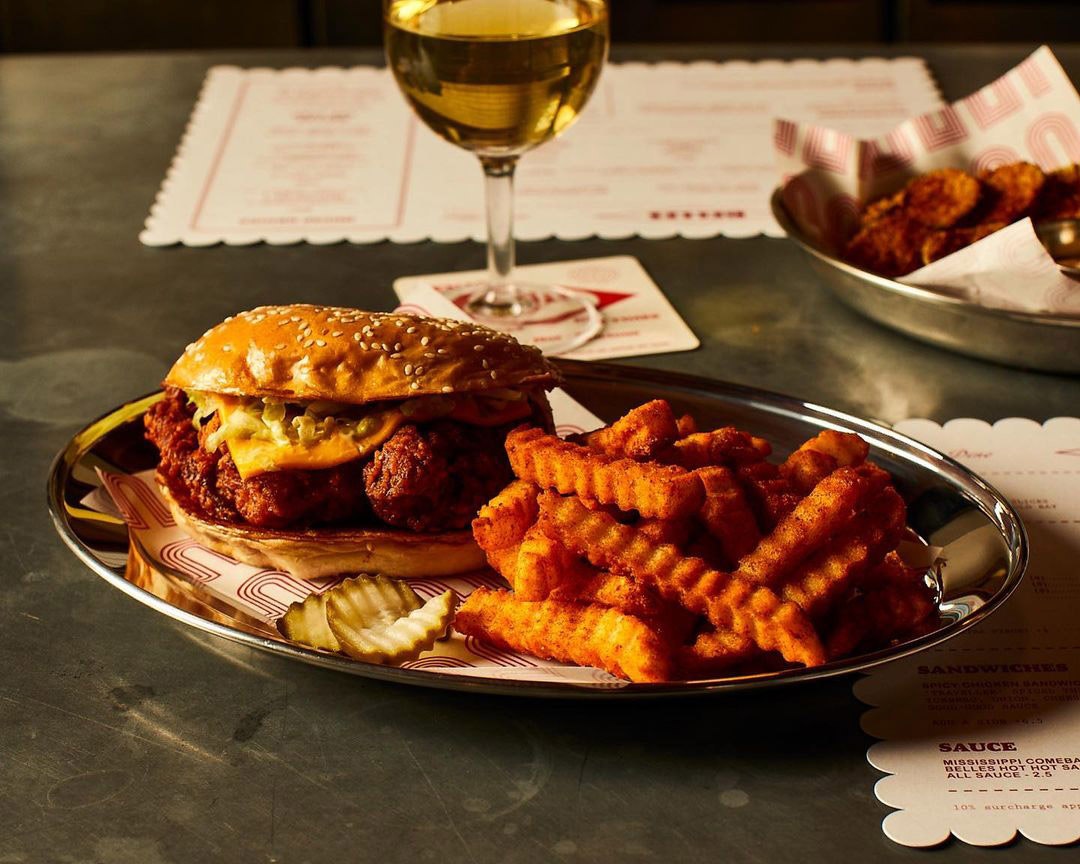 Belles may not fall into any typical fine-dining categories. Still, this Barangaroo outpost of this beloved fried chicken restaurant is one of the best spots to sit down if you've got a serious appetite. Initially making its way up from Melbourne and opening as a pop-up, the Barangaroo outpost was so popular it had to stay. Founder Morgan McGlone discovered a passion in Nashville (aka hot fried chicken heaven) and brought that back with him to Australia. The result: mouth-watering tenders, drumsticks and traditional sandwiches, in spices like "southern" and "really f**king hot", drizzled in sauces like hickory BBQ and Mississippi Comeback sauce. Pair that with Belles' awesome list of natural wines, and you've got yourself a great night out.