14 Of Sydney’s Best Waterfront Restaurants To Book This Summer

Our harbour city is blessed with some of the world’s most famous waterfront views. Iconic buildings like the Harbour Bridge and the Opera House dominate the skyline while beyond we’ve got beautiful beaches, bays, and the twin heads that open out into the wide Tasman Sea.

It makes sense then that we want to spend as much of our time as we can staring out into the blue abyss and finding a top spot to admire our ocean views is one of the best things you can do in this city. Not only is it deep and mysterious, but it’s also often packed with stunning sailboats, hypnotic surfers, and our famous ferries. And, at certain times of the year, whales come and show off right on our doorstep. Not a bad place to be!

Any restaurant that has waterfront views is instantly taken up a few notches in our minds. Food automatically tastes better when you’ve got a great panoramic vista to contemplate. Here we’ve rounded up the best waterfront restaurants that Sydney has to offer. 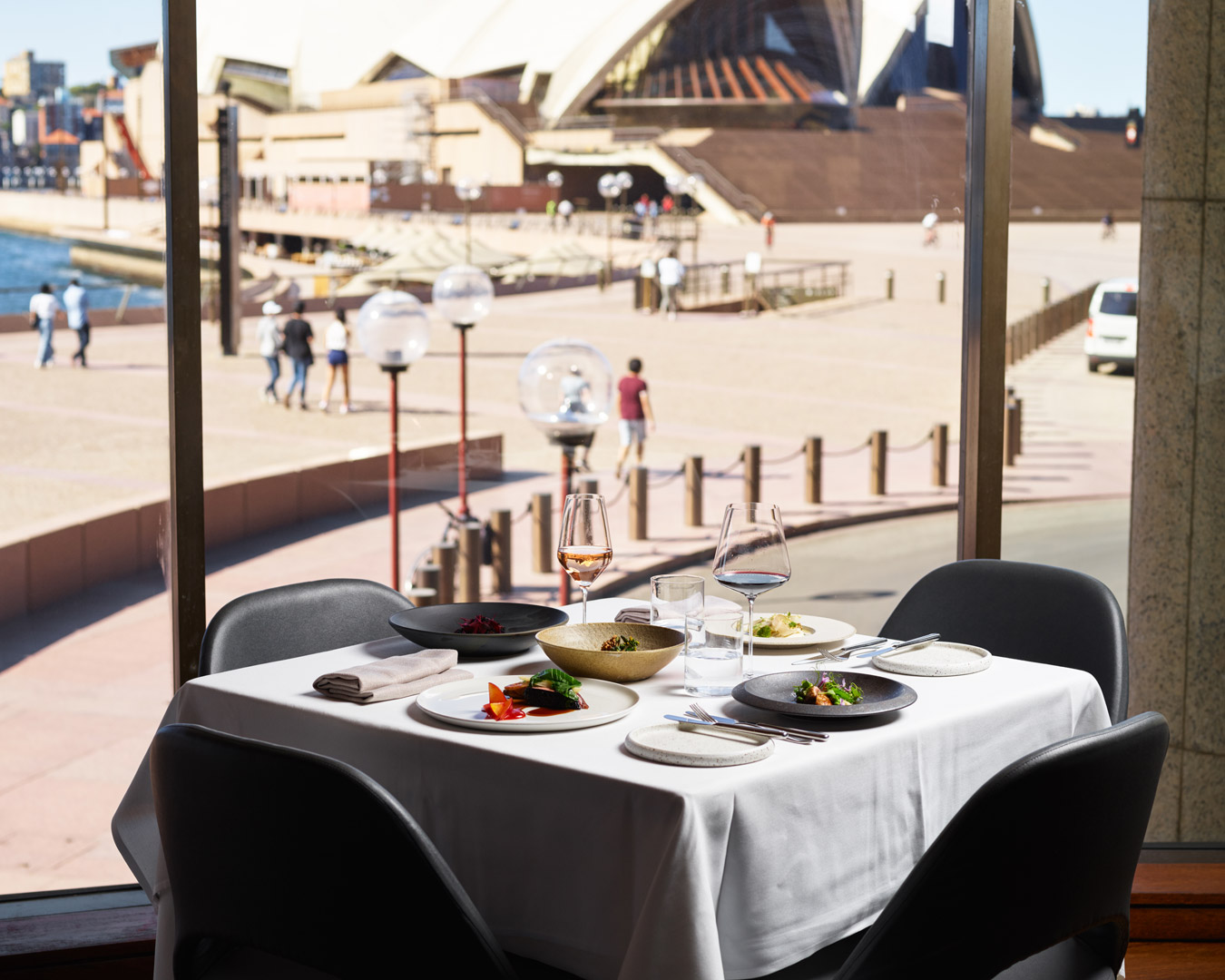 Prime location doesn't quite sum up the glory of Aria—though that is one of its many delicious virtues. Despite the view over Circular Quay, the Opera House forecourt, and the bridge too, it will be the food and wine at this renowned fine diner that will really hold your attention. Owners Matt Moran and Bruce Solomon recently appointed Thomas Gorringe (Bentley Restaurant and Bar, The Gantry) as head chef and he looks set to carry on the restaurant's legacy of stunning dishes made with fine produce from only Australian suppliers. Menu highlights include glazed Maremma duck, salsify, nectarines and chicory; torched bonito with Tasmanian wasabi, green strawberries, and kombu; and Moreton Bay bug with tamarind XO. This is paired with one of the country's most-awarded wine lists. Simply put, Aria is a must-do in your lifetime. 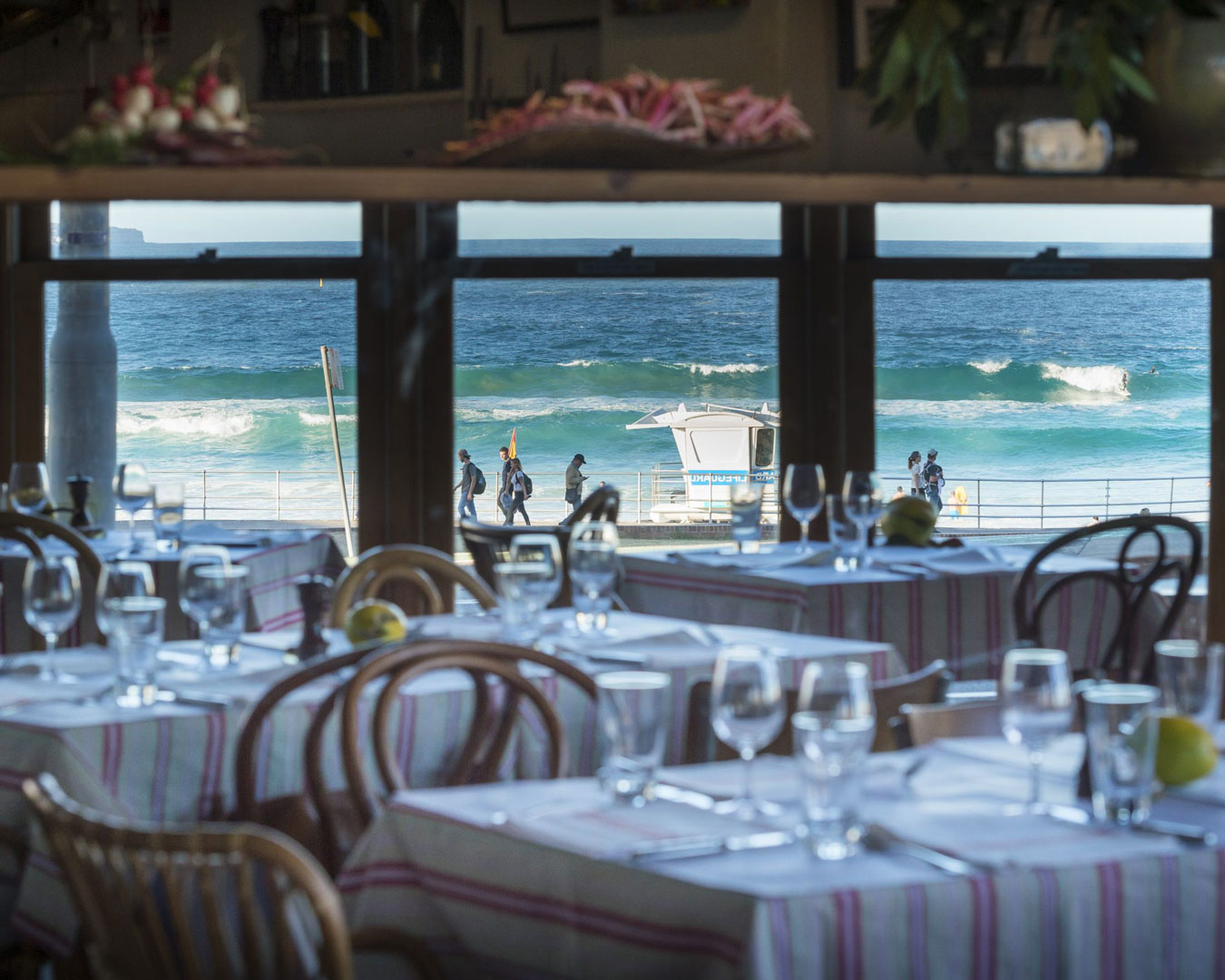 If it's on our best restaurants list, you’d expect Sean’s to pop up here. The waterfront views are one thing—across the road from the North Bondi Surf Life Saving Club, they don’t get much better than this—but the food here is also truly stand out.

Head chef and owner Sean Moran brings his own produce from his 20-acre farm in the Blue Mountains to share amongst good company in the heart of the Eastern Beaches. The menu is a daily special option based on what’s available from the farm and the surrounding local suppliers. This usually means great seafood which is exactly what you want when staring out into the blue surroundings. 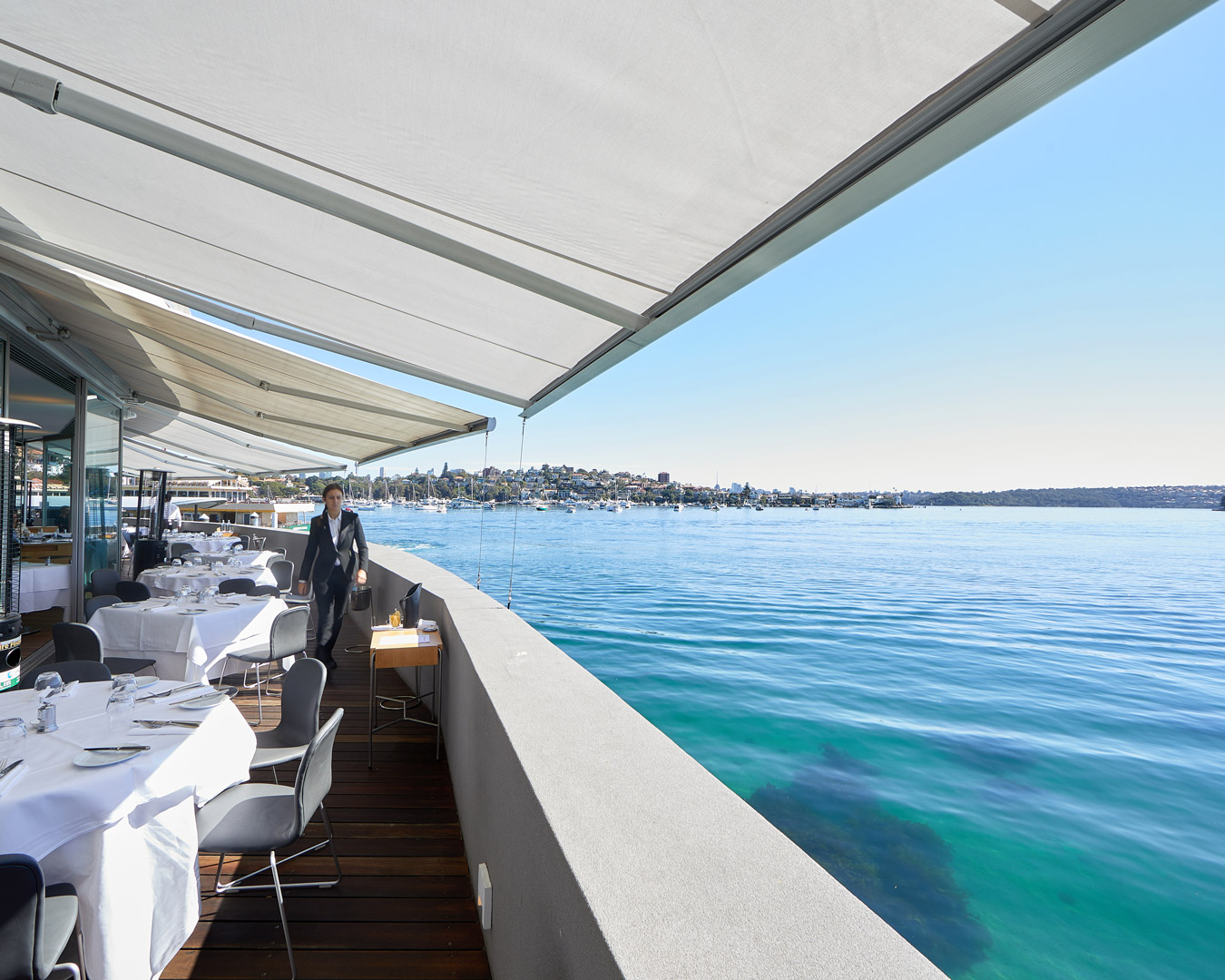 With sweeping views over sparkly Rose Bay, Catalina is one of Sydney's longstanding "special occasion" venues. In fact, Catalina fits into a small class of Sydney restaurants that have truly stood the test of time, opening back in 1994 and being a firm favourite with well-heeled locals and visiting celebrities (like Beyonce and Jay Z) ever since. The bright white, minimalist interior is complemented with pages of champagne and wine to pick from and arguably some of the best Sydney Rock oysters in the city. Other standouts on the menu include soy cured king salmon and crispy skin saltwater barramundi. Paired with that water view and top-tier service? Catalina is a Sydney must-do. 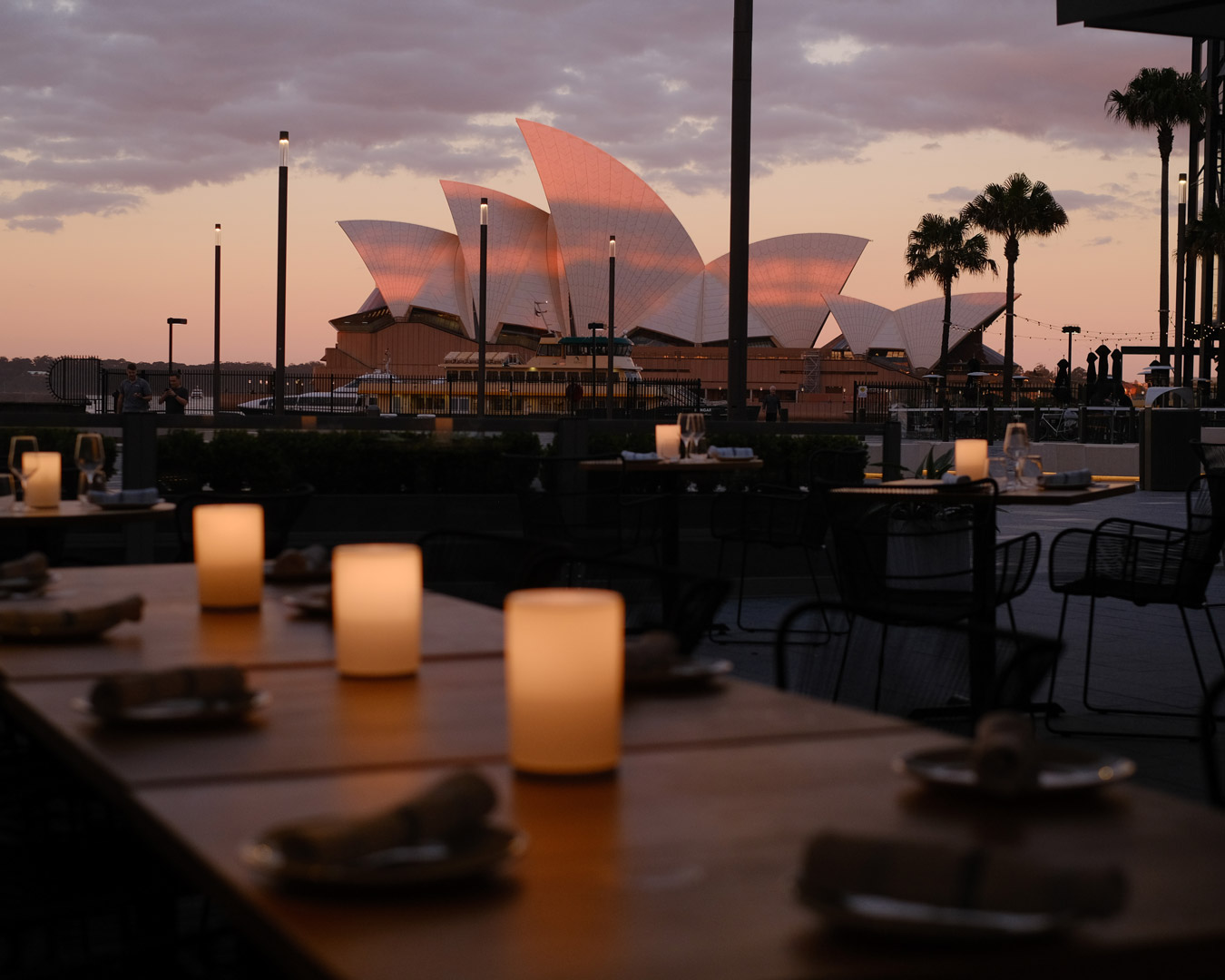 It's all in the name with this stunning waterfront spot. Harbourfront Seafood Restaurant at Campbells Cove in The Rocks opened earlier in 2021 and is your new go-to for pretty water views and enormous seafood platters. Think Balmain bugs with remoulade, Abrolhos octopus carpaccio with salsa verde, cured scallops with chilli, lime and coriander, Appellation Sydney rock oysters and Humpty Doo Barramundi with caramelised lemon dressing. On the weekends, it's a bottomless bubbles and oysters affair, with free-flowing Moët and a dozen freshly shucked oysters, or, if you're hungry, seafood lunch with bottomless bubbles instead. 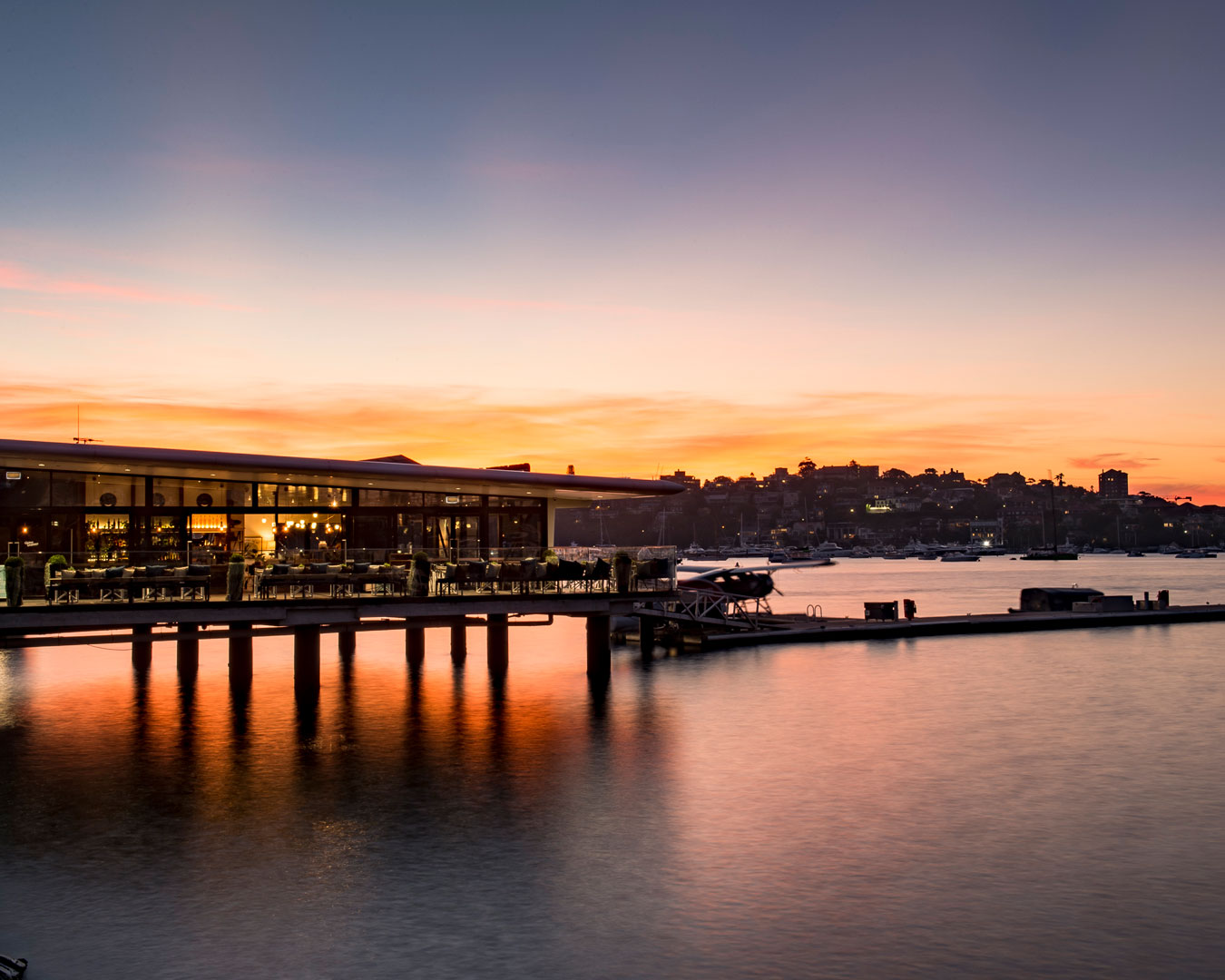 Little known fact about the Empire Lounge, which is the restaurant attached to Sydney Seaplanes, is that this was once the very first spot you would step into when flying into our city. Yes, our first airport was water-based. Sticking with that heritage-theme, Empire Lounge offers stunning views of Rose Bay where you can “sit right on the water and watch the seaplanes while you sip on rose or bubbles”, Mackenzie from Empire Lounge tells us. Chef Faheem Noor dishes up “contemporary Australian”, which for them means tonnes of fresh sashimi, coconut barramundi, or green tea soba noodles with ocean trout. An indulgent way to spend an arvo. 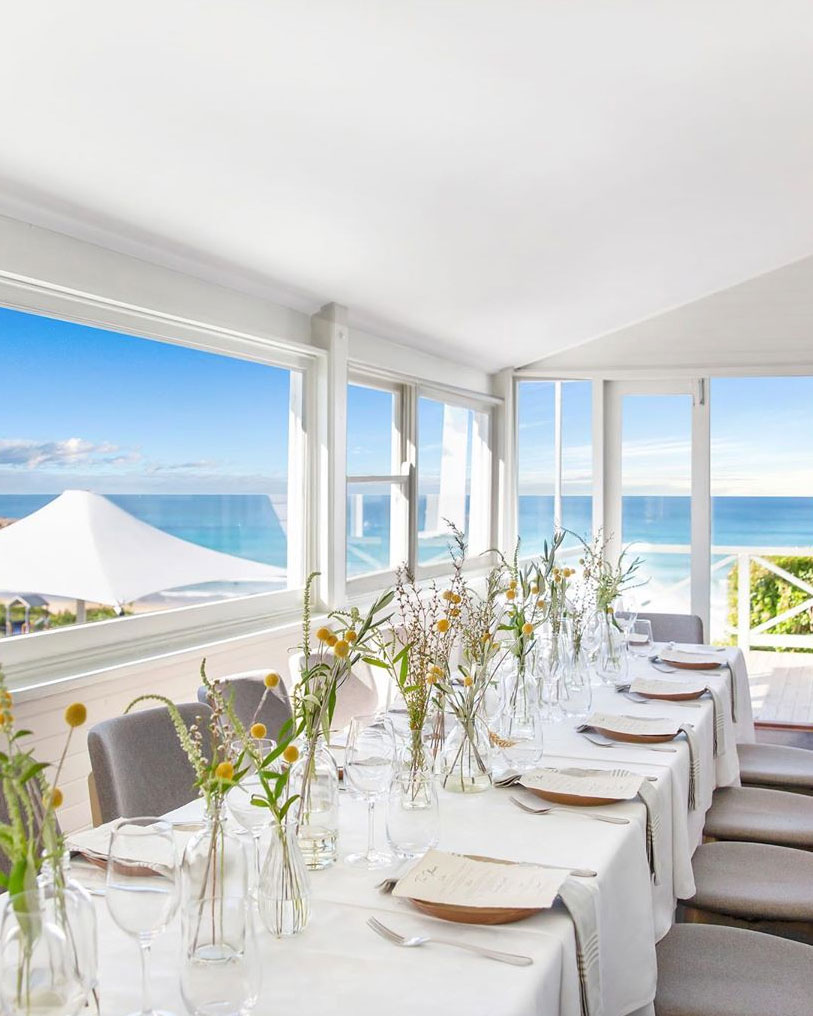 Built into a stunning, sprawling weatherboard cottage on Freshwater Beach, Pilu is an absolute must for anyone wanting to experience the very best of Sydney's dining with a side of fresh, seaside air. Pilu has two chef hats—a culinary title that is well deserved. The menu is inspired by owner Giovanni Pilu's Italian home, Sardinia, but champions local produce. The hero of the menu has to be the crisp-skinned suckling pig for two with rosemary potatoes, but we're also very into the refined desserts on offer. 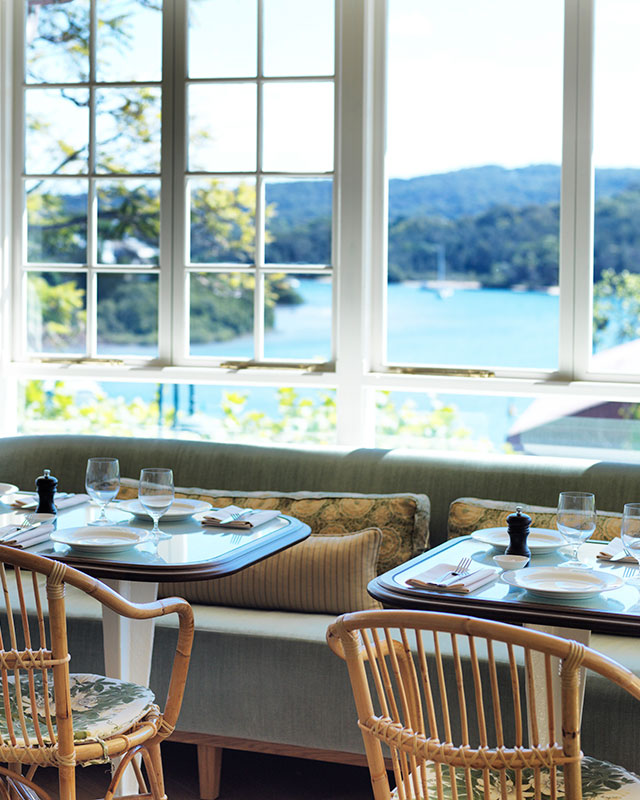 Up around the very northern tip of the Northern Beaches is Bert’s Bar and Brasserie, a hidden branch of the Merivale empire that overlooks Pittwater's sparkly waters. It’s part of the Newport Arms Hotel, raised up on level one to give good views of the surroundings. Diners at this high-end establishment can browse the iced-up fresh seafood bars and peer into the live lobster tanks before sitting down to a Mediterranean-inspired feast. It’s a steak tartare and squid ink pasta marinara kind of place and does it damn well. If you’re keen on a special splash out with a view, Bert’s is the place to do it. 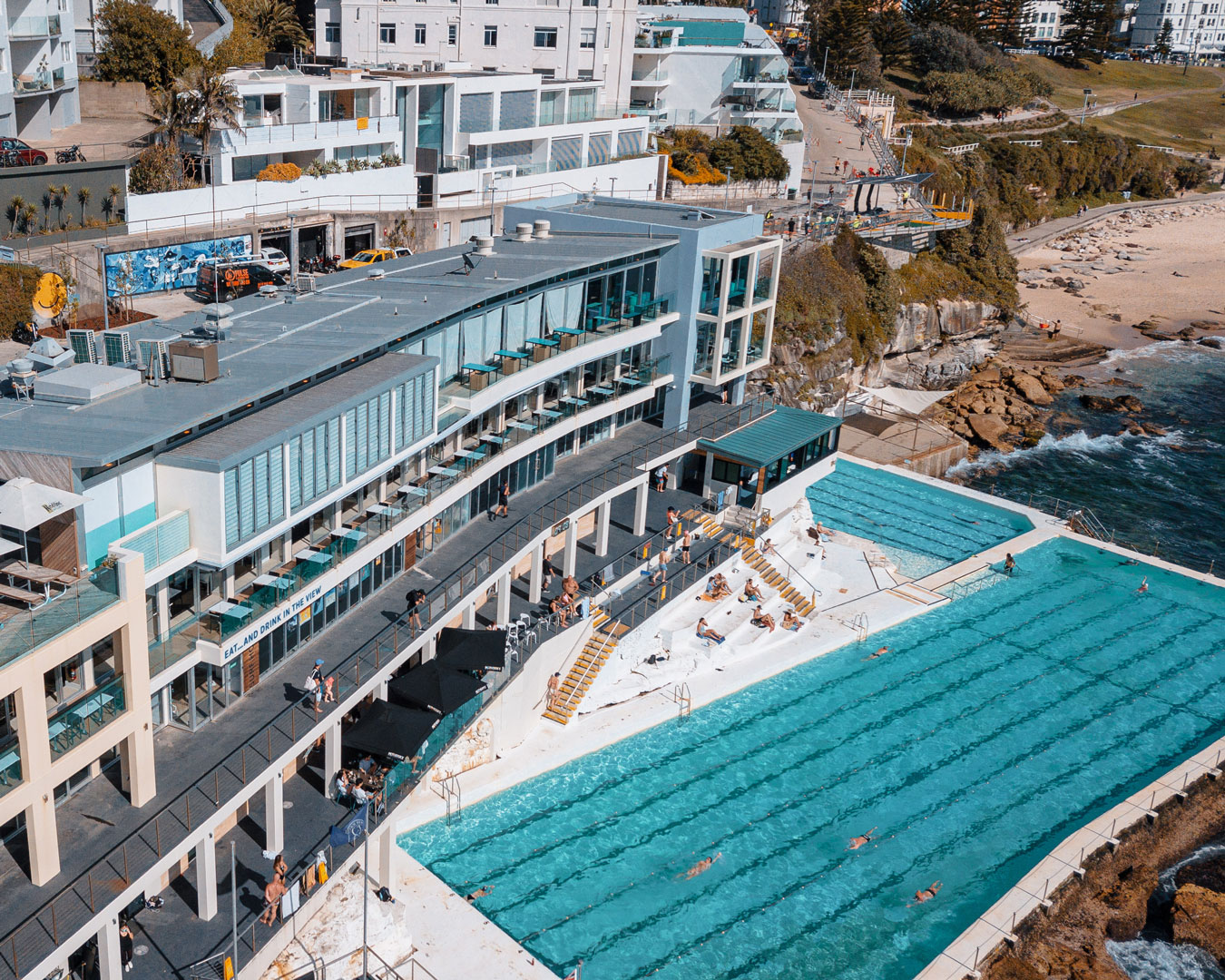 Probably the most famous of the seafront views in Sydney, Icebergs truly capitalises on the glory of our city’s most famous beach. Icebergs Dining Room and Bar is on the top floor of the multi-venue space and specialises in modern Italian with a heavy seafood tilt. You won’t find pizza here but instead a smattering of innovative pasta dishes like the cuttlefish and pancetta agnolotti and the spanner crab macaroni. But it’s the meat dishes that really take centre stage like the 10-day aged Maremma duck with mustard fruit and rose jam. It has a bit of a reputation for exclusivity, but the service is as chilled out and friendly as the Bondi surf lifesavers down on the beach. The tiny terrace is the best spot for ocean views and serves more relaxed bar foods along with a range of Ketel One cocktails. 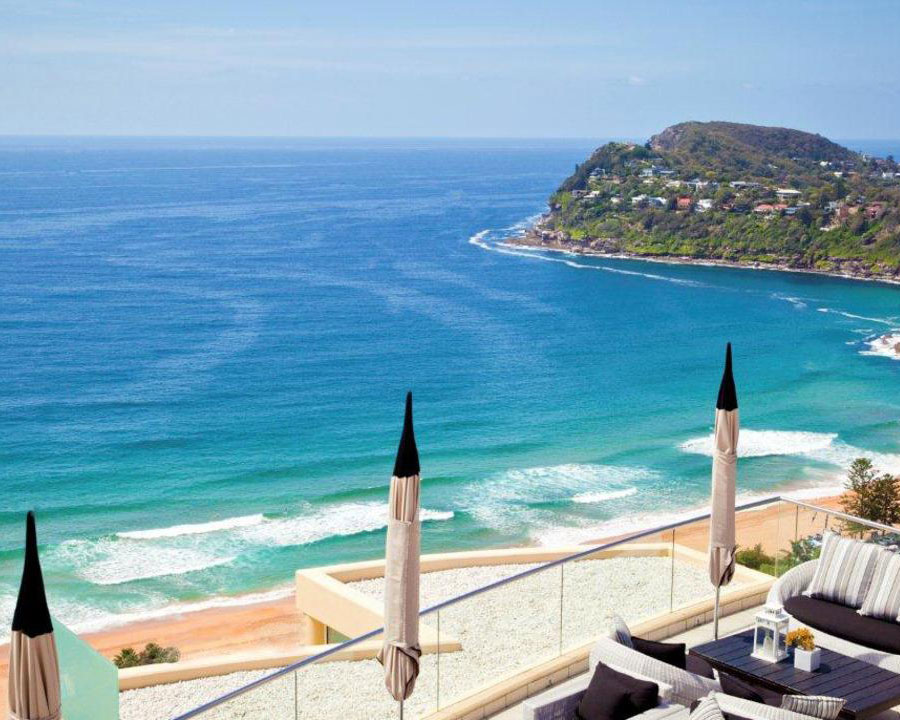 Also at the far end of the Northern Beaches, you’ve got Jonah’s, an iconic hotel and dining establishment that has served some of the world's biggest stars throughout its 90-year history. Mick Jagger, Lawrence Olivier, Anthony Hopkins, and Queen have all dined here meaning head chef Matteo Zamboni has a serious reputation to uphold. The set menu clocks in at $110 and features hiramasa kingfish and orange and saffron Murray Cod. Their wine list is equally indulgent, with over 1,600 bottles to pick from their 11,000 strong cellar. The panoramic views of Whale Beach just below you are made all the more enticing when you’re sipping vintages of this quality and selection. 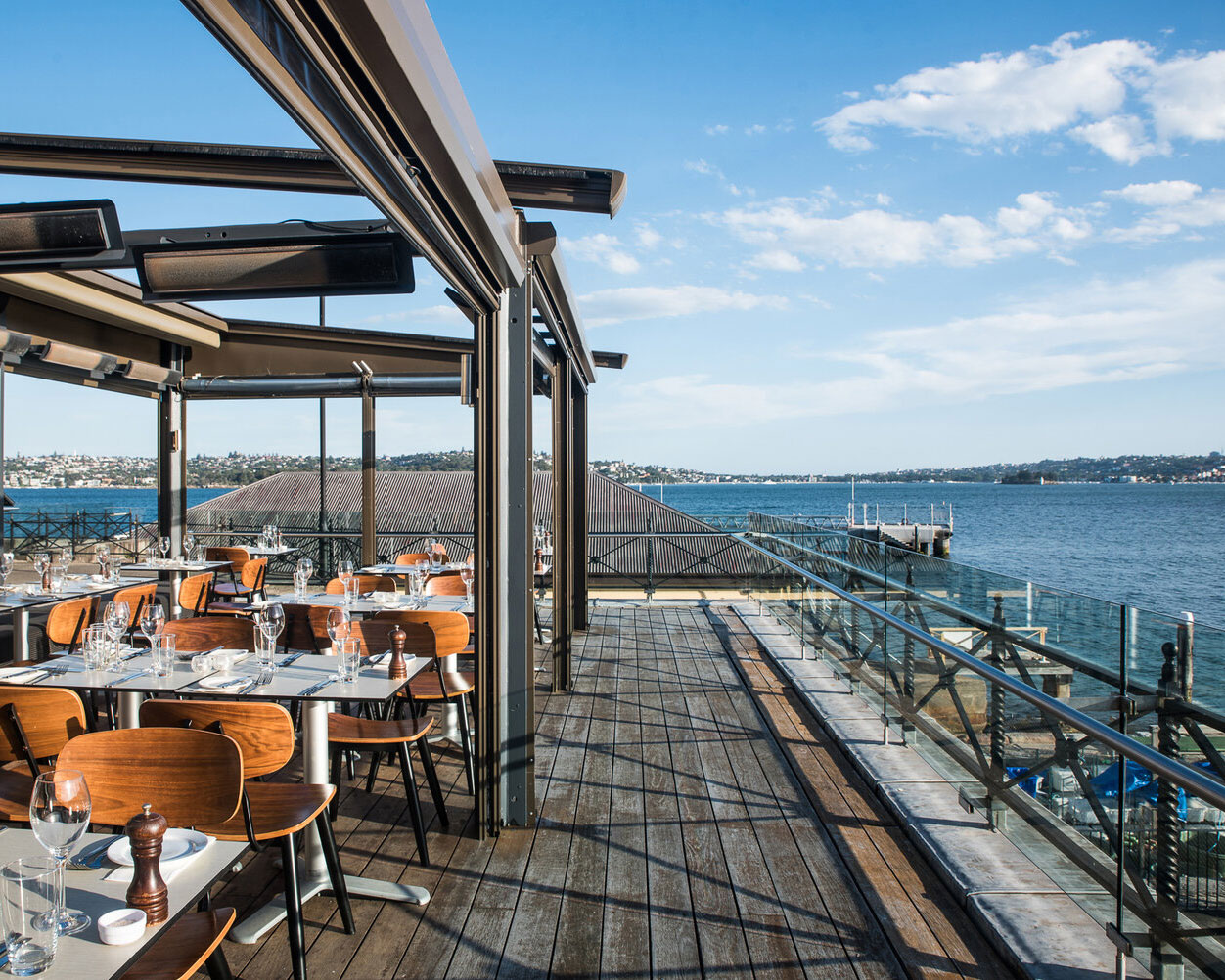 The Chowder Bay branch of the popular Ripples is situated on an old military sea mine factory built during the First World War. In fact, the military still retained control of the area until 2007 when Bill Drakopoulos, owner of one of Sydney’s most respected restaurant groups, the aptly named Sydney Restaurant Group, took it over from the Sydney Harbour Federation Trust.

It’s a modern Australian fine dining affair with unparalleled views of the Eastern Suburbs from the leafy vantage point of Middle Head. “It's just an incredible space”, Drakopoulos tells us. Open for lunch and dinner seven days a week, they run a BYO service along with their wine list and serve local favourites like confit duck, beer-battered fish and chips, and their famous chicken liver pate. “My wife would shoot him if he ever took that off the menu”, Drakopoulos says about head chef Kristian Gamble. “It's just one of those very unique settings on the harbour. You feel a million miles from anywhere”. History buffs can also book one of their infrequent local guide packages to work up an appetite. 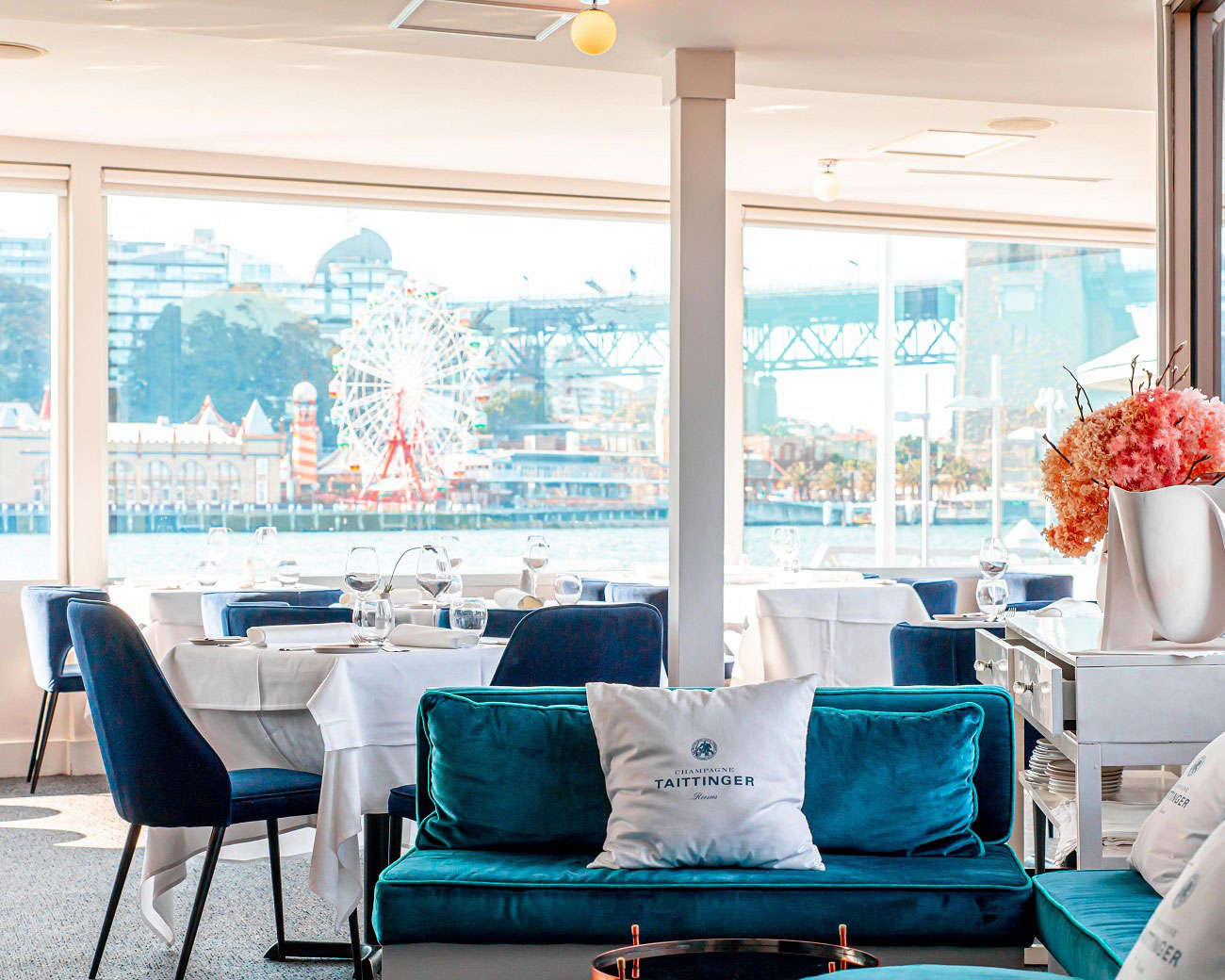 If you’re looking to take in some of the most iconic views of the harbour, Sails on Lavender Bay is the place to do it. The large glass windows here open out onto Luna Park, through the Harbour Bridge, and beyond to the white domes of the Opera House. For 40 years they’ve captivated diners with stunning views and equally stunning cuisine. Head Chef Saro Derderyan does French in the robust sense, but is also packed with interesting, dynamic flavour combinations. Degustation comes to $140 before wine pairing, so it’s a good one for special occasions. Make sure you go at sunset for the full effect.

Lavender Bay is simply spoilt for views and Lavendra is another signature staple of the area with a slightly higher vantage point on the bridge. Really good Indian food is quite hard to find in Sydney but this place is a reliable go-to for those craving rich, authentic curries, kebabs, and chat potatoes. They take their cooking seriously here too, with the dining experience undertaken as an art form. The menu is redesigned seasonally and right now is inspired by the work of Punjabi poet Amrita Pritam. Each course in their set menu comes with a fragrance pairing to engage all of the senses and staff wear specific dress to reflect the seasonal theme. It’s a whole performance that makes a show out of dining and worth checking out. 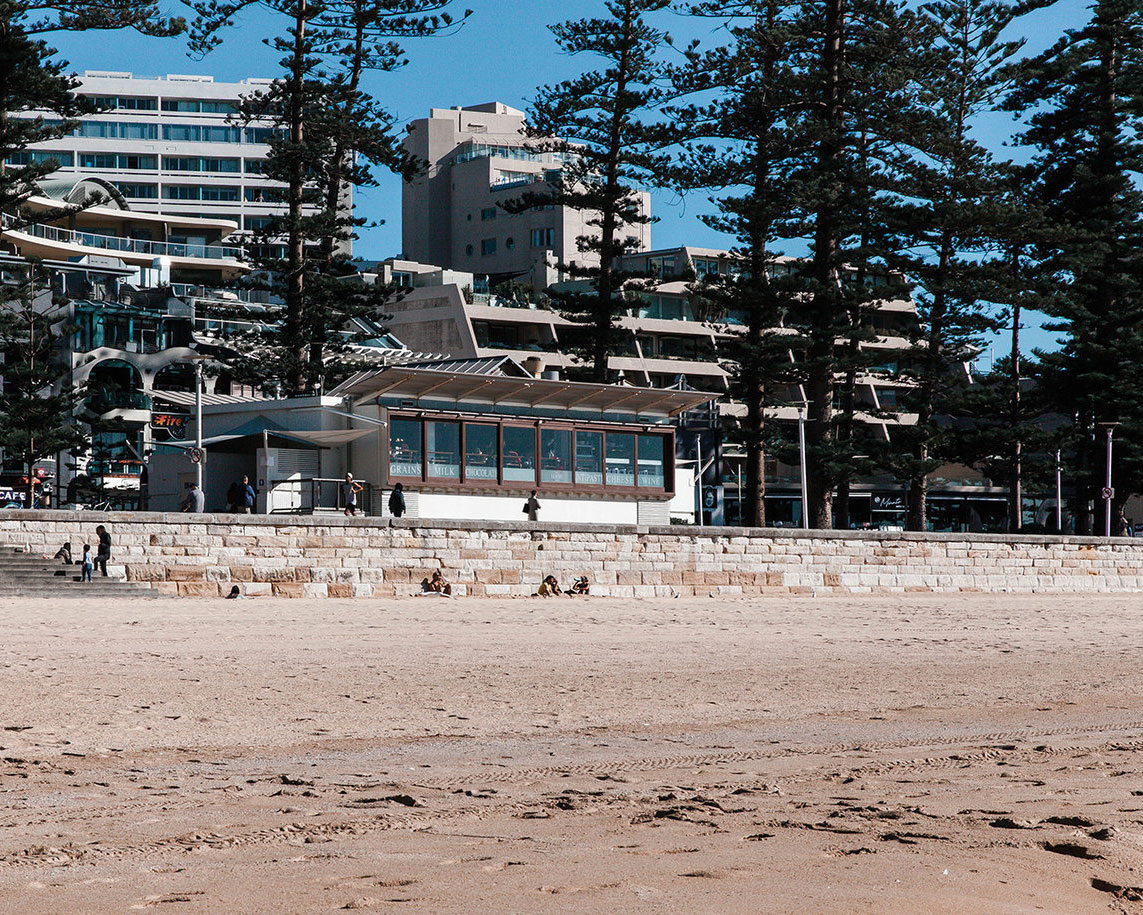 The closest you can get to the water in Manly without actually getting sandy. The Pantry serves up modern Aussie from morning until night in a refined setting with glorious oceanfront views to keep you entertained. It’s your favourite staples like smashed avo and eggs benedict taken a few notches up the social ladder in the AM and in the evenings it gets blown out of all proportion with such a huge range of dishes that you wonder how it’s all contained under that tiny roof. They offer charcuterie boards, tapas, and eclectic entrees, each one of which is the greatest hit of other classic menus. Mains to try are the seared Yellowfin tuna with Nicoise salad and the herbed rack of Junee lamb.

Doyles On The Beach

Rounding it off with a look back across our fair city is the eminent Doyles. The Doyle family have owned and operated on the site for the past 135 years and pride themselves on their fabled fresh seafood. “Most product is sourced daily from the Sydney Fish Markets and processed in our own facility at the fish markets in Pyrmont,” Ben Doyle tells us. The whole in-house process makes them one of the few restaurants in Sydney fully operating their supply chain. Facing West, the restaurant is ideal for sunset viewing which can be taken in either at the casual dining garden bar or their a la carte white linen table service restaurant.

It’s truly “magical views and sunsets to die for,” as Doyle puts it, and might actually take out the top prize for waterfront views in the city.