10 Of The Best Greek Restaurants In Sydney, As Chosen By You

To celebrate our 10th birthday here at Urban List, we’re asking you to tell us your top 10 lists over on our Instagram—we asked and you delivered on where to find Sydney's best Greek restaurants.

Sydney’s Greek ex-pat community has a long and storied tradition amongst our sandy shores. From the salty coastlines of the Eastern Beaches right out to the foot of the mountains, you’ll find Greeks having settled down and started doing what they do best: cook.

Actually, it’s not just cooking that is an icon of Greek culture. Food is more than simply sustenance, it’s a celebration, a time to be together amongst friends and family, and a way of paying homage to tradition and history. There’s a reason that stereotypes like mountains of dolmades and smashing plates exist. This is the food of the Gods and ought to be treated as such, Dionysian indulgence and all.

The Hellenic community knows how to have a good time and they’ve been sharing that good time with the rest of us for over a century. While Melbourne is widely considered the Greek capital of Australia, Sydney puts on a seriously strong showing too.

From the special dining spots to superb street food and easy-going, accessible wraps and salads, here’s our round-up of 10 of the best Greek places Sydney has to offer.

The Best Greek Restaurants In Sydney, As Chosen By You 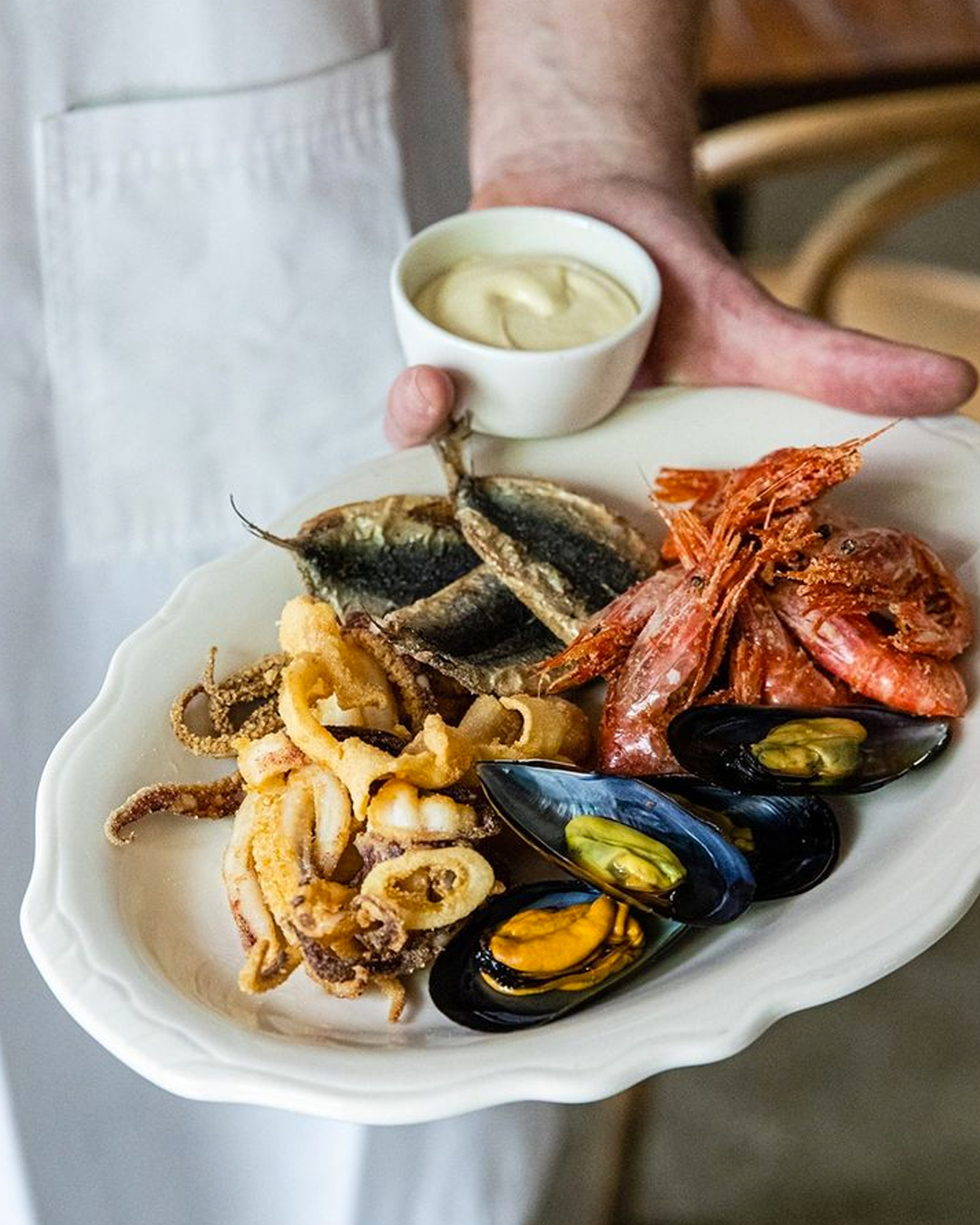 One of the jewels in the Greek crown of Sydney, The Apollo is high-end Greek finery served in warm, atmospheric surroundings. It’s all dim lighting and moody music and a great place to enjoy an intimate date night. Kicked off by chef Jonathan Barthelmess and restauranteur Sam Christie back in 2012, it packs all the Greek specialities you would expect like oven-baked lamb and charcoal chicken with yoghurt but in a more refined, occasional fashion. The saganaki cheese with honey and oregano—a hot frying pan of melting cheese and honey—has become one of Sydney's most beloved dishes.  @rishijadolli says the saganaki is the go while @heididehaas says the taramasalata is the true king here. 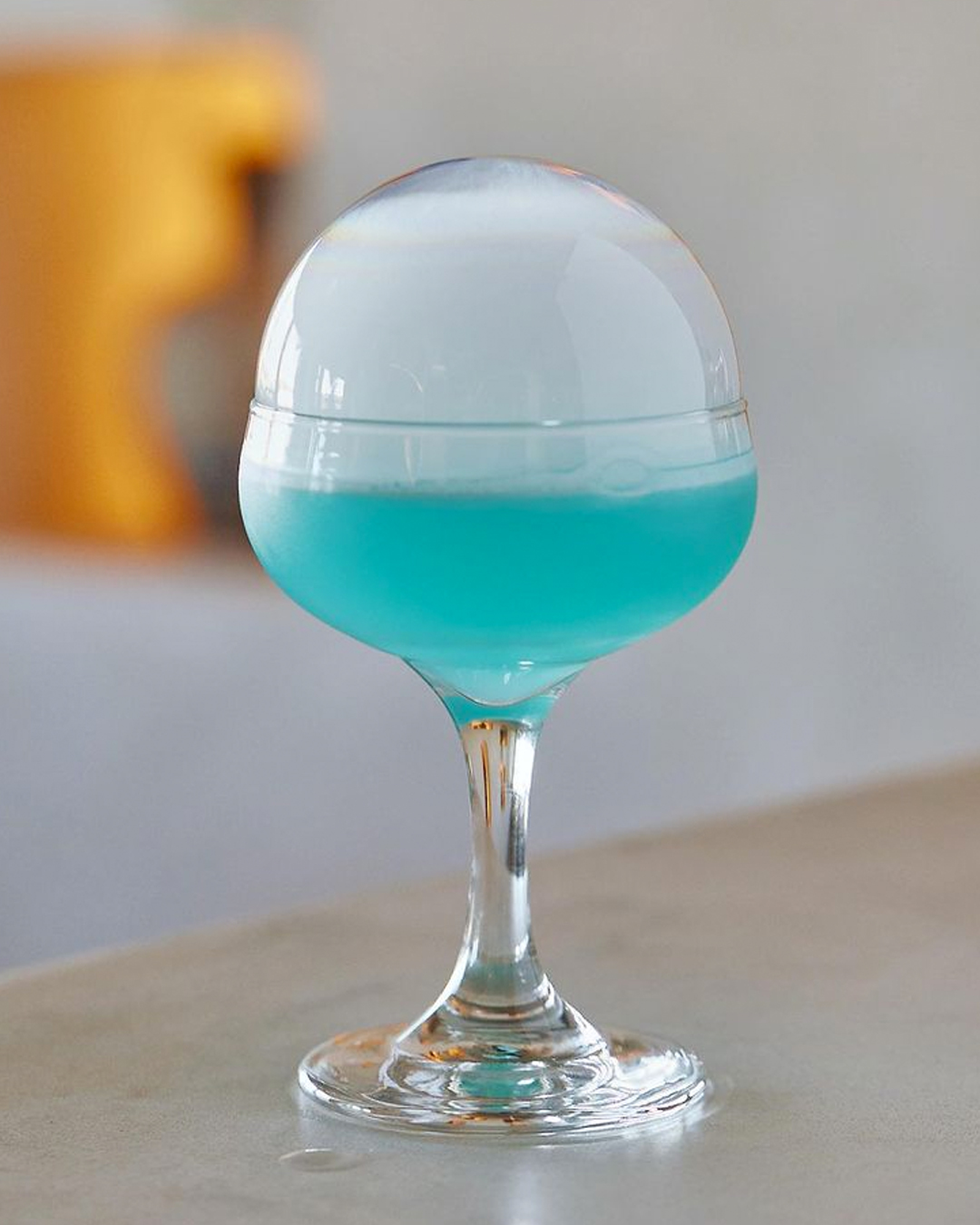 Ikaria is a Greek Island in the Aegean Sea where it's believed people are said to live the longest and we mean, how can you oppose that? This beachside restaurant offers up Mediterranean mezze at its finest, with two banquet styles to choose front. You'll get to sink your teeth into marinated olives, grilled pita bread, taramasalata, lamb shoulder, and fried calamari. The cocktail list goes strong with the classics but it's Ikaria's originals that shine the best with a Baklava Fizz, Hellenic Calling, Aegean Spritz, and a Blue Zone Margarita. @its_del says Ikaria Bondi is "absolutely delicious, modern, has to-die-for cocktails" plus keeps a stunning interior and view.

This family-run Greek restaurant in the heart of Enmore is a local favourite, decked out with wooden chairs and blue and white checked table cloths. While the whole menu is a win with carious dip combos, soutzoukakia, zucchini dumplings, and sparakopita, the BBQ octupus should be your go-to. As well as being a staple after any show at Enmore Theatre, @stavoooaay says this gem boasts "authentic Greek food cooked with love". 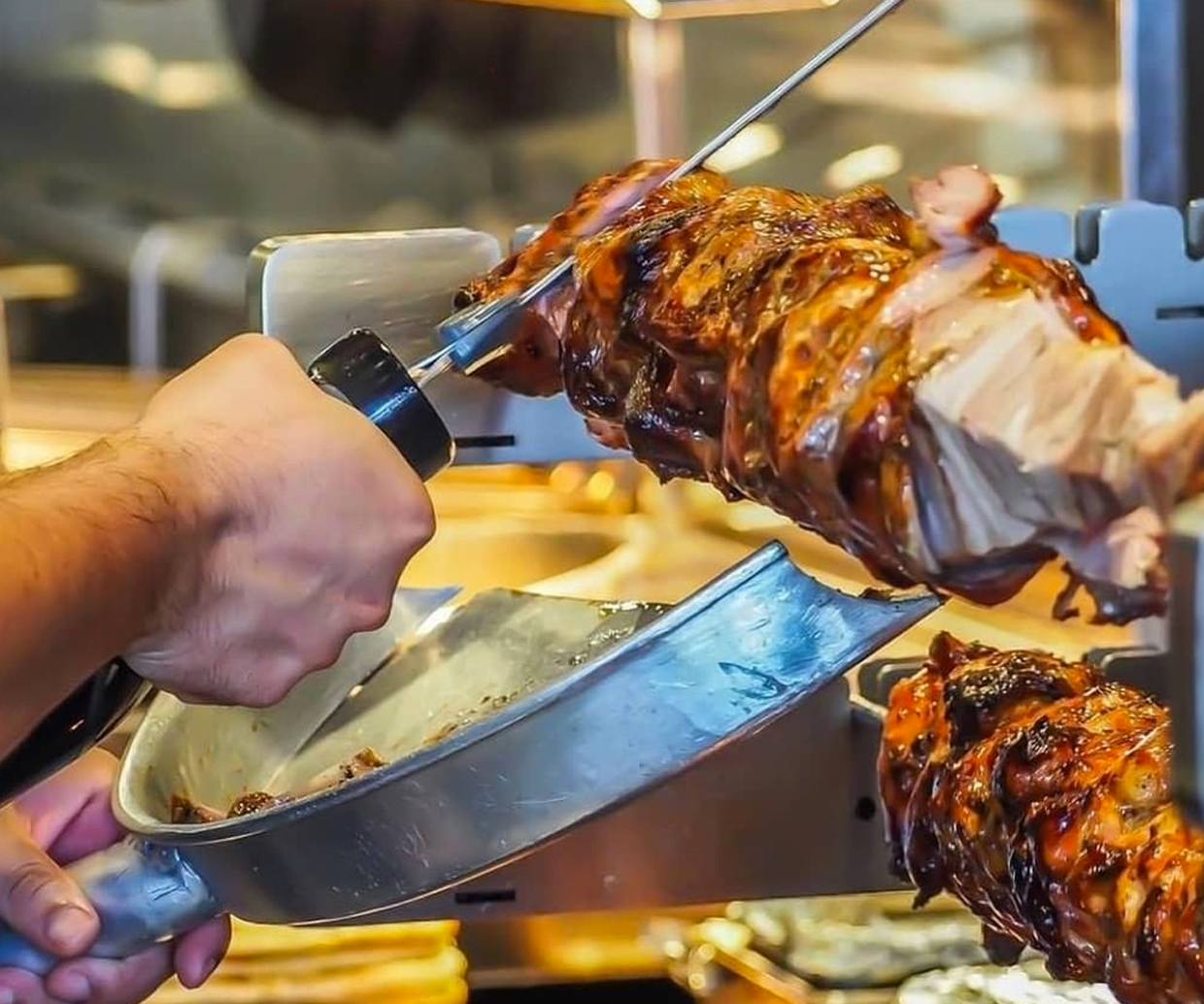 Kazzi Beach Greek is one of Sydney's most authentic Greek island tavernas. Taking inspiration from the island of Kastellorizo (Kazzi), this blue delight showcases a certain type of Hellenic cuisine affectionately known as "Beach Greek:—the very kind of street-style Mediterranean offerings found along the blue shores of the Aegean. Starring on the menu is everything from mezze winners like grilled octopus and chargrilled prawns to tender meats fresh from the spit. @marybattista says this one "feels like you've just set foot on a Greek island'. 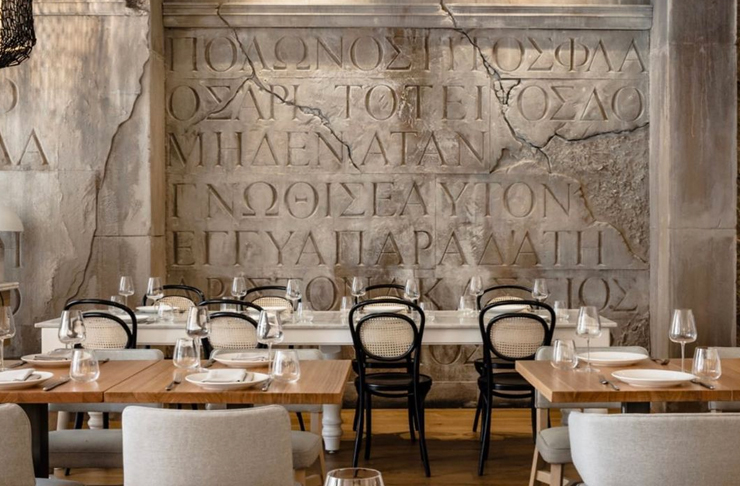 After a stunning multi-million dollar glow-up, Greek fine diner Alpha has made a stellar comeback. The food line-up is a stellar creation from executive chef Peter Conistis—hero dishes have remained, like the scallop moussaka, slow-roasted lamb, and Alpha spanakopita. The rest of the menu has been reimagined along with head chef James Roberts (China Doll, Est.) and an of-the-moment theatre-style kitchen complete with a fiery Josper Oven for an aroma-inducing charcoal cooking experience. It's widely known as one of the best as backed by @michialeb, @alby_hayden, @maria_stathos, and pretty much the rest of Sydney's Greek community.

Eat GRK gives the best authentic Greek food in Sydney by taking your tastebuds to summery days in Athens. The menu embraces traditional Greek techniques of cooking, carving lamb and pork off the spit for fresh souvlas, pita wraps, and meat plates.

The dips are all a must-try, creamy feta cheese, tzatziki, kalamata olive spread, and the secret Eat GRK sauce. But, most of all, we want to kiss the genius who came up with haloumi chips, a combination of two of the best things this world has to offer, cheese and deep-frying. Finish off with the loukoumades, traditional Greek doughnuts, soaked in honey syrup, sprinkled with malt biscuit, and with the option of adding Nutella for $1.90 you'd be crazy not to. It's a must, says @heididehaas. 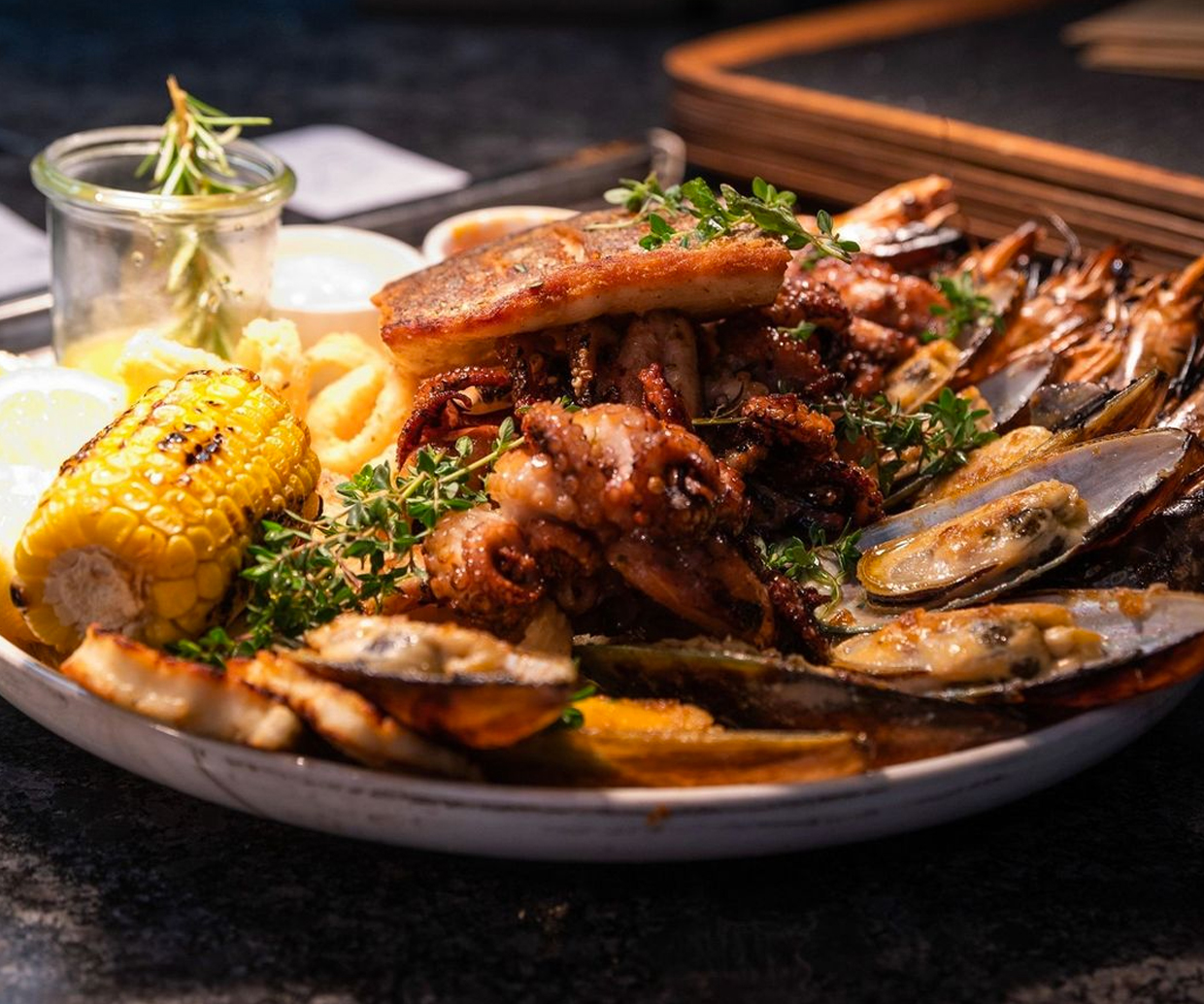 The Mougios family has owned a bunch of restaurants in the Brighton Le Sands area for over 30 years, Meet The Greek being their iconic iteration of a warm and friendly restaurant that provides good quality, village-style food. Sink your mitts into dodoni feta slabs, village 'karvelli' bread, saganaki, and feta hot filo parcels. There are also prime cuts of lamb and pork souvla, all marinated in a combo of Meet The Greek's special herb mix for 24 hours. Take it from @melissakotsofski, it's one to hit.

The summer of '69 was a year to remember, most notably for the installment of Xenos Restaurant. As one of the first al fresco dining spots in Crows Nest, the status of this Greek restaurant is hard to beat. Stripped in all the classics, (including epic spanakpita, moussaka, and souvlaki) the real MVP looks like a Greek-style slow roast lamb shoulder with baked potatoes and chicory. You can thank @rebeccacherote for this recommendation. 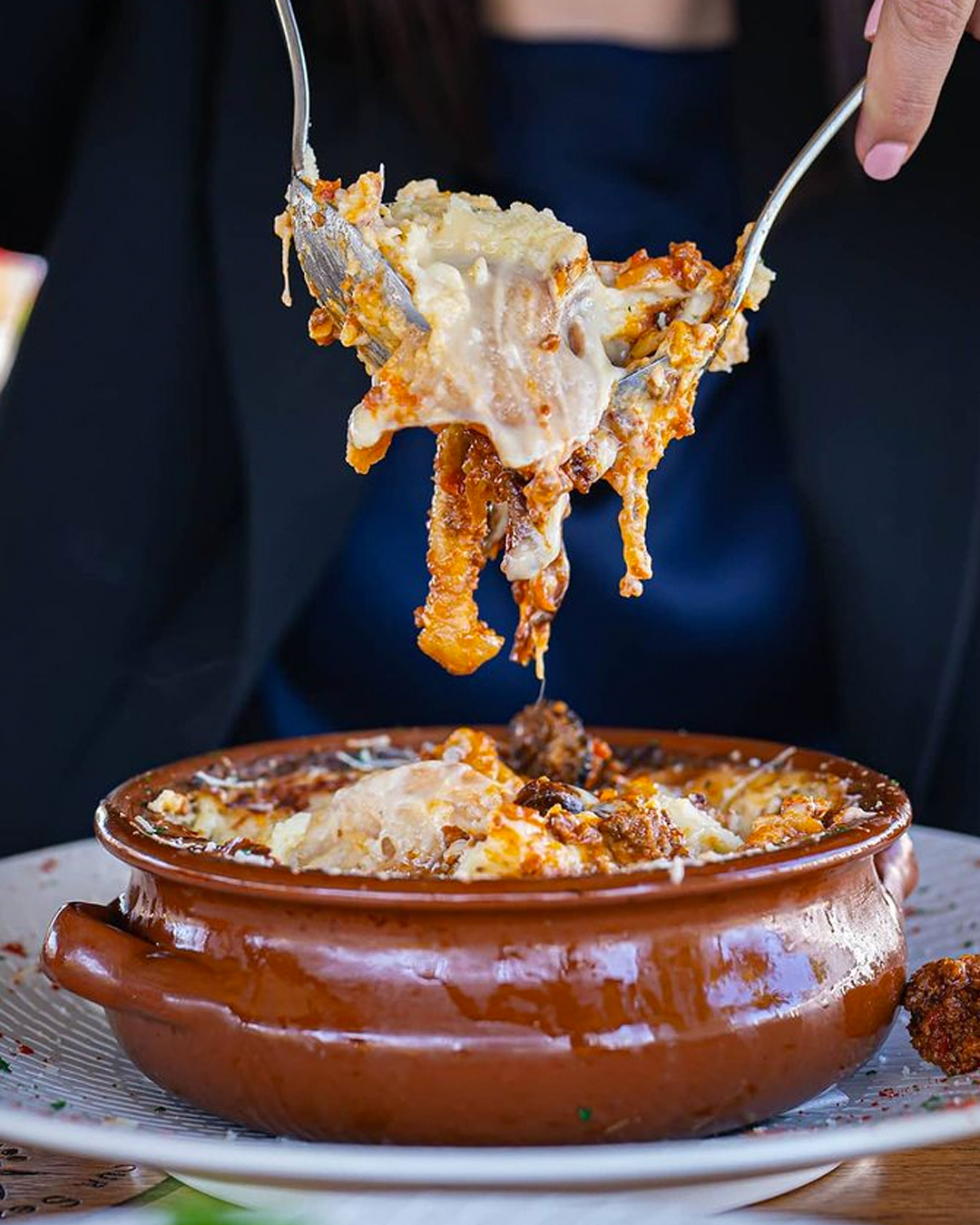 Having opened back in 2017, the word "avli" comes from the Greek word meaning "the backyard". Located inside a heritage and refurbished church, the aesthetic here is unparalleled. You'll find traditional Greek feeds here with the best quality Greek ingredients and local fresh produce, all prepared onsite daily. The foodie line-up is the work of executive chef Dimitris Rigas—born in Athens a well-known chef for some 30 years. There's also a large selection of Greek aperitifs, ouzo, and tsipouro, otherwise known as the nectar of the gods. @lillyblue84 says this Greek restaurant is "just beautiful'.

This place is better than it has any right to be. Away from the main action of Enmore Road, Barzaari crafts this instantly Greek experience with mindblowing dishes packed full of flavour and succulent as hell. It’s simple, unassuming food that just pops when you bite down and draws inspiration from the Cypriot history of the family who owns it as well as broad Eastern Mediterranean and Middle Eastern cuisine. Baklava is always great but their walnut, pistachio, and almond take is seriously exceptional.

More Of The Best Greek Restaurants In Sydney

Somewhat of a left-field entry, but what is the point of good food if it’s not accessible? Zeus Street has about 11 outlets across the Sydney region and is owned by the Greek-heritage directors of Crust Pizza and Pony Dining. It’s exactly what you want when looking for fresh, zesty lunch-time fillers and they specialise in delicious wraps and bowls. The Spartan bowls draw inspo from the diet of the legendary warriors and their Keto bowls are perfect for cutting out the carbs. It’s quick, easy, and satisfying.

For many of you, this iconic restaurant will already be your go-to Greek spot. Owner Peter Koutsopoulos is a legend in the Sydney Greek food scene, with over 35 years in the game and five restaurants under his belt. It’s the one-stop-shop for fancy post-work dining and long business lunches—but don’t let that stop you as Medusa is still very well priced and has something for everyone. The prawns sautéed in thick tomato sauce and served with charred pita are a major vibe.

Gyros definitely deserve an article on their own but if you’re looking for a quick bit of incredible Greek street food, Mega Gyros is your place. Much like their cousin the doner kebab, the gyros here are slow-cooked on a rotating spit and come in pork, chicken, or lamb (with the chicken being a firm fave). The meat is freshly cut into a warm pita with chips, tomato, onion, and tzatziki. It’s nothing fancy but it's damn good eating.

Slow-cooked meats turning over charcoal, handmade pitas, and quality local ingredients make Stix and Pita on Enmore Road a must-try. Owners Jim and Elvis put their heart and soul into recreating the food of their homeland and it shows. Even the chips come heaped with herbs and spices and feta or kefalograviera cheese. It’s restaurant-quality food at takeaway prices and will have you coming back again and again.

Nieo’s blends the hallowed Greek charcoal chicken shop and the American diner to create something more than the sum of its parts. Founders Theo Georgoulopoulos and Nick Xenofos are hospo veterans with years of experience working the rotisseries. It’s very much an upmarket takeaway but like, way, way upmarket. The big black-tiled and bare-lightbulb space they have in Earlwood fills up quickly as diners flock in for the supremely well-regarded half flat chicken. Seriously, it’s up there with the best in the city.

Koutouki is an old-school Greek taverna that highlights the best of the Greek dining experience. These guys are like a culinary embassy dealing exclusively in good times that will instantly transport you to memories of holidays past. The food is traditional, authentic Greek with tasty morsels like the lahanodolmades stuffed with spicy onions, beef mince, parsley, and dill, and the home-cooked veggie mousaka oozing with bechamel sauce. Friday night is the time to go as it’s a full-on celebration with live music until late.

Possibly the winner for the most hidden restaurant, Sophie’s is right on Darling Street above a hair salon. This tiny taverna is another lively affair showing off exactly how the Greek get down, with smashed plates lining the walls to prove it. Run by Greek husband and wife duo, they specialise in mezze platters, share plates, and slow-dining in a welcoming space where Sophie herself will often greet diners. Come for the slow-roasted lamb shoulder, stay for the hot doughnut balls in nutty honey syrup.

This place is the kind of low-key Greek joint you go to when the party is winding down. The ouzo flows until 2am on Fridays and Saturdays, making it the perfect nightcap after an Inner West session. A seriously underrated and genuinely hidden gem, STEKI Taverna hosts endless live music great for dancing off their BBQ octopus, lamb, or snapper. Everyone should visit at least once.