Slurp Your Way Through This List Of Sydney’s Best Ramen

No doubt about it: ramen is probably the most popular export from the land of the rising sun behind sushi, Pokémon and giant radioactive monsters. Like most things, it's usually better eaten at the source, but takeaway and home-delivered pots of noodles are also possible if that's your current vibe.

There's nothing better than warming up with a bowl of noodles. Here are 15 of Sydney's absolute best. 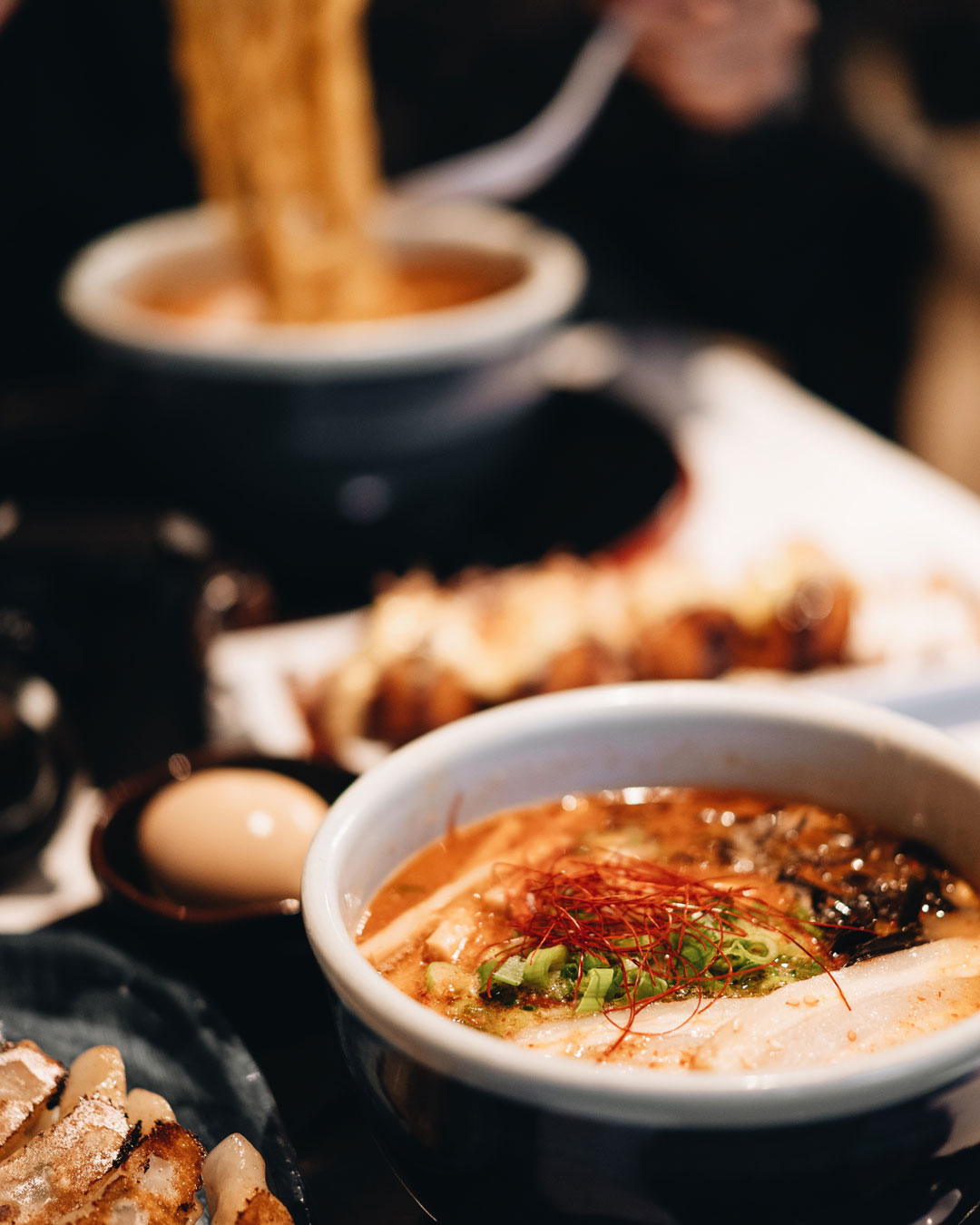 Manpuku is a local favourite and stand-out in the crowded Chatswood market. They opened their second location up here in 2016 after the success of their original venture in Kingsford. Chef Hideto Suzuki currently has a 15-strong range of dishes to choose from and they rotate options all the time so make sure to return frequently in case they disappear. The signature dish, "Number Seven", is made using a secret pork-and-chicken broth blend unlike anything else you’ll find in the Southern Hemisphere. Good thing the dishes are numbered too because the proper name of that one is 15 words long and good luck ordering it over the phone.

Ramen Goku is an unassuming place located in amongst the action at the south end of Glebe Point Road. Their huge portion sizes and the authentically flavoured broth has earned them a loyal following amongst those who know a thing or two about ramen. The broth is tailored to each dish and usually consists of a speciality blend of tonkotsu, salt, miso and soy.

The standouts here amongst the extensive menu are the classic Sapporo miso ramen in a pork and chicken soup, the black garlic ramen with caramelised garlic oil, and, of course, their signature Goku ramen, which is a supremely well-done, straight-up traditional bowl. That last one also comes in a double portion, which is wild considering a single is enough to lay you out for a week. You can get veggie ramen here on request too and it’s pretty good—although you’ll probably want to throw an egg in there for a bit of protein.

Ajisen Ramen means "world ramen" and this place is part of a chain that originated in Japan in 1968. It’s home to original tonkotsu ramen served with a thinner Kyushu noodle. For this price range, you can’t do much better than Ajisen. Their classic ramen is properly filling with an incredible depth of flavour, while the "volcano ramen" is pretty much what you would expect; a firey chilli broth bowl slathered in black "volcano sauce". For the plant-based people out there, all the non-meat dishes can be made vegetarian or vegan by choosing miso broth at checkout. Go for the vegetable ramen and chuck some fried silken tofu on there for good measure and don’t forget the egg as it’s packed with smokey flavour. If you order edamame, prepare to be munching on them for a long time after the meal as the portions are huge. 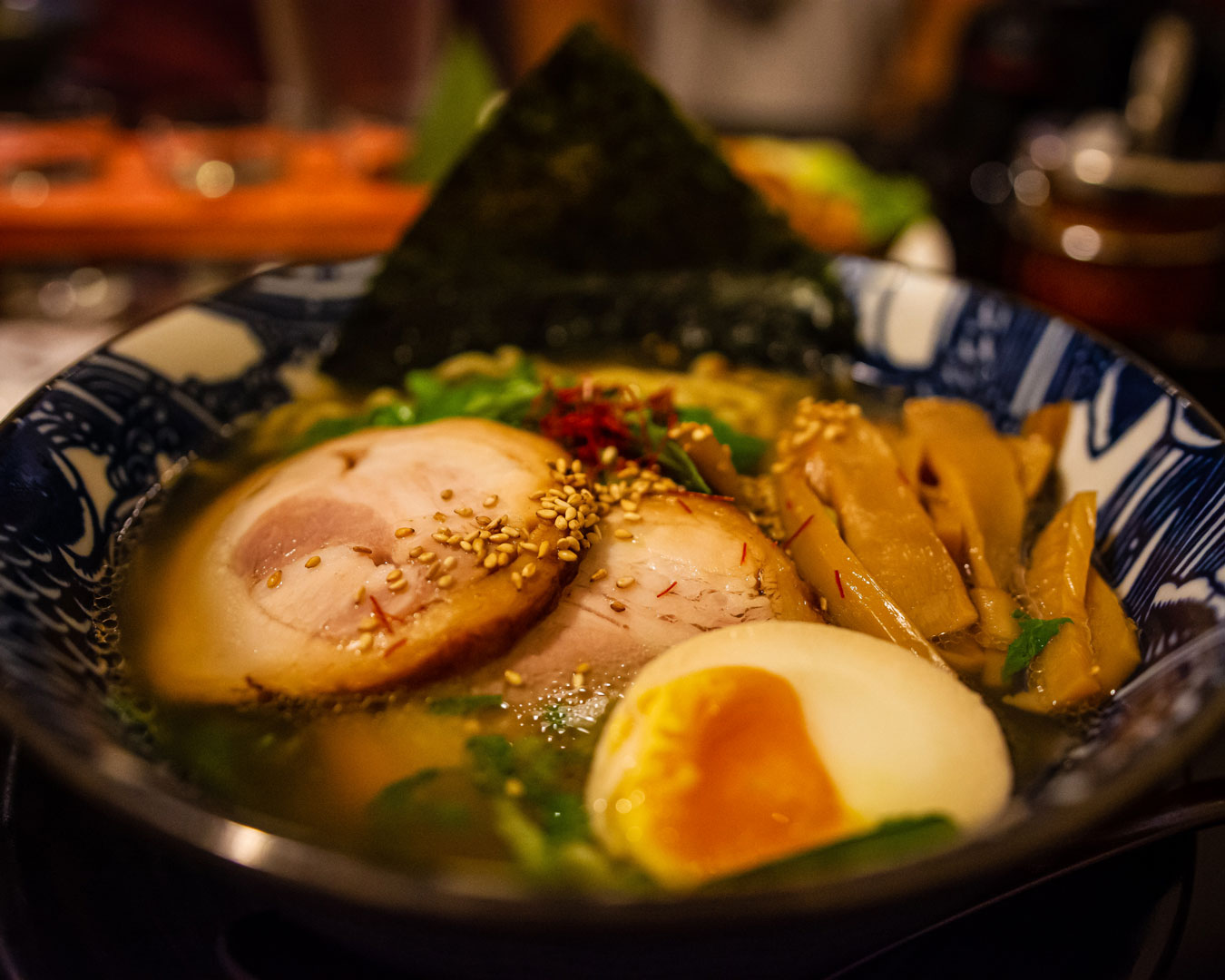 Yeng and Allan serve up four kinds of ramen away from the action of central Sydney; tonkotsu, spicy tonkotsu, miso, and prawn and chicken. Given that the best ramen is usually cooked up in the city, Kuroneko Ramen is a great choice for people down south. The spicy broth is rich in umami flavour which is built by the crispy seaweed garnish and loaded up with springy noodles. The side dishes here are worth splashing out on too. Grab some fresh avo sushi rolls and a side of tempura cheese which sounds odd but trust us, it delivers. Veggies should grab the udon kakiage which sits in a clear soup topped with crispy vegetable tempura.

Bon Japanese is run by husband and wife duo Miki and Takumi. All dishes are cooked fresh from the time you place your order so there may be a little bit of a wait but if you’re in the area, it’s totally worth it. At the minute, the revised menu only offers tonkotsu ramen for two, which comes uncooked but with a little boiling water and a bit of home cheffing, you’ll be slurping away in no time. Grab some pork or prawn gyoza as well if you need something to snack on while the kettle boils. Only a few veggie options here but the vegetable yakisoba is delightful.

Ask any real ramen aficionado for their top ramen spots in the city and Gumshara will usually take the top spot. This place is legendary for its broth which is so thick and heavily textured that they actually have a sign up offering to water it down if it’s too much. The flavour can, unfortunately, be a little lacking so we recommend spicing it up with a chilli bomb for an extra 2 bucks. Add that and you may just have the cities best ramen. For a tiny, hole-in-the-wall restaurant tucked away in a Haymarket food court, Gumshara has amassed a serious following that any ramen newcomer would do well to get involved with. Vegetarians will have to look elsewhere, however.

Ramen Zundo is dedicated to the cause of getting good ramen into your belly. They have recently constructed a limited takeaway menu with different treats on offer in small quantities to try and tide themselves over while they figure things out. The ramen here is freshly made every day from an 8-hour pork bone simmer. It’s packed with collagen and rich in texture and flavour. Right now they’re doing $8 ramen burgers and giving away free t-shirts when they hit 50 in a day so get ordering and make your pets/housemates/isolation friends jealous.

This is another key spot on the ramen map that has to be sipped to be believed. Hakata Maru specialises in Hakata ramen which consists of silky tonkotsu broth, extra thin noodles, and minimal toppings to allow the simple ingredients to do the talking. They do shoyu, tonkotsu, and miso tonkotsu which are relatively cheap and allow you to stack on the extras should you wish. It’s simple, no-fuss food and the team here really pay attention to detail. They even have their logo printed onto the sheets of nori that garnish their dishes. 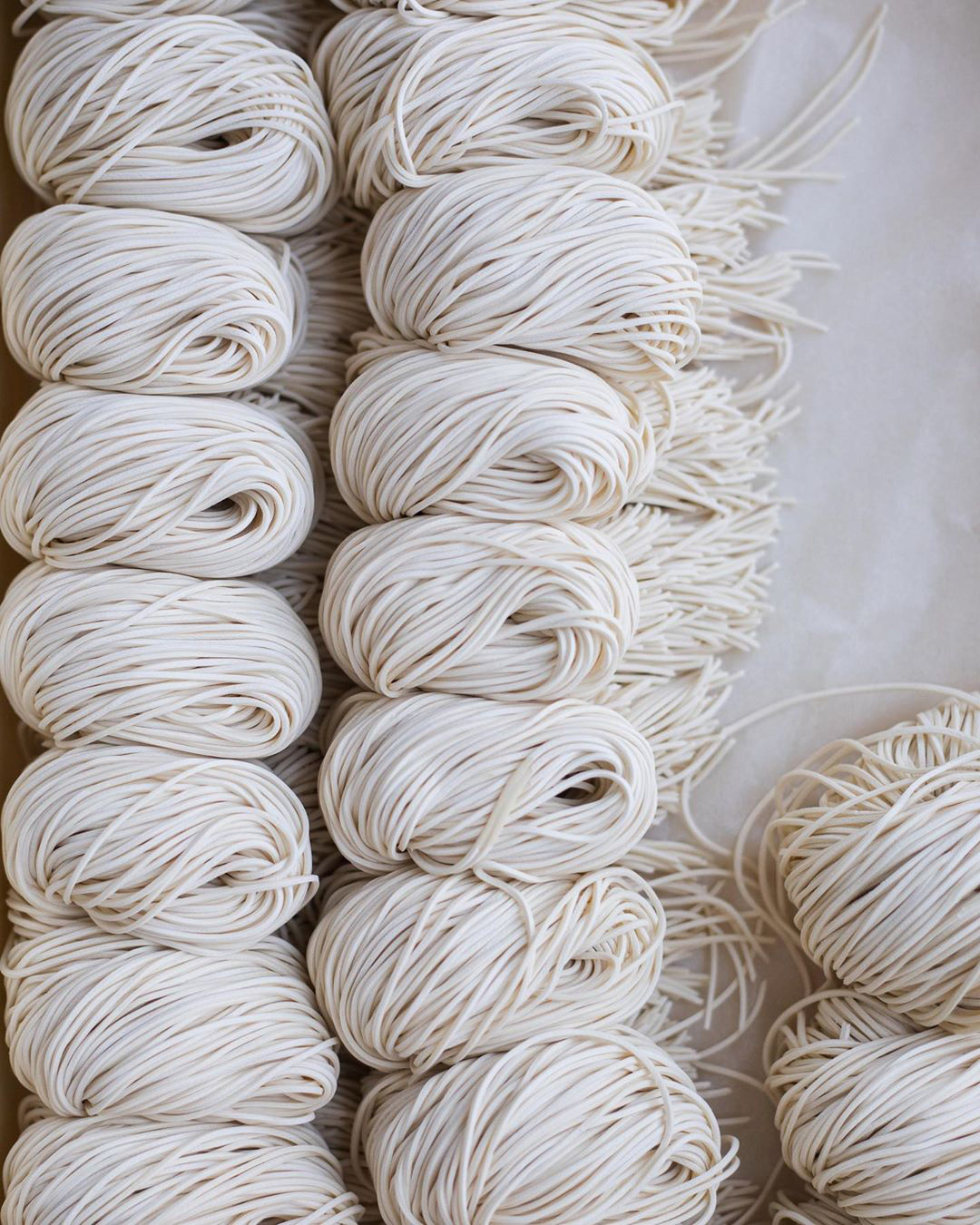 RaRa Ramen is a little oasis in a sea of pork broth for vegans and veggies who still want a slurp of the soupy action. Their soy-based miso tonkotsu broth is simmered in a pressured cooker and packed with the creamy goodness that most other meat-free options lack. But this doesn’t make them lightweights in the carnivorous section. Their pork tonkotsu is the stuff of legend and frequently has patrons blocking up the pavement at their Redfern and Randwick joints just to get a taste.

Their new vegan-only venture, Lonely Mouth, serves up hot noods in either a sunflower-and-hempseed broth or a spicy Szechuan soup topped with nuggets of seitan. They also offer the classic vegan miso made famous at RaRa here too. At this stage, Lonely Mouth is pick up only.

Yasaka Ramen is now into its sixth year of serving up the noodly goodness. Their shop front is normally lit up with a neon sign which reads "no ramen, no life", a message we can fully get behind. They offer four tonkotsu-based broths which are super thick and have just added a light chicken and fish soup to the mix to balance things out. The charred pork here is given an extra crispy layer with a blowtorch which really takes it up a notch, while the extra-fatty pork rib is definitely worth splashing out on if you need something more substantial to chew. They also do a great miso-based veggie ramen with crispy tofu and crunchy corn which you don’t often get elsewhere—and that's a damn shame because it really works.

You wouldn’t expect a working motorbike shop to serve up some of the best ramen in the area but, well, we are in Newtown where that combination actually makes total sense. The team at Rising Sun are always friendly and have recently pivoted the whole operation to takeaway and delivery. From now on, staff will be delivering hot favourites like the black fungus loaded vegan Monk ramen and the hang-over killing Breakfast ramen straight to your door on their own sweet-ass steel horses. They’ve also developed frozen dishes you can whip up in a minute from the safety of your isolation chamber.

The team at Ichiban Boshi first opened their doors in Bondi Junction in 1998 back when people had barely even heard of ramen. They’re pioneers of the Japanese food scene and made a bit of a splash by selling fresh, handmade ramen and gyoza to the Eastern Suburbs. They still take their craft incredibly seriously, to the point of only making 30 bowls of their signature tonkotsu per day, and people generally queue around the block for it. If you are around the eastern beaches, grab a bowl of their ninniku ramen which is loaded up with garlic and soy sauce for a firey immune-boosting kick. 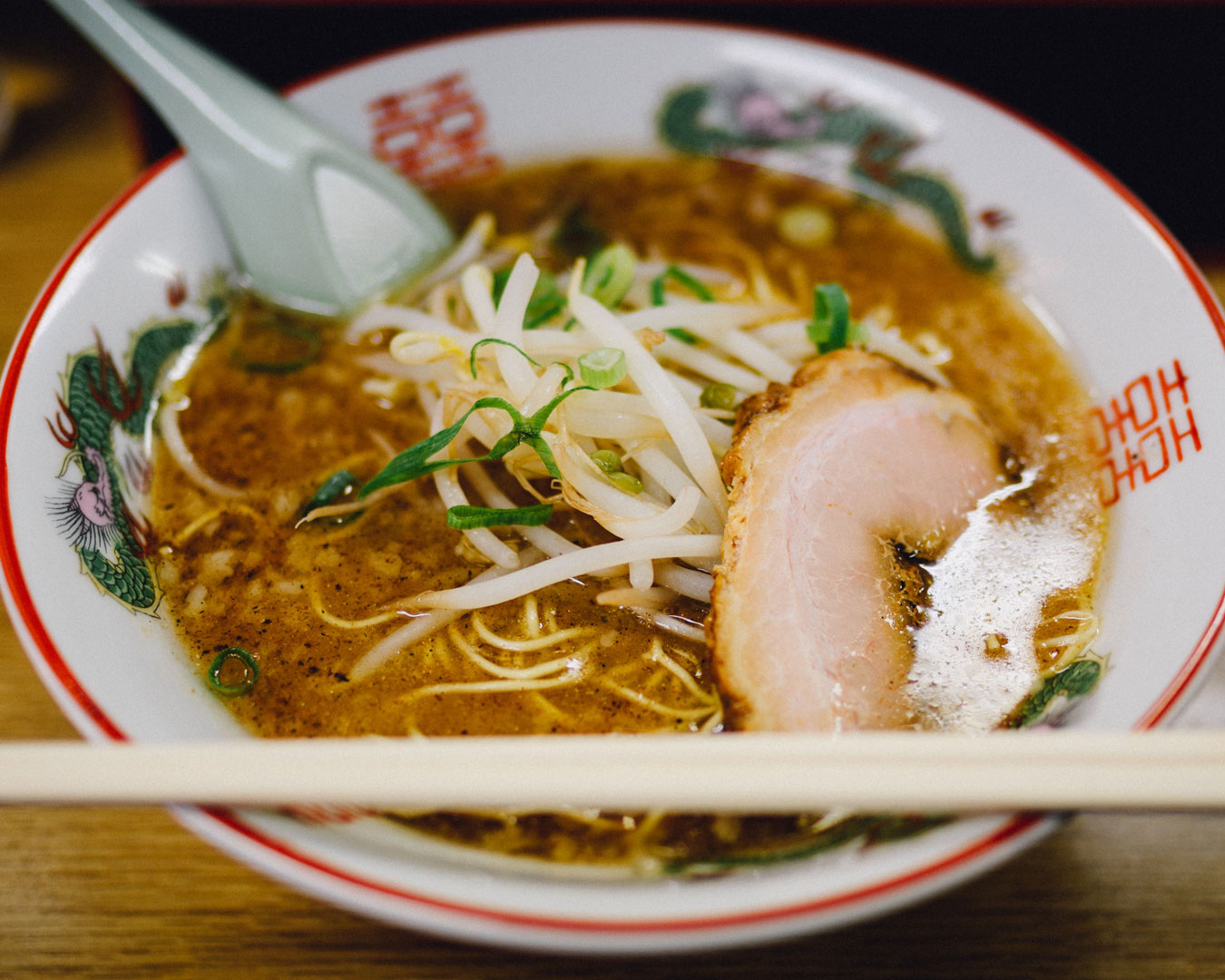 Chef Ryosuki was born in Fukuoka, Japan, the birthplace of tonkotsu ramen which, given the number of times we’ve mentioned it, it seems fair to say that Sydney has a bit of an obsession. Ryo is another pioneer in this fair city and has been doing it for close to 20 years in North Sydney. It's a cash-only, no bookings kind of place with limited—if any—veggie options but what you do get is some of the best damn ramen you can find. Tonkotsu broth, grilled pork slices, egg, spring onions, and, of course, perfectly firm noodles. Although the Bondi store has temporarily closed, they have started doing takeaway which means you won’t have to fight so hard to get a taste.

Chaco Ramen in Darlinghurst is a tiny ramen-ya down the quiet end of Crown Street with a big reputation. Unfortunately, its Potts Point yakitori spot has temporarily stopped trading but Darlinghurst and Surry Hills residents can still walk over to the original Chaco and get their ramen fix or you can call and have your broth delivered if you live nearby. The ramen comes in three styles: fat soy, chilli coriander pork, or tomato tantan for the veggies. The pork broth here is shoyu but the added pork fat gives it a tonkotsu-like consistency which is supremely buttery. They’ll even box it all up so you can prepare it at home for when you’re ready to eat too!

Finally, we arrive at Matsusaka Backstreet. This is the type of place you’d probably walk straight past if you weren’t actively looking for it but now we’ve told you, you won’t miss out for much longer. They’ve pared down their menu to accommodate the crisis but will still deliver you their wonderful tonkotsu with an understated broth that won’t dry your mouth out. The only vegetarian option is the veggie ramen that comes loaded up with crunchy stewed cabbage and a handful of green and orange scattered on top. Take your isolation game to the next level by settling in with a few bowls of the good stuff from Matsusaka. You won’t regret it.

Need some beverages to go with your bowl of noods? Head over here for Sydney's best booze delivery.