Where To Find 15 Of The Absolute Best Breakfasts In Brisbane

Breakfast in Brisbane is almost a cultural movement. On almost every street corner is somewhere you can get coffee and a decent feed—we've almost too many cafes to choose from. To settle for a substandard start to your day is bordering on the criminal, so instead of settling for burnt toast or microwaved porridge, launch yourself headlong into post-dawn endeavours that won't leave you disappointed.

From north to south, east to west, these are Brisbane's best breakfast haunts. Did we miss your favourite? Calm down, maybe they’re on our list of Brisbane’s best brunches.

Sure it might be a tight squeeze, and you might have to wait a while for a table, but damn if Little Loco’s breakfast menu doesn’t make our hearts beat a little faster every time. They’ve been around awhile but definitely haven’t dropped off in the creativity department—their bacon and egg bao are proof of that.

They’ll take care of you in the morning and well into the afternoon. A typical brunch date at Morning After usually includes their iconic breakfast carbonara (pasta for brunch is always a good time, trust us) and a fancy-ass MaMuffin from the all-day menu, and maybe some late-morning calamari to get you into the lunch mood. A must-do for any bruncher worth their pink Himalayan mountain salt

Woollongabba fave, Pawpaw knows a thing or two about putting on a killer breakfast in a stylish space. Our go-to dishes include the croissant eggs benedict, piling bacon and hollandaise sauce on a flaky croissant, or whatever insane variation of pancakes they’ve cooked up for the season—this time it’s charcoal pancakes with raspberry curd and white chocolate ice cream.

Nundah favourite, Blockhouse has a moreish and creative breakfast menu that’s all over the shop in the best possible way. Fried chicken and corn waffles. Okonomiyaki waffles with maple bacon steak. Avocado on toast with popcorn chicken. We could go on. Best of all, the Blockhouse brunch menu runs allll day.

Tucked away on the southside, Little Clive has the kind of decadent and well-turned-out breakfast menu that makes for life-long customers. One scroll of their Instagram feed and you’ll be group messaging the crew for a brunch date—and their regular waffle specials will have you coming back again and again. If you can go past their customisable eggs benedict, that is. 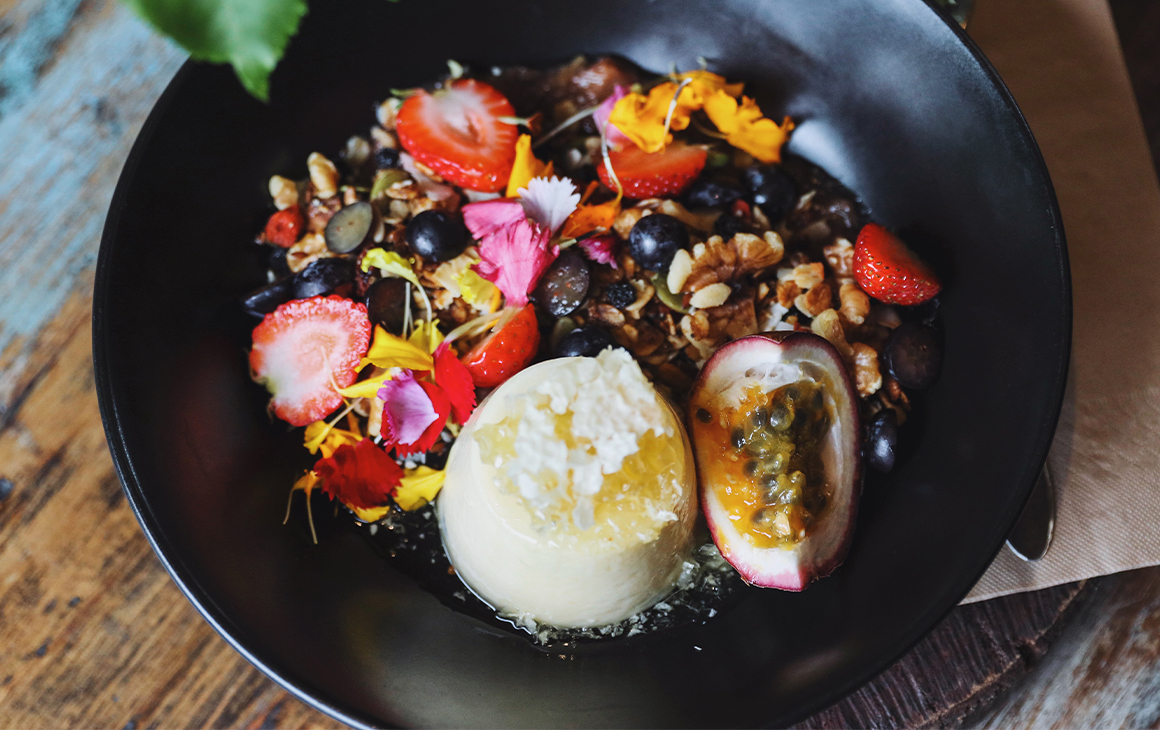 Managing to give off serious country barn vibes despite being located in a quiet suburban street in Kedron, Farmhouse usually has a line snaking down the street on Sunday mornings—but if you can hang in there, it’s worth the wait. Maintain your position and be rewarded with breakfast gnocchi in chilli sauce with thick-cut bacon, parmesan and free-range poached egg or Belgian waffles with dark chocolate fudge.

Just off James Street in Fortitude Valley, King Arthur is one of those classic cafes you just can't help but keep coming back to. As well as some of the most delicious and hearty feeds for breakfast, you’ll also find a plethora of housemade cakes and sweet pastries, with jars of fermenting veggies stacked up on the shelves ready for plating.

Get the ‘gram ready because Miss Bliss Wholefoods Kitchen has some of the prettiest dishes and digs going around. Located in West End, step into this tropical oasis and fill your fork with fine nourishing fare. They’ve got everything from French toast and sweet potato hash to peanut butter acai bowls. It’s pure perfection, not to mention incredibly wholesome, with almost the whole menu gluten and dairy-free.

One quick scroll through Smoked Paprika’s Instagram feed and you’ll be drooling excessively, already planning your visit for their next weekly special. Last week it was a mac ‘n’ cheese scotch egg, next week, who knows? Their regular menu is pretty damn tasty too, and with their portion sizes you’ll be full until dinner.

With a creative new special coming out of their kitchen every week, there is always a new excuse to head back to this laneway cafe. The New Black's usual menu features plenty of familiar favorites, including an epic eggs benny creation and though small, their laneway seating is a Sunday morning vibe. 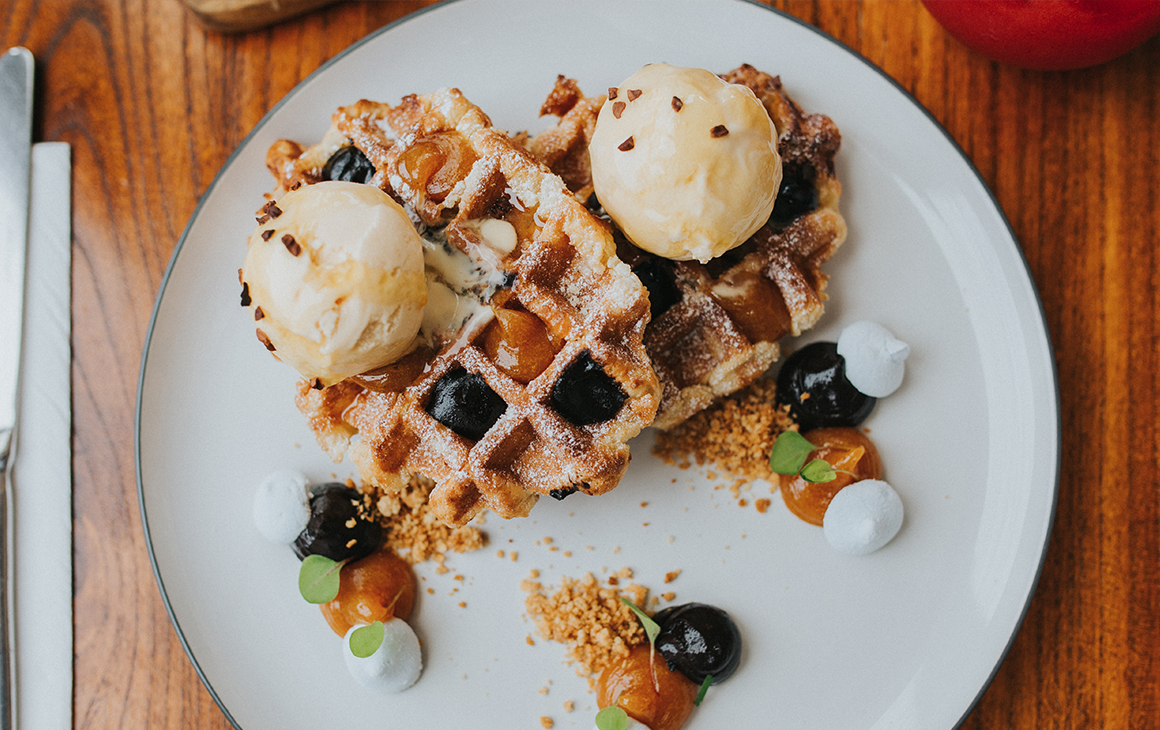 Naïm has earned quite the reputation for their beautifully plated, Middle Eastern-inspired breakfast menu featuring dishes like baklava waffles, brekkie pita and falafel benedict. If you're a sufferer of meal envy opt for the shakshuka (baked eggs) with toasted challah bread and tuck in safe in the knowledge that you’ve ordered one of the best dishes on offer.

Take a trip to Botero on Creek Street for exceptional coffee and fantastic breaky options. If you’re dashing in before work, their coffee is some of the best in town, but catching an earlier bus so you can tuck into crumpets with smoked salmon and poached eggs or their amazing maple bacon French toast is always a good idea. Even their version of avo toast is suitably extra with pumpkin, feta and house dukkah.

We’re big fans of unique, quirky brekkies, and no one does quirky quite like Billykart. They take the humble baked beans and amp it up with Kransky sausage, hash browns and red cabbage kimchi, and turn porridge into a work of art with buckwheat, cocoa, cardamom, cinnamon, maple poached pear and granola.

Now before you go trying to tell us that Pablo shut their doors years ago, stop, because the rumours are true—Pablo is back, and they’ve brought their smashed peas with them. Pablo 2.0 isn’t even far from the original, and you’ll find a line up of brunch eats worth falling in love with all over again on their new menu. But let’s be real—you know you’re going to get the peas.

Take every one of your favourite breakfast dishes and give it an epically tasty twist—that’s pretty much the menu at Chapter IV. Housed in an old Queenslander complete with a verandah that offers up some pretty epic views of the city, Chapter IV dishes up hearty versions of French toast, fritters, waffles, hash cakes and eggs benny, with a healthy green buddha bowl thrown in for good measure.

Finished your Brisbane breakfast and ready for lunch? Check out the best spots for a long lunch here.