Clearly, Sydney has countless dining options to suit every taste—from humble pub grub and cheap eats, to cutting-edge cuisine and world-class fine dining. But sometimes, you know you’re hungry, but you don’t know exactly what you want. Luckily, Sydney has your back, with some comprehensive dining precincts that'll guarantee you’ll find something to tick all your boxes.

Lately, as Sydney morphs under a whirlwind of futuristic developments and far-flung expansions, dining precincts are on the up too. These days, our dining precincts have moved well beyond their food court origins, harbouring some of the city's best new venues. From all-day diners to secret omakase restaurants, bubble tea havens, and a famous zero waste bar—keep reading for Sydney's tastiest dining precincts.

It may currently be in the process of being built, but given its location and scale, EDDY promises to be one of the go-to foodie destinations in Sydney. Situated in Eddy Avenue and Eddy Avenue Plaza, adjacent to Central station, this new experience forms part of an ambitious state government precinct renewal program. 24 hectares of land are being redeveloped, driving growth and stimulating the economy, and EDDY will be the hub of it all. As well as a wealth of dining options, EDDY will contain retail and cultural spaces, combining to create a vibrant community experience. Watch this space.

EDDY is slated to open soon—stay up to date here. 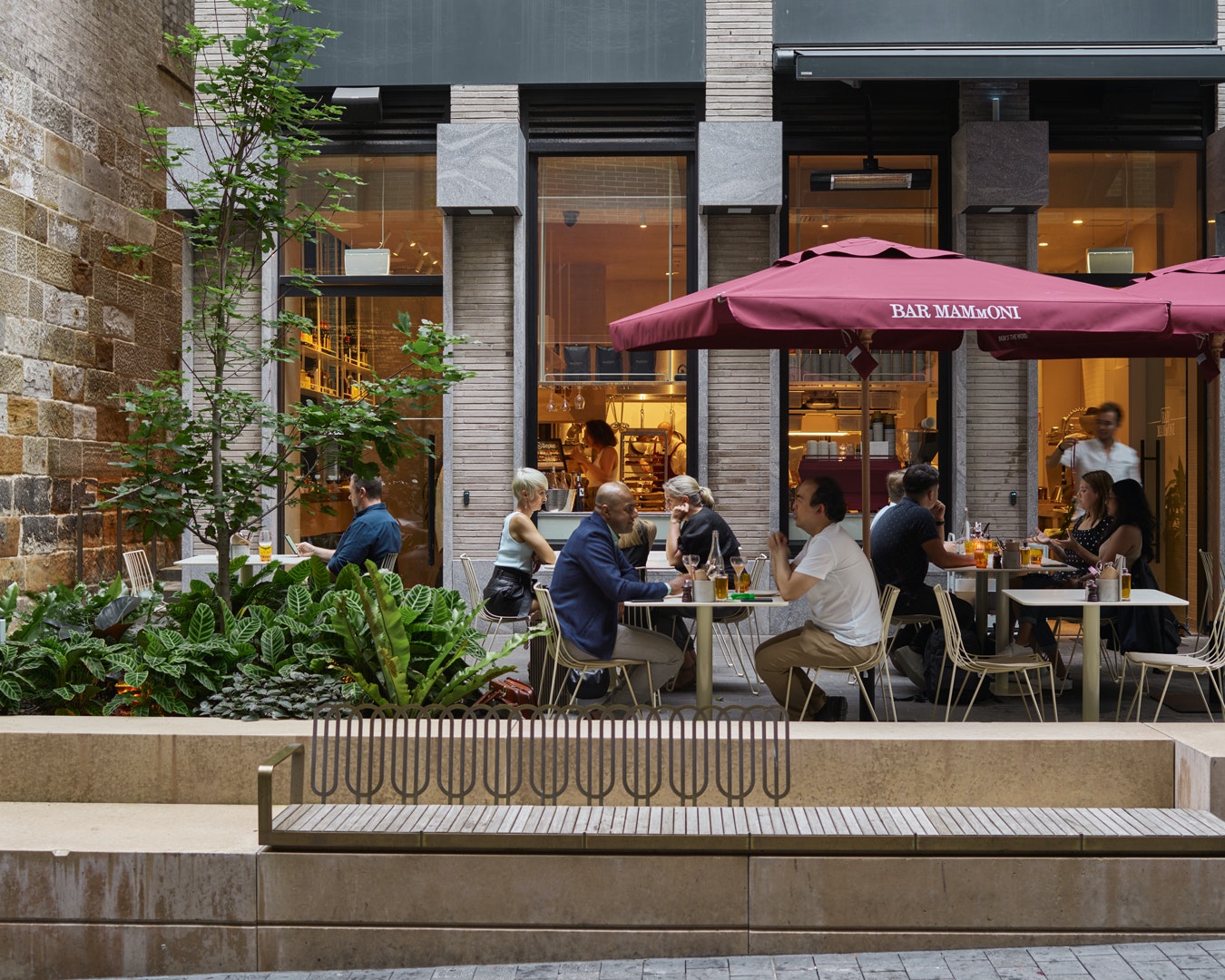 Fusing the best of the CBD’s hustle-and-bustle with the independent spirit of laneway dining, the recently opened Quay Quarter has turned Circular Quay into a food lover's destination in its own right. Obviously, you’re just a short hop away from some of the country’s most iconic landmarks but if you’re feeling hunger pangs, you'll find two omakase-style restaurants, a Parisian-style steak house, and Sydney's best Negroni. 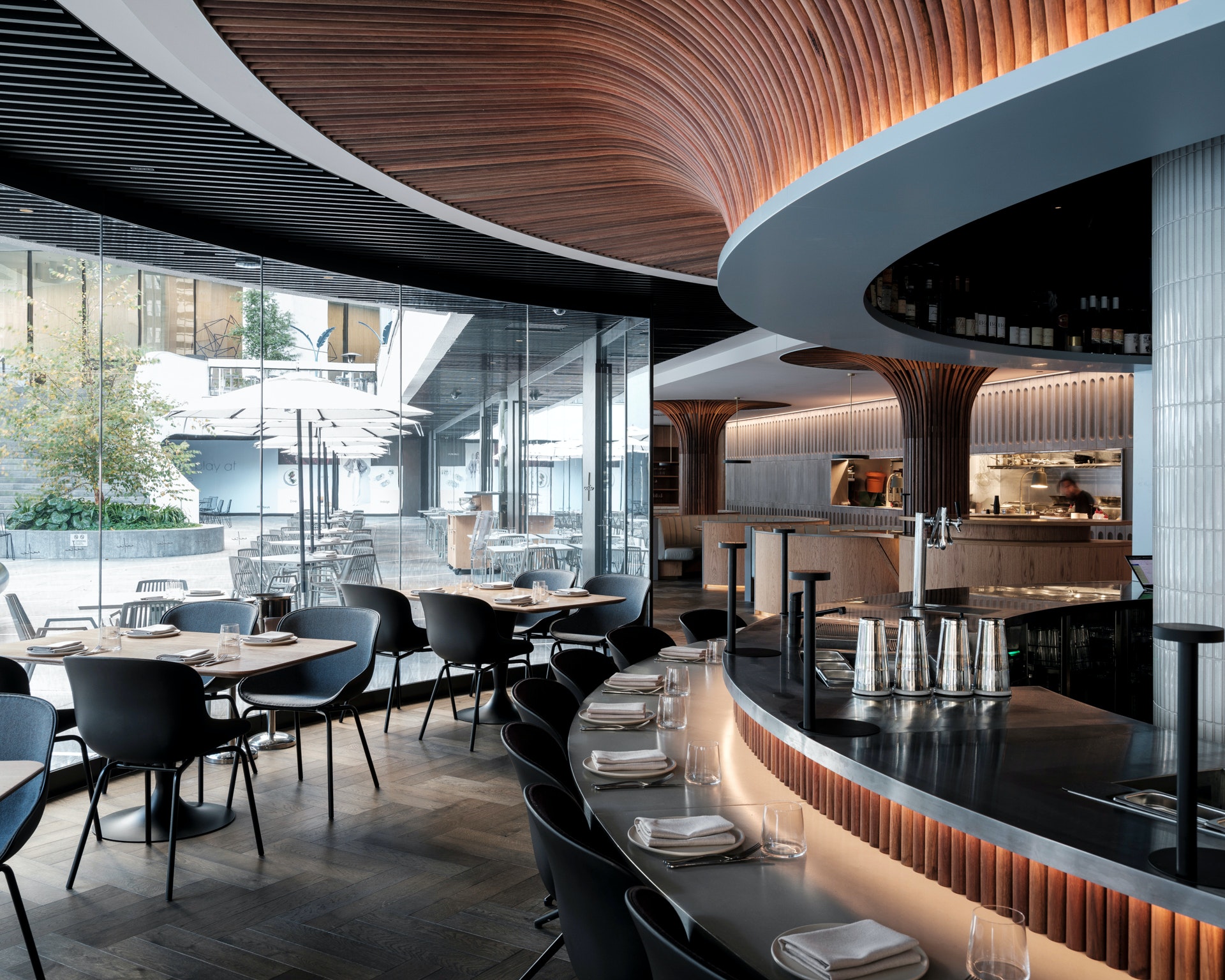 The recently-completed development at 25 Martin Place is a cut above your standard Sydney food court. There are office lunch favourites like Pasta Pantry and Schnitz, true, but it’s the selection of upscale restaurants that renders this precinct a cut above. The precinct is part of a $170m redevelopment, fine dining fans can experience KAZAN, a Japanese restaurant above the Theatre Royal, or AALIA, an eatery with a mission to resurrect long-forgotten Middle Eastern offerings such as waraq simsim (a Lebanese stuffed vine dish) with aged rice and sea urchin. 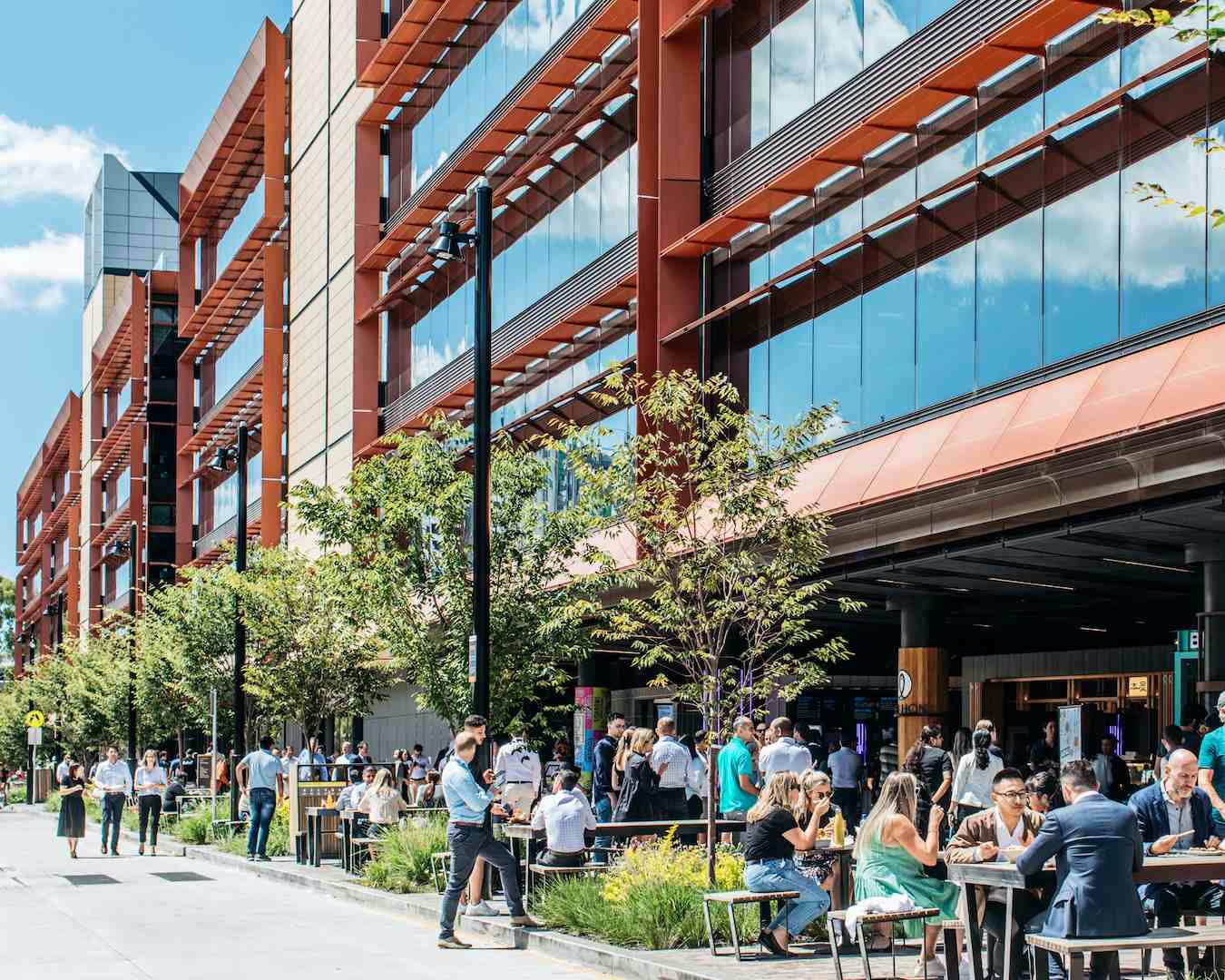 Originally the site of Australia’s national railway workshops, the South Eveleigh precinct—conveniently located near Redfern Station—has been slowly evolving over the past few years into a one-stop shop for work, shopping, wellness, and top-tier dining and drinking. Popular chains like Fishbowl, North Sandwich & Burger, and Charlotte’s Little Sister sit alongside places like RE—a bar built on an ethos of sustainability and recycling whose menu features such gems as a duck fat potato scallop with caviar and an old-fashioned featuring wagyu fat. South Eveleigh is also home to The Grounds' insane new ballroom venue.

Must try: RE, Lucky Kwong 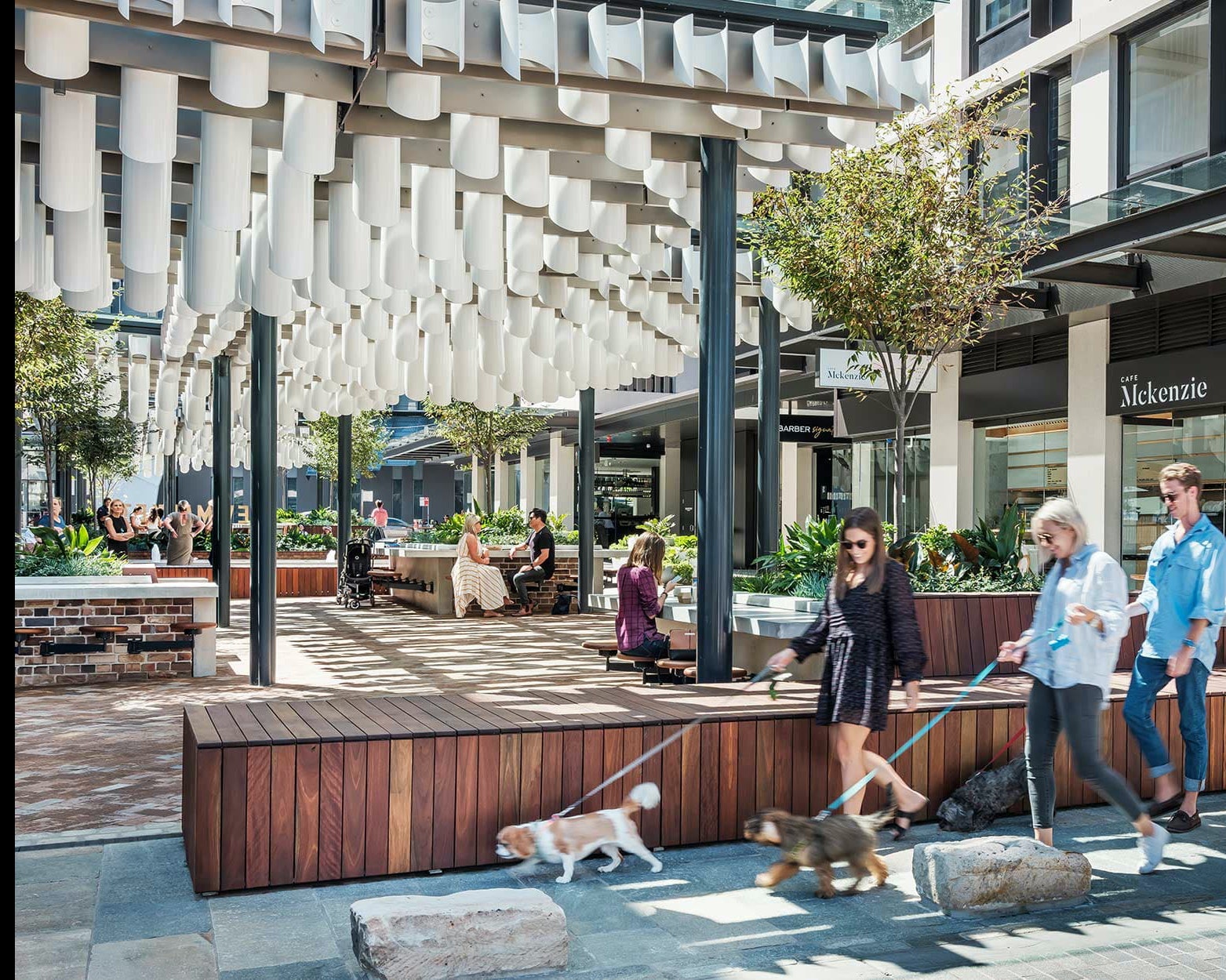 When a website has a section labelled "masterplan", you know they mean business. That’s certainly the case with the developers behind Newmarket—a neighbourhood of residential buildings, green space, retail, and dining that’s only a five-minute drive to Coogee Beach. Newmarket Dining has brought some of Sydney’s favourite boutique eateries out to Randwick, so you can enjoy restaurants like Dumplings and Beer (originally in Potts Point), Baccomatto Osteria (first located in Surry Hills), and Ribs & Burgers (as seen, well, everywhere). And that’s just the beginning, with the promise of even more retailers and food emporia to come. 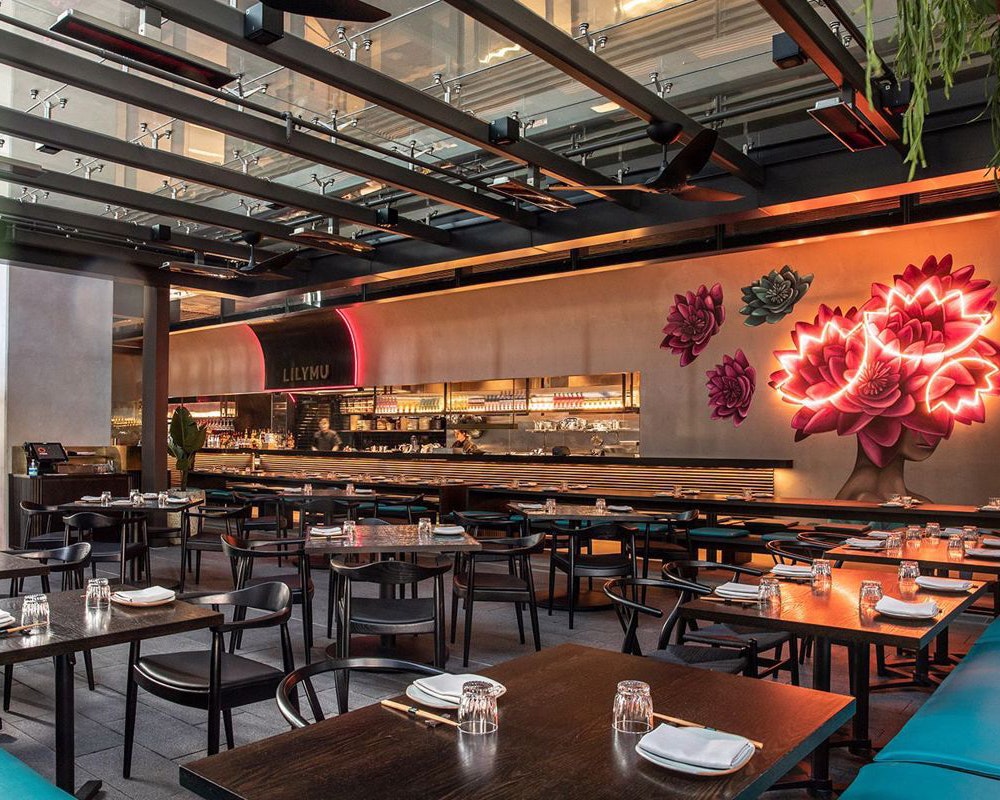 We’ve long been told that Parramatta is the second CBD and, with Parramatta Square, there’s the vision to create a city within that second city. Surrounded by tower blocks of office and retail space, giving it that financial hub vibe, Parramatta Square has the offerings to cure your hangry feelings, whatever your reason for visiting. Among the shops, you’ll find restaurants like Ruse Bar & Brasserie and the pan-Asian cuisine of LILYMU, plus more casual fare like Betty’s Burgers. Connectivity and information are crucial at Parramatta Square, too—WiFi is free throughout, and the precinct even has its own app. 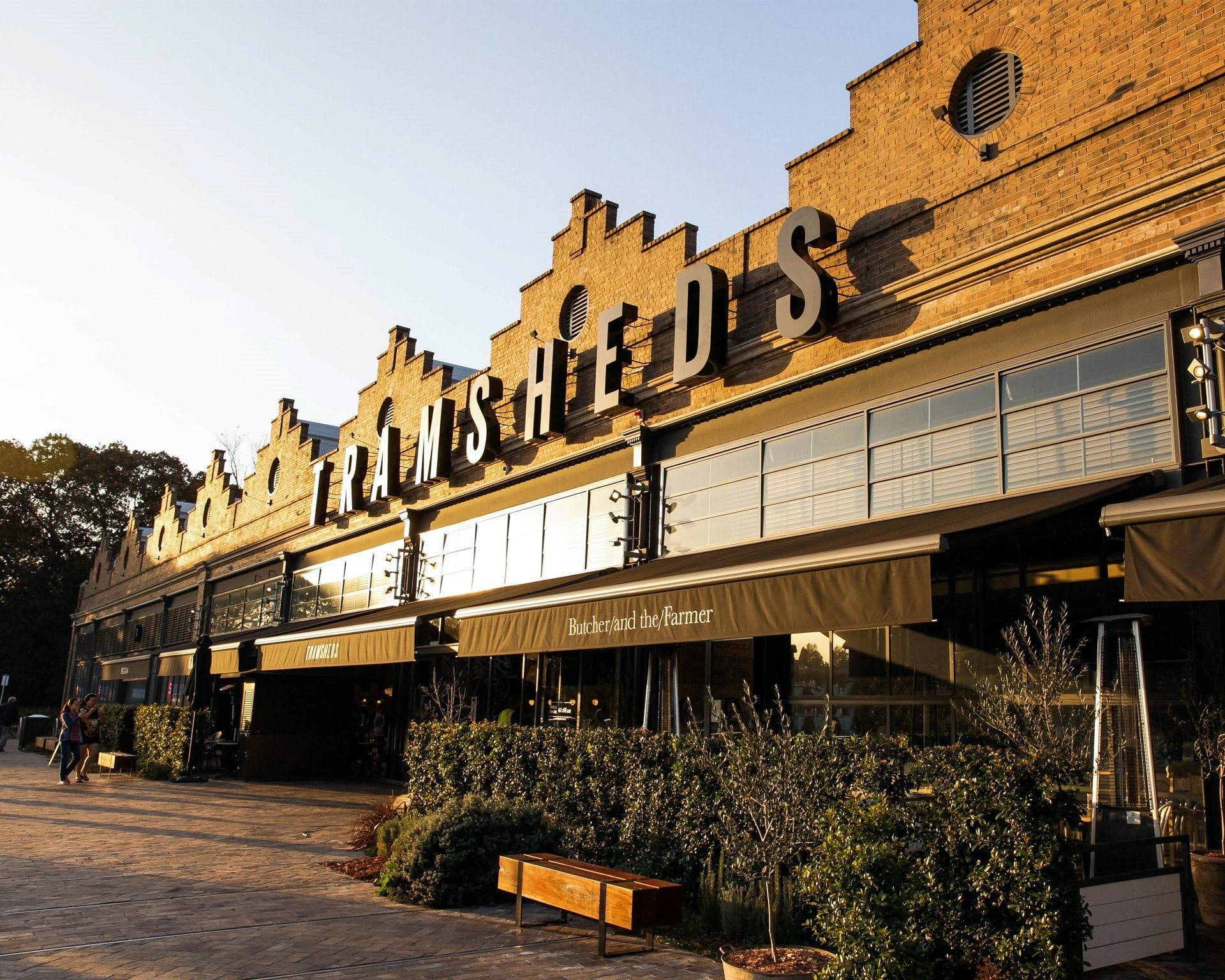 This inner west institution used to hold over 200 trams but is now one of the best-loved dining precincts in the city. As well as its seven retail stores, there are eleven restaurants including Flour Eggs Water—the pasta restaurant whose menu is built on a solid foundation of top-quality fresh ingredients. If Italian’s not your thing, you can try a Mexican cantina (Bodega 1904), a French bistro (Garçon), a restaurant dedicated to meatballs (Palle), or some sustainable seafood (Fish & Co). And, of course, you can—and, arguably, should—always end your trip with a scoop or two from Messina. On Sundays, Tramsheds hosts one of Sydney's best growers markets. 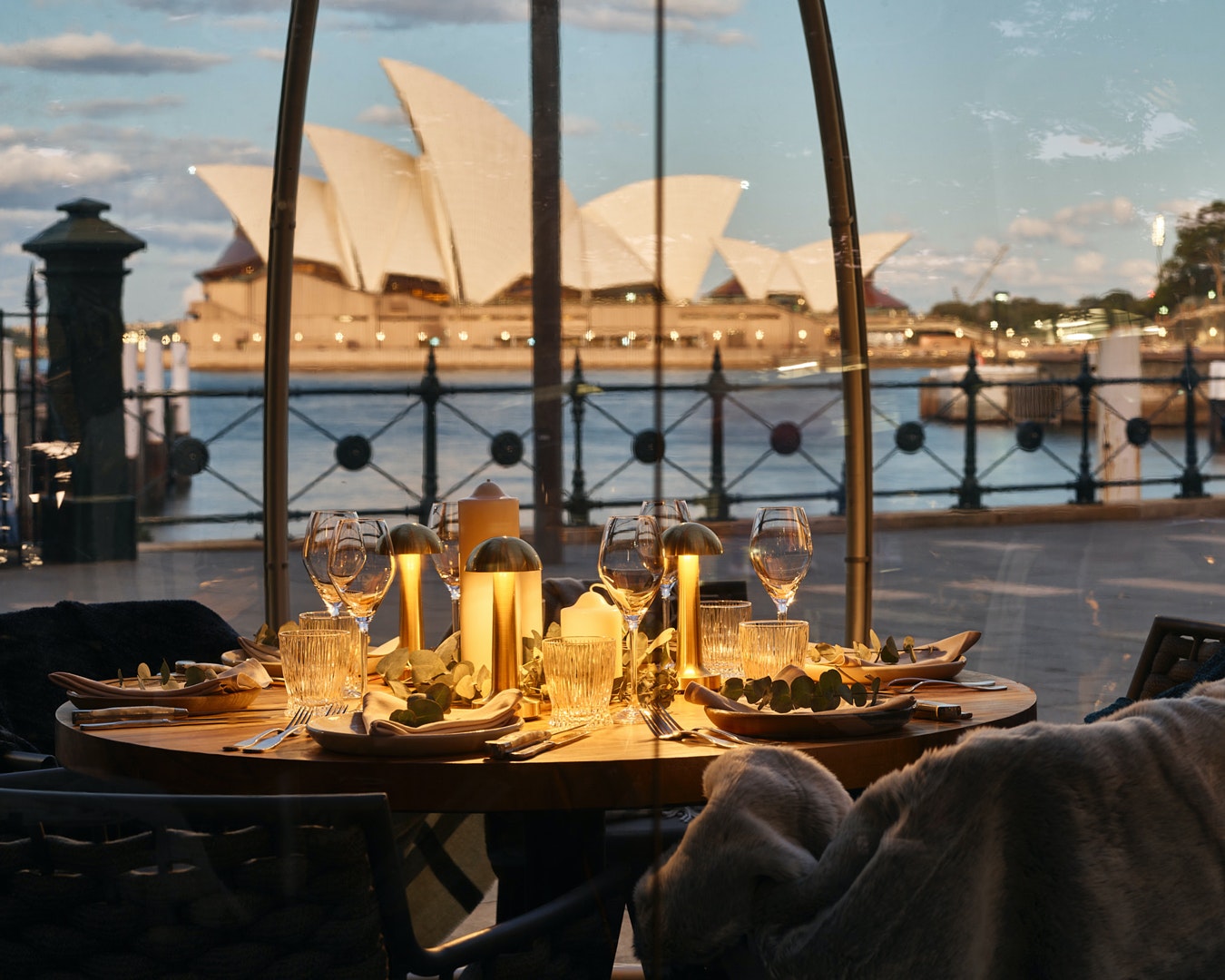 You’ll definitely know Campbell’s Stores, even if you think you don’t. Nestled between The Park Hyatt Hotel and the Overseas Passenger Ferry Terminal on the western side of Circular Quay, the quaint, recently refurbished heritage Campbell’s Stores offers uninterrupted picturesque views of the Sydney Opera House from the other side of the water. Unsurprisingly, the dining options here are all second-to-none: the breezy Harbourfront Seafood Restaurant, the distinctive Bay Nine Omakase and sustainable steak restaurant 6Head, to name but three. The latest to open is the luxe Asian-fusion restaurant, Luna Lu. If you’re really looking to splash the cash, you can even rent Campbell’s Stores as a wedding reception venue. 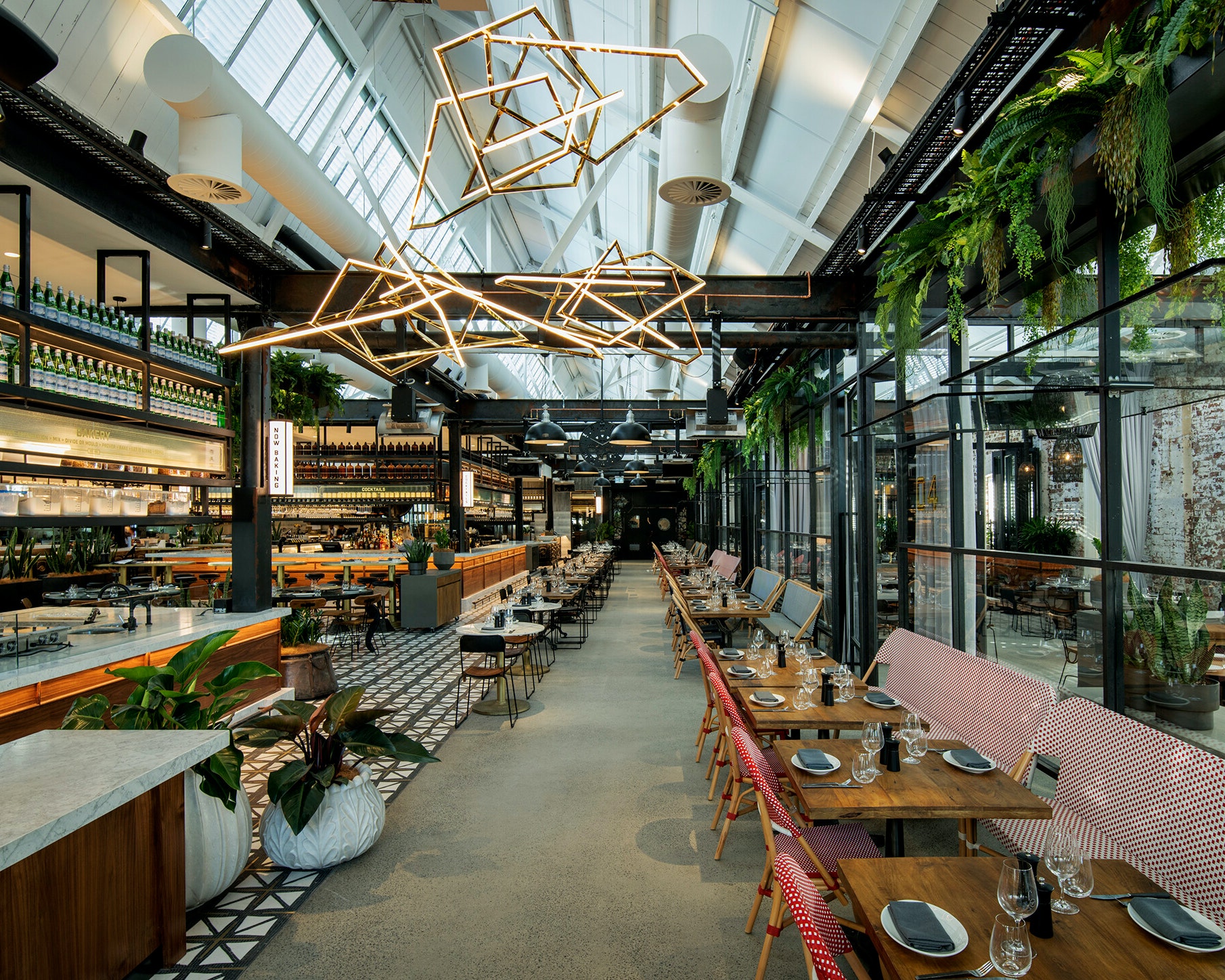 Located in a repurposed 19th-century heritage mill building and having opened in only winter 2019, The Paper Mill has quickly become renowned as one of Western Sydney’s top locations for great dining. Situated on the banks of the Georges River, there are four food options to choose from but when they’re this good, you don’t need more. First up there’s Firepit with its locally sourced meat and seafood cooked over an open flame. Then, it’s Georgie’s: a Neapolitan pizzeria with a well-stocked bar. Charcoal Joe’s follows, featuring everything you could want from a Lebanese charcoal chicken joint. Finally, it’s Shepherd’s Lane: a cafe that also proudly claims the moniker of “dessert bar.” 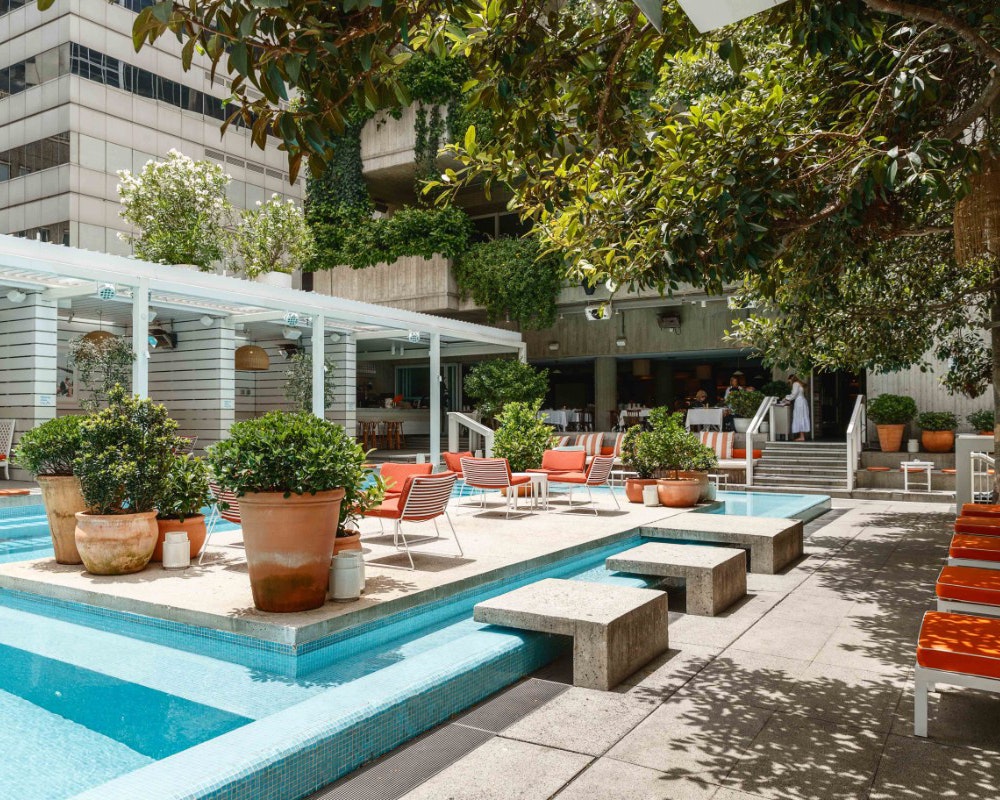 Is it a CBD pub? Is it a patisserie? Is it a rooftop nightclub with a swimming pool? It turns out that the Ivy dining precinct, located on the CBD’s George Street, is all of these and then some, with the Merivale favourite stretching further than you may imagine. It encompasses the always-packed Royal George, the bread-and-burrata heaven of Bar Totti’s, the always-hits-just-right Jimmy’s Falafel, Dan Hong's newly opened MuMu, and, of course, the iconic Ivy Pool—an oasis of calm in the very centre of Australia’s biggest city. There’s a reason why Merivale venues have taken over Sydney—they understand what people want and they damn well serve it to them. 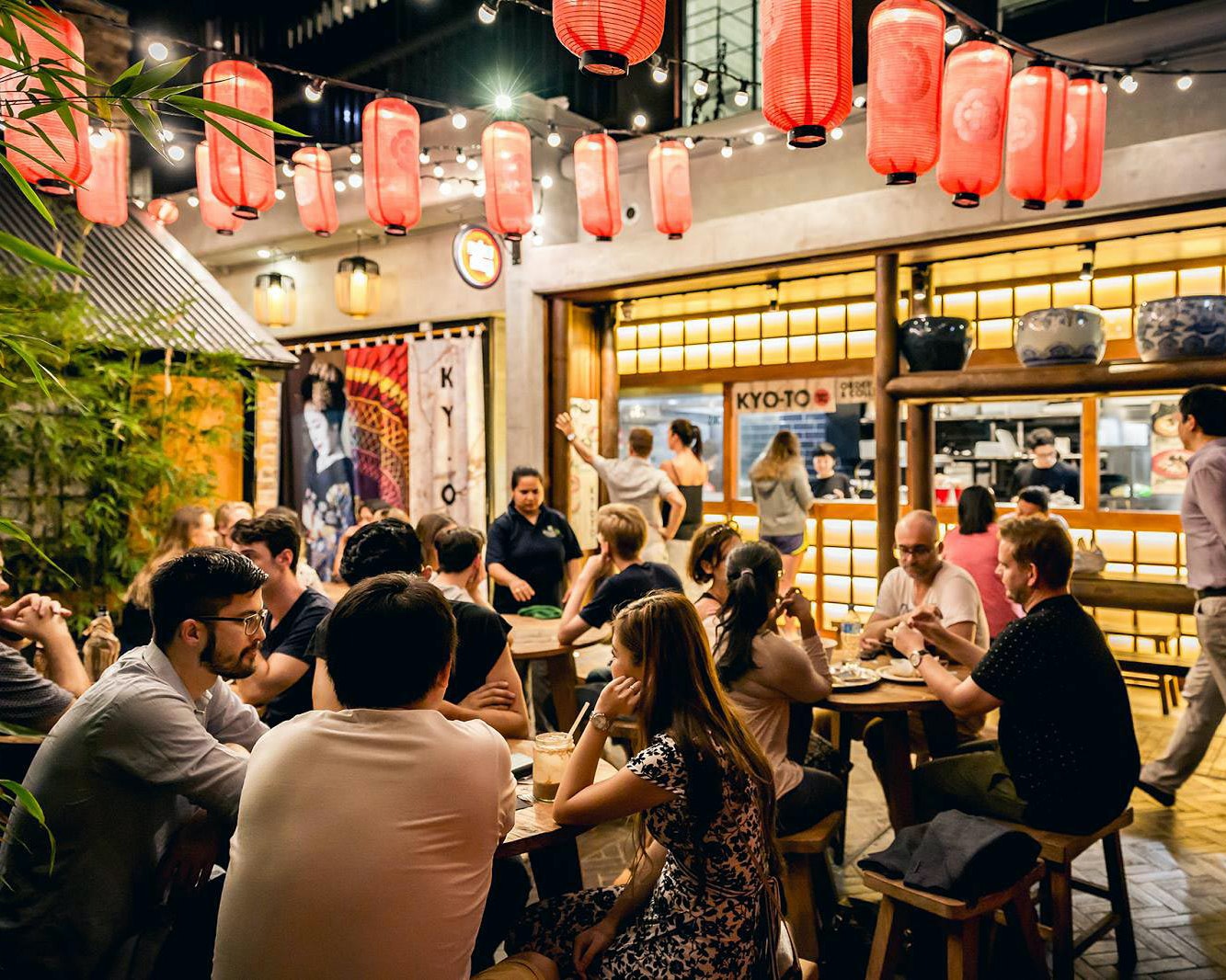 Most precincts concentrate on just getting the food right, but Chippendale’s Kensington Street is also an art and community hub. As far as dining precincts in Sydney, Kensignton Street really set the standard for what has followed since. The Eastside—one of Kensington Street’s four distinct areas—contains a gallery alongside such establishments as Southeast Asian fusion restaurant Mekong and contemporary Korean eatery Jung Sung. That’s before we’ve even considered the trattoria in the Westside, the pop-up Private Kitchen in The Old Rum Store, and, Kensington Street’s most famous region, Spice Alley. Bustling below a sky filled with yellow lanterns, you’d be forgiven for thinking you were in a street food haven in Asia when in Spice Alley rather than in the middle of Sydney. 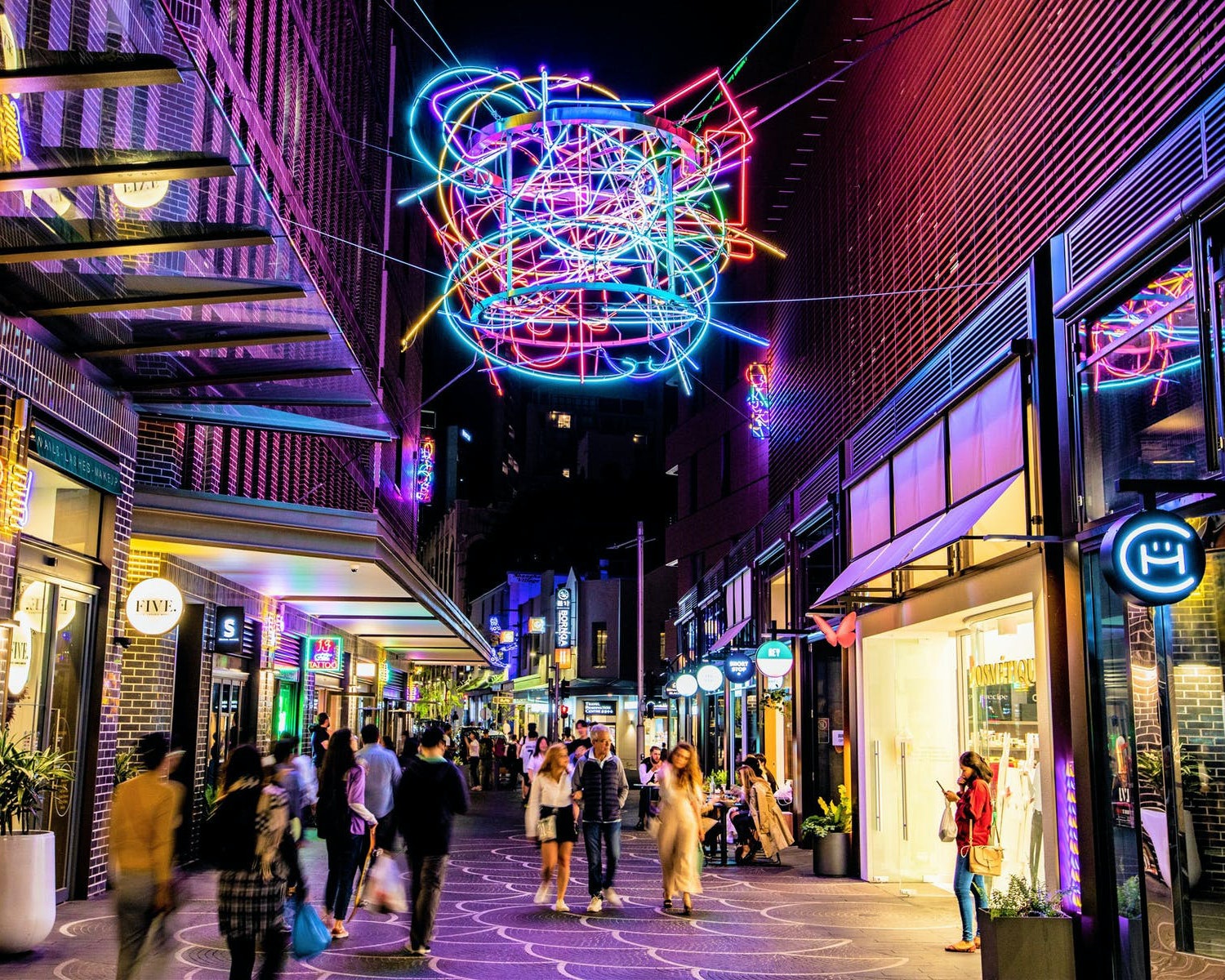 Conveniently located for the light rail just south of Darling Harbour, Darling Square mixes green space and cobbled laneways with over forty restaurant choices. From multi-national chains to Aussie independents, there’s something to suit every palette. Not every city is lucky enough to have a traditional Macau hotpot (Jackpot Hotpot) rubbing shoulders with a bakery selling Hungarian pastries (Kürtősh) or a Japanese ramen joint (Hakatamon Ramen) near a Chinese dessert bar (Bengong Black) but with Darling Square, Sydney delivers and then some. There's also a Messina outpost and one of Sydney's best cafes too. That’s without even mentioning the wide array of cafes, bubble tea stores, and gelaterias.