Cupcakes, you’ve been rocking our sweet tooth since 1796 (take that, cronut), so it’s about time we honour you via what we do best—lists. Donuts, wonuts and duffins are cool and all, but as you progress through life, you’ll find that the ol’ fashioned cupcake will never ever let you down when it comes to those 3 pm sugar cravings.

And, if you’re gonna sink your teeth into something as sweet and moist (FYI, the first and last time we’ll be using that word) as a cupcake, it might as well be a pretty one. Here are our picks of the most beautiful cupcakes in Auckland.

‘Merica may have dibs on the original cupcake recipe, but sisters Amy and Charlotte make theirs with generous dollops of love, creativity and flair—essential cupcake ingredients, don’t ya know? Based in Ponsonby, Amy’s Secret Kitchen’s cupcake range couldn’t be more Pinterest-worthy if it tried. Do your gram a favour and go for a Beautiful Gift Box. Choose between decadent chocolate, lemon curd, red velvet, golden vanilla, chocolate hazelnut and oh-so sticky caramel topped with perfectly piped cream cheese icing, edible flowers, gold and silver leaves. And if that wasn’t enough, the girls also do pupcakes—cupcakes for dogs. CUPCAKES FOR DOGS, PEOPLE! 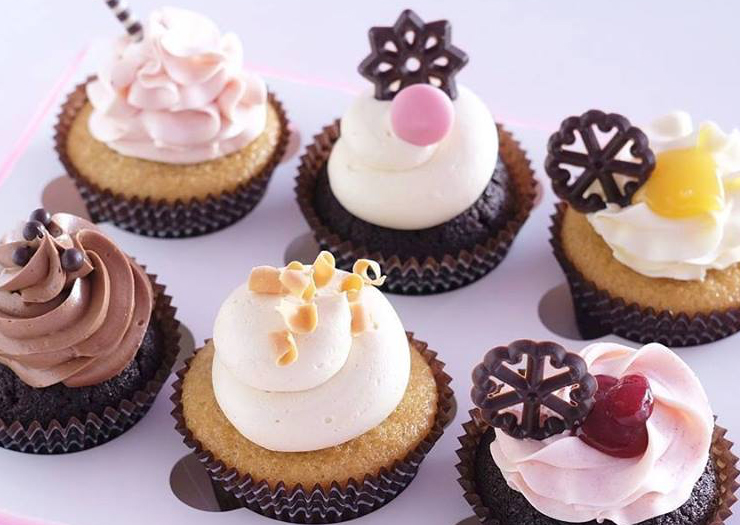 Ah, the old ‘do I need caffeine, do I need sugar or do I need booze’ dilemma? You’ll be pleased to hear that Bloom Cupcakes’ tiramisu cupcake lets you have all three in one delicious hit. We’re talkin’ espresso-infused cake with coffee Kahlua frosting AND a frosting center. But wait, there’s more! Can we also tempt you with a doughnut cupcake? A doughnut cake with buttercream frosting that has been infused in nutmeg and cinnamon along with a caramel drizzle? Yep? Sold! 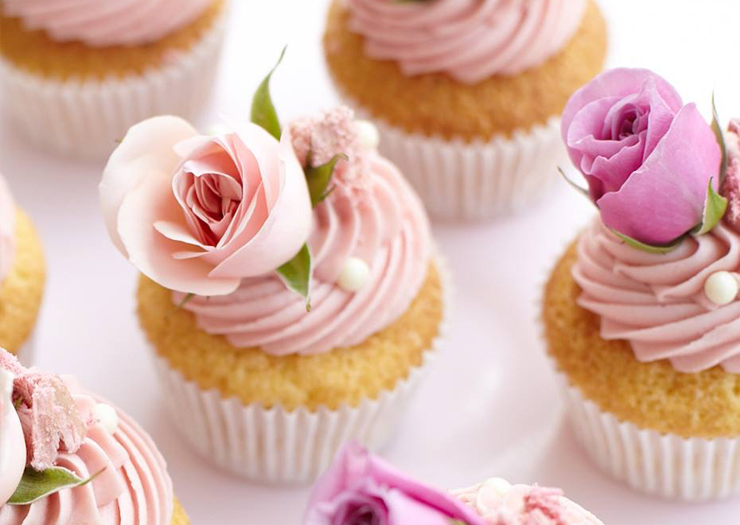 Sometimes, simple is best and all you really want is a generous mountain of frosting on top of a delicate and fluffy little cupcake. Oh-so light and oh-so pretty, Bluebells Cakery know the way to our heart (and stomachs). They even deliver! Keep things fruity with the lovely lemon curd cupcake before stuffing your face with banana and salted caramel, chocolate and raspberry, vanilla, carrot and red velvet. Totally delicious—just watch out for cleavage crumbs.

Bondie don’t just produce pretty cupcakes. Their creations are on another level so they refer to their treats as designer. They do the classic flavours of chocolate and red velvet and a whole lot more. Just a few worth mentioning are the Pic’s peanut butter cupcake, Turkish delight, spiced apple pie and crème brulee. As for beauty, Bondie treats cupcakes as a form of art with their unicorn cupcake and rainbow cupcakes where they stick a classic New Zealand dairy lolly, the infamous rainbow belts into the colourful icing!

Behold, the mini cake! The Caker’s mini cake is the most kickass cupcake-esque item you’ll ever consume. Is it a cake or is it a cupcake? Truth is, we couldn’t give a damn—it’s that bloody good. Sink your fork into a flourless dark chocolate mini cake with caramel and hazelnut praline or a dark chocolate and pear. Cut in to this one and you’ll actually find surprise chunks of pear. These babies are larger than your average cupcake, so go big or go home.

Spare the lives of those poor little cupcakes you always seem to burn to oblivion (RIP) and leave the cupcake making to the pros a.k.a Delish Cupcakes. Whether you’re after the glorious union of strawberry Oreo, peanut butter surprise, Jaffa, cookies and cream or Ferrero Do Share (although we recommend you don’t), then you’re in luck! They’re beautiful cupcakes and damn delicious beautiful cupcakes at that.

Not only do The Macho Mini whip up some delectable cupcakes, they also offer free delivery around Auckland! They’ve steered away from the plain flavours like vanilla and red velvet and went all in with their rocky road and Malteser cupcake. The rocky road is piled on with frosting, marshmallows and chocolate drizzle and is impossible to resist. Same goes for their Malteser cupcake with a chocolate buttercream frosting on top of a rich, dark chocolate cupcake and another Malteser ball to top it all off!

You know when you were a kid, and you had that dream of having a car-shaped birthday cake but ended up with a dry supermarket chocolate log? Well, Sarah of Sweet Temptation can make that dream an epic tasting and looking reality. This clever lady is an icing whiz, turning Minions, Stewie Griffin, Louis Vuitton handbags and that couch from Friends into edible masterpieces. Her cakes are nothing short of amazing, but her cupcakes also blow our minds. These rad little creations can be decorated into quite literally anything. Minecraft? Angry Birds? Boobs? Switch that imagination back on, kiddo.

If Amelia Ferrier of Melie’s Kitchen went head-to-head, Ninja Cupcake Warrior style, against Martha Stewart in a bake-off, her cupcakes would definitely take the cake (pun intended). These morsels of joy come in an array of ridiculously drool-worthy flavours including malt, banana, PB fudge, cornflake and caramel, s’more and Russian fudge, and key lime pie, mandarin and coconut. And to top it off, they’re quite literally too pretty to eat. Cupcake Gods, help us all.

More mini cake goodness, Mint Cakery bake some of the most decadent and indulgent little treats. The lemon meringue mini cake is a beautiful masterpiece of a spongy little lemon cake, shards of meringue and drizzle of lemon curd. If you’re looking for something more fun than sophisticated, their cookie dough cupcake is the way to go. It’s a caramel cake baked with brown butter choc chip cookies, topped with chocolate buttercream, salted caramel and another little cookie on top along with cookie crumble.

It would be simply wrong of us to write about beautiful cupcakes and not mention the Auckland OG of icing art, Petal Cupcakes. They’re the ones that really started the trend in our city of creating a flower with icing and a piping bag and have become a staple in any gift hamper basket. With an endless selection of flavours and colours, our favourite is the lavender and honey. The sweet, honey cupcake is topped with a gorgeous and fragrant lavender and vanilla, purple and white frosting and it tastes as good as it looks.

Your sweet tooth may be begging for mercy right about now, but all of Auckland’s most beautiful cupcakes are yet to be revealed. An entire store dedicated to cupcakes is a winner in our books. Sweetie Pie changes their flavours on the reg, so you’ll have to go every day to make sure you don’t miss out. Flavours of cupcakes past include sticky date toffee, Nutella, lime sorbet, ginger crunch and caramel explosion. They also take the unicorn cupcake to new heights with pastel rainbow frosting and gold shimmering unicorn horn! 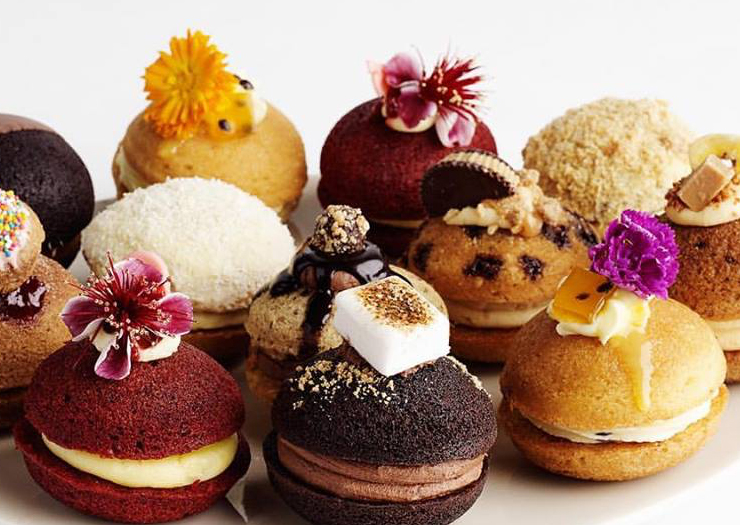 Not too sure on what to call Whoopi's treats, cake, cupcake, mini cake or pie. What we are sure of is that these babies are adorable and taste AH-mazing. To get the most of the frosting which is the best part of a cupcake, Whoopi has cut their little cakes in half and sandwiched the icing in between but that doesn’t mean they don’t add any toppings! Get amongst their Peanutella, a combination of a gooey Nutella center and peanut cake, peanut butter buttercream and milk chocolate shard, this cupcake is a one of a kind.

Hooked on the pretty things in life?