18 Of The Best Fremantle Restaurants Your Should Have Eaten At

There has long been a massive list of reasons to visit Fremantle, from South Beach to Fremantle Prison to the Markets, but the key attraction drawing even the most stubborn of city dwellers down to this seaside suburb is the food coming out of Fremantle’s best restaurants.

After eating our way from the North to the South (and slanting a little back up to the East), we’ve found all the places to stop in this foodie’s haven. Here are the best restaurants in Fremantle, in no particular order.

Is there anyone that doesn’t want a wood-fired oven in their own kitchen? Given we can’t all have what we want, why not settle for a night out at Manuka Woodfire Kitchen. As you would expect this place is the spot for honest, hearty food with fiery flavour. They are another fan of local produce and take it to the next level by offering a range of local beer, wine, cider and coffee.

If you’re not already familiar with the mouth-watering delight that is Old Faithful Bar & BBQ in Perth, what have you been doing? It’s iconic dishes like their signature Brisket—which is brined for six to eight hours and then smoked for 14 hours using a house-made Texas-style rub—are the reason they’ve well and truly earned their rank as one of Perth’s most delicious American-style BBQs. So naturally, we were overjoyed when we got word that these guys we’re expanding beyond their flagship post and recreating their epic old-world vibe in a basement setting in Fremantle.

A bar on the coast sounds pretty good to us. Add in some share plates full of local seafood and a bit of live music and you’ve got us sold. No wonder Madelana’s Bar made such an impression on South Terrace when it opened in 2018. The team here has a huge focus on sustainability and work closely with guys at Fins Seafood to make sure they’re only dishing up the freshest local bites. Who doesn’t like a side of sustainability with their seafood? 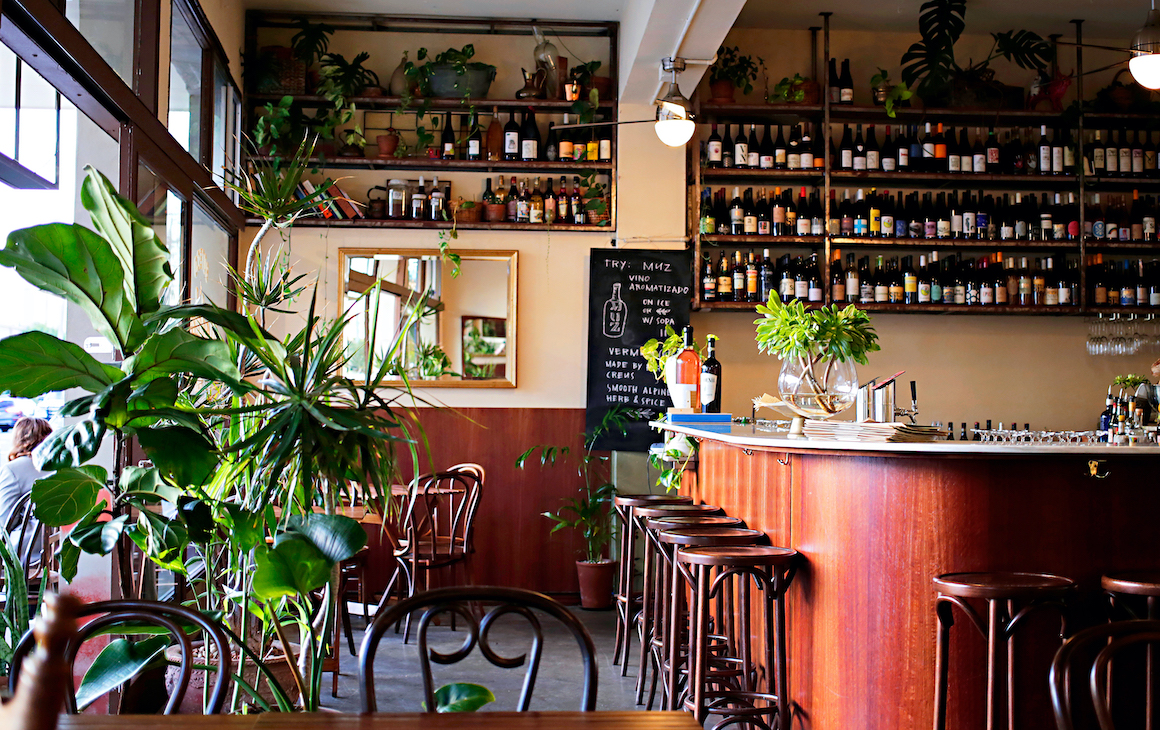 There is no denying the impact of Tonic & Ginger on the Fremantle food scene. Sitting inside The Old Synagogue along with siblings The Arbor, Mr Chapple and L’Chaim, you could while away an entire day here. Our ideal night? Swing by The Arbor for a casual drink, get some food in your stomach at Tonic & Ginger, then head downstairs to L’Chaim for an old school cocktail; and why not head back in the morning to soothe your head with a Gesha coffee at Mr Chapple. This funky eatery has loads of personality, style and a vibe that screams Fremantle. Think Cookie Melbourne circa 2010; Asian fusion that will have all your taste buds firing.

Meet Emily Taylor, the 450-person bar and restaurant opened as part of the new Warders Hotel, neighbouring the Freo Markets. You might be thinking, a hotel restaurant, really? But honestly, it doesn’t get much better than throwing back a cocktail or two as you tuck into a yummy Asian feast in Emily Taylor’s huge leafy courtyard. The menu is broken down into dumplings, buns and bites, share plates, and their signature Emily Taylor roast duck which you won’t want to miss. 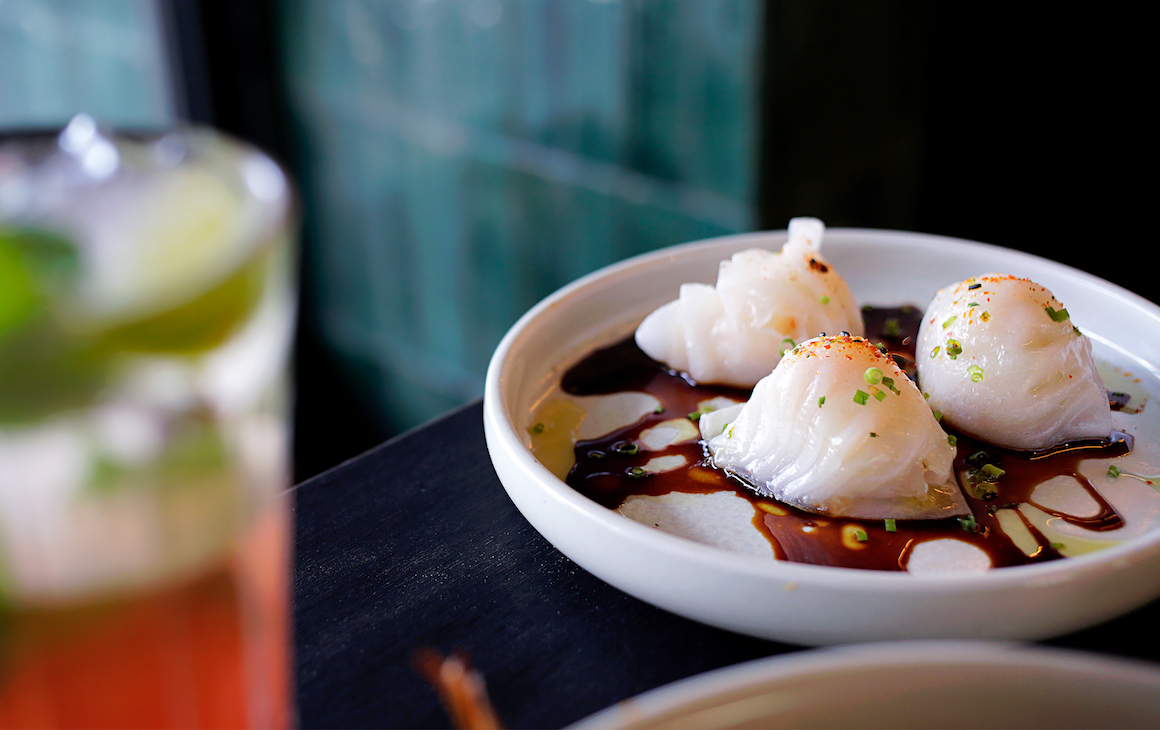 Boasting one of the best beachside views in Perth, Bib & Tucker is the perfect spot for an after swim cocktail (or, even better, build your own G&T with their wide range of Gin and Tonics) in your slides on a hot summers day or that long lunch you’ve been dreaming of while sitting at your desk all week. The modern Australian menu is the perfect complement to the exquisite views and it definitely does not fail to deliver on taste.

Chuck the words ‘Perth’s first’ in front of anything and we can’t help but get a little curious—especially if it combines food and tech. So when we heard Perth’s first robot waiter had landed at this brand new Thai eatery, we had to check it out. Introducing Spice Market, the newest restaurant to hit the High Street Mall strip in Fremantle and home to Perth’s first robot waiter, Jasmine. But aside from the robot drawcard, Spice Market has a lot going for it—think a huge range of scrumptious Thai eats spanning everything from whole barramundi to pork belly bites and everything in between, all backed up by super 'grammable cocktails and vacay-worthy decor.

The Raw Kitchen was what we’d call an institution among the vegans in Perth, but they underwent a massive transformation during the COVID lockdown and came out on the other side as Mother. It’s still all plant-based and all delicious, but the menu will appeal to even your most carnivorous mates. There are vegan cheeseboards that taste like the real deal, a mushroom risotto which you won’t be able to forget about for months after eating it, cocktails to contend with the best in Perth and so much more. 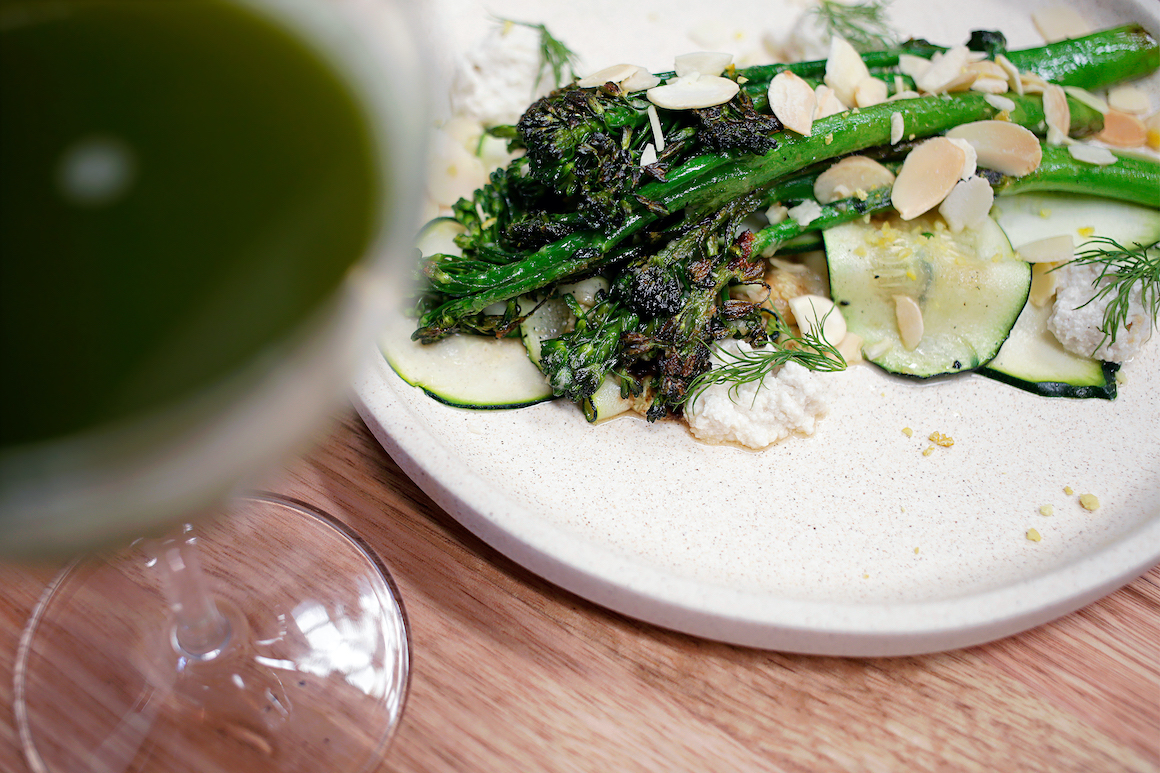 When talking Fremantle food there would be no list without Bread In Common. Prior to its establishment, the Fremantle food scene was about BYO pizza and pasta (not that there is anything wrong with that) but Bread in Common upped the ante when they came along with their menu inspired by locally sourced, seasonal produce based all around—you know it—bread. Their long tables and shared menu make them the perfect spot to break bread with your friends.

La Cabaña opened with a bang earlier in 2020 with its delicious Mexican fare. Brought to you by the team behind Eat No Evil, this menu takes fresh Western Australian produce and injects it with the most authentic Mexican flavours. Add a margarita to start then finish with a shot of mezcal and you can’t go wrong.

Technically not a restaurant, but as the home to many of the best eats in Fremantle, we couldn’t mention The Sunshine Harvester Works. Take your pick from Chinese-style dumplings at Bumplings, Singporean BBQ at Ray’s Satay, Asian street eats from Dingo Dining, Mexican goodness at Al Pastor, flavours of Mauritious at Pantry 92 or any of the old favourites like Stampede Gelato and Freo Pizza Factory. And why not wash all that food down with a drink from Union Brewery... now, that sounds like a Fremantle feast to us. 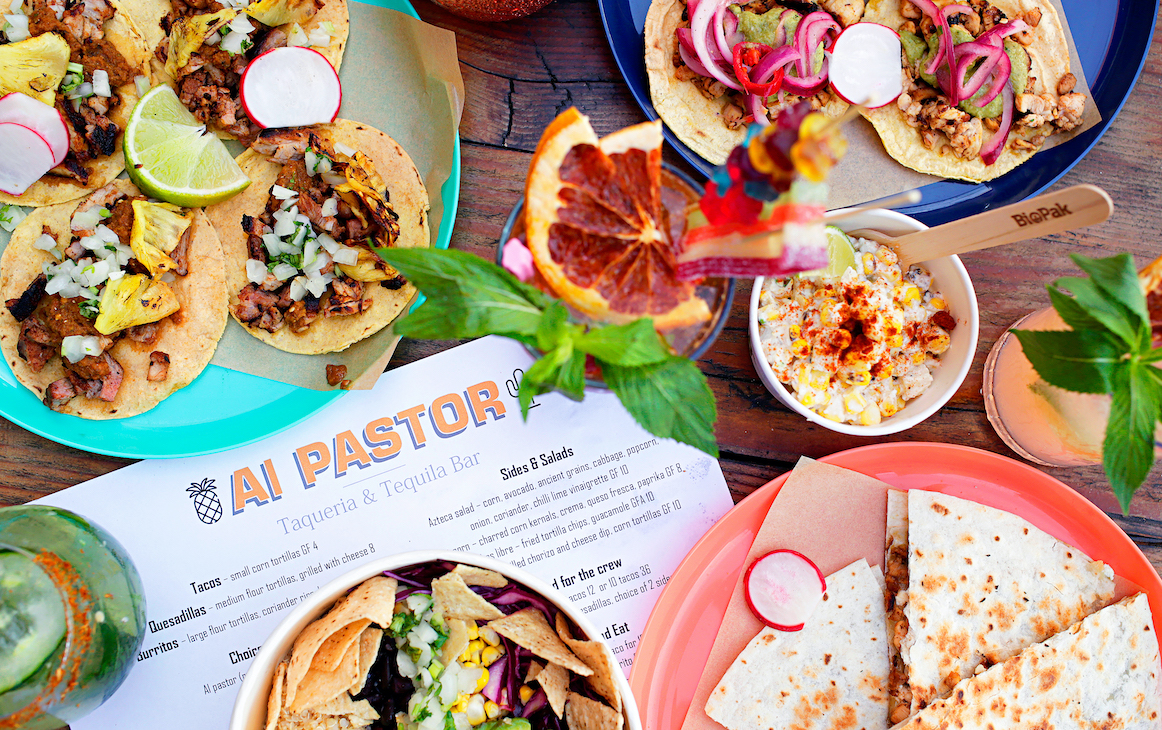 This quaint little gem hidden in North Fremantle is 100% worth finding. An unassuming restored Fremantle character home makes the perfect setting for a cosy, relaxed meal with good vibes. Their menu focuses on fresh local produce and changes seasonally. As does their wine list. Not only does Habitue deliver on food and atmosphere but they often feature live music—the trifecta.

Coming to us from the team behind Duck Duck Bruce, Lions and Tigers is the kind of place that Fremantle locals try to keep hidden from the rest of Perth. It’s not exactly a secret gem—in fact, it’s often booked out and always buzzing—but there are far too many locals who haven’t made their way yet considering it’s undoubtedly one of Perth’s best restaurants. The team has perfected modern Indian cuisine and every dish we’ve ever tried is teeming with flavour. The sourdough naan is basically a right of passage and you don’t want to go past the roti tacos—the filling changes on the reg so you can keep going back for more.

Across the road from Habitue, you will find the less hidden Propeller—you can’t miss this old converted bus garage with its colourful ship container located right on the corner of Queen Victoria Street and Harvest Road. Both different, yet equally noteworthy in what they bring to the Fremantle food scene. The menu offers a plethora of modern middle-eastern flavours but if you can’t choose to let the chef do it for you with the chef’s choice menu! 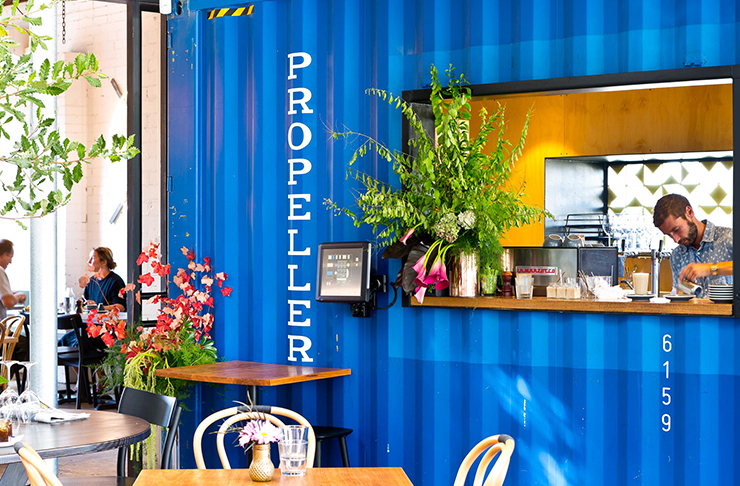 Late-night bar and kitchen, Young George is everything. We’re serious—the cellar downstairs is perfect for a private venue, the bottleshop next door offers a great range of beverages and the location is perfect for breakfast, lunch or dinner. Not only that, but Young George manages to bring up-market and neighbourhood casual to meet somewhere sweetly in the middle. And while we’re talking sweet, we strongly suggest you dip into the dessert menu with the deep friend white chocolate ice cream or reverse Malteser. It doesn’t hurt to know that the kitchen is totally waste-free.

Ethos opened after the COVID lockdown from the same team behind Young George and it has delivered on every front. The idea behind Ethos is simple—good food, inspired by traditional recipes, plated with a zero-waste approach. Ethos is all about preserving and finding a use for every part of the ingredient they use, using compostable packaging and recycling whatever they can. Whether you’re stopping by for a sandwich from the New York-style deli or sitting down for a heavenly meal, you won’t be disappointed. 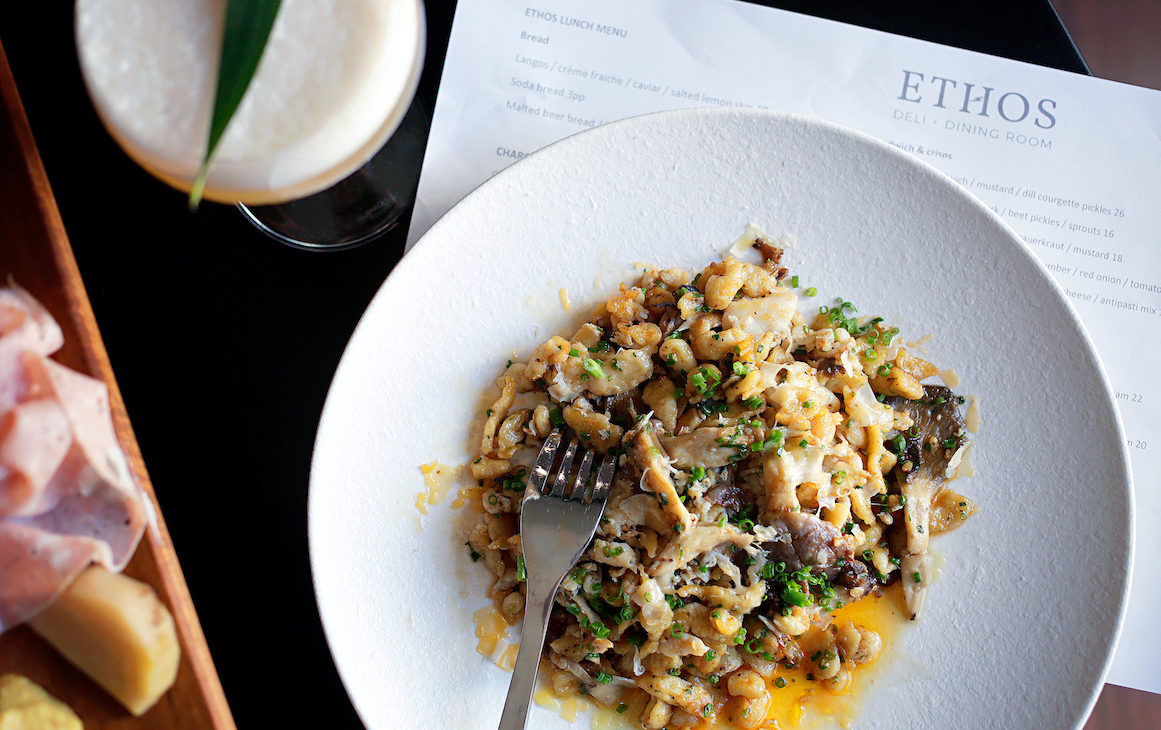 There isn’t much to say about Little Creatures that hasn’t been said before. The iconic Freo brewery is full of all the good things we look for in a pub—loads of tasty menu options, a backyard for soaking up the sunshine, a huge indoor dining area, craft beer and a vibrant and welcoming atmosphere. It’s the perfect place to soak up the busy port-side vibe and enjoy the best of what the city has to offer. The wood fired pizzas are hard to pass up but if you can, there’s loads of other menu goodness including oysters, marinated octopus, nachos, steak sandwiches and fresh fish. One of Fremantle's best restaurants for sure!

Brought to us by two brothers who grew up in the Provence region in southern France, Angel's House is a French restaurant with a mission to make French food less intimidating. With a casual alfresco area and share plates on the menu, it's the perfect spot for a drink and a nibble, but you can also go for the full-blown French affair if that's more your style. Think chicken vol-au-vent, boeuf bourguignon and riz au lait and you're on the right track.

Been to all of the best restaurants in Fremantle? Check out our favourite eats at the Fremantle Markets.