Holy moly, guacamole. Things have well and truly hit the fan on Married At First Sight. Chaos and accusations were at the centre of tonight’s drama-filled episode. And, after a veeery tense dinner party shitstorm, we’re down to three couples. Here’s what we were thinking as we watched things unravel.

1. A dinner party just seems like an excuse for some extra drama (case in point: the cocktail party).​

2. Quick question: why are they driving all around Auckland when the Oakroom is a one minute walk? Build-up much?

3. Will Bel and Haydn show up to said dinner party?

4. Ben: “It’d be pretty fun if they come.” Ben is ALWAYS down for some drama.

5. Brett: “I came on this to find a wife. I’ve got my wife. I don’t want to sound like a dick but I’m not here to have drama.”  Brett has nooo time for that. 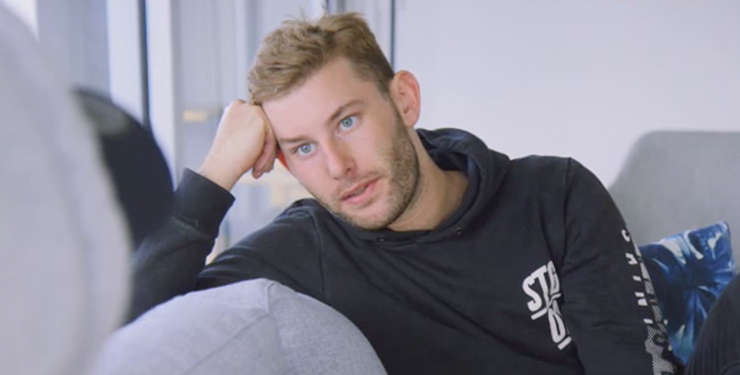 7. Ben: “I need you to mentally prepare yourself for this next bit of information.” Aaron’s face is literally ours right now. WHAT’S HAPPENED?!

8. Ben: “… They said that they saw Bel in the carpark.” THAT’S what we were mentally preparing for?! 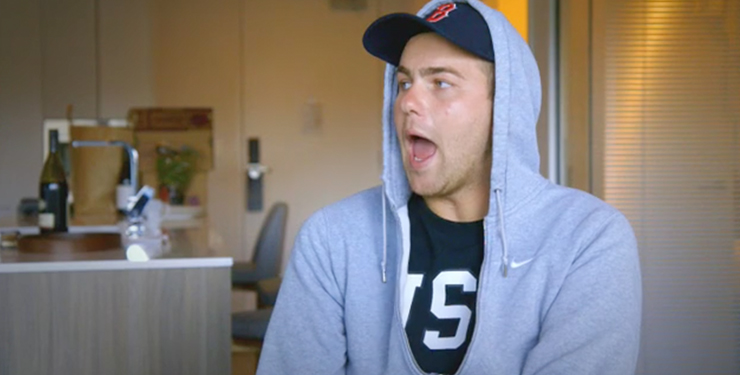 10. Ten bucks tonight ends in a full-on wrestling fight between Ben and Haydn.

11. Tony: “Are they really in it for the commitment to their relationships or are they simply here for the drama?” That’s the million-dollar question.

12. Ermahgerd who will be the second couple to arrive?!

13. We bet Lacey/Luke and Claire/Dom are stoked they left this shitshow.

14. Of course Bel (aka The Bachelor’s resident crazy cat lady) and Haydn have been on a date to a cat lounge. 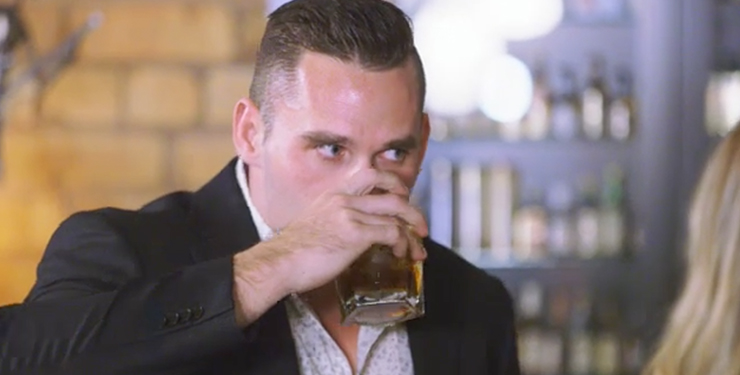 15. There are a fair few nervous swigs going on here. 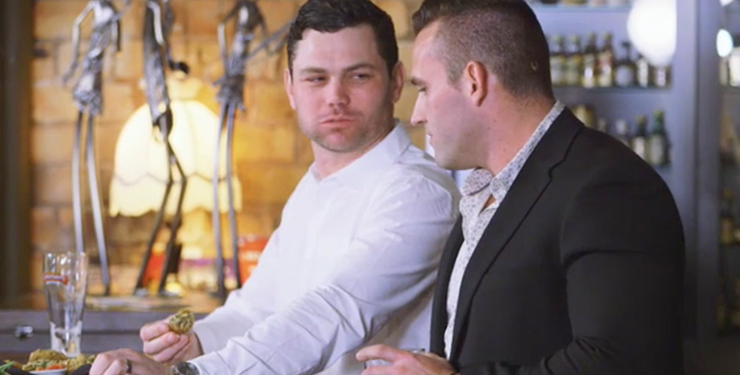 20. Bitching in the bathroom? Can we puh-lease just grow up a little, guys?

21. Aaron: “I’m just going to address the elephant in the room. You’re back!” No beating around the bush here.

22. Focus on your own relationship, Ben. 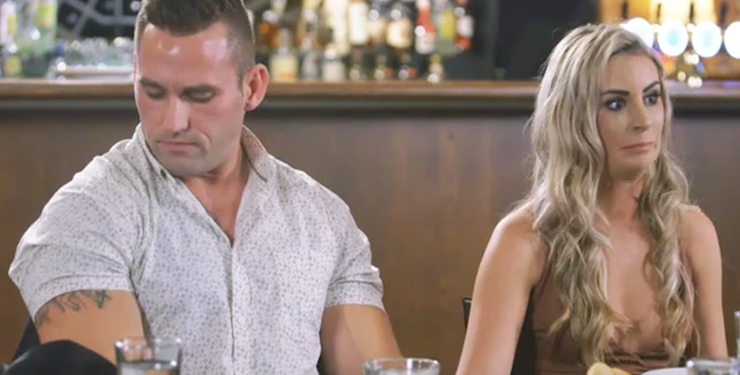 24. Yep, your biceps are still there, Haydn.

25. Does Bel reeeaally have Haydn’s back? We say no. She totally threw him under the bus.

26. Aaron, be the bigger person. Don’t cave into the drama because it gives you a false sense security with Ben. 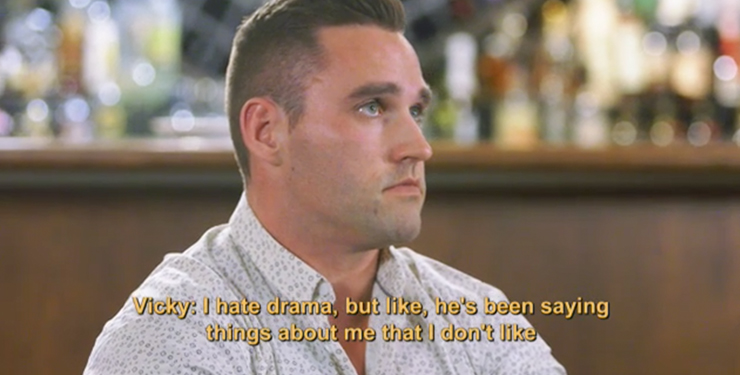 28. Yikes, Ben is one seat closer to Haydn. The poor dude is in the firing line now.

29. Bless Brett for trying to cut the tension with tomato sorbet chat.

30. Yet another bathroom chat. This is getting exhausting. 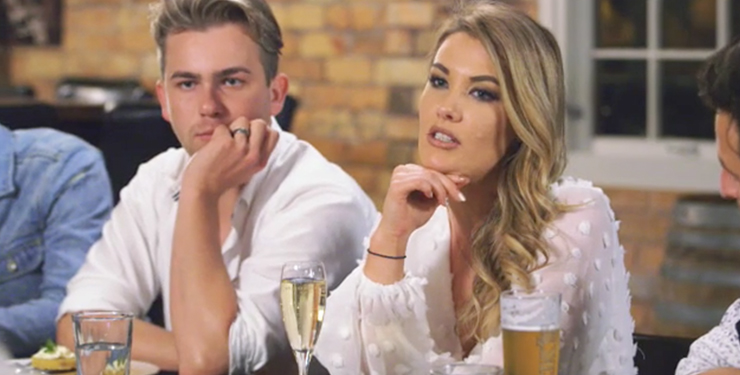 33. Gal, if you genuinely wanted to clear things up. A one-on-one convo with Haydn would have been the way to go.

35. Who messaged who first is kinda irrelevant. You were both in the wrong. 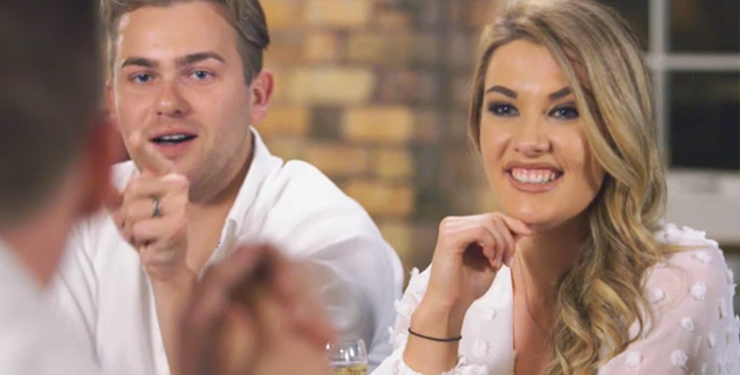 36. These two are looovin’ it. It’s the happiest they’ve been the entire season. 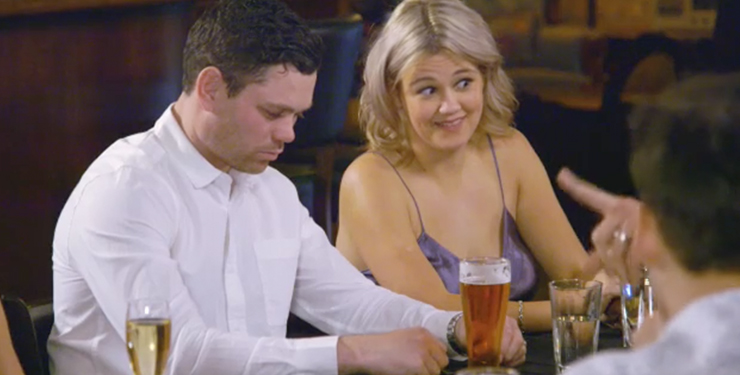 38. OH MY LIFEEE. WHAT IS EVEN GOING ON?! Accusations left, right and centre.​

39. Ben: “You’re apparently straight so let’s make sure your story is too.” Hah.

40. “Guys. Guys. We’re adults. Let’s sort this shit.” Some clarity within the chaos.

42. “You have to be good looking to be a model, anyway.” Shots FIRED from a frustrated Haydn. 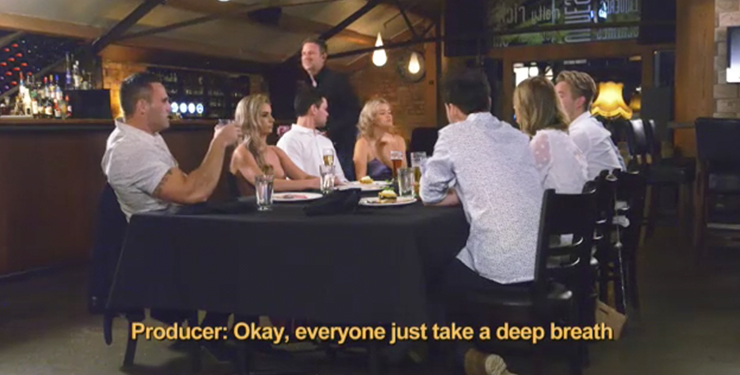 43. Ever the producer has had enough.

44. The party’s over before they’ve even finished dessert. Gutted.

45. It’s all over red rover for Bel and Haydn. What an exit.

47. From six couples to three. Married At First Sight is a roaring success for New Zealand.

48. Thank the Lord for Brett and Angel and their post-party omelettes.

49. Meanwhile, things are grim between Aaron and love-me-some-drama Ben.

50. After last night, we’d rather hang with an ex than with Ben…

52. Has Andrew been spending some ‘one-on-one’ time with another girl’s photo?

53. Wait? Is this while he’s been on the show? These marriages are f**ked.

55. Annnd that’s a wrap. THANK. GOODNESS. But, let's face it: you know where we'll be tomorrow night.