While it might seem crazy to some, lovers of running and masochists alike will travel great distances to run great distances. Like laughter, running is universal, and marathons have a history that goes way back in time. When you run a marathon, you aren’t just running a race—you’re contending with distance and with your own mind. But you’re also running in the footsteps of millions of people who’ve run these distances before you, for reasons spanning from necessity to insanity.

At least, that’s what they’ll tell you. But we also think that copping incredible sights while burning countless calories is pretty motivational too. If you’re a runner, combining travel with marathon running has probably already crossed your mind. If you’re not, what better way to motivate yourself to attempt a marathon than to throw in an exotic holiday? Spanning the world’s major cities to the most remote places on earth, north to south and east to west, here are 20 marathons around the world worthy of a spot on your bucket list!

Known for being flat as a pancake (among other things, we’re sure), this marathon isn’t just for the elites. The London Marathon attracts tens of thousands of amateur runners every year, who run, costume clad and in the name of charity, past sights like the Big Ben, Buckingham Palace and the London Eye.

Attracting around fifty thousand runners and more than a million spectators annually, the New York City Marathon is nothing short of an international icon. While the first race was run entirely within Central Park, the course now winds through all five boroughs of the city, the streets lined with spectators. It’s the world’s largest marathon, one of the major six, and people from all over the world flock to the city to run it.

First run in 1897, the Boston Marathon is the one of the oldest in the world. The qualifying standards for mass racers are known to be more rigorous than that of its World Marathon Majors counterparts, but apparently that’s what makes it so attractive. Funny, since you would’ve thought the net downhill nature of the course would’ve been the main motivator. Despite being named after the city in which the race culminates, the Boston Marathon traverses eight cities and towns across the beautiful Massachusetts.

Probably as picturesque as marathons come, the Great Ocean Road Marathon course winds along Victoria’s spectacular southern coastline between Lorne and Apollo Bay. With views this good, it’s no wonder thousands of people are clambering to join the run each year. Both the start and finish lines act as festival hubs for the weekend-long event, with one of the ‘must-sees’ being the Pub to Pub Waiter’s Race—a local spectacle where waitstaff from the Apollo Bay Hotel and the Great Ocean Road Brewhouse race to carry a tray of beer between the two watering holes without spilling a drop! Ah, ‘Straya.

Only for the certifiably insane, the Antarctic Ice Marathon is literally the final frontier of adventure running. The whole thing takes place at 80 degrees south, not far from the South Pole, and is a truly formidable challenge. You’re running on snow and ice, in wind chilled temperatures of -20C and colder, and at an altitude of 700 metres. The whole thing is incredibly unique, but the strangest part is also the most obvious: no spectators. Not even a few penguins to cheer you on. This is the ultimate mental and physical challenge!

Combine past and present as you run through the ancient streets of the Italian capital! Past, because the course is set amidst the incredible buildings and historical sites of Rome, and present, because all you’ll be able to think about is how much pain you’re currently in (oh, and also Rome is a thriving, modern metropolis). The Rome Marathon is known for being relatively flat, but the cobblestone streets apparently pose quite the challenge. Of course, the world class carb-loading opportunities are also a drawcard.

Walking on the Great Wall of China has been done to death. Why not run it instead? Expect incredible views and a serious sense of achievement, but do not expect ease. The Great Wall Marathon takes place on a stretch of this incredible monument that covers more than 5,000 steps—and we don’t mean your steps. We mean actual, ascending and descending stairs. Runners often ascend hundreds of metres in mere minutes.

We Aussies speak of endless sunshine, but in the summertime in Tromsø, Norway, it’s a reality: the sun actually never goes down. The Midnight Sun Marathon boasts one of the world’s northernmost courses, and runners endure through the sunny night with the enthusiasm and vigour that only people who haven't seen darkness in a month could. It’s one of the world’s most experiential marathons, and also one of the most picturesque.

If you’re a marathon enthusiast, ticking off the Athens Authentic Marathon is rudimentary, if not entirely compulsory. The marathon’s course follows the tracks of the Greek soldier Pheidippides, who in 490 BC ran from the ancient city of Marathon to the capital bearing news of a Greek victory against the Persians in the Marathon Battle. It is, if you like, the midwife of the modern marathon. Runners face a tough 30 kilometres of uphill terrain, but also enjoy the beauty of the hills of Athens, steeped in rich beauty and historic tales.

Old meets new in this recent(ish) addition to the World Marathon Majors. More than 30,000 runners descend on the Japanese capital to take part in the Tokyo Marathon, which takes you through areas of historical importance such as past the Imperial Palace, as well as of contemporary significance, such as Tokyo Station. 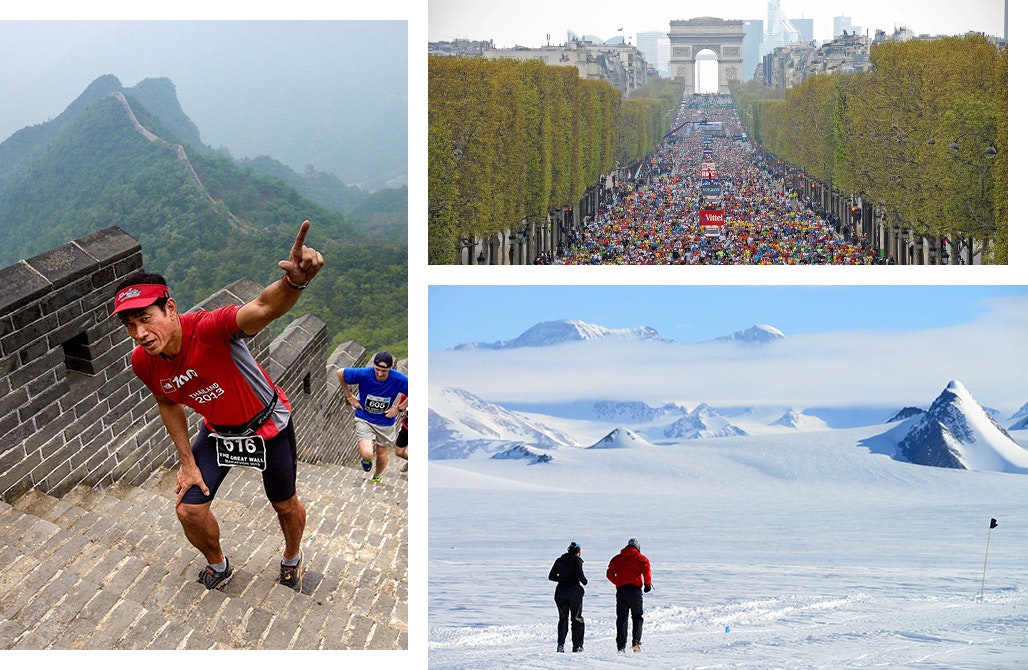 While the ‘coolest marathon on earth’ joke might be a tad overdone, it remains accurate. The Polar Circle Marathon takes place in Kangerlussuaq, Greenland, in temperatures well below what can be considered bearable (for Aussies, that’s about 28 degrees Celsius). Part of the course is right on the ice sheet, but for the rest you’ll be on (usually snow covered) gravel tracks, running alongside musk oxen and arctic foxes!

Ocean-loving runners will want to get on a plane to California ASAP for the Big Sur International, one of the world’s toughest marathon courses that winds up the coast of Cali from Big Sur Station to Carmel, crossing the iconic Bixby Bridge. The hard work is worth the reward, which (beyond cash) include towering redwoods, crashing waves and rugged coastal mountains.

The Big Five Marathon is a rather exclusive escapade that combines a marathon with a classic African safari experience. The marathon is named in reference to the ‘big five’ African game animals—the Elephant, Rhinoceros, Buffalo, Lion and Leopard—the natural habitat of which hosts the marathon’s course—no fences, no nothing, just you and the animals. If there were ever a place to obtain a serious PB, this is it.

This massive marathon, one of the World’s Major six, is also said to be one of the most diverse, with all fifty US states and runners from more than 120 countries having been represented throughout its more than forty year history. The course is said to be dead flat, extremely quick, and scenic: you run through 29 neighbourhoods across Chicago, ending up almost back where you started on Columbus Drive, right in Grant Park on the Monroe Harbour.

The Berlin Marathon made history when, in 1990, just days before the reunification of Germany’s east and west, 25,000 runners streamed across the finish line through the Brandenburg Gates with tears in their eyes. One of six World Major Marathons, the marathon’s course is a voyage through the city’s most historic areas, including Friedrichshain and Kreuzberg in the east and Charlottenburg in the west, ending up in Mitte, right near the Bundestag.

If running in a warm tropical climate appeals, the Honolulu Marathon is the one for you. It’s the fourth largest marathon in the United States, with more than 30,000 runners each year from all over the world coming to enjoy the spectacular Oahu coastline. Things get pretty hot, but cold showers are provided at the finish line!

Set against the backdrop of Africa’s highest mountain, the Kilimanjaro Marathon takes runners along old tarred roads amidst farms and coffee and banana plantations for the duration of the race. While much of the course is flat or downhill (this is one of few marathons with a turnaround point: for part of it, you are running back to where you came from along the very same track), there is also an 8km-long incline of about 250 metres.

In what’s possibly the height of where your travel and marathon bucket lists intersect, the Petra Desert Marathon takes you through the lunar-like Jordanian desert. Yes, that does mean the course terrain consists primarily of sand (fun!), but it takes you past ancient tombs, mountainside carvings and caves and, eventually, through some of the most unadulterated desert landscapes left in the world. Worth it.

A marathon shrouded in mystery, the Bagan Temple Marathon takes runners through a rural piece of central Myanmar, Bagan, which is home to more than 2,000 temples and pagodas of historical significance and extreme beauty. This is one of Asia’s richest archaeological zones—what better way to explore it than on foot, sweating beads, and with no option other than to keep on running?

Finishing things off with a classic: running through Paris in the springtime had to make the cut. The Paris Marathon sees more than 50,000 runners hit the course every year, starting on the Champs-Èlysées, passing sights like Notre Dame and the Eiffel Tower as they run along the River Seine, sweep around the Bois de Boulogne, and back up Avenue Foch toward the finish line at the iconic Arc de Triomphe. The best part? You can eat all the guilt-free cheese, steak and frites you want when you’re done.

Want more? Here are 9 ways to get fit without joining a gym.