The Best Things To Do In Sydney This Weekend

Sydney is jam-packed with awe-inspiring events around every corner. A feast for the eyes and ears, be sure to check out what's on here.

The last weekend of January is upon us, meaning there’s just one month left of summer frivolities and festivities. Lucky for all of us, there’s no sign of the seasonal fun slowing down, with enough parties, live music and art to keep us busy all weekend.

This weekend marks the iconic day we all band together and celebrate triple j’s Hottest 100, and you can bet there are plenty of parties joining in on the action, as well as a different type of countdown. If lapping up the sun is your weekend priority, head over to Botanic House for a pop-up gin bar, or alternatively settle in to watch the Australian Open finals on a mini Euro tennis terrace.

Here are the best things to do in Sydney this weekend.

Sound Out The Street

This week brings the last Friday of the month, which means Sound Out The Street is back. The event brings another round of stunning sunsets, live music and visual art activations that are all free to enjoy to the streets of Erskineville, centred around the Town Hall. The PACT Centre for Emerging Artists has partnered with DirtyFeet and the Sydney Opera House to bring you Emily Flannery’s Bulnuruwanha (Taking Flight) workshop, sharing Wiradjuri Dreamtime stories, with loads of stories, sounds and performance pop-ups around the Erskineville streets including imagery from 2022 Archibald Prize winner Blak Douglas. Check out the full lineup here. 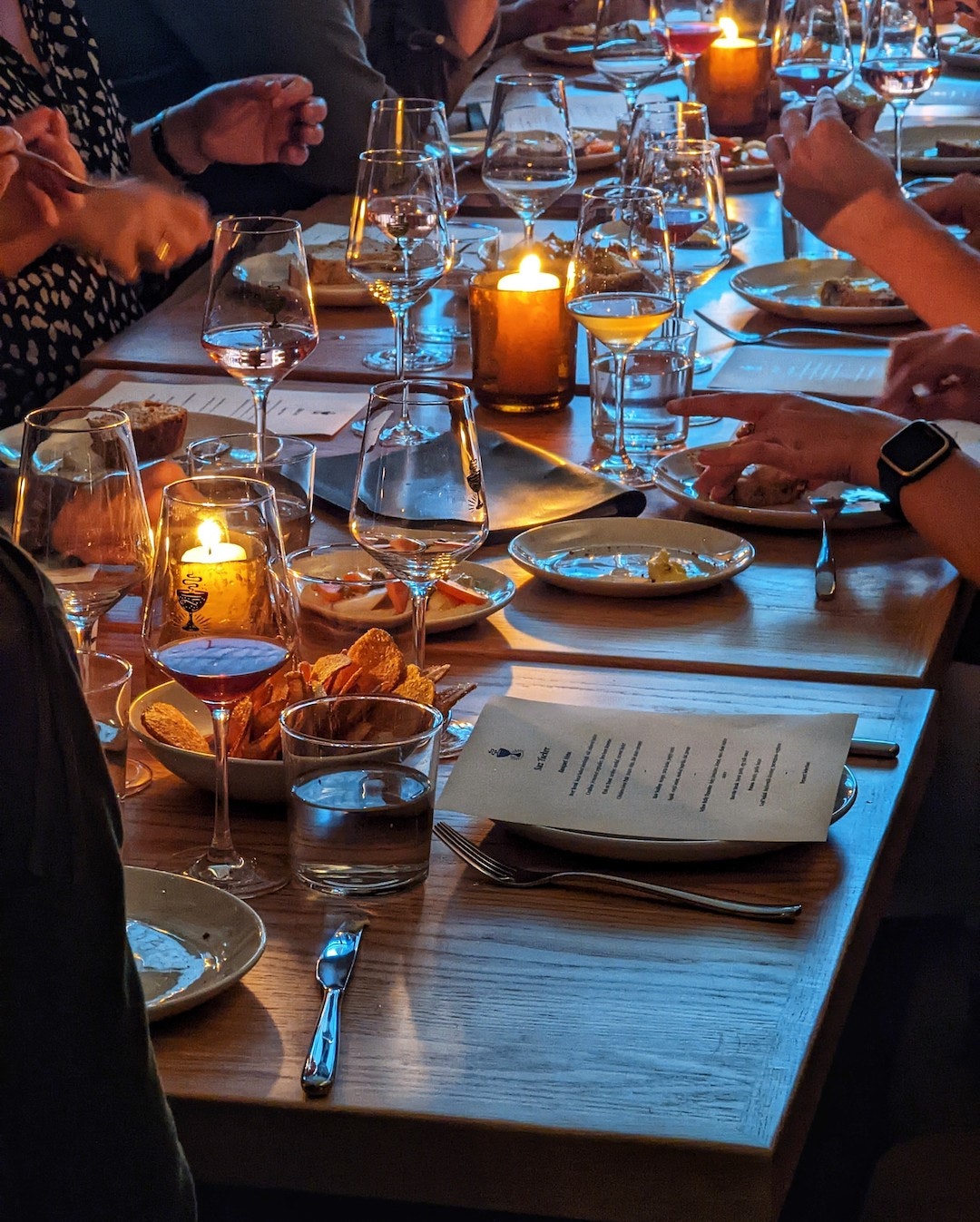 It’s no secret that natural wines are sticking around for 2023, so Odd Culture is partnering with Seán McManus from Real Wines for a boozy afternoon featuring great food and even better wine. The team will be dishing up a curated menu inspired by great natural wine venues across Europe including raw veal with anchovy and saltbush, mussel toast, and lamb sweetbreads to pair with by-the-glass pours of some of Europe’s finest natural wine alongside an epic rare cellar list for the big fans. Head over here to book.

Cuckoo Callay has your Saturday morning hangover cure sorted (and for free) this weekend; they’ll be slinging 100 plant-based buns thanks to their partnership with Impossible Foods. Whether you’re vegan or not, it’ll be hard for anyone to resist the temptation of caramelised onions, harissa ketchup and potato buns with Impossible pork and beef patties wedged right in. There are only 100 freebies to go around, so head in early for a free breaky or risk missing out.

We’ve all heard of Triple J’s Hottest 100 Party, but one lesser-known (yet equally lovable) countdown is the GABS Hottest 100 People’s Choice. For those out of the loop, the party is essentially the beer and brewery equivalent of Triple J’s countdown—and the polls often predict which beers us Aussies will be downing for the next year. This Saturday, breweries around Sydney are lighting up in time for the celebration, including Akasha Brewing Co in Five Dock, One Drop Brewing Co in Botany and the Union Hotel in Newtown. Head over here to check out all the participating venues.

The countdown to WorldPride is on, and Sydney is already gearing up for an epic celebration of the LGBTQIA+ community. This Saturday, Cook + Phillip Park Pool is opening for a free pool party for trans and gender-diverse communities. From 3pm, visitors will be treated to DJs, snacks, roaming entertainment and games as well as exclusive access to use the pool and gym facilities. The family-friendly alcohol-free event is the perfect option for those looking to cool off from the heat in a fun and inclusive environment. Head over here to reserve tickets.

Australia’s most loved annual music countdown is upon us again, so you can bet that Sydney is gearing up for it in a big way. Triple j’s Hottest 100 is back, so you’re bound to get a healthy dose of countdown controversy and epic music. Head over to Darlo Bar in Darlinghurst from 12pm for an afternoon of $16 Resch's jugs and BYO dogs. Alternatively, Chippendale institution The Lansdowne is also hosting their own do with $15 Young Henry’s jugs, $6 house spirits and DJs playing from 4pm on the rooftop. Hermans Bar Lawn at Sydney University is also hosting its iconic annual party, and still selling tickets (on the condition you BYO bucket hat). 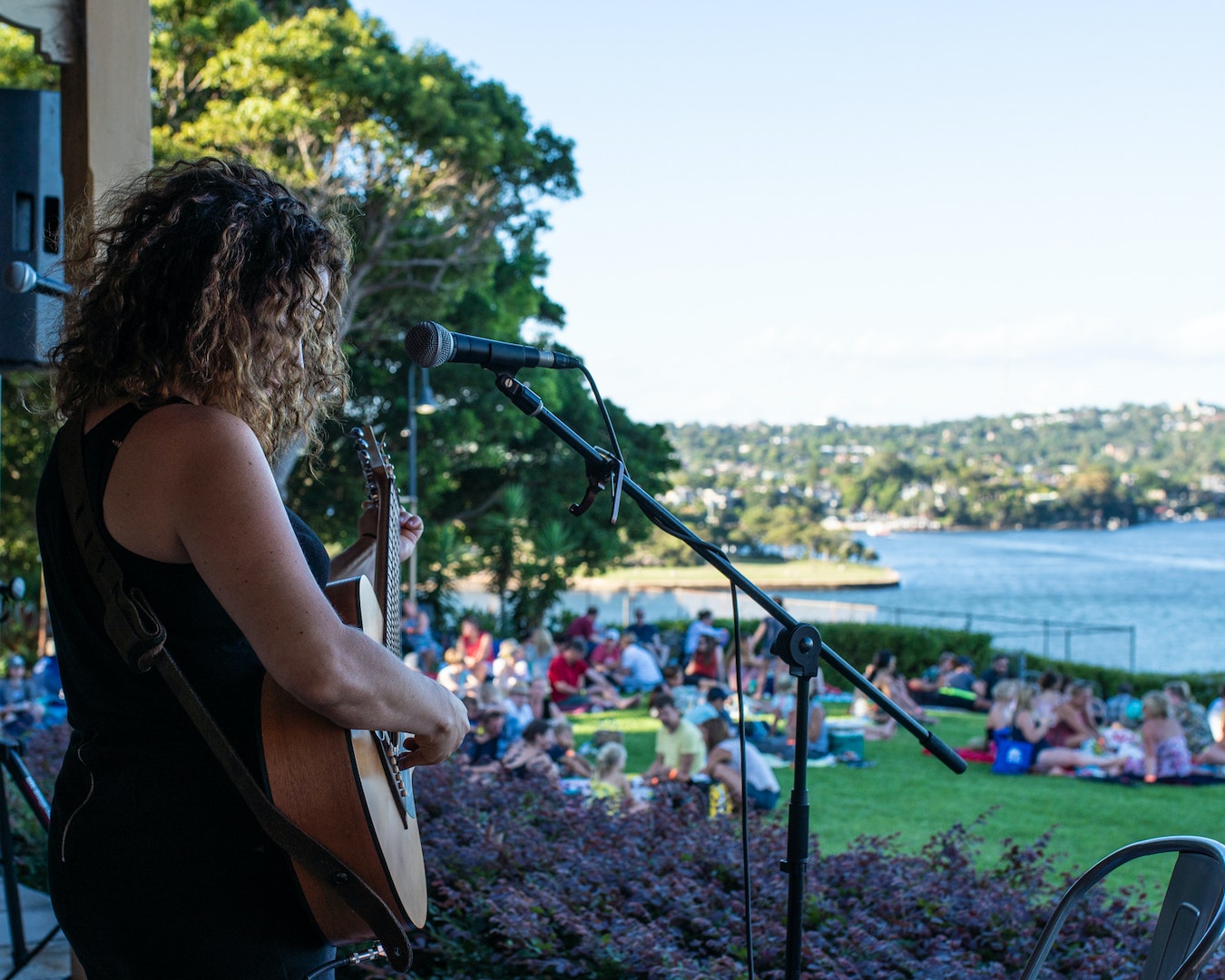 Stunning historic site Cockatoo Island is hosting a weekly live music series on its gorgeous elevated Biloela Lawn, providing the vibes for some stunning summer sunsets. The picnic-style gigs welcome Aussie musicians from a wide range of genres and include First Nations and LGBTQIA+ talent—you can see the weekly lineup here. Grazing boxes can be pre-ordered with ticket purchases, and the bar will be serving drinks and snacks. Learn more and book tickets for $35pp here. 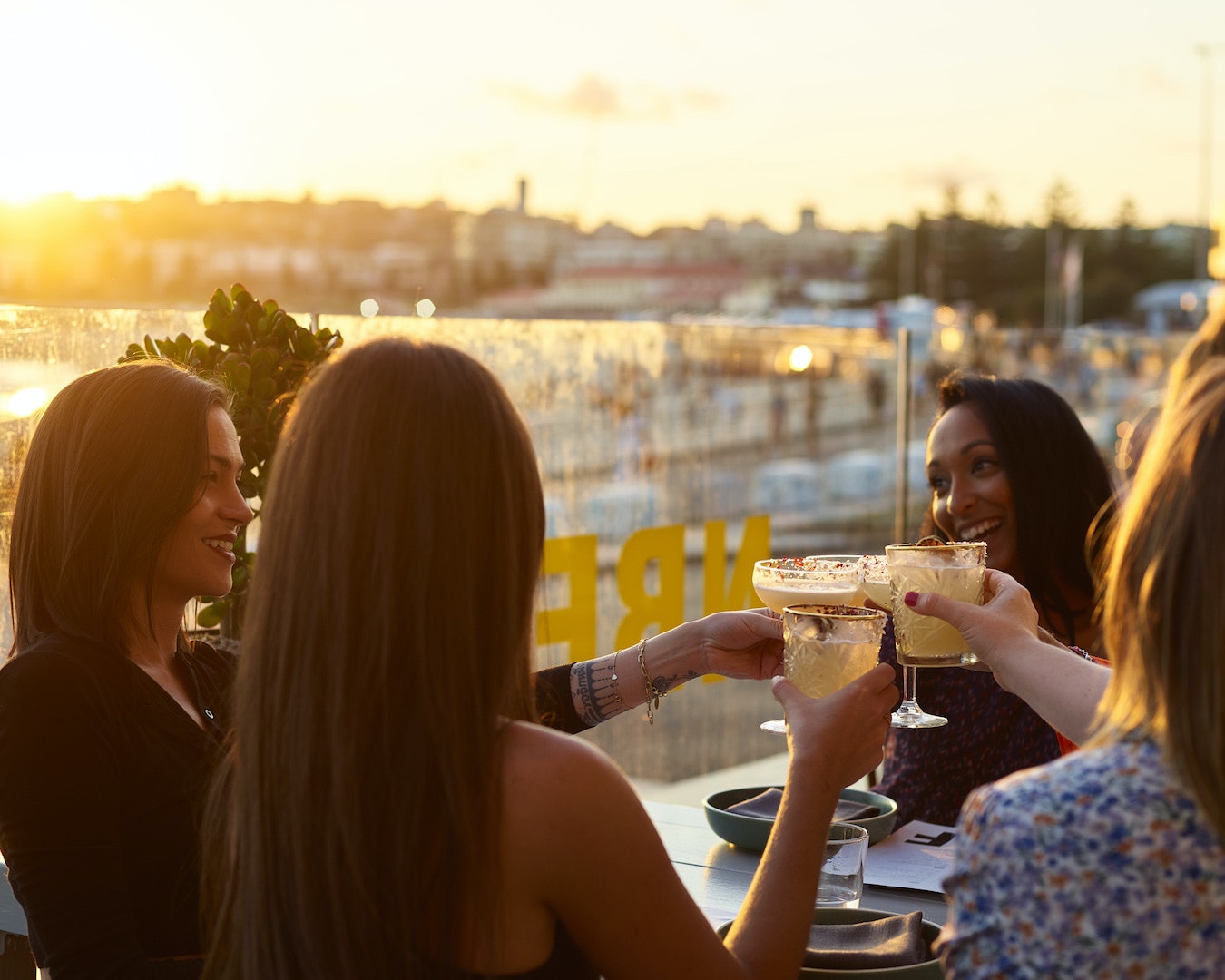 If you’re looking for a new Sunday sesh residency this month, look no further than North Bondi Fish, which has just kicked off a season of afternoon acoustics, beach sunsets and seriously good cocktails. Kicking off at 4pm every Sunday, this week’s line-up includes DJ Aiden Bega and soulful R 'n' B by Rob Edwards. What’s better? North Bondi Fish has teed up the sessions alongside their Summer of Margs special, serving up seasonal sips like the Coco Bongo with pandan and samphire-infused Patrón Silver and the grozen Guavarita. Check out everything going on over here.

If you’re looking for ways to up the ante when it comes to your summer Sunday sessions, Gavroche Chippendale has announced a bottomless rosé series, and we suspect it’ll be almost impossible to resist the enticing promise of a French menu paired with way too many glasses of the good stuff. A special three-course menu with charcuterie, octopus carpaccio, lightly smoked mahi-mahi and an array of delicious sorbet will set you back $98pp, and you can take it up a notch with bottomless French rosé for an extra $50. Bookings are recommended—head over here to make yours. 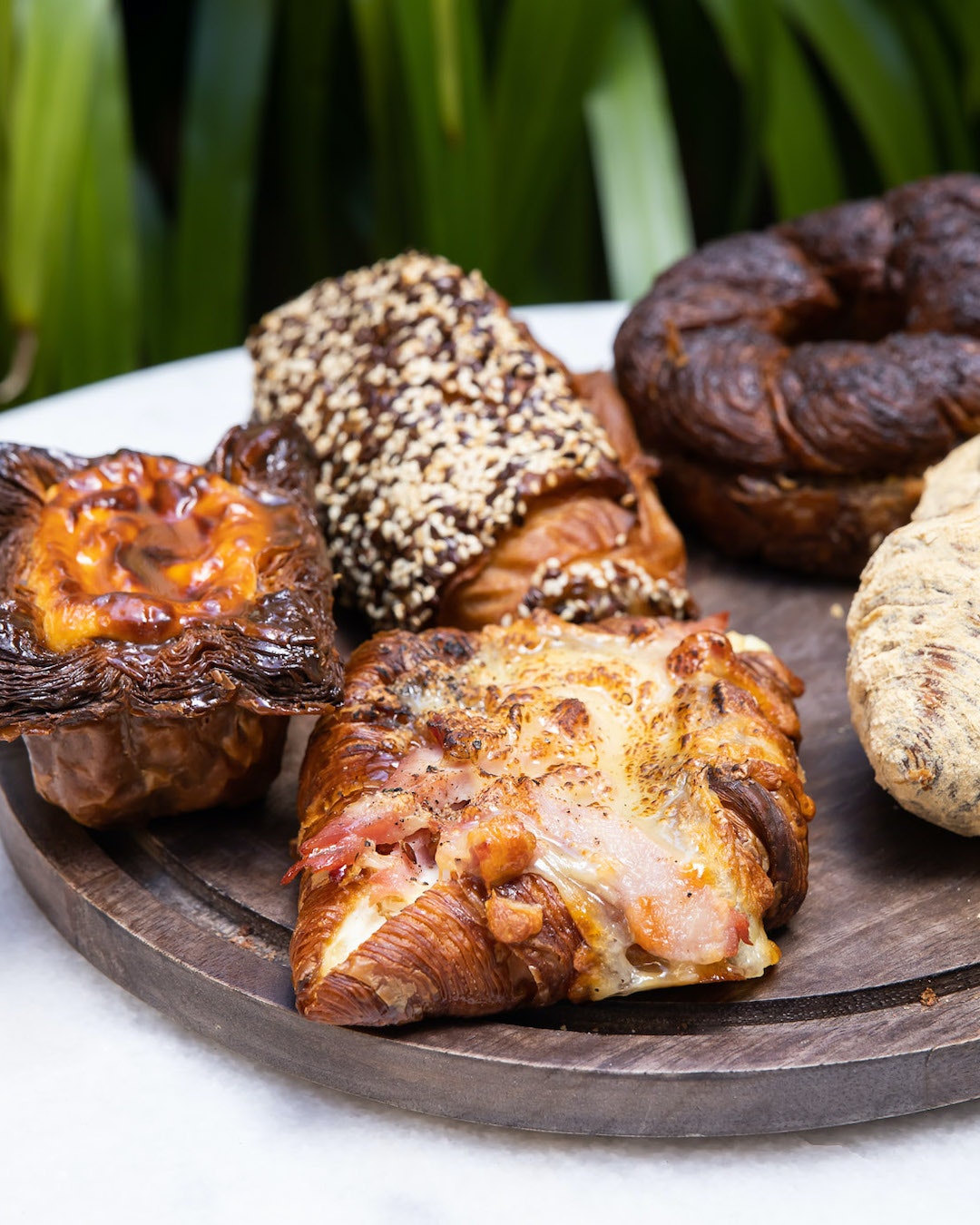 International Croissant Day is fast approaching Monday 30 January, and ASLAN Coffee Roasters is collaborating with  Tenacious Bakehouse to serve up some expertly crafted pastries by Yeongjin Park (formerly of Lode and of Picco Leo). Five limited-edition croissants will be on offer including a Portuguese tart creation with custard cream and miso caramel, an injeolmi (Korean rice cake) treat with soybean powder, sweet red bean paste and vanilla cream, and a black garlic crown with almond cream pastry and black garlic glaze.

Short documentaries, live-action films and animations will beam onto public screens for the 32nd edition of Australia’s largest short film competition, Flickerfest. The 114 shorts chosen from thousands of entries will play alongside specialised comps for under-18s, comedy shorts, romance films, and Indigenous productions. These stories will colour festival screens at 28 sessions across ten days at the revamped indoor and star-ceilinged theatres of Bondi Pavillion. Expect numerous world and Aussie premieres such as Lean, which sees a father and son struggle over an ill-advised sailing expedition to New Zealand in a handmade boat, or Iris Prize-winner Tarneit, a queer narrative of two friends escaping a toxic town. Find single and multi-session bookings here.

This weekend, the Art Gallery of NSW is joining in on the Sydney Festival action with the debut of multidisciplinary performance MONUMENTAL (Working Title). Artists Brian Fuata and Latai Taumoepeau have combined forces with 16 artists from diverse practices to contest the idea of the ‘monument’, and how our society chooses to memorialise. Expect sculptural installations, ceremonial practices, song and aerial dances throughout the weekend. You can see the schedule of activations here. 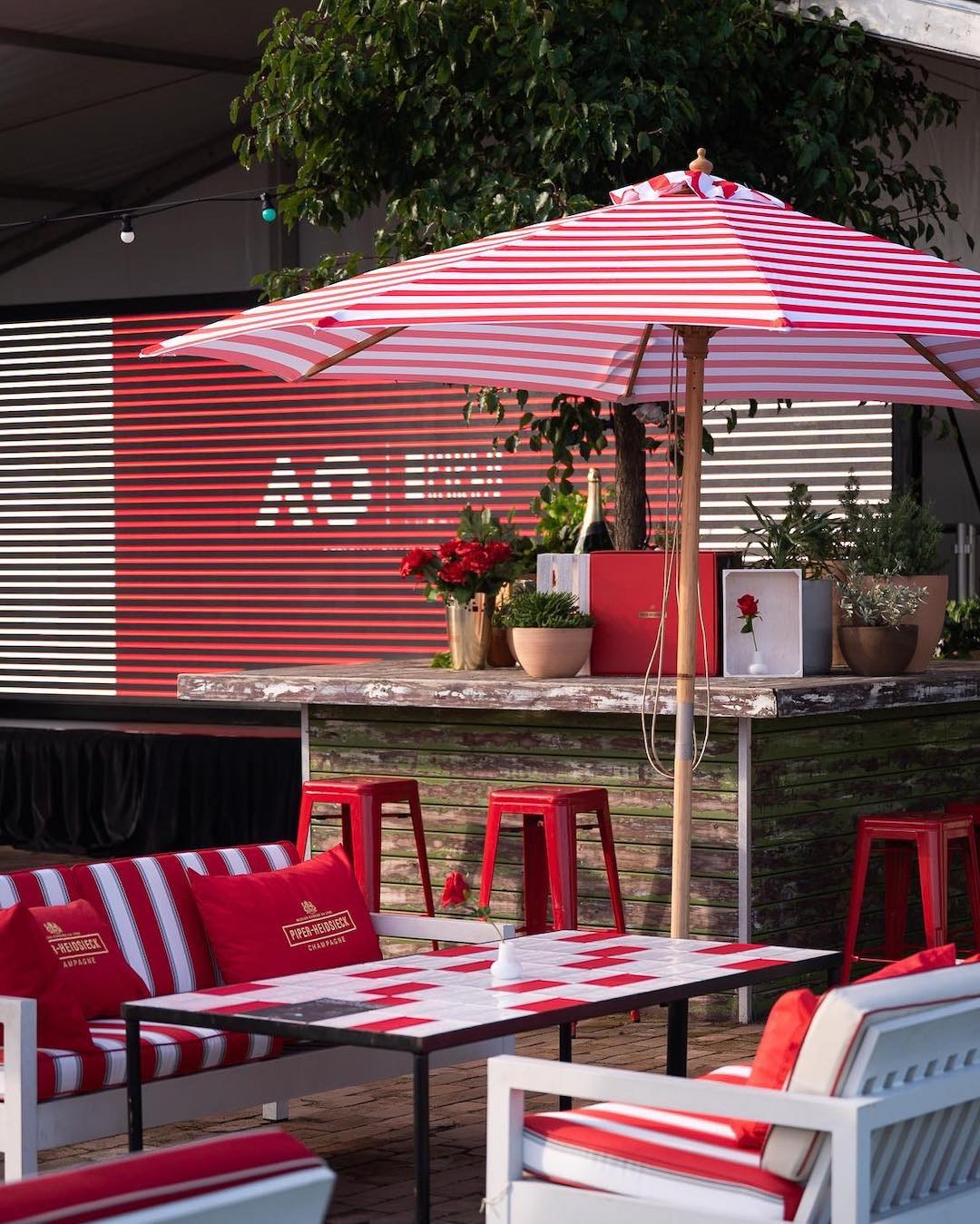 For a fourth year, The Greens North Sydney has partnered with Piper-Heidseick Champagne for its annual Australian Open event, transforming their bowling greens into petite tennis courts and serving up enough champagne to have you think you’re actually good at the sport. Naturally, they’re ramping up celebrations this weekend for the finals, and for $30 per head, you’ll be treated to barefoot games of petit tennis, sip on a glass of bubbles and immerse yourself in the chic pop-up space. Those wanting to keep the party going can opt for a bottle of  Piper-Heidseick for $80 and settle in to watch the finals live-streamed. Head over here to check out the Facebook event.

Gin In The Garden At Botanic House

Exciting news for all gin lovers: Botanic House has partnered with Tanqueray to bring an epic gin pop-up to the heart of the city. The pop-up will bring extended summer vibes with an outdoor bar, lawn games, pre-mixed Tanqueray sips and cocktails as well as a special pan-Asian food menu. Gin in the Garden will run from 2pm, giving you the perfect excuse to clock off from work early and marvel at the sparkling harbour sunset. Check out the event here.

What says summer more than tunes and snacks by the pool? Oxford House is kicking off its OH! Sounds of Summer season in perfect time for the last of the warmer months. Every Saturday and Sunday until March, the hotel will be hosting local DJ sets and artists poolside, which pair sweetly with their lobster rolls, $5 freshly shucked oysters from the oyster bar, and $15 cocktail specials.

Try your coordination on a series of putt-putt holes with fun interactive elements inspired by the stories, characters, and icons from some of Pixar’s most beloved films including Toy Story, The Incredibles, Monsters Inc, and Finding Nemo. You can opt for a nine- or 18-hole experience on the open-air course, and big kids can let their competitive side show at the 18+ after-dark sessions, running between 7pm and 10pm Thursdays-Saturdays (there's even a pop-up bar by Pumphouse). Tickets start at $29.90 for adults, and are available here.

If you’ve ever visited Blossom Bar, you’ll know that award-winning mixologist and founder Grant Collins is the go-to guy when it comes to curating drinks that are equally innovative as they are delicious. This season, Collins has taken it up a notch, collaborating with Red Bull to produce a menu that’s sure to put a pep in your step. From vaporised, deconstructed and restilled Red Bull martinis to Redbull ‘Nitro Puffs’, Blossom Bar’s iconically handcrafted Japanese cocktails will all take on a seriously special twist. Head over between 5pm and 6pm to score their daily happy hour and save some dosh. 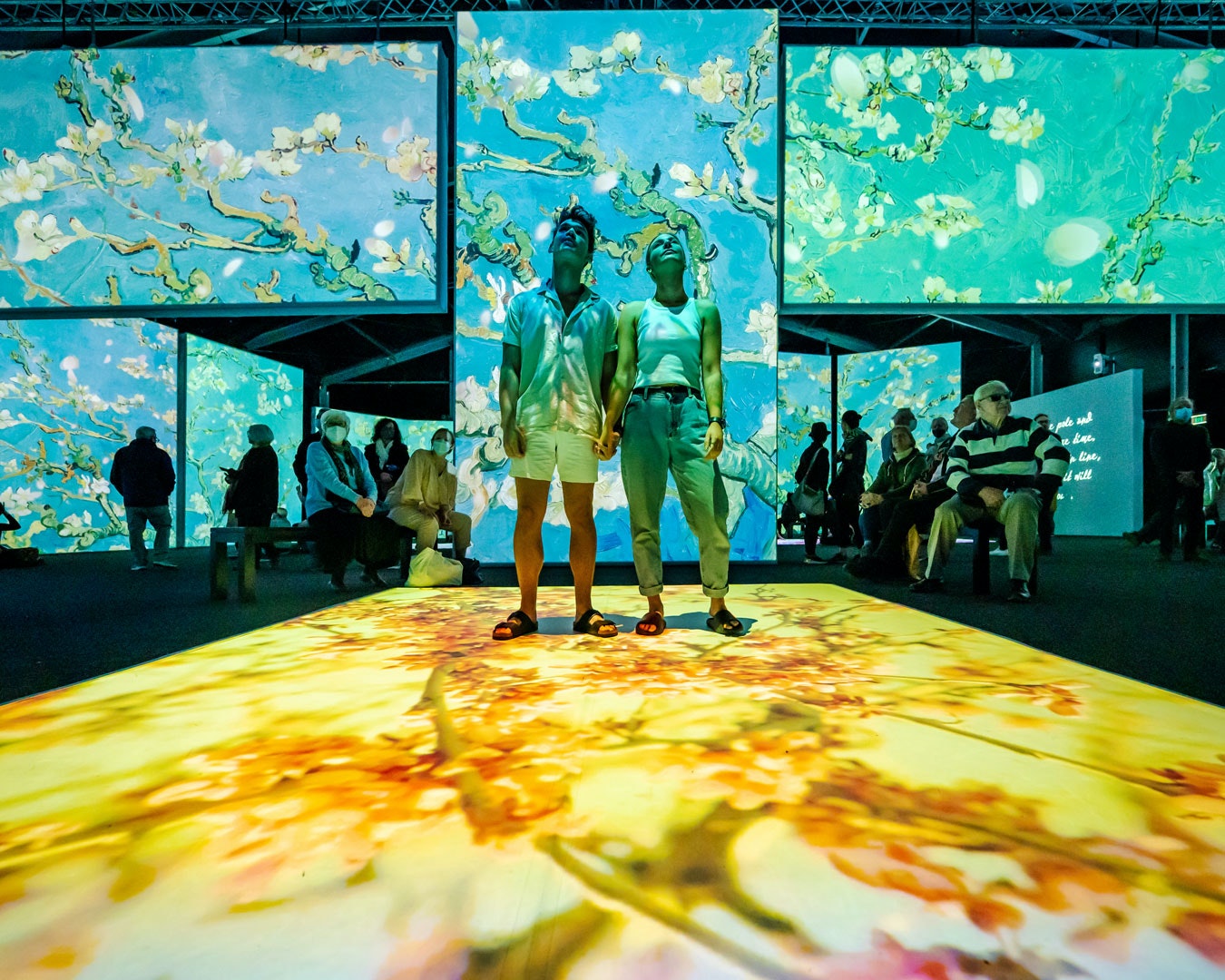 Van Gogh Alive made a huge splash when it debuted in Sydney in 2020. An immersive exhibition where Gogh’s seminal swirls, stars, sunflowers, snowflakes and moonshine drift and dance across walls, just as you imagine the painter would have seen them. This year's version is housed in a purpose-built venue that offers extra rooms and experiences to the original installation. The multi-sensory exhibition features some 3,000 images beamed across walls, floors, ceilings, and more. The projections move in time to music and specifically designed scents fill each space—it's an experience of timeless artwork akin to diving into Van Gogh’s paintings. Learn more and grab tickets from $39 here.

Marvel at a multi-sensory showcase of Australia's vast wilderness at this immersive cinematic experience. Our Country brings together natural history filmmakers alongside the stewardship of Elders, celebrated Indigenous musicians, and creative technologists to explore the natural landscapes and forces of Australia. Their work is displayed on over 40 screens up to six metres tall, with a powerful 360-degree soundscape for complete immersion, and will tour globally when its Sydney stint wraps up. Tickets to Our Country are $34.90 for adults, and are available here.

Need more ideas for your weekend?