6 Epic Chocolate Desserts To Get Your Mouth Around

Chocolate, how do we love thee? Let us count the ways. In desserts—solid or liquid form—at any time of the god damn day. Feelin’ us?

Well, you’re in luck. We’re giving you the low down on the best chocolate desserts on the Sunshine Coast. Sa-weet!

Pretend like you’re in France and head to Le Bon Delice in Peregian Beach to get your hands on one of the best chocolate desserts on the Sunshine Coast—the chocolate éclair. And don’t you worry your little international taste buds, with a French chef heading up the kitchen, it’s the closest you’ll get to Paris without leaving the coast. These pastries are the perfect cover when the BF puts his foot in it with a “We’ll bring the dessert” call.

Luxe chocolate desserts. Is there such a thing? Who gives?! We’re coining it and an image of the decadent Triple Chocolate and Beetroot dessert from Mooloolaba restaurant, Spice Bar is going to sit right next to it. This isn’t no whip, bake and serve dish…this is a chocolate served the fine-dining way. What should you expect? Dehydrated milk chocolate mousse with dark chocolate pave and white chocolate rocks. Then the chef’s balance the flavours, or colour, or something, with beetroot powder, sponge, and sorbet. C’mon, we might not have the food lingo down pat, but we sure know we’re onto a good thing when we taste it, and this has got to be one of the best chocolate desserts on the Sunshine Coast.

You’ve got us! That isn’t the name of an actual dessert at New Earth Café, but they’re all so good (there’s literally nothing bad about them), we can’t pick just one. Listen to this, little healthlings: Raw Chocolate, goji and strawberry cashew cheesecake. Or, chocolate super green mud cake with activated cashews, raw cacao and a bunch of other good stuff, topped with chocolate avocado ganache. Did you even know combos like these existed? Or are you feeling so guilty about last night’s Maccas you’ve already hit the “X” at the top of this page? 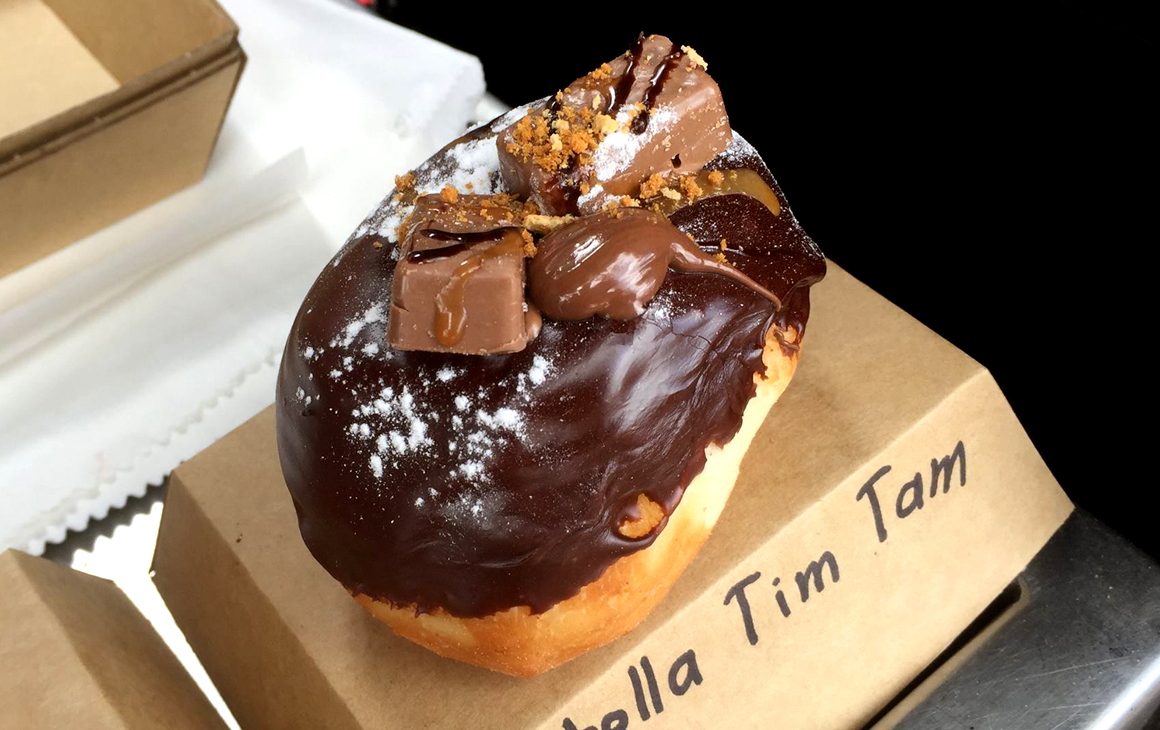 We know it’s a mix of chocolate AND hazelnut but it would be a sweet tragedy if we left Nutella off the list. Especially when it’s drizzled over a donut, that’s filled with gooey chocolate fondant, and topped with Tim Tams. Shut the front door! And then barricade it! You won’t want to share this baby with anyone. Pick up yours up from The Hot Jam Donut Kitchen on Wednesdays and Saturdays at Eumundi Markets, or Friday nights at Marcoola Market!

Is a dessert list even legitimate without a mention of gelato? We’re thinking no! And some of the best chocolate gelato we’ve ever tasted comes from Colin James Fine Foods in Maleny. It may not be fancy, with flecks of Maltesers or peanut fudge, but when it’s as smooth and creamy as this, distractions are the last things you want. #getinmybelly

So, you’ve got a special occasion and you need a beast of a chocolate-y cake? Stormie.D’s Cupcakery in Caloundra is making epic cake towers that you won’t be able to close the lid on, literally. Order as you will (but the choc mud red velvet cake with peanut butter frosting looks insane) and then when you drop in to pick it up, smash back one of Stormie.D’s choc mint #epicshakes. Holy chocolate! Did we miss your favourite chocolate dessert on the Sunshine Coast? We’d love to hear from you!