Take your startup to the next level with Delphi Bank’s expertise and tailored financial solutions.

When we think of start-ups, we think of Silicon Valley. Facebook, Twitter, Instagram—all the tech businesses that make appearances in our everyday lives.

So, what if we told you about a Sunshine Coast start-up that’s just as impressive and, even better, it’s on a mission to help Australian charities with their causes?

Founded by the Sunshine Coast’s Duncan Barker, Near Field Creative is the start-up you need to know about. Launched in 2018, Near Field Creative designs wearable technology. What does that mean? Well, hold your phone up to a logo on a shirt or uniform worn by a charity representative, and you will be transported to a custom-designed portal for that particular business, where you can grab more info or make a quick, cashless donation.

Most recently, this life-changing wearable donation technology has been incorporated into puppy jackets for Guide Dogs Queensland—allowing the public to approach and engage with the dogs for the first time in many years. How cool is that?

Duncan took time out of his fast-paced business to lay it all out for us, taking us behind the scenes of what a start-up is really like, the things he’s learned along the way, and what makes the Sunshine Coast such a special place for budding entrepreneurs. 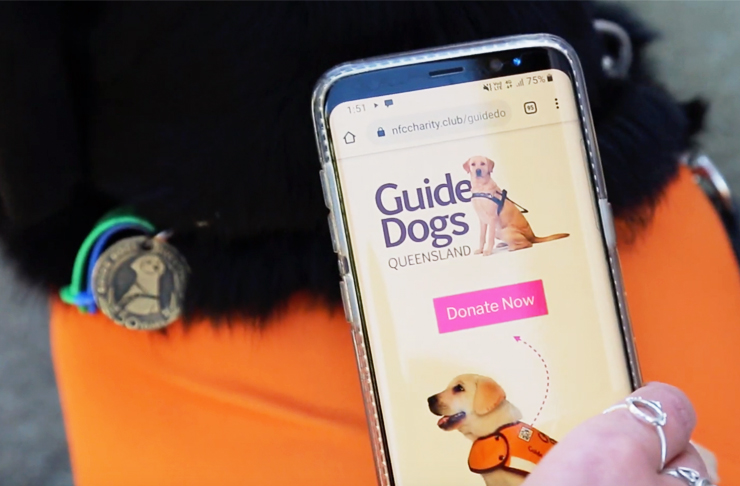 Take us back to the start. What were you doing before you launched your own start-up?

I grew up on the Sunshine Coast, moved to Sydney as a result of a job offer with a hotel chain which deferred my university studies in exchange for an experienced-based education. I spent seven years in Sydney and three in Brisbane working across hotels, real estate and internet companies. One of those was Australia’s first Group Buying Company and my first-hand experience joining a start-up that had been purchased for $40M in its 10month of operation, then shutdown one year later. Despite joining in the final year and experiencing the turbulence—the excitement, the people and the passion was contagious.  A couple years later, I had a side-hustle that suffered from what we will call developer fatigue and a big part of my move back to the Sunshine Coast was to commit fully to building something based on my passions for technology and people.

In a nutshell, what does Near Field Creative do?

We’re on a mission to help charities reduce their fundraising costs and empower their volunteers by connecting their uniforms and ID cards to an online donation portal we designed, which enables cashless, mobile phone-based donations anywhere, instantly. We’re also working with a major sports club to drive fan engagement through a range of high-tech merchandise being rolled out next season.

Where did the idea to create a business from wearable technology come from?

I started with a clothing label and on a trip to Sydney a friend of mine brought in an LED t-shirt that he’d bought in the states. It has a battery pack attached and an EQ meter on the front which would react to music when activated. He’s purchased it in the US and a conversation about the future of merchandise ensued. At the time I was inspired, but thought there would be no way I’d be able to integrate technology into clothing, let alone for any real purpose. That thought drove me to look at trends and to start testing what was possible. Fast forward to now and we have a product that can affixed to multiple garments, which requires no apps, works with approximately 80% of phones on the market, links to an online platform we custom design and process transactions through, and have the support of some of Australia’s biggest charities.

My experience as a start-up is that you have many moments where you believe you are onto something special, but you learn very quickly that the real ah-ha moments have to come from your potential clients and your investors. People have incredible ideas and they build those into incredible inventions and innovations many of which never make it past that early stage, because their ah-ha moment wasn’t shared with the market or simply didn’t fill a need. I’ve learned that you need to celebrate the moments you consider special, but validate them by ensuring your customers think they’re special too.

As such, an early special moment for me was the reaction of a 10-year-old drum student of mine where, during the testing stage, I embedded a video of him playing into a t-shirt and gave it to him as a gift. His reaction was priceless. More recently, the reaction and subsequent investment from Leanne Kemp, Queensland’s Chief Entrepreneur, and The Salvation Army’s support and rollout of our technology at their Red Shield Door Knock Campaign.

What’s one of the biggest hurdles you’ve faced in the business and how did you overcome it?

One of my biggest hurdles early on was simply overcoming my own desire for where and how the product would be adopted. Relinquishing this attachment is both liberating and disheartening, but a requirement for success and the result of this changed has created a purpose for our products that far exceeded any initial expectations.

Funding is a major hurdle for start-ups, how did you secure the capital to delve into wearable technology?

My start-up plan was specifically designed to reduce and mitigate the risk associated with start-up failure. You hear it all the time, 90% of start-ups fail and funding is noted as one of the top reasons, so from the outset my strategy was to create a business with very few overheads, a light but effective technology stack and low cost product, and a focus solely on product-market fit through iteration and failure and customer acquisition.

As a result, rather than pitching a concept, the story we were telling was all about how much risk we had removed, that we had early-stage customers with a product working and in market, extremely low overheads and a global market potential. An introduction to Leanne, from Everledger, sparked a conversation which evolved quite organically into an investment.

Some of the biggest misconceptions about start-ups are...

That you need big investment to get started—never before have we had such incredible access to so many high quality technology platforms and services for so little. That you need patents to secure investment—you need investment to secure patents. That you need to have previous experience in the market you are trying to launch into—an outsiders point of view can help bring fresh ideas by questioning the status-quo.
That being a solo-founder is a bad idea—sure, it’s tough, but making lightning fast decisions is a huge upside when you’re in the early stages.
That you can’t compete with or win big brands as clients early on—if you get the fit right and can communicate the ‘why’, the rest is persistence.

What’s your advice for those looking to launch their own start-up?

Prepare yourself! Like really prepare yourself. It’s an exciting adventure into uncertainty, it’s a quick way to be exposed of your weaknesses and strengths, it’s insightful in so many ways and you gain access to some of most brilliant people that you would never have crossed paths with through a mainstream career path.

You returned to the Sunshine Coast after years of living in the big smoke. What drew you back and what are you loving most about the start-up world on the Coast?

I grew up here, my family are here and I came back to re-assess what I wanted to do and where I wanted to be based. There was so much talk about the impact remote working was having and how businesses can be run from a laptop when I was working in the corporate world and I thought I’d put that to the test. What better place than the Sunshine Coast to make that work.

One notable point about the start-up eco-system is that the quality of talent. Because of the lifestyle, the Sunshine Coast tends to be home to some incredible executives and as a result of the stage they are at in their life, start-ups have access to world-class mentorship.

Finally, what’s next for Near Field Creative?

I’ll be cliché and say watch this space. We’re constantly refining what we do and exploring new applications both across broader markets and within those that we operate, so it is worth saying keep an eye on us but there are certainly a few really exciting and super cool collaborations we have in the pipeline around fan merchandising experiences that have been bubbling away for some time.

To find out more about Near Field Creative, click here.