If you’ve farewelled 2015 in a blaze of unfulfilled resolutions and a frustratingly large list of to-dos, well, you better clean up your act, slacker. <insert winky emoji>

Eff the Year of the Monkey (what did he ever do for you anyway?), 2016 is the year of LIFE OPTIMISATION, people. Because it’s in caps, you know we mean business.

Aaand because it’s still only January (WTF, Christmas is less than a year away?!!) you’re safely in the haven’t-even-thought-twice-about-your-resolutions zone, so no stress, eh?

Whatever you had on your list was probably useless anyway, so take heed, use the remaining 300-something+ days to tackle this “all-important” list of life skills to master, and become a real adult. (Pfft, whatever that means.)

Your excuses aren’t valid here; you need to add changing a tyre to your list to unlock full car-driving adult-level. Not only is it super simple, but it also means that you won’t have to wait for ages for your mum, dad, housemate or RACQ to rescue you from the side of the road. Depending on how and where you procured your vehicle (legally, we assume), there should be a guide to changing your car model’s tyres in the glove box, so that’s a good place to start. There’s some basic equipment you’ll need like a jack (to suspend the wheel off the ground) and a wrench, and the most important of all, a spare tyre. Duh! Check out this nifty guide to changing your tyre and may your driving be smooth and your wheels always full!

Since the dawn of time (well, before the Google Age and video tutorials), successfully and calmly folding a fitted sheet has been one of life’s greatest mysteries. Your Nana and her CWA dark arts notwithstanding, it’s the great leveller; presidents and plebs alike have all fallen prey to the dastardly fitted-sheet conundrum. Can one ever fold it, truly? Is it even a sheet? How will I ever get through this linen-filled hell? All questions every person has asked at some point. Before crumpling said sheet into a ragey ball and shoving it right to the back of the linen cupboard. If you don’t have a nana handy, then check out Queen Martha’s guide to folding a fitted sheet. This is why Google was invented, right?

There’s nothing like a limp and uncommitted handshake to leave a bad first impression with new acquaintances, and whether you like it or not, a handshake is the ultimate non-verbal cue for a bunch of psychological traits. It’s not just for the corporate world either; no matter your industry, walking around flailing your weak excuses for hands at people is not going to get you anywhere in 2016. Or any year, for that matter. We aren’t encouraging shirt-front levels of aggression, or that you attend the Mark Latham school of handshakes, but at least grip the person’s hand like you mean it, make eye contact, and don’t snatch your hand away (or wipe it off) after you’ve disengaged. Shake it like the #boss you are, you good thing!

Mastering the art of meditation

In 2015, the concept of mindfulness came up a lot. Maybe it was because, as a culture, we found new levels of rage previously unavailable to us (thank you Apple, for unleashing El Capitan onto our otherwise uncomplicated lives; things were just too good). Or perhaps it was the proliferation of apps focussed on using this Zen-like, yogic technique to step out of the constant stream of tech-driven madness by getting more in touch with our mobile devices own inner-peace. Scepticism aside, the prevailing science is clear: meditation works and it can help make the rest of your life better, more fulfilling, and rewarding. BUT before you book into a year’s worth of vipassana retreats, know this… like anything that’s worth mastering, it takes practice, and perseverance, so don’t expect Insta-nirvana. Go with the flow, young master.

Splurges and credit card abuse be gone: 2016 is the year you nail “The Budget”. It needn’t be a dirty word either; there’s something weirdly liberating in restricting yourself to spending only a certain amount of money every week/month/year. Think of it as the KonMari approach to money. Sure, you won’t be splashing cash around the place like some kind of uncapped oil pipe (no more drunken cocktail shouts for you and 30 of your closest friends at 3am) but you’ll be amazed with the lack of anxiety over money when you have all your bills paid on time (shock!); your fridge is full of food you want to eat (no takeaway?!); and you can finally buy that expensive dress or pair of shoes guilt-free because you’ve sensibly saved the dosh without forsaking one, or more, of life’s necessities.

Fingers, say hello to CTRL or CMD + and get ready for your work day to become A LOT simpler. Thanks to the miracle of modern computing you can do almost anything with keyboard shortcuts and there are plenty of guides out there to tell you how, so school up, you neanderthal. A good place to start? Those detailed product introduction videos that Apple and Microsoft produce along with each new version of laptop or phone they release. Who knew they were actually useful? Enlightening to say the least. That way, when a colleague or friend exclaims in surprise that they’ve just found out how to insert an umlaut or French accented “e” without using the mouse, you’ll just shake your head knowingly. Because you are only a little bit of a know-it-all.

Once just the domain of suave, slightly sexist suited and booted spies, and 1960s Madison Ave ad-execs, the signature cocktail is more than just a simple drink: it’s your calling card. An extension of your personality and a definitive statement to the world, it’s something you both drink and know how to whip up with aplomb. From a Singapore Sling, a classic Manhattan, or a simple Tom Collins, the world is your oyster (in a Bloody Mary, of course) when it comes to finding one that speaks to your idiosyncrasies and individuality. Now for the all important question: shaken, or stirred? 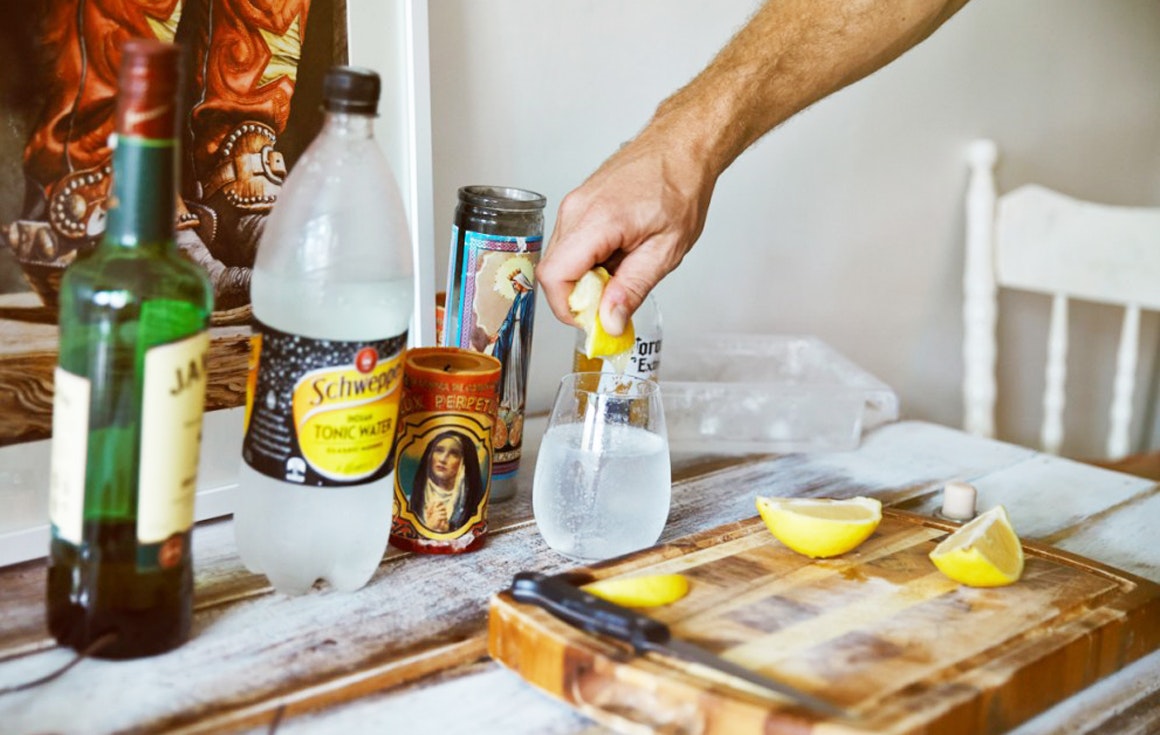 The art of listening

Having a real, meaningful conversation is often a rare thing, despite the amount of talking that most of us do. And although it may seem like a contradiction, the secret to conversing properly, is actually listening. That means shutting that blabber-mouth of yours and rather than thinking about what your next comment will be (a funny anecdote with you as protagonist, perhaps?), concentrating on the story, and where it is going, before then asking a question. You’ll find yourself engaged with people on a much deeper level than just what you have in common, and they’ll feel more at ease and comfortable with you as a result.

Having a failsafe dining repertoire to fall back on

If you are one of those people for whom cooking and/or hosting a dinner party is on par with a military operation, then get ready, because 2016 is your year! Despite what MasterChef, My Kitchen Rules, and the huge back catalog of Kitchen Nightmares (aka Gordon Ramsay swearing his tits off on national TV) will tell you, cooking is really not that hard or mystical. It all comes back to having a core set of recipes, easily made from simple ingredients without having to spend hours in the kitchen. Think of this as a very basic formula: protein + greens + (accoutrements x seasonings) = success. Now apply that to a real world situation: chicken + green beans + (lemon x butter x garlic x almond slivers) = pan fried chicken with lemon, and garlic butter sautéed green beans with toasted almonds! Huzzah, culinary genius. Having a strategically stocked fridge and pantry is the secret but if you are looking for inspo, hit up websites like Food 52 or Bon Appétit who know how to nail simple cooking. (Note: Lemon, olive oil and salt are the cornerstones for homemade dressings and sauces, and can make almost anything taste good.)

A rock hard avocado got you down? Well have we got a magic trick for you! Put it into a paper bag with an apple, banana or piece of corn and hey, presto, perfect green ripeness, sometimes as quickly as overnight. Okay, you got us. It’s science not magic; some fruit and vegetables contain ethylene a naturally occurring gas involved in the ripening process, so putting the two in close proximity, speeds up the process. Life is full of simple pleasures and cutting into a perfectly ripe, unbruised avocado is damn high on that list.

Just like the lost art of letter writing (can you even use a pen or pencil anymore?), sending thank you cards may seem like a charming, slightly antiquated old-world nicety, but we’re all for it. We draw the line at sending thank you cards to someone’s thank you card (yep, talk about uber-polite!) but we think there’s too much emoji-based gratitude and not enough IRL. Get yourself a nice set of stationery, some good pens and express your gratitude through the written word. It can be for something as simple as a coffee date, an invitation to a wedding or birthday, or as life-defining as an interview; whatever the reason, express yourself.

Origami or adult-colouring books aka switching off

Loosely related to meditation and mindfulness, origami and adult colouring books sit firmly in the “trends that seem ridiculous and pointless, but are actually really good” camp. We all scoffed a little when the colouring book thing, well, became a thing. And then we tried it. You’ve probably forgotten the feeling now that you’re officially a grown up but remember how good it felt to keep those pesky colours inside the lines when you were a kid? Well, it feels just the same now, with the added benefit of taking your mind off myriad woes, stresses, and anxieties (however first-world they may be) and helping you to seriously de-stress in our hyper-connected world. The same goes for origami, or any highly-detailed creative activity (pottery, jewellery-making, floristry), because the sheer concentration required naturally shuts off your irrational, overactive brain.

How to say no without the guilt

We aren’t suggesting you say “no” all the time, rudely, or to something you actually want to do. But it’s easier said than done without feeling guilty or over-analysing the effect it will have on your relationships, work, or otherwise. If you ain’t got time for feeling frazzled, stressed and like you can’t get a handle on anything then this life skill is your jam for 2016. Check out these polite but pointed templates for real life situations, and say those two little letters without offending anyone this year!