Silent Comedy Is Coming Back To The Yarra Next Month

You’ve heard of silent discos, right? A bunch of people wearing dorky headphones, dancing like nobody’s watching to music only their souls can hear? Well, Silent Comedy is pretty much the same thing. Just replace music with sarcastic gags and zinging one-liners.

Welcome to the cutting edge of the comedy scene: 30 people sitting outside at Abory Bar & Eatery, laughing their asses off in total silence, while puzzled commuters and passing Metro police wonder what the hell’s going on. Here’s how it works: the performer’s mic is hooked up to luminous blue headphones on your noggin’ (via Bluetooth–classy) which makes everyone look a little like they’re being mind-controlled by an ominous force. They say jokes, and you laugh at them. Simple. 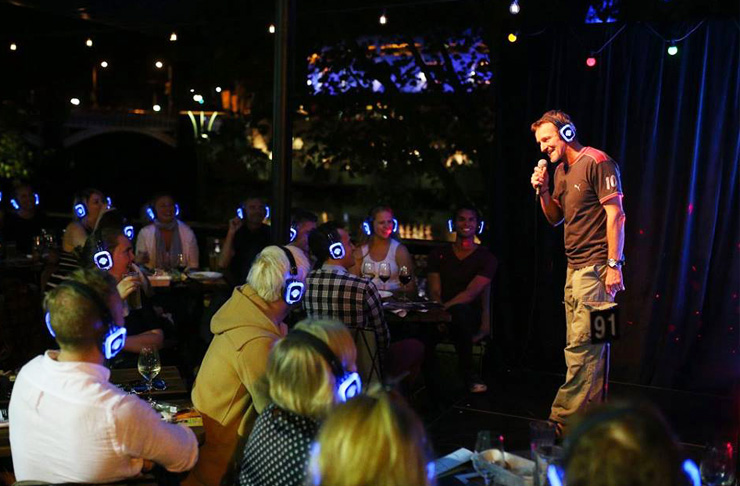 After selling out the last two years at Melbourne International Comedy Festival, Silent Comedy is back for its third year running. There’ll be a rotating list of A-Grade talent, including Jimoen, Bev Killick, Sam Taunton and Dolly Diamond. The pick of the bunch though might be Jacques Barrett, a Melbourne comic with Big Future written all over him. Keep an eye out too for Simon Taylor—absolutely slayed it last year.

Tickets are $25 bucks. That gets you three comics, some headphones, and about 15 confused glances from passers-by. Bargain.