Let’s face it, when you’re taking a break, where you stay can make or break your holiday. And, when it comes to the City of Sails, we have got it going on. From luxurious hotels with spectacular views to inner-city boutique gems, Auckland has it all. Whether you’re coming to Auckland for a holiday, or just need some time to get away from home and have a little retreat, these world-class accommodation options combine with premium services and facilities to set you up in the utmost luxury. From boutique to boujee to five-star luxury we've scoured town for la crème de la crème, so without further ado, here are the best hotels in Auckland. 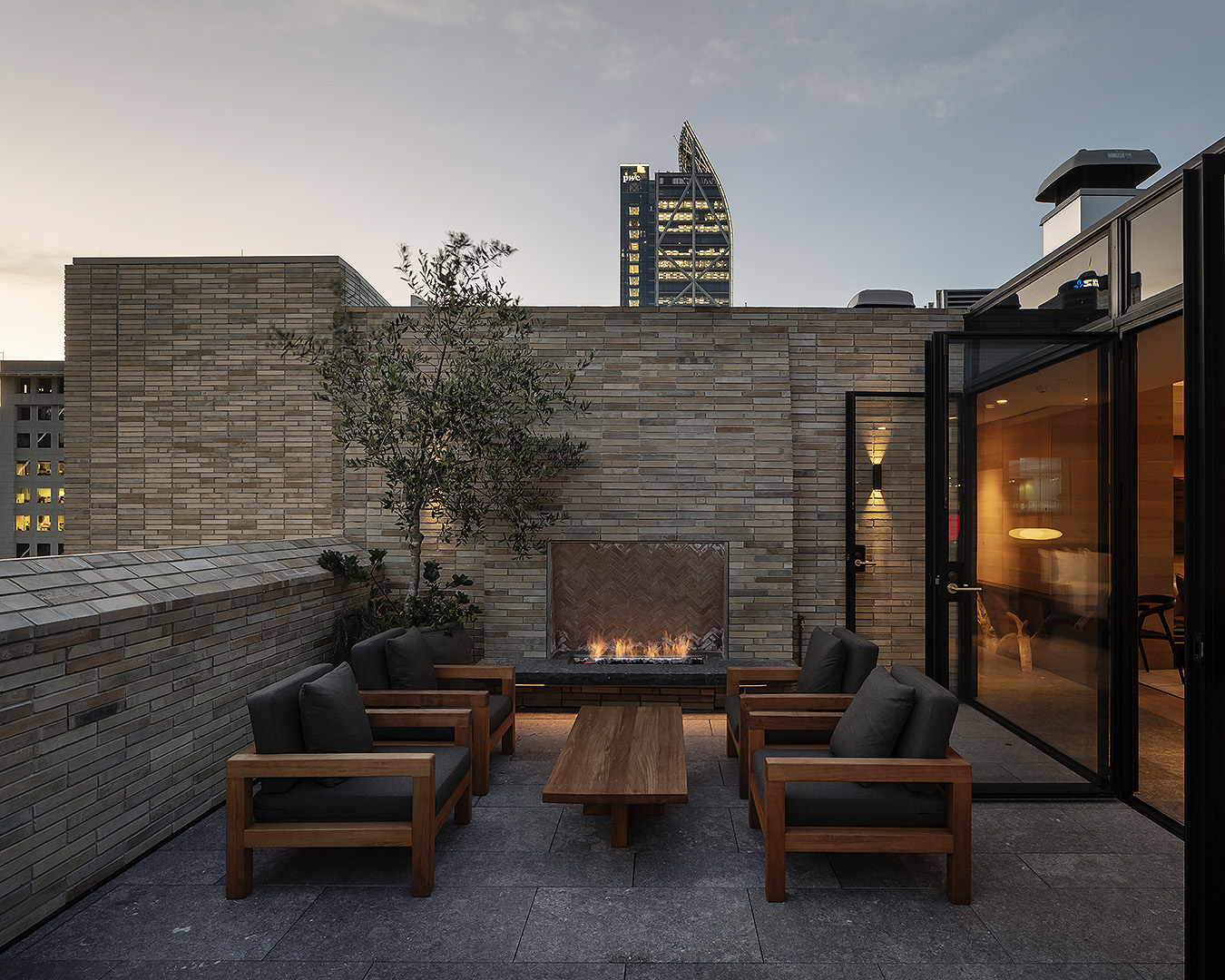 Fancy staying in one of the world's best new hotels? Then better book yourself into The Hotel Britomart, which recently nabbed a spot on the prestigious Conde Nast Traveler's 2021 Hot List (the only hotel in NZ to do so, and one of just two in Australasia). Of course, there was never any doubt in our minds that it would make the cut. From the unique brick-clad exterior to stylish timber-lined rooms complete with beautifully tiled bathrooms, hand-made ceramics, built-in couches and minibars stacked to the brim with local goodies, you'll certainly be living your best life when you stay here. Plus, you'll have the bragging rights of staying in New Zealand's first-ever Five Green Star hotel. This is no mean feat, and has been awarded to The Hotel Britomart for its unwavering dedication to sustainability practices throughout the design and build process, which amongst other things has included the use of environmentally-friendly finishings, responsibly sourced timber and even taps and fittings that reduce water waste. If you can pry yourself away from your room, be sure to make use of Britomart's amazing bars and eateries which include Kingi, Mr Morris, Café Hanoi, Ostro, Ghost Street, Caretaker and Miann—as well as the billion-dollar Commercial Bay development just a short stroll up the road. 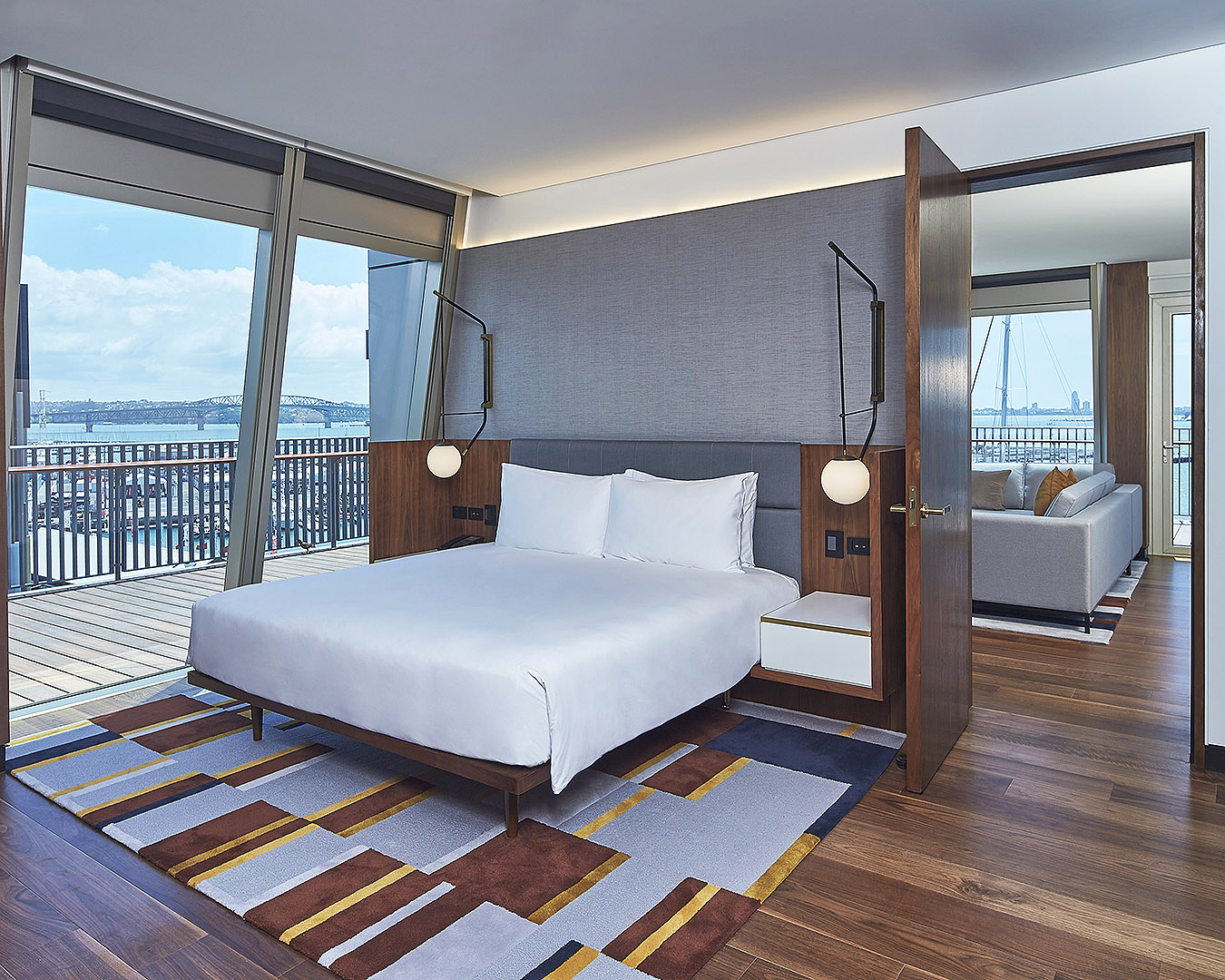 The Park Hyatt Auckland, where to even begin? Let's start with the incredible location—smack bang in the middle of the Viaduct, in the spot where Emirates Team New Zealand previously had their base. Those sweet waterfront views become something next level when enjoyed from the Park Hyatt's range of exquisite accommodation options, which include a new collection of speciality rooms such as the Presidential Suite (the largest hotel room of its kind in the country, weighing in at a whopping 370sqm and complete with sweeping city vistas, wrap-around balcony, internal courtyard, personal gym, full-service kitchen and our personal fave, a baby grand piano). And these guys are legit experts in the field of food, with a myriad of world-class dining options for you to choose from without even leaving the hotel. Tuck into top Kiwi kai at the beautiful Onemata—indulge in afternoon tea at The Living Room—sink a tipple or two in the classy Captain's Bar—or grab your coffee and pastry fix at The Pantry. If you're looking for a staycation you'll be talking about for years to come, this is the spot. 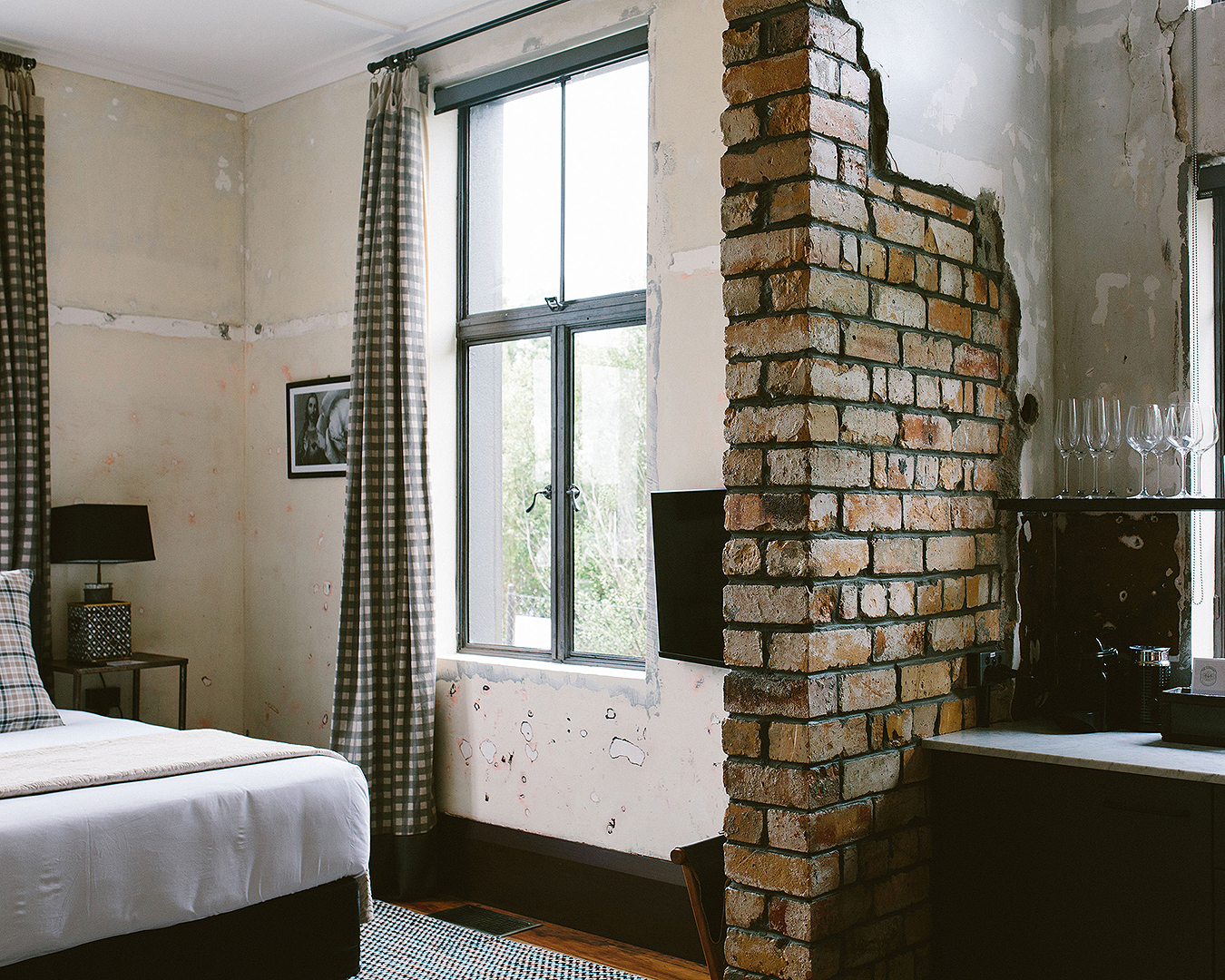 Convent by name, convent by nature (well, sorta). This beautiful, 22-room converted nunnery in Grey Lynn is steeped in history (it was constructed all the way back in 1922!) and oozes character from every nook and cranny, making it by far one of the most unique—and in our opinion, memorable—hotels in Auckland. Big thumbs up to the design crew for staying true to the building's original Spanish mission house-style architecture (think ornate ceilings, stucco arches and vast steel windows), which is tastefully offset by all the usual mod cons. Plus, it's a nearby walk or cheeky Uber ride to the respective foodie havens of Ponsonby and K' Rd—though we wouldn't blame you for staying in, considering The Convent is also home to the incredibly delicious Italian-inspired eatery (and Urban List fave), Ada. 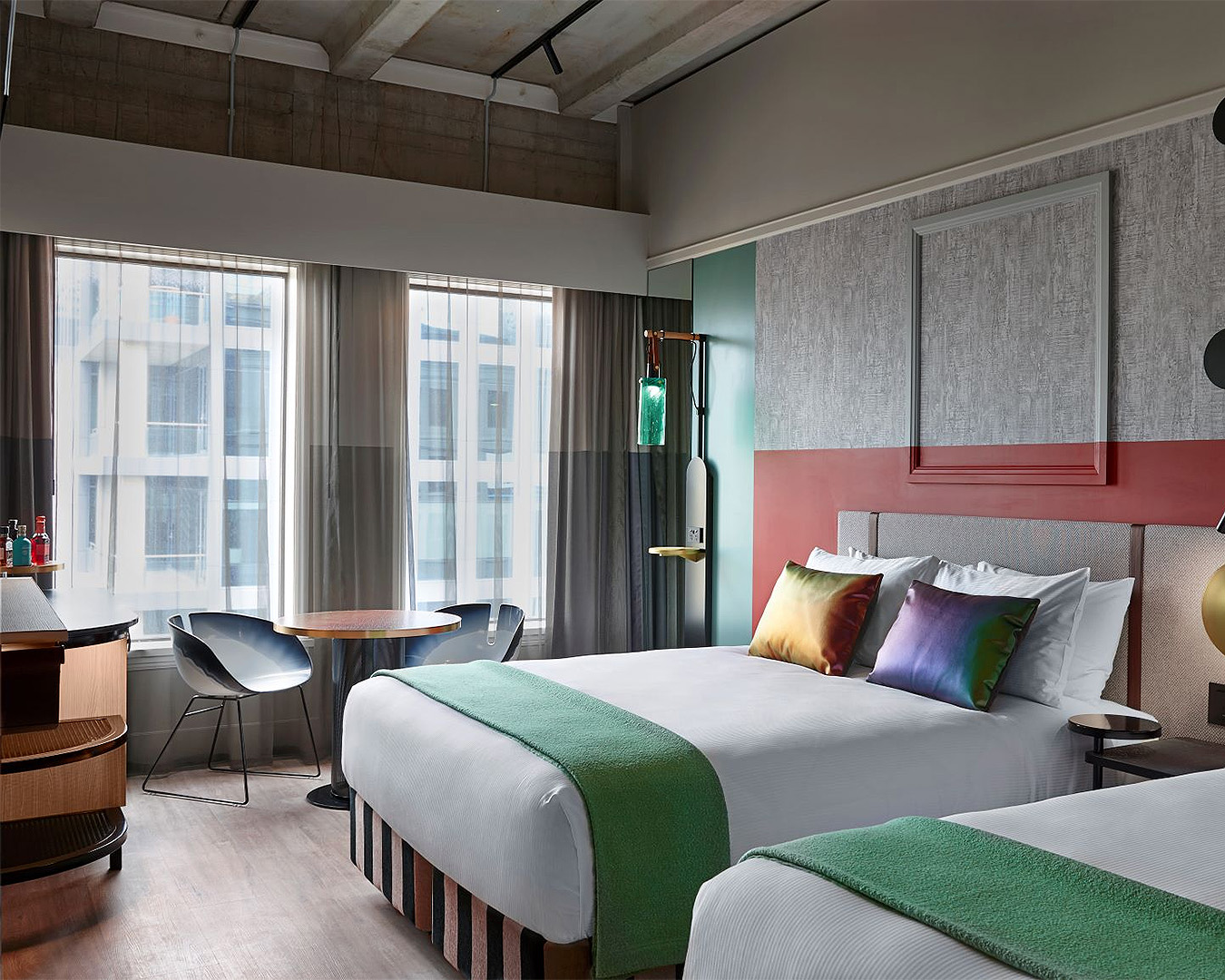 Fans of QT will know that these guys bring a serious injection of fun and flair to each and every one of their sites, and Auckland's QT Hotel is no exception. You'll find this quirky gem in the heart of the city at 4 Viaduct Avenue, where a world of bold and striking aesthetics and rooms that eye the sparkling waters of the Waitematā await. In fact, designer Nic Graham drew inspiration from the ocean (oysters and oyster trawlers, to be precise) when creating the fit-out. While you're here, it would be an absolute abomination not to enjoy a meal or two at Esther—the latest venture from renowned chef Sean Connolly, serving drop-dead delish Mediterranean fare in the form of anchovy crostini, lamb with labneh, and baked Basque cheesecake, followed up with a couple of cheeky drinks at Rooftop At QT. Perched six storeys above the Viaduct, this stunning space will have you living out your boujee dreams in style with mezze platters, espresso martinis and a rotating guest cocktail on tap. 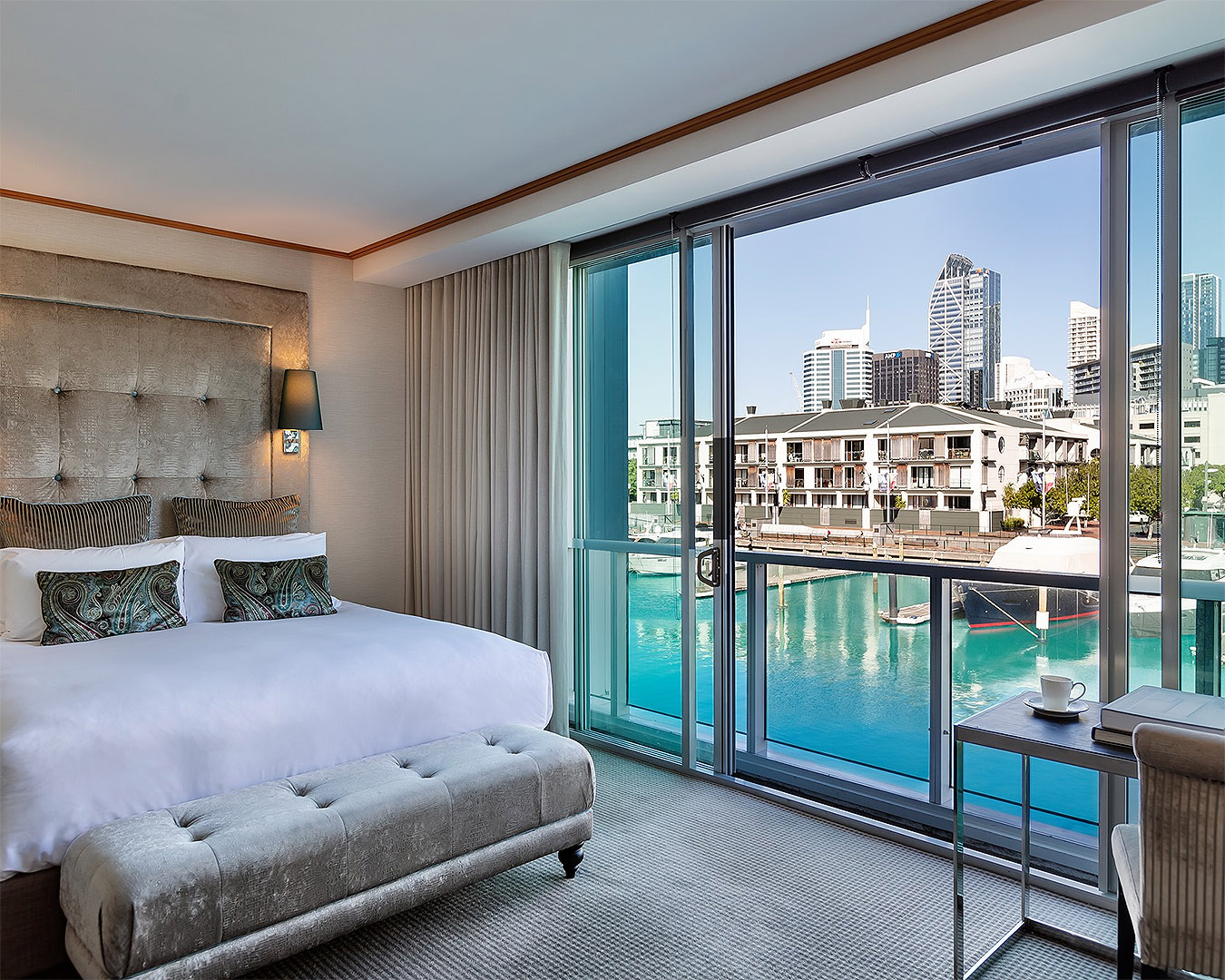 Fine dining restaurants, high-tea, continental breakfasts, a relaxing spa with the finest massage therapists and luxurious rooms—Sofitel Auckland Viaduct Harbour has it all. Offering a range of packages to ensure you get the best out of your Sofitel experience, this hotel makes it hard to find a reason to leave this sanctuary. The range of rooms begin at Superior and go all the way up to the Prestige Suite. Although these different forms of accommodation offer a little something different, they all have a consistent theme of elegance which creates an ambience of sophistication. Better yet, it’s all complimented with a view of the waterfront. And you definitely won't go hungry, with the hotel home to an amazing seafood-inspired eatery called La Marée, which serves up incredible locally sourced kaimoana and produce with a French twist. And don't forget to check out Sabrage Champagne Bar, where you'll be treated to creative cocktails, artisan cheese boards and the freshest oysters. 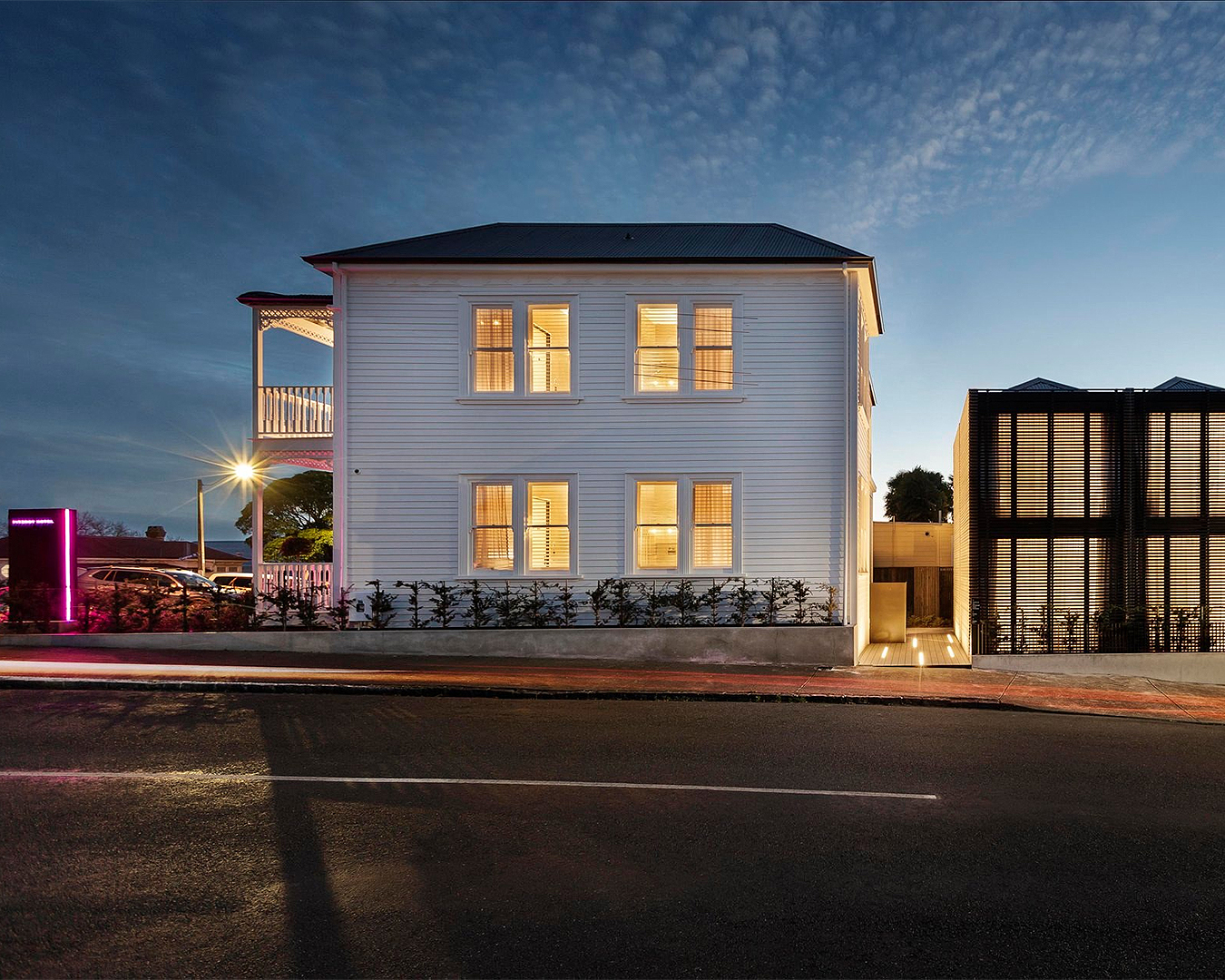 The name of this one alone exudes luxury and prestige, wouldn't you agree? Hotel Fitzroy is certainly a fine place to staycation, and oozes boujee with just 10 suites set across two buildings—the original villa, circa 1910 and a newer, more contemporary build right next door. Both have been beautifully curated with the finest furnishings (and, wait for it—a complimentary mini-bar that's replenished DAILY), so you can spend your time here living like a legit Ponsonby prince, or princess. There's no on-site restaurant but what there IS, are refreshments and hors d’oeuvres served in the hotel library each evening, two barista-made coffees a day, and an epic in-room breakfast service that will blow your mind (all complimentary). However, if you're looking for more ways to fill your belly, the many bars and restaurants of Ponsonby are practically on your doorstep. And if after all that you're still not convinced how epic Hotel Fitzroy is, know that Taika Waititi booked out the entire place for a week shortly before it opened late last year. 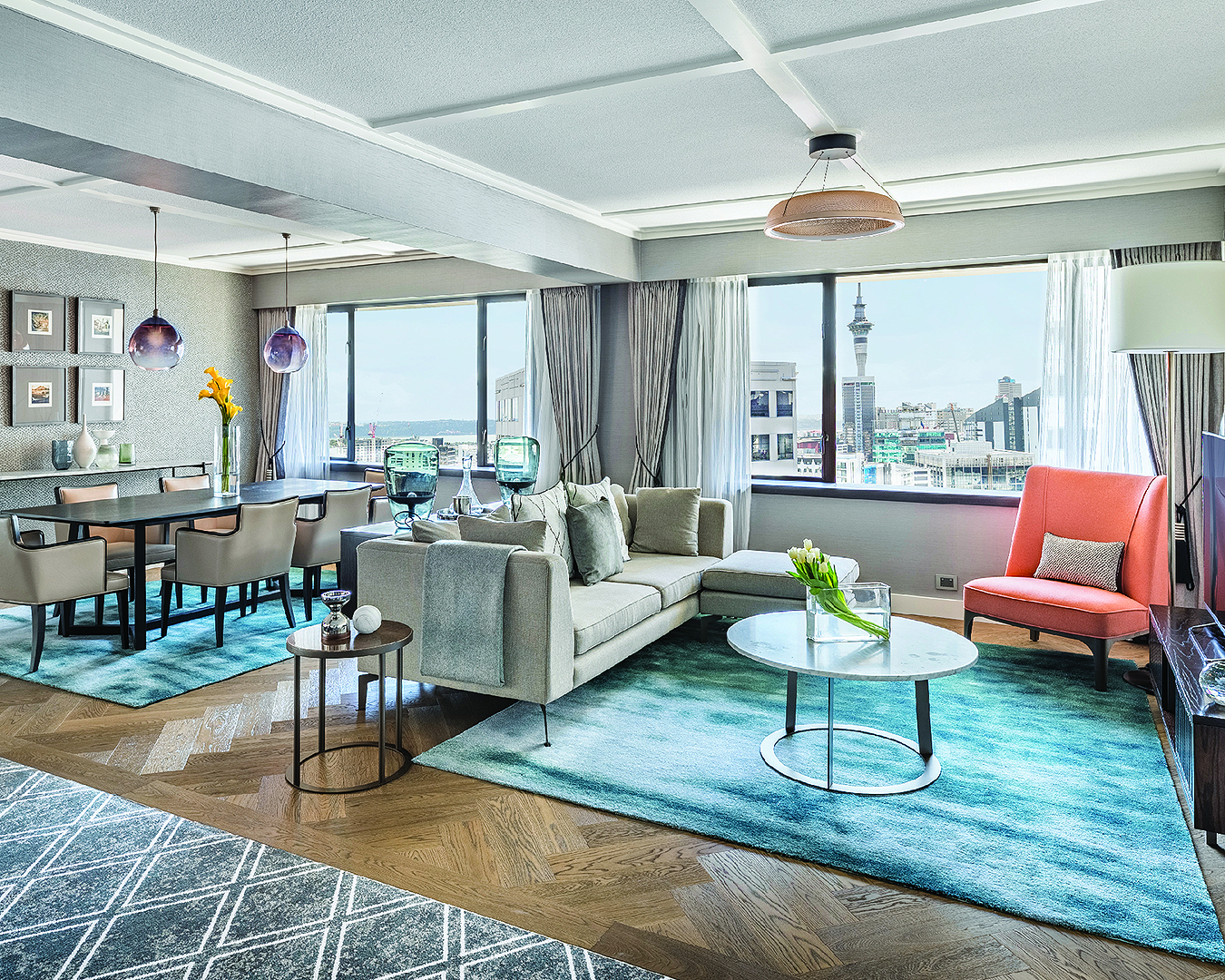 If food is one of your top priorities when it comes to accommodation, you need to get yourself to the soon-to-be largest hotel in New Zealand—Cordis Auckland. Formerly known as the Langham (and still part of the group) this hotel is just a five-minute walk from the bustle of K' Road, which is home to some of the best eateries in Auckland—Pici, Bar Celeste, Candela, Apero, Madame George and Clay to name but a few. Too lazy for the short stroll? Not a problem, as Cordis just so happens to offer one of the city's most epic buffets over at Eight. Featuring a world of cuisines from Asian to Indian and beyond, we suggest wearing your baggiest pants. Extra points for their chocolate fountain and endless dessert options. Special mention also goes to Cordis' swish NZ-themed bar, Our Land Is Alive as well as their next-level high teas, which are a highly sought-after experience. Premium hospitality and service is a given as this is one of the best hotels in Auckland but Cordis go the extra mile with their luxurious fit-out, Chandelier Room and of course, the Chuan Spa. Offering spa treatments like massages and facials, Cordis Auckland is a favourite for people looking to completely zen out whilst getting pampered like royalty (who incidentally, often choose Cordis as their pied a terre in Auckland). 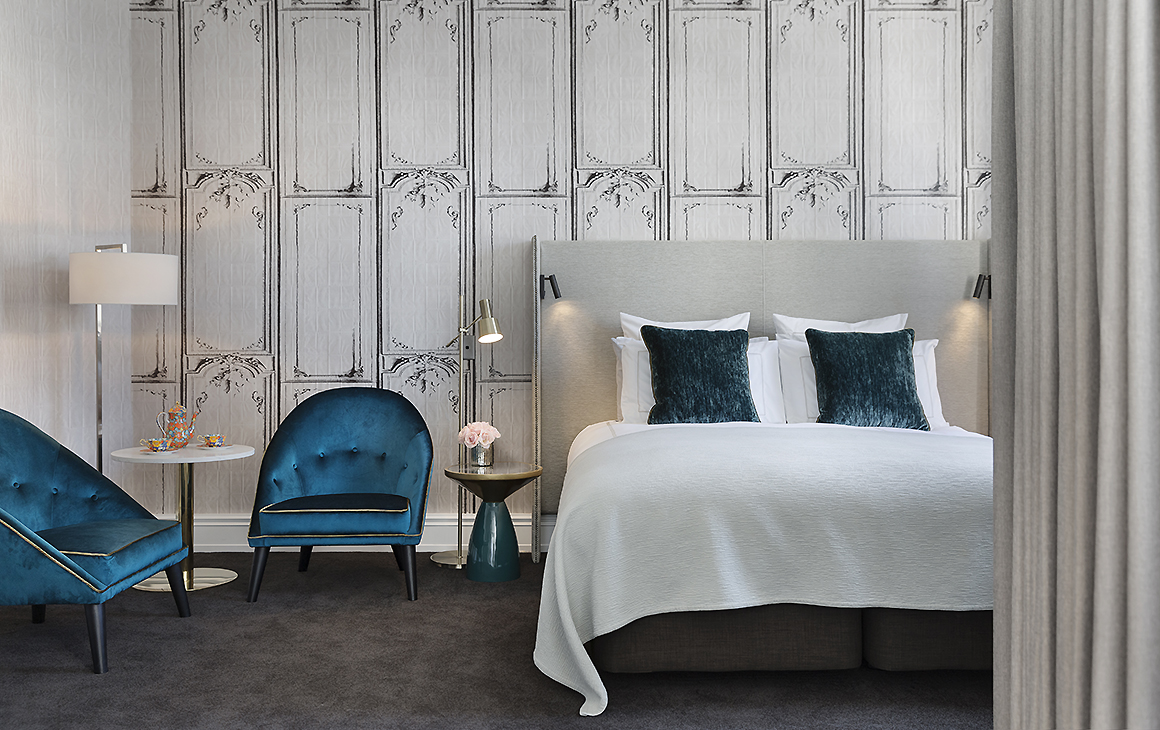 With its enviable position nestled right next door to Gucci and Louis Vuitton it's clear you'll be getting the ultimate dose of luxury vibes at Auckland's hidden gem, Hotel Grand Windsor. Within easy walking distance to many of Auckland's top eateries and bars (think Cassia and Café Hanoi amongst others), you're ideally placed for the ultimate staycation right here in Auckland. Plush carpets, first-class service and dreamy rooms that outshine many of the world's best, no wonder it's known as one of the best hotels in Auckland. Cooke’s Restaurant and Bar exudes the same style and elegance present throughout this five-star hotel, and if you're keen to really up the ante, a champagne high tea here will take your luxe experience to the next level. 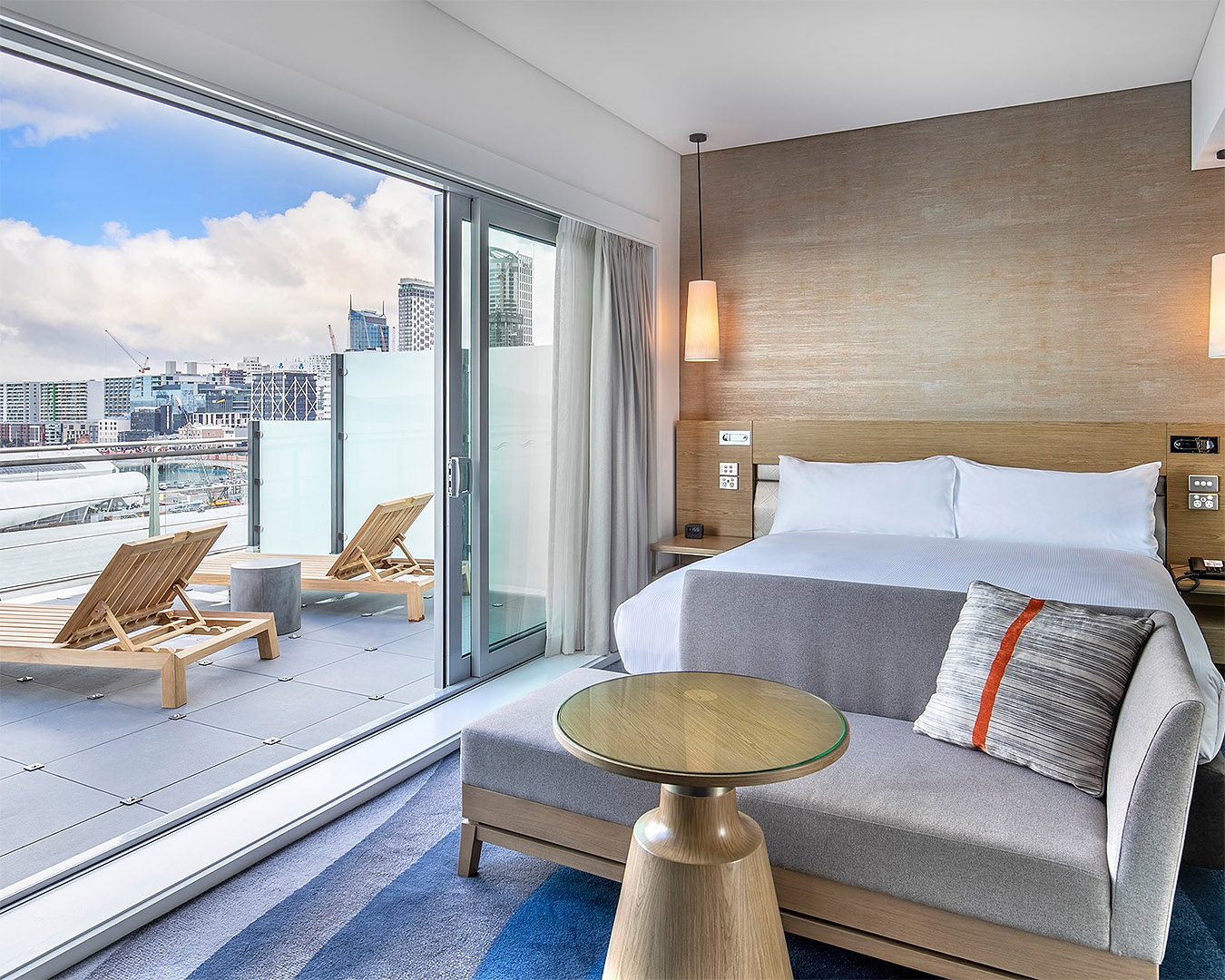 The Hilton is an empire of luxury and class around the world and Auckland is no exception. The Hilton doesn’t only provide sleek, stylish rooms and suites but its location is what makes it truly magical. Located on Princes Wharf, it showcases breathtaking views of Auckland’s stunning waterfront. Along with the idyllic location, The Hilton is the prime place to be when it comes to exploring some of the top eateries in Auckland, with restaurants such as FISH, Botswana Butchery and Euro a stone’s throw away. In fact, Bellini Bar is known as one of the best bars in Auckland and guests of The Hilton are lucky to have this gem right in the lush lobby. With amenities that include an outdoor heated swimming pool, gym and modern meeting rooms as well as a range of packages to elevate your experience, there’s something for everyone to enjoy at The Hilton. 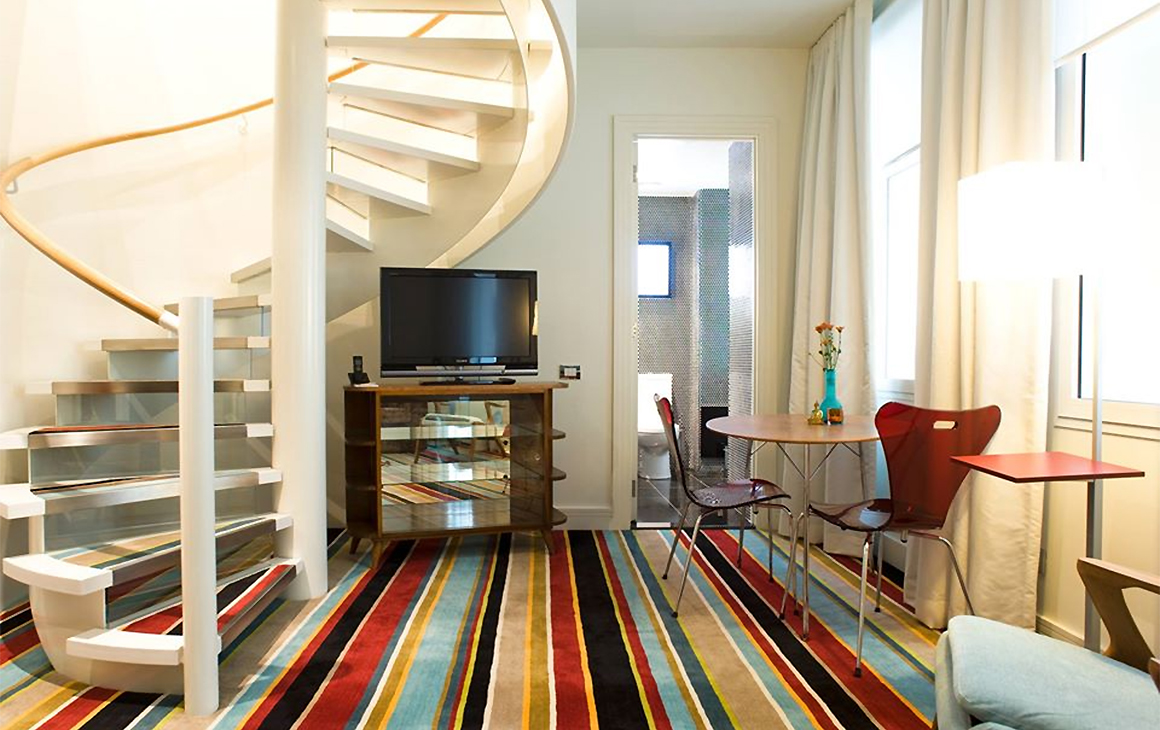 Hotel DeBrett is a luxury boutique hotel that embraces its smaller scale. Nestled on High Street it has a perfect set-up of eclectic furniture and stylish decorative details which exude Wes Andersen vibes. Hotel DeBrett provides the comfort and intimacy that makes you feel like you’re at home but the attentive service such as complimentary breakfast, that makes you feel extra special. The relaxed environment also has DeBrett’s Kitchen and DeBrett Housebar which offer a similar vibe of quality over quantity. The quirkiness and charming aura of the DeBrett empire have become an attraction for many locals in Auckland and is recognised as one of the best hotels in Auckland. 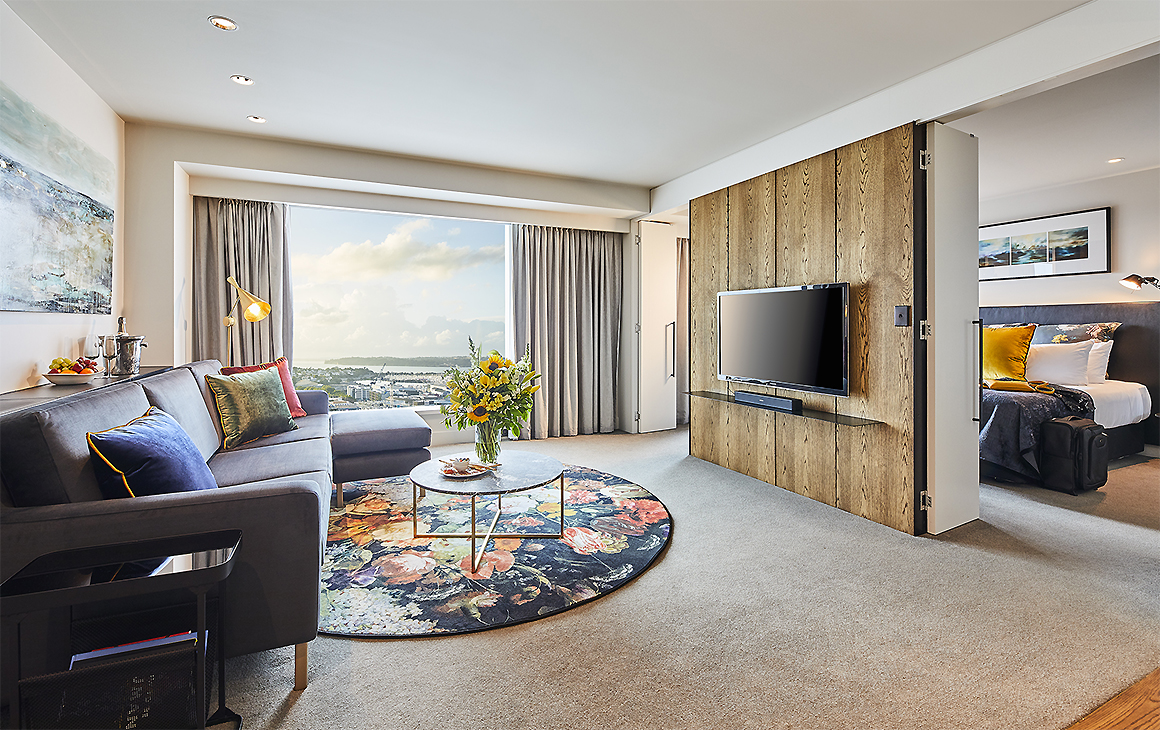 The Grand By SkyCity

In the heart of Auckland City, you’ll find the glamorous Grand By SkyCity. Starting from the luxurious lobby and spacious rooms, it’s clear that the Grand prioritises providing an upscale experience for their guests while keeping them constantly entertained. Top sight-seeing spots such as the Sky Tower are just seconds away from the hotel, which makes it a favourite for tourists. Guests will always have something to do, whether it’s dining at one of the nearby restaurants that have been consistently noted as some of the best in the city (Depot, MASU, Fed Deli and 1947 are all on the same street) or trying their luck at the SkyCity Casino. Located in the middle of the CBD, their rooms are sleek and provide a killer view of Auckland City.

Start your evening off right with a visit to one of Auckland's Best Restaurants.