It’s the year 2019 and we’re living in a time where the actual state of the world is being reflected in style, art, movies and music every single day. Be it gender-neutral fashion, the anticipated shift back to dictator-styles of leadership in TV shows and the power-surge of female artists in hip hop.

With this in mind, diversity and recognition are now at the forefront and as such, accountability sits at the core of music culture with consumers expecting all three to be mirrored throughout all aspects of an artist’s career.

And there’s no doubt an Armageddon is happening in the music world right now; Spotify has enabled a new block functionality, allowing users to mute artists they don’t want to hear (but not songs the artist may feature in) in the wake of Surviving R.Kelly and radio stations have simultaneously cut Michael Jackson off the back of the damning Leaving Neverland. 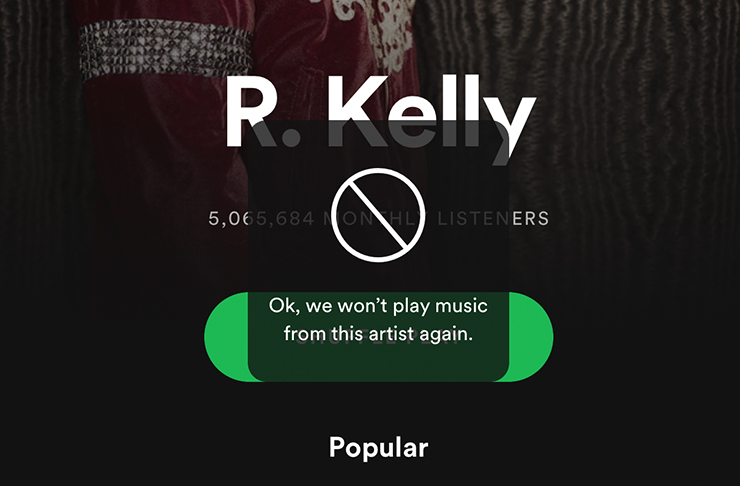 A wave of heightened awareness has surged over popular culture and manifested in what people are calling Cancel Culture. So, what is it? And is it problematic?

Here’s everything worth unpacking about Cancel Culture in the world of music.

What Is Cancel Culture?

A widespread social consciousness has given way for a cultural shift in the way we champion artists. As a result, no longer do artists hold an invincible amount of power or sit on an indestructible throne of reverence regardless of their actions.

The real question however is, how did this relentless culture of accountability come into play?

Though a personal decision for individuals, cancelling by the masses really started to come into fruition across the board post #MeToo (at the end of 2017), originally kicking off in the Twittersphere. And, it was undoubtedly the film industry that first felt the initial effects of being swarmed by the overarching power of Cancel Culture.

It was the bulk of stories that came out about acclaimed director Harvey Weinstein’s alleged history of rape, sexual harassment and assault that prompted consumers to reject a big name to the extent of never watching any movie produced by The Weinstein Company ever again.

Similarly was the case with Kevin Spacey, whereby his star lead in the iconic and Emmy award-winning Netflix series House Of Cards was effectively cancelled and the series never quite recovered (despite a killer takeover by Robin Wright).

From here onwards, coinciding sentiments reverberated into other industries (like music) with actions online reiterating that cultural boycotting was, in fact, a thing.

Practically, “cancelling” in the music world looks like recognising that artists are a commodity and their success ultimately lies within the support of the people. This means not buying their music or contributing to their success financially, not following them on social media and muting playlists on platforms such as Spotify should damaging stories of them surface. This could include homophobic tweets from years ago (a misalignment of cultural values compared to the masses) or various forms of sexual harassment (having a history of harmful behaviour).

So, Which Artists Have Been “Cancelled”?

The impact of en masse cancelling has worked its way through artists over the years like a snake and has rattled the careers of artists.

Though racking immense popularity throughout the period between 2014 and 2017 with hit songs such as Bounce (featuring MØ) and her Clueless-plagued hit Fancy (featuring Charli XCX) which sat at the top of charts for weeks, today, Iggy Azalea’s relevance is hard to pin. The Australian-born singer was accused of consistently appropriating and abusing black culture without apology through her rapping or so-called “blaccent” just to generate successful music sales.

For R.Kelly, it was the tsunami of stories that came to life after the six-part Lifetime documentary Surviving R.Kelly aired. The documentary sparked controversy as it detailed sexual abuse allegations against the American singer pushing his record label to effectively drop him. The contentious questions that followed around R.Kelly’s music were whether or not it’s morally wrong to continue listening to his work.

Even more recently, similar questions have encircled the work and legacy of Michael Jackson. After watching the intense four-hour HBO documentary Leaving Neverland which essentially brings light to child abuse accusations, many questioned whether (not taking into account if the accusations are false) we could still listen to the King of Pop in the same way.

Cancel Culture is a complex landscape to navigate mainly because, for everyone, the outcome and extent will vary.

There are many arguments that suggest the idea underlying Cancel Culture is problematic, toxic and even dub it as a pretentious form of bullying. The concept, without boundaries, immortalises a practice of unforgivingness and sheds light to a cut-throat digital world that gives no buffer for human error or genuine mistakes and learnings.

But, whatever side of the web you sit on, Cancel Culture is a powerful example of the embedded intersection of digital media and culture and a reminder that accountability reigns high and at the forefront of today’s music culture and that in itself, is not a bad thing.

Here's everything else happening in the music world this month.