We’ve teamed up with Peroni to bring you our What’s Trending hit-list: your monthly guide to maximising life in the city. We’re cutting through the chatter and counting down our top 10 hottest new openings, events, and trending happenings in Sydney this month, so you won't miss a thing.

Want the glory of being the person in your group of friends that always knows about the new openings and awesome things to do in Sydney? Or simply just want to know what’s up in our sparkling harbour city? Well, you’ve come to the right place. We’ve found the best new restaurants, coolest events, and hot new bars in Sydney to keep you out of (or get you into) mischief this October. Phone cameras at the ready people, you’ll want to Instagram the hell out of these… 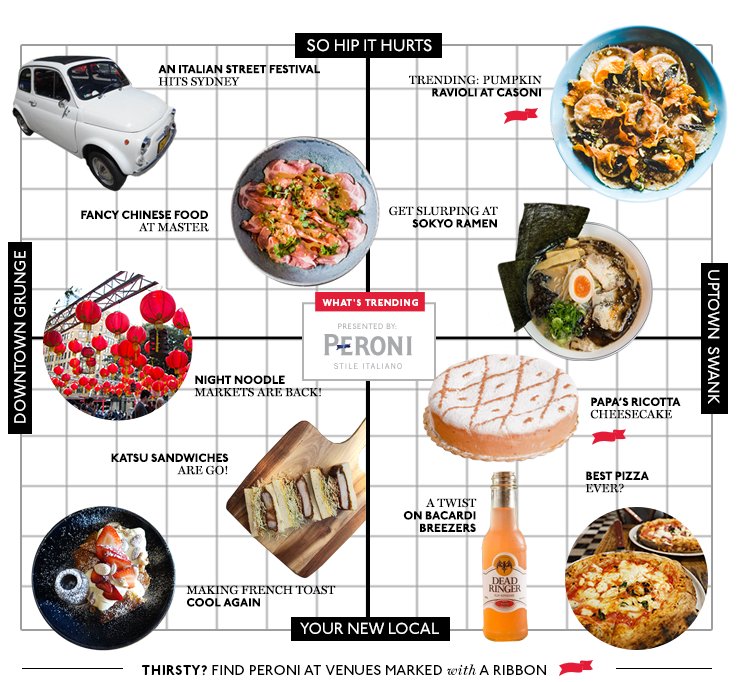 #1 The pumpkin ravioli at Casoni

Sure, we’ve all had pumpkin ravioli before, but the guys at Sydney Italian restaurant Casoni do it so damn well. It’s cooked up with pistachios, burnt butter and sage, and it salty and slightly sweet and so delicious that it’s a total non-negotiable when eating there. Pair that with a Peroni and that’s your night sorted.

Norton Street Leichhardt, AKA Sydney’s very own Little Italy, is holding an Italian Festa on Sunday October 25th from 10am till 5pm. If you’re Italian, Italian at heart, or just love Italian food and drink, add this event to your calendar. You’ll see cooking demonstrations from Italian chefs as well as Italian nonnas (because you know they’re the true kitchen bosses).

The cheesecake here is basically one of the best desserts in Sydney and it’s now in Bondi, which means it’s dangerously close for you Eastern Beaches dwellers (what summer bod?). It’s been around for years in Haberfield, and while many have tried to crack the code of the Pasticceria Papa cheesecake, the recipe remains a secret to this day. Guess we’re going to have to leave it with Papa because after all, Papa knows best.

We know that the title of Sydney’s best pizza is a hotly contested one, but we think that the pizza from Via Napoli is easily one of the best. Residents of Lane Cove and Hunters Hill have been smugly digging into the doughy bases for years, but now Via Napoli Pizzeria has set up shop in Sydney so inner city dwellers can get in on the smugness. Order a crisp cold beer with your pizza (because that’s a winning combo), and internally praise yourself for having such great taste.

#6 Sokyo Ramen pops up at The Star

Chef, Chase Kojima is on fire this year. After winning numerous awards, the Sokyo’s Executive Chef has launched a pop-up ramen restaurant in The Star’s food court. Offering four kinds of ramen, this little hole-in-the-wall has already garnered a tonne of social media coverage and sold thousands of bowls since opening in September. Available until November, we suggest you make a ramen date and get slurping in Pyrmont.

#7 Night Noodle Markets are back

In what is a highlight for any noodle lover’s social calendar, Night Noodle Markets is back to fill that noodle-shaped hole in your life. From October 8th to October 25th, Hyde Park will come alive with 50 stalls serving up all manner of Asian treats. Entry is free (you just pay for what you eat and drink), so turn up with an empty stomach and get in on the noodly action.

French toast was a thing for a while, then it kind of went away, but we think it’s making a comeback… Especially when it tastes and looks as good as the French toast at Stain Café in Hunters Hill. It’s served up with Greek yoghurt (so it’s not sickly sweet), a roasted nut mix and legit Canadian maple syrup that you pour over the decadent breakfast dish yourself. It’s filling, delicious, and totally ‘grammable. Do it, you know you want to.

Surry Hills is the suburb that just keeps on giving. This time we say hello to new Sydney bar, Dead Ringer, which is owned by the same guys as cool CBD cocktail bar, Bulletin Place. The Yuzu Breezer is making its way around the Internet at the moment, and is their tongue-in-cheek take on the classic Bacardi Breezer (don’t pretend you didn’t drink these in your early boozing days).

Sadly there aren’t that many cafes in Sydney that do a good katsu sandwich. Sure, we have chicken schnitty sambos, but they aren’t quite the same as panko covered chicken or pork, with tonkatsu sauce, doused in Kewpie mayo sitting in between crustless white bread. Fortunately new Redfern café, Oratnek is doing these and doing them well. Don’t believe us? See what most people are grammin’ at this café, then you’ll believe.

We're beyond thrilled to partner with Peroni to bring you the What’s Trending series—our monthly guide to the hottest new openings, events, and Instagrammable happenings in Sydney. Each edition of What’s Trending is researched and recommended by The Urban List, and served to you by Peroni—our go-to beer when we’re after something deliciously crisp to sip. Look out for our monthly Peroni What’s Trending hit-list for everything hot in your city right now, and while you’re working your way through the list, relax with a long cold Peroni at the hotspots marked with a ribbon. Buon Appetitio!