Where Chefs Eat | Anna Polyviou Dishes Out Her Faves

We’ve teamed up with Hostplus (an awesome super fund who are just as passionate about the Hospo industry as we are) to bring you the best of the city, straight from one of our fave chefs in Melbourne. When you head on into these chef hotspots, why not tip your future self too— don’t forget a little extra super now will make a big difference later on.

If you’re anything like us, you don’t waste your sugar rush on any old regular dessert. From freakshakes to floral arrangements atop our sweet treats, there’s nothing we love more than something a little crazy and creative.

With that in mind, we hit up Anna Polyviou, pastry chef and sugar maniac at the Shangri-La Sydney. Where does she go when she’s not making life-sized gingerbread houses, striking fear into Masterchef contestants, and headlining Sydney’s sweetest dessert festivals?

Here are five spots Anna loves to unwind once she’s outta the kitchen.

This Mediterranean-Middle Eastern hotspot is hidden away from the main street and its queue-magnet cousin Kepos St Kitchen, but you might be able to smell your way there thanks to the bread from the open oven. “I love Michael Rantissi, the chef, and those guys,” says Anna.

“I love the service, how they make the hummus in front of you, drizzle the olive oil, then Michael the chef comes out and speaks to you about the dishes. So simple, fresh and just delicious.” The hot bread straight from the oven can’t get much fresher or softer. 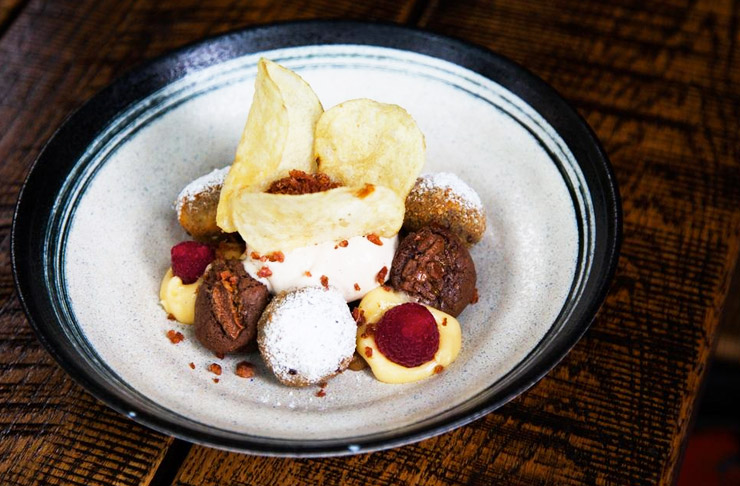 If you’ve ever seen some of Anna’s creations, you’d expect she appreciates good style when she sees it, which is why she’s a fan of Dan Hong’s awesome kicks as well as his kitchen genius. That said, Anna’s pretty keen on the one particular dessert at Ms G's which has long enamoured Sydney’s sweet tooths.

“How crazy is the Stoner’s Delight? Now he has a Stoner’s Delight part three—a doughnut with ice cream, peanut dulce de leche, crispy bacon, mars bar brownie, potato chips and deep fried Nutella.” Yep, it’s like the dreams we didn’t even know we had have come true, and with the seal of approval from one of Australia’s favourite pastry chefs, you know it’s going to be every bit as amazing as it sounds.

As a big fan of the little tick-box menu sheets and the big group of friends that inevitably accompanies a dumpling mission, it’s no surprise that Din Tai Fung makes Anna’s list. The interactive side of eating is what really gets her excited.

“I love the dumplings and watching them make it,” Anna says with the kind of glee and enthusiasm we highly approve of. “I sit there watching them and it's the bestest.” 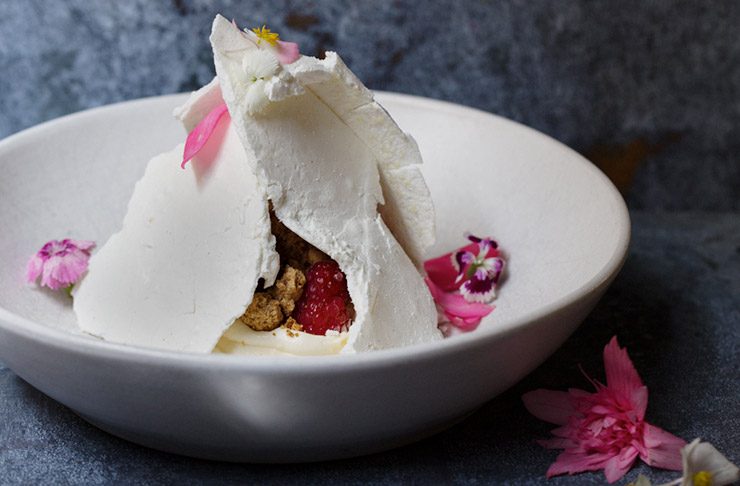 We have to admit we bonded a little over this Surry Hills restaurant. The food is always rave-worthy and, like Anna, we love that the atmosphere and the sleek décor that’s not at all intimidating or stuffy. For Anna though, it’s the desserts that she really appreciates.

“It’s got great food, but for me it’s a dessert place. I like restaurants that know how to execute desserts.”

Since Anna’s originally from Melbourne, there was no way she could miss this one. Greek restaurant Gazi is steered by the one and only George Colombaris, who Anna has ties with from the early days. “I go way back with George, we did our apprenticeships together in Melbourne at the Sofitel years ago and it was great catching up with him when we filmed MasterChef down in Melbourne earlier this year.”

So what does she love about this traditional Greek spot in the heart of the CBD? “The quality is amazing. Their Loukomathes are so good—honey Nutella and hazelnut chocolate ice-cream.” The rest of the desserts feature cool modern twists on her childhood favourites, offering a shot of nostalgia to the table.

Of course, even the best chefs suffer from a little FOMO, which is why there are plenty of things on Anna’s radar.  While we’re creating food wishlists it’s also not a bad idea to chip in to our future-self funds (aka our super funds) to make our life wishlists come true. Even a few coffees’ worth of coin now will make a big difference down the track (even though we’re totes aiming to retire at 35). So what’s making Anna save up her pennies?

Unsurprisingly, three of The Urban List’s favourite restaurants in Melbourne, Anna’s home turf, make her list of must-try venues that she’s yet to dine in. The creative Modern Asian at Chin Chin is making her drool, plus she feels hair affinity with executive chef Benjamin Cooper (fair call). “Better yet he’s so passionate and the team over at Masterchef kept on telling me how amazing his food is.” Yep, we’ll concur that it’s a must in Melbs. Further south from Asia, Indian hot spot Tonka Restaurant also makes her wishlist: “My cousin swears by it and how amazing it is, from first course to the last.”

For a more casual feed, she’s got her eye on Tuck Shop Take Away: “The food is just fun, and it might be burgers and fries along with a soft serve, but for easy eating there’s no other way.”

On the other end of the dining spectrum, Attica’s chocolate “Pukeko” egg is high up on her list, and not just because her friend Tad Lombardo creates them. These salted caramel beauties are presented in an actual nest (would we expect anything less from this three-hatted restaurant? Probably not.

Book your tables now, Anna, and get ready to treat yourself the next time you’re in Melbourne. Trust us, they are definitely worth it!

As you add these spots to your own bucket lists, pop a tenner in for each and let it grow in your super fund for excellent eats when you too have knocked off work (this time for good).

Want to win an amazing Melbourne food experience of your own?

Hostplus is helping you save up so you can keep on stuffing your face, well into your older days. All you have to do is treat yo’ self by paying your future self. Sounds pretty win-win, right?

Simply top up your own Hostplus Super account today and you could win your way to Melbourne for a jaw-dropping foodie long weekend worth $6,000:

Don’t have a Hostplus account yet? It only takes a few minutes to set up. Hostplus is the super duper Super Fund for those who live and love hospitality—get on board!

Editor's Note: This article is proudly sponsored by Hostplus and endorsed by The Urban List. Thank you for supporting the sponsors who make The Urban List possible. Click here for more information on our editorial policy.