Little Bourke Street has gathered quite a little collection of Melbourne's best bars and restaurants in the city – Longrain, Naked Espresso Bar, Mr Burger – and adding to this list are newcomers Anthony Renzella and Brenton Schaeche with East End Den.

Having opened a little over two weeks ago, this modern kitchen and bar is located in a niche basement right in the hub of the city. The location was one of the main drawcards for Renzella and Schaeche who had searched for this type of out-of-the-way setting in the CBD for some time. 'We quickly established how fortunate we are to be surrounded by some of Melbourne's best-known restaurants and bars in which is arguably the most densely populated restaurant district in the city, surrounding the heart which is Crossley Street,' explains Renzella. What East End Den offers us Melburnians is a unique balance of casual dining and a sophisticated cocktail bar.

The combination of the duo's different upbringings and shared love of Melbourne's eclectic nightlife and dining scene saw East End Den come to life. Renzella grew up in the city while Schaeche was raised as a country boy in Bairnsdale: 'We like to think that a collaboration of our different upbringings really played an impact on the design of the space and the creation of the menu, emphasising the importance of fresh and local produce combined with the hustle and bustle of the city,' explains Renzella.

The fresh and locally-produced menu comprises of what Renzella simply puts as 'good honest food' with small and large plates available to diners along with some very bar-friendly sliders, (keep an eye-out for the shark, caper slaw and avocado option). The drinks menu is also a winning formula, with a variety of mixes sure to please any cocktail-lover.

Says Renzella, 'My perfect meal at the Den would begin with a Mountain Goat Steam Ale on tap, a couple of Bloody Mary oyster shooters with an exquisite basil kick, ideally I'd be sitting in the booth with a group of friends and order a few entrees, lamb cutlets, beef sliders and the 350grm sirloin to share, followed by the pecan popcorn sundae which is drizzled in chocolate and salted caramel, YUM! This wouldn't be complete without long deliberation over the cocktail list, but I would most likely finish with a tangerine sky (our twist on the negroni, which is served over an ice sphere) or a black martini.' Can we join this party?

The space has a clean New York-style feel, with the long copper and cement sheet bar as the focal point of the room effectively complementing the other raw building materials used within the venue. Locally crafted terrariums are placed around the space and quirky artwork by Adelle Gresle decorates the walls.

So the next time you are roaming around the city looking for a friendly escape boasting a lip-smacking menu and a well-rounded cocktail list, descend into East End Den – you won't regret it. 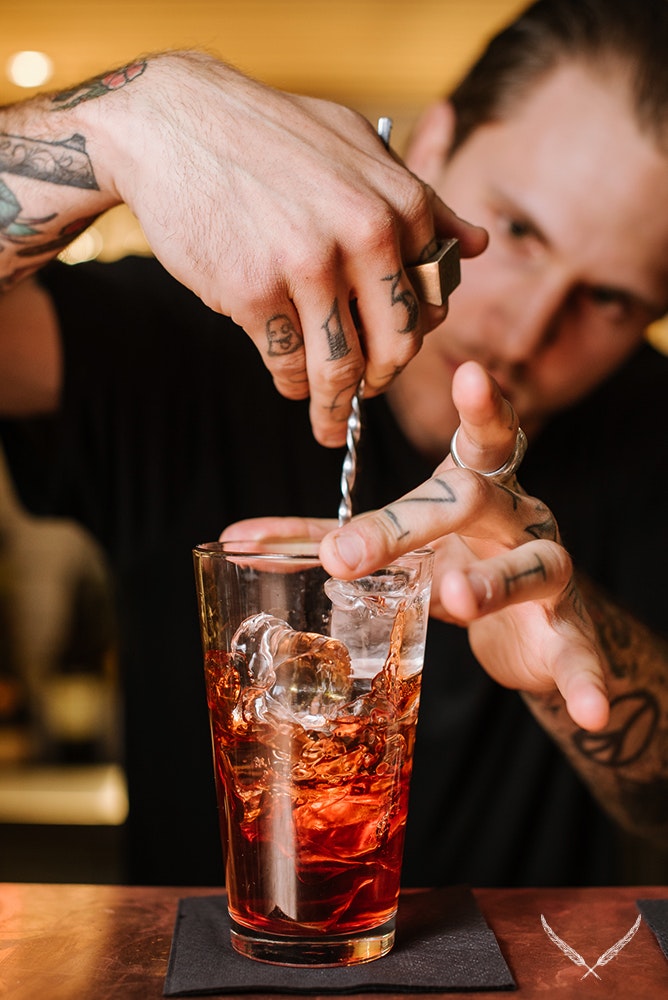