Geno Sparrow will tell you, a proper Philly Cheesesteak is a pretty simple construction—basically grilled meat, cheese and onion in a soft, hoagie roll. But like most things, when you dig a little deeper, it gets more complicated.

“Whenever I see a cheesesteak on a menu, I’ll order it,” he says. “And most of the time I’m like ‘Man, what is this?' They've got the cheese all wrong. This bread doesn’t taste right.”

Sparrow and his partner-in-cheese, Sammy Lynch, run Sparrow’s Philly Cheesesteaks, a restaurant that (Sparrow claims) does the only authentic cheesesteak in the country. And that doesn’t come easy. The boys import exactly the right kind of American cheddar from the States. The hoagie bread roll is based off a single prototype that they smuggled into the country, shopping it around Melbourne’s bakeries until they found a wizard who could replicate the pillowy soft formula. 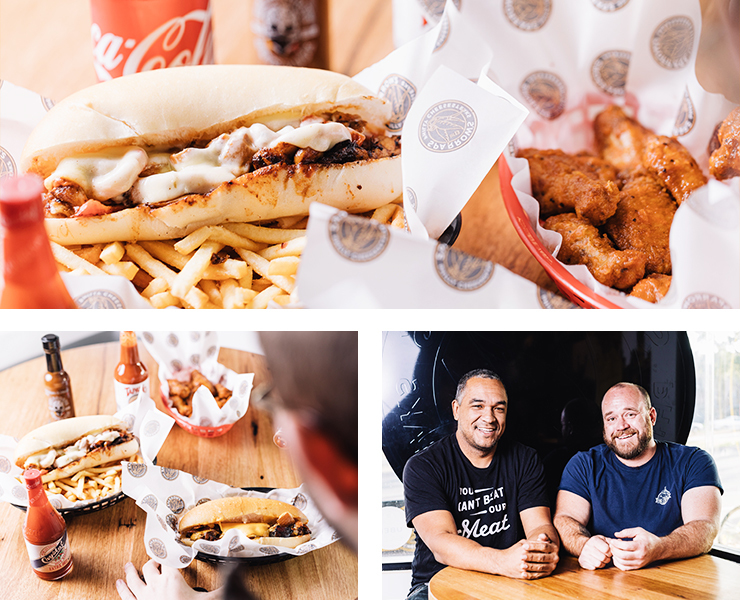 The only difference between cheesesteaks at Sparrow’s and cheesesteaks in Philly? The quality of the ingredients. “We’ve had guys drop by from Philly who say our stuff is even better,” Sparrow says.

One bite of these things, and you can believe it. The meat is A-Grade scotch fillet, cooked on a massive open grill in the brand’s new St Kilda Rd restaurant, the bourbon sauce is home-cooked using Maker’s Mark, the signature amoroso rolls are baked fresh right here in town. Even the chicken is ethically sourced from local suppliers. It’s like someone paired Philly street smarts with Melbourne’s mild obsession for world-class seasonal produce. The result? F*cking delicious cheesesteaks.

For three years Sparrow and Lynch were grilling out of the kitchen at The Catfish in Fitzroy, serving up hoagies to a growing legion of northside fans. A food truck followed, and they became a regular favourite at Welcome to Thornbury and other food truck festivals. Now they’ve opened their first bricks and mortar bar on St Kilda Rd—a quasi-industrial strip that used to hold...well, nothing very much. Now it’s Cheesesteak Mecca.

The bar itself it a riff on the traditional American sports bar. There’s the grill on the side, where Sparrow and his team prepare the hoagies, a few tables and chairs, plus a big-screen TV running various American (basketball, NFL, ice-hockey etc). The venue recently got its liquor license, so now you can grab American craft beer alongside your sandwich.

The cheesesteaks themselves are (predictably) ridiculous. Pillowy soft subs, stuffed with cheesy, meaty goodness. A local tradie described them as “the second best thing I’ve ever had in my mouth.” The menu has a variety of options (even a pulled jackfruit hoagie and smoked organic tofu for the vegans) but the star of the show is the Deluxe Bourbon & Bacon: grilled beef, cheese, onions bacon and a good lug of Contraband bourbon sauce.

“We don’t burn all the whisky off on that one,” Sparrow says. “We add it right at the end, so you can still taste it.”

For sides, it's hard to go past the chicken wings or the chili cheese fries: loaded with a smokey meat mix and lashings of gooey cheese, sour cream and spring onions. Sure, it's roughly the same ingredients as your sandwich, only in chip form, but who cares? They go bloody well together. And we're guessing you didn't pick this place for the greens...

Sparrow’s is already killing it at their new venue, and we’re pleased to announce that the inner east can now get in on the fun. Yep, Sparrow’s is expanding. In fact they just took over the kitchen at Hawthorn’s Nevermind Bar (one of our favourite, no-frills watering holes). You can order your hoagies over the phone, in-store or on UberEATS, where the boys do a booming trade. Once bitten, never forgotten. You need to get these things in your mouth, pronto.