Meet The Artist Drawing Intricate Maps Of Melbourne And Sydney

If you haven’t heard of Jenni Sparks yet, then put her on your radar like, yesterday.

The London-born illustrator is quickly becoming infamous for her instantly recognisable, insanely detailed and quirky maps. Her first map (of her hometown London), came out in 2012. The concept was pretty simple: a humorous map that “didn’t just focus on the tourist spots."

Her latest project is mapping our very own Melbourne and Sydney. Sydney is actually available right now (Melbourne, you'll have to wait a few weeks. Watch this space). 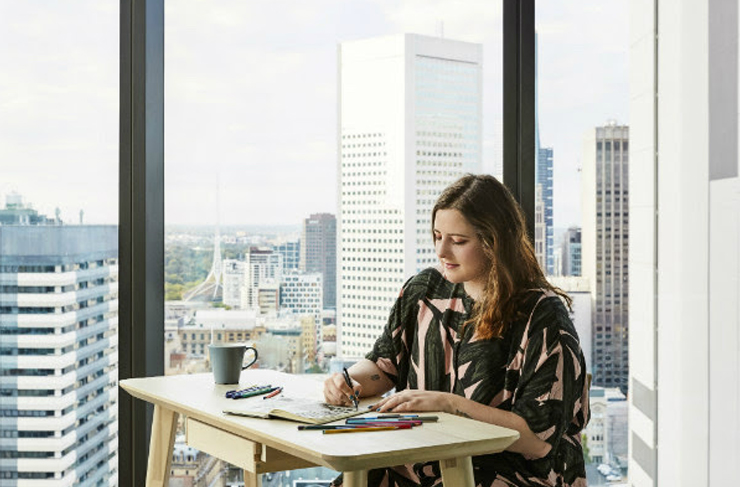 We sat down with Jenni on her recent Melbourne trip and got talking about all things cartography.

What made you choose Melbourne and Sydney as your next map project?

I work with an art print company called Evermade who print and sell the maps, and they commissioned me to make them. I've already illustrated maps with them like London, Paris, New York, San Francisco and Berlin. Sydney and Melbourne are also interesting, cosmopolitan places, so it was kind of a no-brainer!

What are some of your personal highlights from Melbourne and Sydney?

The whole trip was amazing, and I could list so many highlights. In Sydney, my highlights were seeing the views from North Head, the amazing sunsets and travelling back from Manly to the CBD on the ferry.

In Melbourne, my highlights were sitting on the Shrine of Remembrance taking in the Botanical Gardens on a sunny day, coffee in the laneways, and learning about the city's history at Melbourne Museum.

But mainly the highlights were all the different people that I met, and working with them to get their take on the city.

How long does it take you to draw a map?

It takes me about 3-4 months to draw a map from start to finish. I’m in the middle of drawing them right now and I’m doing 12-13 hour days, 6 days a week. It’s a very intense process.

There is usually about a month of research at the start of the project before I even visit the city. Obviously, when you visit any new place it's very exciting and stimulating, but I have to take everything in that I can when I visit—I feel like I’m a professional tourist in a way.

I do make a lot of notes while I’m there, but these are more cultural/societal, like the slang that's being used, what the road signs look like, the food that people like to eat. All the things that you wouldn’t necessarily get from reading a book or going on the internet.

How do you choose the places that you highlight or name on your map?

I start off by going through tourist guides, looking at the index and listing all the things that they have featured. Once I’ve gone to the city I ask people what they think should be featured on the map or removed—sometimes there’s a bar or something that’s a real tourist trap and locals despise it. I try to go with the local point of view, as I know what it’s like to live in London and the tourist facade often isn’t the ‘real’ city.

There’s a lot of thought and consideration that goes into what should be on the map or not, but I sometimes get emails or comments from people that are very angry to see their favourite place is not on the map. I don’t really mind—I love to see people interested and passionate about my art, but I also have to remind them that this is not the ‘official’ map of the city. It's my own personal interpretation.

Any cool Melbourne or Sydney spots you think are underrated?

I’m not sure if it’s necessarily underrated, but one of my favourite things in Melbourne was the chain of 7-11 shops. The coffee was cheap and decent and they were always open. I loved using the coffee machine and the slushie drink machine, and there was always an interesting mix of people in there.

In Sydney I came across a really cool deli/bar in Newtown called Continental Deli—I’m a big fan of salty olives and canned fish and they also serve all their cocktails out of cans, which I’ve never seen before.

What city are you planning on mapping next?

It all depends on how the Sydney and Melbourne maps are received, but for years I’ve been saying that I’d love to do a map of Tokyo. I’ve always wanted to go there and I think the challenge of the language barrier would be really interesting. I’d have to get a translator, and there would be so many customs and social aspects that I’d have to learn to do it justice. Hopefully one day I’ll get to do it.

You can check out Jenni's full range of hand-drawn maps on Evermade. The Sydney map is up for sale here. Melbourne, be patient. Yours is on the way.