An Artist Has Engineered The Smell Of ‘Melbourne’ At The NGV

How do you capture the scent of Melbourne? You’d need coffee in there somewhere, obviously. And probably the smell of a CBD alley at around 2am. The salty whiff of St Kilda Beach at sunrise. And maybe a tang of eucalyptus from down Emerald way.

Well at the new NGV triennial, one artist and smell engineer has done the impossible—she’s captured the nasal essence of our most liveable city. And it smells kind of...gross. There we said it.

The work is called SmellScape Melbourne, and it’s by renowned Norwegian artist Sissel Tolaas. A lady whose resume includes recreating the smell of outer space, the mustard-gas scent from a WW1 battlefield, and even a cheese made from molecules found in David Beckham’s left boot.

Now she’s turned her personal library of 7000 scents (and one very attuned nose) on Melbourne, installing dozens of white panels inside the NGV. These are ‘imbued’ with various Melbourne smells, which will apparently keep emitting odour for the next seven years. Entry is free. Anyone can walk straight through, edge up to one of the panels and have a sniff. 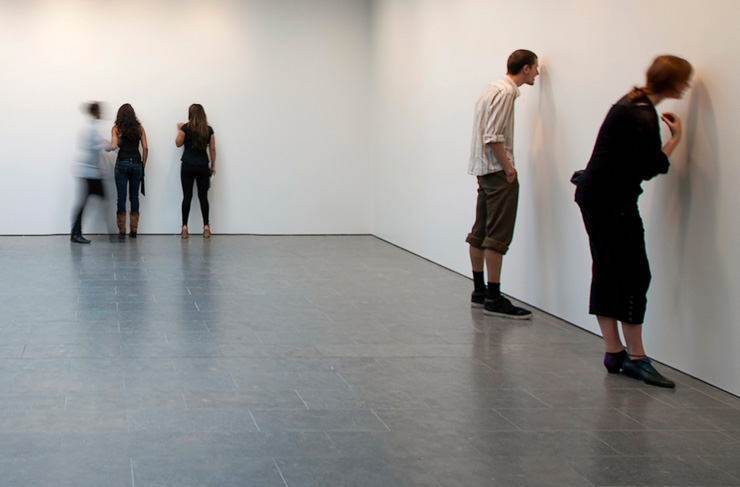 Cynics will say you can smell Melbourne for free every day. Just go outside and breathe. But the process of collecting, cataloguing and then synthesizing smells is pretty bloody interesting. And the results are divisive.

Be warned, not all these smells are pleasant. Some panels smell like coffee grounds (tick), while others resemble something akin to bin juice. A few smelled like fresh air, others like a musty room. Most we couldn’t identify—they tickled some deep nasal memory without throwing up anything recognisable.

There’s no little panel next to each to tell you what you’re smelling either. You have to follow, as they say, your nose.

Where: National Gallery Of Victoria, Ground Floor
When: Till 15 April 2018
For more info, click here.

You'll need something sweet after all those smells. How about Golden Gaytime cheesecakes on sticks? Man, we're good to you guys.