Saint Dreux starts serving katsu sandwiches at precisely 11 am. I arrived at 11:01 am, out of breath and slightly worried they’d be sold out. My weird paranoia is not unreasonable: I’ve been told the queues at Saint Dreux resemble the pitchfork-wielding ones that gather outside pharmacies during a zombie outbreak. Things can turn ugly. Everyone’s keenly aware that there’s not enough katsu to go around. By 1 pm the café is usually stripped bare—nothing left but a couple of wobbling plates and the lingering smell of pork.

Saint Dreux is the new ‘coffee and katsu sando bar’ from the team behind Bench Coffee, Joshua Crasti and Arkhe Tekhne (along with co-owners Nick Chen, Frankie Tan and Claye Tobin). It serves very good, very strong coffee and fluffy, white bread tonkatsu sandwiches. That’s pretty much it. The approach is ripped straight from the Lune 101 playbook: take one thing, break down its various component parts, then hone every single element with obsessive attention to detail.

Even the fit-out looks a bit like Lune. Crasti et al. have gone for a matte-black, futuristic spin on Japan’s sliding bamboo shoji screens: soft, glowing lightbox panels that beckon you from across the food court. Croissants and spongey castella cakes sit beneath the counter on individual glass plinths. All the servers wear crisp white shirts under tailored black aprons. It’s that kind of café. 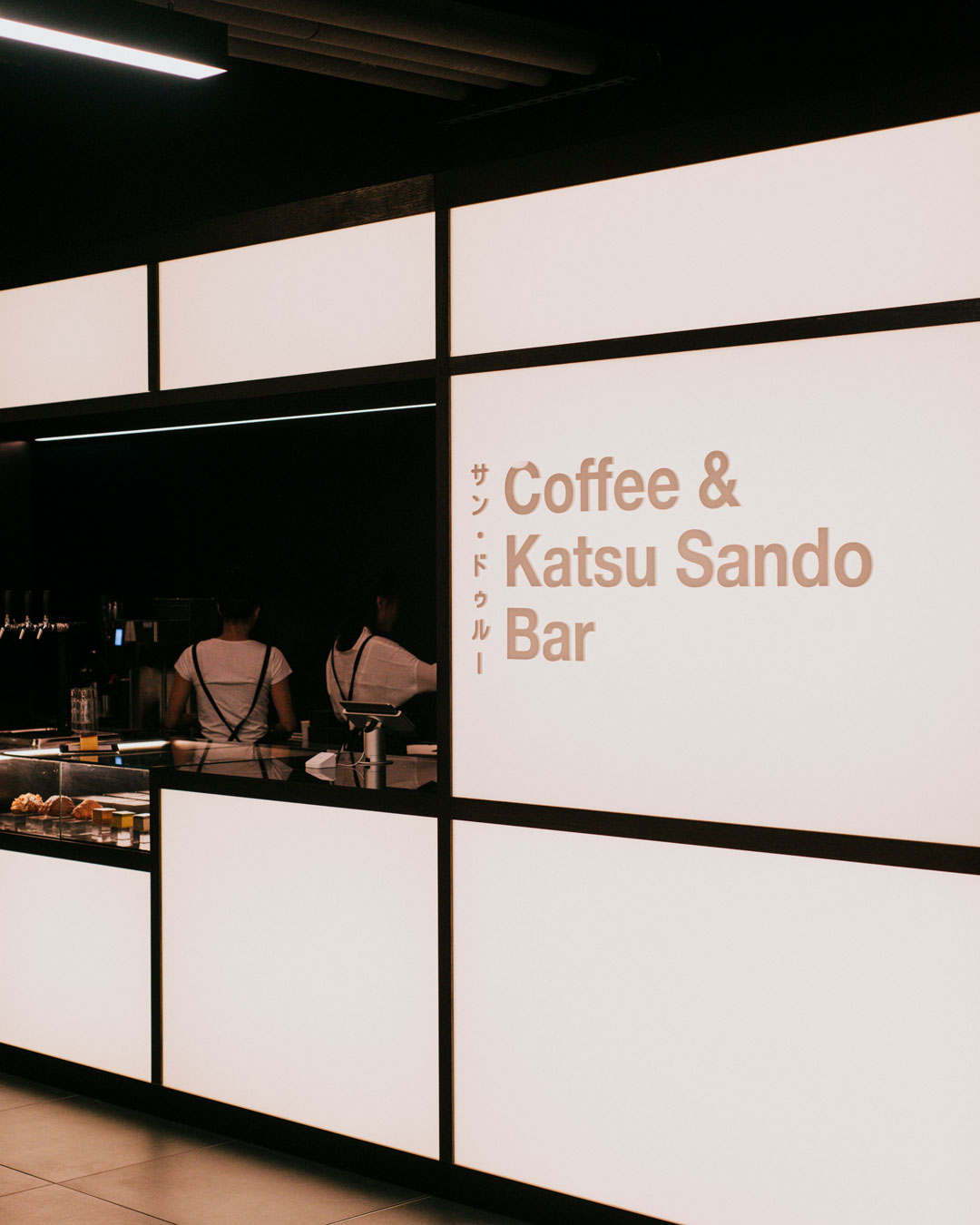 Oh yeah, did I not mention? This place is in a food court. The owners say they were inspired by the underground food halls of Tokyo, where you can legitimately find some amazing stuff. But it has to be said, Melbourne isn’t Tokyo (yet). Food courts, even lavish architectural ones like St Collins Lane, are still fluorescent and tomb-like and vaguely sad. This is one of Melbourne’s nicer food courts, sure, but that’s a bit like being Melbourne’s nicest airport lounge or hospital waiting room. Even factoring in some serious matte black interior design, at the end of the day you’re still a guy sitting in a food court. I suppose you have to give Saint Dreux credit for trying to sex up the genre.

You can order five different katsu sandwiches at Saint Dreux. They are the Egg Katsu Sando ($12), the Chicken Katsu Sando ($14), the Prawn Katsu Sando ($15), the Kurobuta Pork Sando ($15) and the Wagyu Beef Sando ($28, marble score 7–8, and surely the most expensive sandwich in Melbourne). I opted for the pork and the prawn. Every sandwich is cooked to order. I’d heard rumours of 40-minute-plus wait times, but one of the perks of eating lunch at 11:01am is that you’re the only one doing it. My ‘sandos’ came out in seven minutes, each one served inside the slinkiest bit of product marketing I’ve ever seen.

Saint Dreux packages its sandwiches in individual, matte black cardboard boxes, stamped with ‘SAINT DREUX’ and some katakana characters I couldn’t read (a quick email to a Japanese translator—that’s right—confirmed they spell out ‘SAINT DREUX’). You also get a KFC-style moist towelette inside a matte black Saint Dreux sleeve. Matte and black are both very big at Saint Dreux. The box is about the size necessary for transporting a blueberry muffin, and looks like the sort of thing that emits a pneumatic hisss upon opening. It’s simultaneously really cool and a bit of a waste. We’re not buying a Rolex here. I would have been happy with a paper bag. 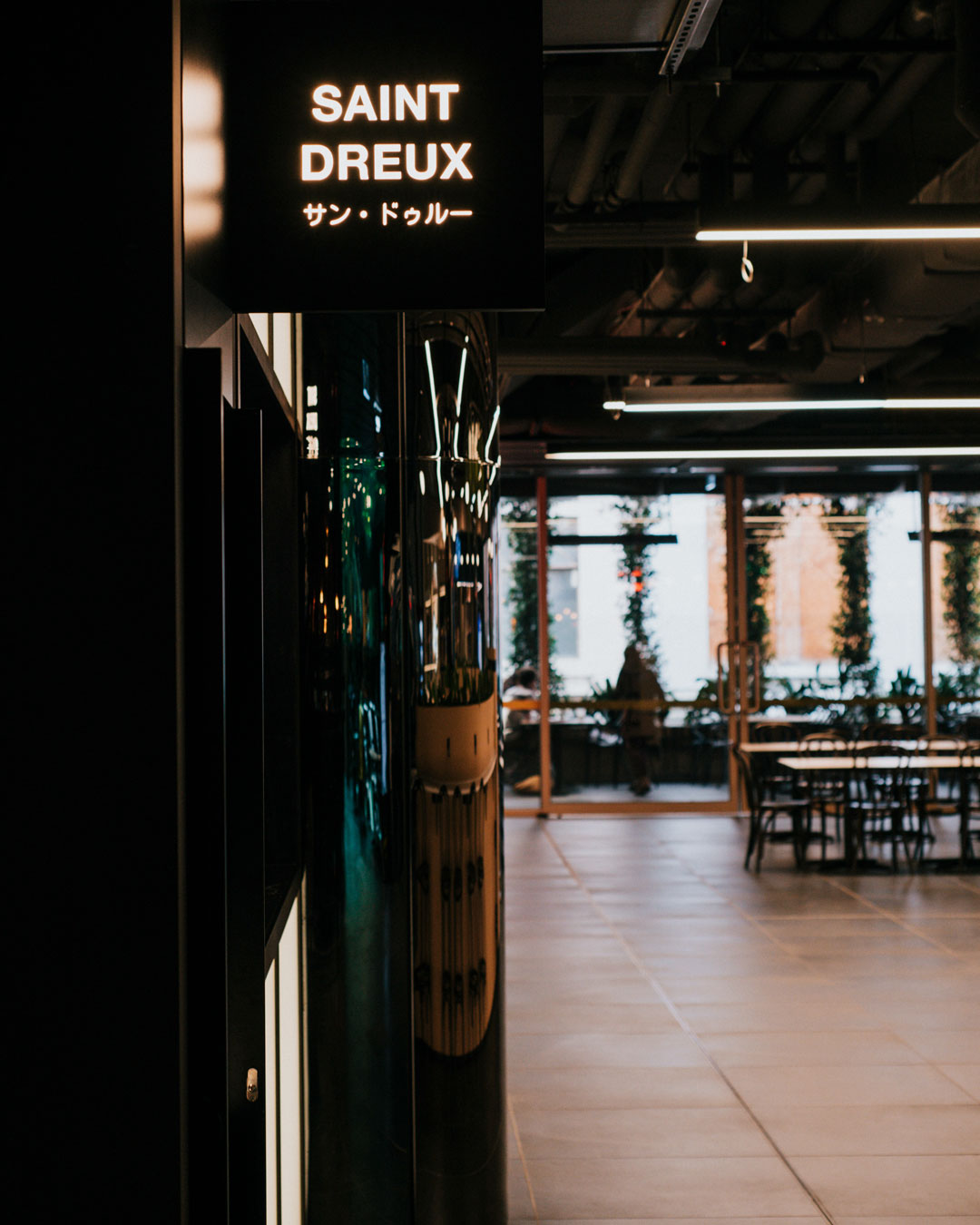 The sandwiches are inside, cross-sectioned, cut exactly in half (by what I imagine is a razor-sharp imported Gyutou knife) and look about as attractive as pork and white bread can look. I’m pretty excited. First impressions are good. The pork is juicy and not overcooked, the Nama Panko crumbs are big and gnarly and offer an audible crunch, and the kurobuta sauce has that vinegar, mustard-y twang. The bread is Japanese shokupan: a crustless white loaf, sliced mattress thick, and with a similar texture to brioche. My one complaint is the size: for $15, the whole experience is over very quickly. I could have counted the mouthfuls on one hand.

According to online reviews, this is the only real problem people have with Saint Dreux. Everyone agrees the katsu sandwiches taste great…there’s just not much of them. And if you’re dropping $15 on a sandwich, at the very least you want to feel full afterwards. I didn’t try the $28 Wagyu sando, but I imagine the resentment is particularly acute after handing over that sort of money for a sandwich. The best way I can describe the size of Saint Dreux’s sandwiches is ‘lunchbox friendly’.

So where does that leave Saint Dreux? It’s a cool idea, backed by creativity, market research and shit-tonnes of money (I can’t imagine those matte black boxes come cheap), but that price point and the small serving might become an ongoing problem. Something will have to give. After four months, every CBD office worker within 2km will have tried one of these things. The novelty will wear off. To succeed in the city, you need to become part of people’s weekly lunch ‘rotation’, and paying $15 for a couple of mouthfuls might not cut the tonkatsu sauce…

For all the latest openings around Melbourne, keep an eye on our Food & Drink section.