The Verdict | Beneath Driver Lane

Deep beneath Driver Lane in the CBD, behind an unmarked black door, then down some stairs, you’ll find an abandoned bank vault—a hangover from the old Money Order Office.

For hospo pro Hamish Goonetilleke, it was an opportunity that doesn’t come up all that often.

“Just look at this place!” he says, waving his arms around. “Feel those walls. That’s solid brick. We knew we weren’t going to find another venue like this.”

Hamish already runs one of our favourite northside bars, The Rum Diary on Brunswick St. This was his chance to cut loose with a riff on the same theme. A secret underground cocktail bar where the booze was strong, and the music rocked. The result is the city’s new subterranean blues bar: Beneath Driver Lane.

“We want that driving, throbbing blues,” Hamish says. “That real 12-bar feel, driven by the base. The kind of music you find your foot tapping along to.”

We stopped by on a sleepy weekday afternoon. The Melbourne sun was flame-blasting the CBD, but the temperature drops as soon as you wander down the stairs. The fit-out is one of the coolest we’ve seen all year: one part contemporary Melbourne, one part Parisian saloon, two parts New Orleans blues club. Chunky brick arches that could withstand a nuclear blast, cosy wall-mounted booths, a smattering of bistro tables, and a massive bar that runs pretty much the length of the venue. 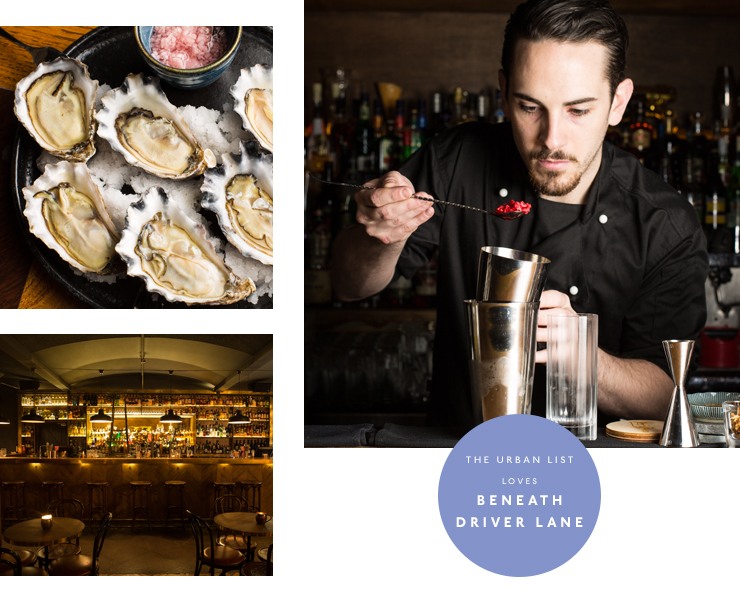 “The bar used to end right there,” says Hamish, pointing, “but we extended it and re-stocked it. We’ve got a huge range of boutique whiskies, rum, gin, a little vodka.”

The cocktail list was put together by head barman Johnathan Miniham, who cut his teeth at The Toff In Town, running the pass there for the last four years. Cocktails here are divided into theme. So, if you’re in the mood for something ‘Deep & Soulful’ you might order the Bourbon Smash (a tart boozer, spiked with raspberries, mint, bourbon, lime and sugar). Looking for ‘Funky & Unique’? How about the I Am The Fox (cinnamon infused milk, strawberry liqueur, Pedro Ximinez and whipped cream, served in a choc-coated waffle cone).

The bar itself is better stocked than the average Dan Murphy’s, so if you’re a hardcore rum or whisky nerd, there’s a good chance you’ll find something to tickle your fancy. Hamish deliberately curated the list to appeal to hardcore pros and beginners alike.

“Bars should be somewhere you feel comfortable,” he says. “People forget that. So if you want to come in and try that latest gin out of Europe, or chat whisky with Jonathan up at the bar, you can. If you just want a quick cocktail, we can do that too.”

The food matches the booze: big, punchy flavours and traditional bar snack staples, given a fresh kick by head chef Danielle Rensonnet (ex Bellota and Wilson & Market). You’ll be hard-pressed to find anything on there that doesn’t pair beautifully with two fingers of Laphroaig.

Us being us, we were immediately drawn to the Driver Lane Cheese Toasty, loaded with three different cheeses and a whisky béchamel sauce. We can confirm this was an effing excellent decision. Follow that up with a half dozen freshly-shucked rock oysters, or maybe Rensonnet’s handmade sausage rolls, with spicy relish that makes your forehead sweat.

For mains, we’d recommend the hanger steak. “You don’t see this cut often,” Hamish says. “But if you cook it rare, it’s crazy good. It’s what they call a ‘butcher’s cut’” He’s right too—the steak comes out blushing red in the middle, topped with a herb-rocket chimichurri (bone marrow fans opt for a meaty gremolata instead).

Beneath Driver Lane is mostly a late-night sort of venue. But Hamish has started doing ‘long lunches’ on Fridays. Oysters and champagne as far as the eye can see. It’s a hell of a way to end the working week.

If you’re paying attention, you’ll notice something special near the stairs too: a private tasting room where you can book a session with Hamish and the team. Wine tasting, whisky flights, small batch experiments—it’s all possible. Just chat to the bar staff and let them know you’re keen. They’ll set up a session for you.

We ask Hamish is he's gonna pop a sign out front for Beneath Driver Lane.

"Nah," he says. "I kind of like the idea of people poking their heads in. Wandering down and discovering us. I think we'll keep it a secret."

Want more info on Beneath Driver Lane? Check out our Directory page over here.