We Made That | Alejandro Saravia’s Ultimate Grilled Steak

Alejandro Saravia is no ordinary chef, and his restaurant Pastuso is no ordinary place to eat. Alejandro set up Pastuso back in 2014, bringing proper Peruvian food to the city for the first time. And since then he's developed great relationships with Gippsland's best cattle farmers, working closely with them to produce (no joke) some of the best beef in Melbourne.

What you're left with is a mutual respect between the cooks and the farmers, which translates beautifully onto the plate. After travelling with Texas-based BBQ maestro Jess Pryles and discovering the stories of Australian farmers, Alejandro now has a unique approach to Australian beef. Instead of ordering specific cuts, he orders a huge side of beef, shaped like Argentina, and won’t order more until the entire cut is used. According to Alejandro, he's the first Chef in Australia to do this. 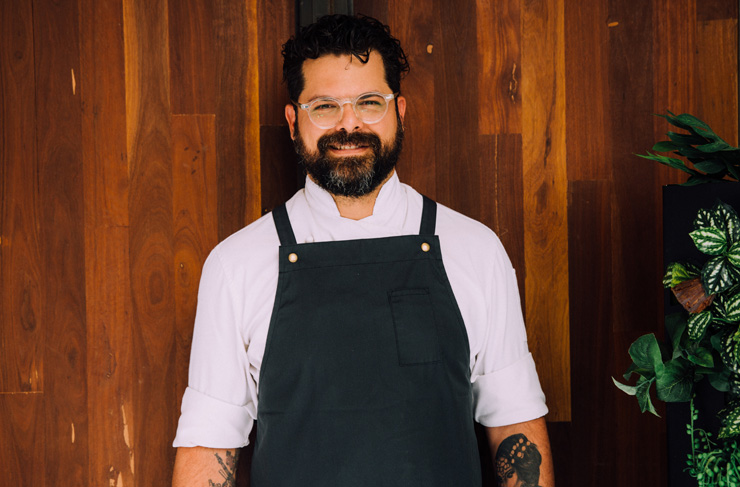 We got our hands dirty in the Pastuso kitchen to see what makes a steak there so bloody sensational, and how we can (attempt) to do it ourselves.

This method gives you a medium rare “South American style steak, which, according to Alejandro, is "a tad more rare than Australians are used to”. He says the best way to eat it is like this, and cooking it any longer takes away the amazing natural flavours and tenderness of the beef.

1. Grab out your Rib Eye and rest it at room temperature. There’s no point even beginning to cook until the steak has had time to cool down all the way through. As Alejandro says, “All things that are good take time”.

2. Fire up the BBQ. At Pastuso, Alejandro uses a classic South American way of grilling. Think red coals heated up in a hot box, then shovelled underneath a grill plate with some secret measurements. "It’s taken around two years to perfect the grooves in the grill plate, and we keep them secret,” he says. For home? It's best to get your hands on a DIY coal box, rather than having flames fly up from the BBQ and burn the meat.

3. Once the steak is at room temperature, (this should take around 15-20 minutes), it’s time to season. First, drizzle it in olive oil. Once that’s all lathered in, you want to give it a generous sprinkle of sea salt and a combination of three peppers. Don’t be hasty on this—get it nice and lathered.

4. We can’t tell you the specific temperature that the grill should be before chucking the steak on. Alejandro himself had no idea what temperature he cooks at. "The best way to judge how hot it should be is when the coals are nice and red, and look just as if they could crumble at any second,“ he says. (Sure, sounds simple) Once you think the coals are nice and sizzling, whack on your steak.

5. This step is important—and if you consider yourself an Aussie BBQ grill master, this one’s probably for you. “Don’t poke it, don’t flip it, don’t cut it, and don’t prod it. Just leave it," says Alejandro.

6. Once the salt and pepper start to caramelise and bubble, you’re good to move it off the heat and let it rest. The way Alejandro described this was “similar to damaging your arm muscles. All the strength and muscles take a nice hit, but then once rested, they return to their normal tender fullness”. Again, it should rest for around 15-20 minutes

7. After it’s rested, return it to a much lower heat for around 5 minutes. This is to make sure that the centre is still warm. “We don’t want to serve our customers a steak that is perfectly cooked on the outside, and average on the inside—what’s the point in that?”

8. Once moved to a plate, the steak is seasoned with a mix of sea salt and Peruvian dried chilli. There are no fancy sauces or butters offered with Alejandro’s steak—it's all about the meat here.

9. Enjoy your steak and try to savour every last mouthful. This may just be the best steak you will ever eat. You can thank Alejandro and the team at Pastuso for that.

Want to try the real thing? Head down to Pastuso and take a seat in front of the kitchen to see the magic for yourself. Tell Alejandro we sent you.