New In Town | Marquis of Lorne

Newly opened is probably the wrong term for Fitzroy's grand old dame, Marquis of Lorne, who first threw open her doors in 1873. Locals despaired when the joint shuffled off into oblivion quietly (or so it seemed) and she has lain empty for a while now.

Thankfully, the iconic Melbourne pub on the corner of George and Kerr Streets has reopened looking as old school cool as ever, with only minor touch ups thanks to Luke Henley of Wild Hen Design. New owners Matt Vero and Steve Rowley are still a little shell shocked with the switch to nights, as they hail from the café scene, with Richmond's Touchwood and Prahran's Tall Timber.

'It's a totally different schedule - going from day to night shifts has certainly been a change,' Vero laughs, before admitting he always had his eye on running a pub. The guys are backed up in pub know-how by Will Benjamin and Cal Hitchens who previously ran the Newmarket Hotel. 'When this popped up, we were excited to give it a crack.'

Vero hadn't realised just how fondly remembered Fitzroy's Marquis of Lorne was, but he's since been regaled with many a story of years gone by, care of his new regulars. Not that he wasn't aware of the weight of history when he walked into the fantastic old pub. 'We didn't want to massacre it,' Vero says. 'We wanted to retain the charm of it, so it was more about tidying it up while keeping the classic pub feel. It had become a bit dingy and dark.'

Original Marquis of Lorne features that have been retained range from intended design flourishes, including the stained-glass windows, and the not-so-intended, like the mysterious hole in the wall as you walk up the stairs. Tullamarine warehouse-based artist TJ Guzzardi, well known for his replica vintage sign work, was called in to recreate an old Fosters beer can sign Vero spotted in heritage pics of the pub's former glory days held at the Fitzroy Town Hall. What better way to usher in a new dawn for the Marquis? 'He's a cool guy, really talented,' Vero says.

The focus at Marquis of Lorne is on attentive but unpretentious service, with good beer and food. Aussie beers on tap include 3 Ravens Dark Smoke Beer, Mountain Goat IPA and Sample Gold Ale, alongside US hero Lost Coast Pale Ale, hailing from California. 'I'm looking forward till it's all settled down so I can kick back at the bar and enjoy,' Vero says.

Chef Jacob Swain, formerly of Epocha and Andrew McConnell's Builders Arms Hotel, wants to cruise a fine line that's a little bit above your standard pub grub while still offering great portions at decent prices, without getting overly fancy. 'We don't want to be a tight arse pub, and the cheeseburger is about as American as we'll go,' Swain laughs.

Swain, who's tackling the challenge of serving meals over three floors, with Marquis' menu available across the public bar, dining room and rooftop terrace, is sourcing all their grass-fed beef cuts from Adam North at Hopkins River, like the 250g scotch fillet and a hanger steak and a rump cap. 'The flavour is better with grass-fed, although it's a bit chewier,' he says. 'We're also doing a rump cap, which is quite tender and has a good fat marbling, so you get that nice charry vibe from that.'

Other menu highlights include bar food like chargrilled asparagus or potato cakes with chilli salt, slow-cooked lamb ribs and a rockling burger alongside the aforementioned cheeseburger. Dessert at Marquis of Lorne includes stone fruits like baked nectarines and apricots served with whipped cream and champagne jelly.

'The way I cook is unfussed,' Swain says. 'I'm fussy about technique, but I'm not about putting garnishes on that don't need to be there just because it looks pretty. Everything that's on the dish is there to be eaten because it tastes nice. I'm all about putting good quality product on the plate and letting it shine.' 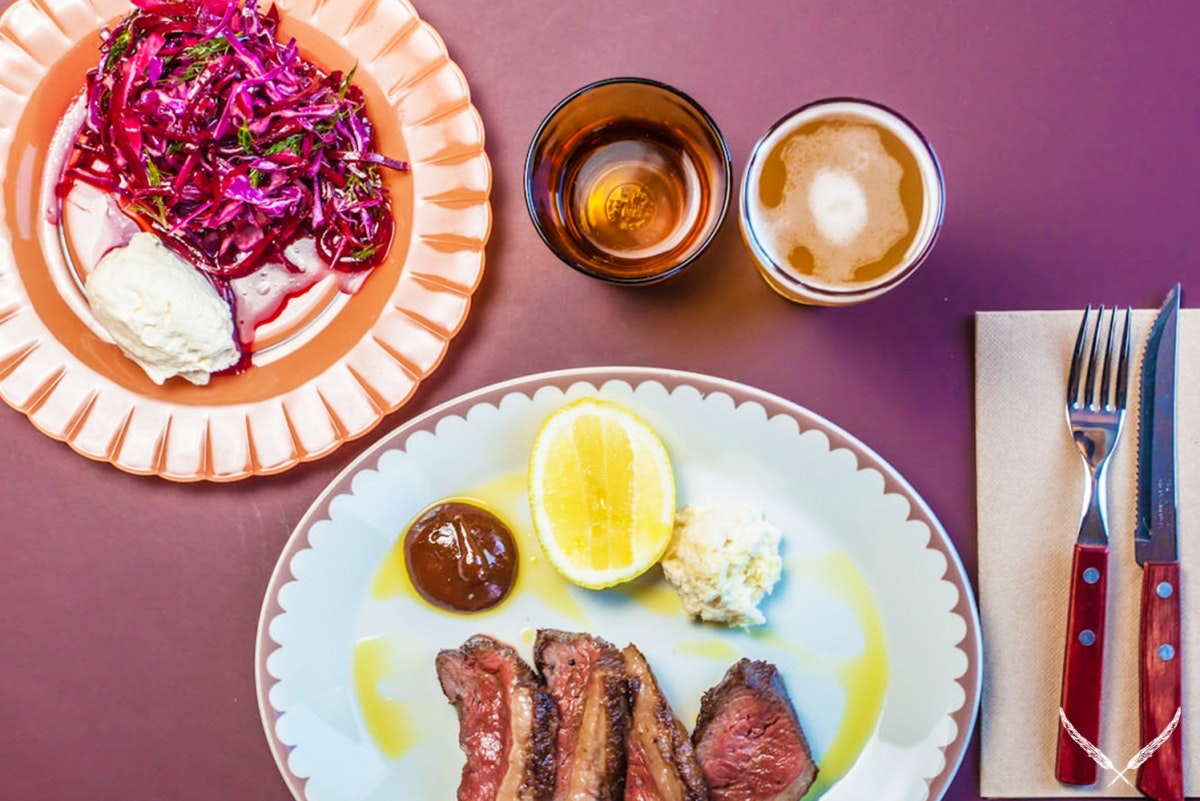