Nkechi Anele On Finding Her Voice In Music, Radio And Equality

You may know Nkechinyere Anele (AKA Nkechi) from her time fronting Aussie soul legends, Saskwatch, or maybe you’re familiar with the singer, songwriter and radio presenter from Triple J’s eclectic world music program, Roots ‘n All. She also founded an online platform exploring race, identity and the wider conversation around culture in Australia called The Pin.

Discussing her journey beginning as a student at Melbourne’s Victorian College of the Arts, to finding her groove leading Saskwatch and discovering her voice advocating for equality in Australia, we caught up with Nkechi for a candid conversation between her varied commitments across the wider cultural landscape.

Let’s take it back to highschool. Did you have any idea what you wanted to do for a living?

I just found it confusing to think that people wanted to be accountants or have this forward-thinking about careers. I started off wanting to be a psychologist, then wanted to do speech therapy, I wanted to be a scientist at one stage and held on to that. I was also studying music in year 11 and 12, and it was the only thing by the end of the year that I was really into. So I auditioned for VCA and I told myself that if I got in, that’s what I would do for three years at least and then figure out everything else.

When I graduated from VCA, a friend was like “Hey, I’ve got some songs that I’m writing but I don’t want to sing on them, do you want to come and sing?” and I really just wanted to be able to write music and learn about it in a bit more of a compassionate setting and less of a competitive one. So we started playing music and then started a band.

Anyway, the band that I was in, at our single launch at The Evelyn, we asked our mates called Saskwatch to do the gig and they asked me if I could fill in because the singer wasn’t available.

You’ve fronted Saskwatch for the past decade now. Is that where the journey began?

Yep, that’s how I entered into the group. I left the other band and started playing with Saskwatch. We were originally just doing covers, but every now and again someone would come along with an original piece, so we’d try it out in front of a crowd and have heaps of fun with it.

Was there a moment where you realised that you might not be following the 9 to 5 career path?

It actually didn’t dawn on me until two years in, when I was walking up the stairs to go back to my apartment, and I realised that it was not a hobby. It really was not a hobby, even though I’d studied it and been around musicians who play professionally and it was 100% their life, I always thought for me that this is a hobby and it’s just helping me get through the week, helping me get all my frustrations out, but I didn’t actually think that I was a musician. 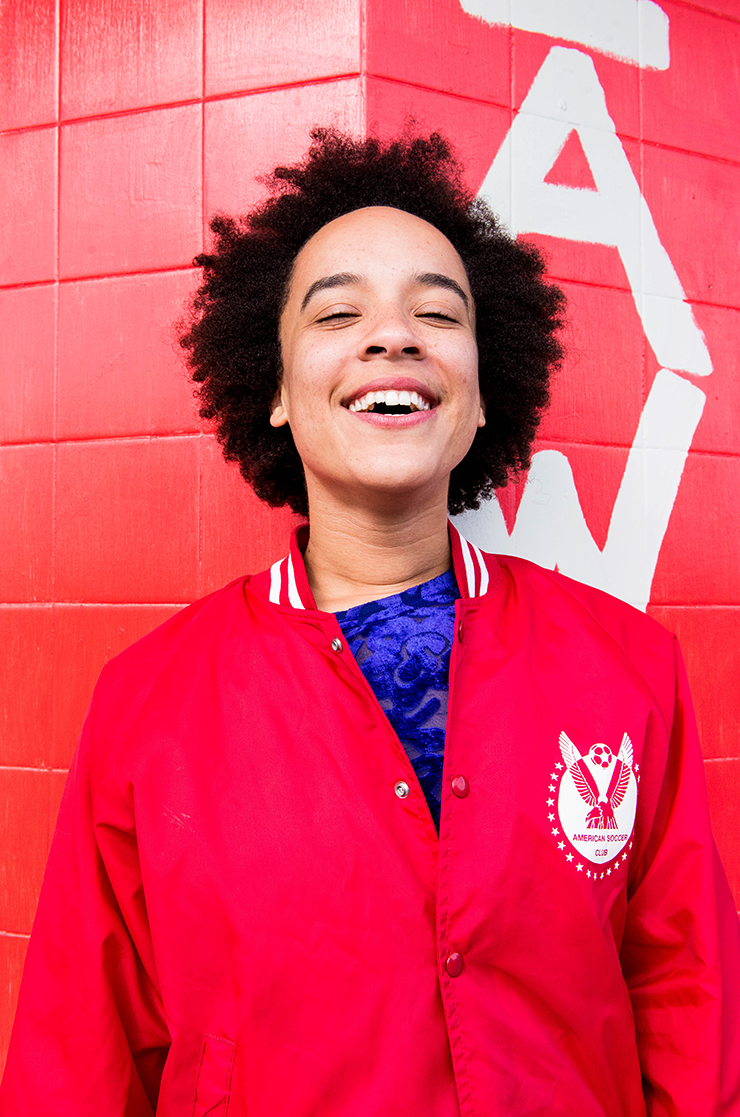 Stepping back several years, you started guest-presenting on Triple J. How did you get your foot in the door there?

I came on to Triple J as a guest presenter, just because Sarah Howells from Roots ‘n All had taken a sabbatical. I literally got a phone call and it was my manager saying Ollie Ward from Triple J was going to call and ask me to be a guest presenter.

I was petrified, because when I started out in the music industry, I didn’t like talking to people, or talking in front of people that I didn’t know. So it was crazy to realise my voice was going to be on a national broadcasting station.

And then you locked in a permanent slot presenting on Triple J’s on Roots 'n All back in 2017?

They first asked me to present for the rest of the year and at the time Saskwatch was on somewhat of a hiatus. I thought why not. If I’m not touring, I might as well be talking about music every week and still be around the music scene. At the end of the year, they asked me if I’d like to come on board and I was so excited. I thought they were just going to be like “ thanks for your time, it’s been great”. I didn’t actually expect them to offer me anything, and it’s been a really beautiful process because I think as a musician I’ve had the experience of hearing a song being played on Triple J for the first time and the excitement of knowing that it’s outside of your own world.

Were you actively trying to chase down the gig, or was it an organic process?

To be honest, this one totally fell into my lap. But, I don’t want to do a shit job, or at least I’m trying not to. I don’t really have any choice if people don’t like my taste, but the minute I got the job I felt like this is something I want to be a part of.

It came at a weird time of realising that I’ve been in the industry for a decade. Like, that’s a really weird realisation to have because you still feel young and naive and optimistic. I still love music as strongly as I ever have though.

Did you ever face the dreaded imposter syndrome throughout the process?

Totally, I still experience it. I don’t think that feeling ever leaves you, and I think for a creative, it’s hard to know when that feeling is a drive to do better or if it’s self-doubt, and it’s a really hard one to navigate.

Sophie, a very dear friend of mine made a sign for me for the first time Saskwatch at a big festival which was Golden Plains, and ironically that’s happening this weekend. She made a sign for me saying “fake it til you make it” and I’ve used that mantra for most of my adult life, just to fake feeling like you belong there even if you feel like you’re a complete imposter. 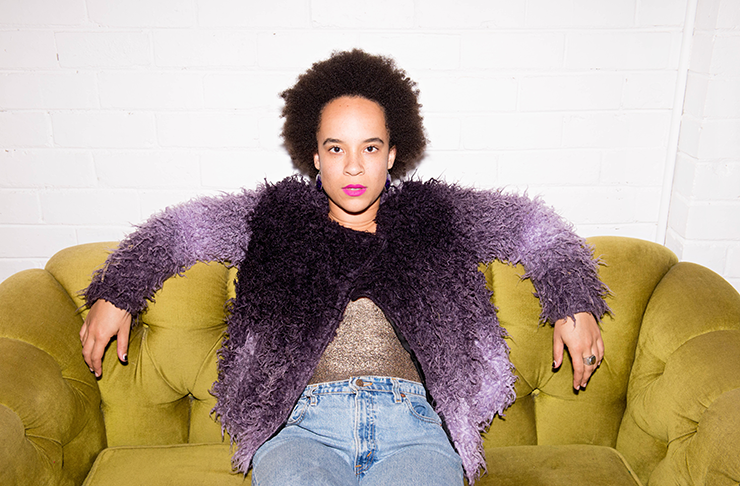 And how about hurdles in your career, have you faced any?

I think mental health has been one of the biggest ones having struggled with it myself, seeing people around me struggle with it. Knowing that the music industry wants to help, but knowing that our industry has a reputation for sex, drugs and rock and roll and how it’s so easy to hide somebody’s mental health behind their creative approach to being an artist, and seeing the fallout of that.

For me, I had real issues when it came to being female in the industry, and I’m only k realising it now that change is happening. There were a lot of things where I think “ oh that the norm” and I’m only posthumously realising that it was unacceptable. Nothing #metoo-ish, but just the way people spoke to me, or the approach people had towards me was unacceptable and it was because I was a woman.

There’s been so many times where I’ve been ignored in situations because they just assume “oh she’s not in the band or she doesn’t know what she’s doing”. There’s been times where guys have told me how to hold a microphone the first time they meet me, which is frustrating.

So what are some of these changes you’ve noticed? Are they for the better?

Yeah, women feel a lot better about speaking up and I feel like women, particularly in the music industry, that there’s comradery here where there wasn’t before. If you saw another female who was in a band playing at a gig you were at, there wasn’t necessarily this feeling of finally having someone else with you, there was instead this competitive nature. It was how the industry spoke to us, it was how they told us how we had to be. We had to be alluring and not tell people anything about us and not let people in and all this other shit that messes with a lot of women. And now I feel like when women see each other out they really support each other and it’s about them being a strong musician, not being a female who is a strong musician.

What advice can you give younger women trying to find their voice?

Be yourself. Don’t take shit.

Three years ago you launched The Pin, which discusses race, identity and culture. Do you feel that there was a need for a platform like this in Australia?

The way that we talked about multiculturalism and diverse societies was very black and white. I think for me the frustration was how, politically, people were grouped together because they were seen as different and there was no acknowledgement of the complexities of the cultures that were in Australia; people were also ashamed to be different. Myself included. I feel like the conversation has moved on a lot more. People are proud of their identity, and they want their cultural identity to be a part of who they are instead of being whitewashed.

And what else do you think is being done to lift equality and diversity in Australia?

We’re trying to move away from tokenism diversity, which is awesome. It can be hard to tell though, because I live in Melbourne and Melbourne is a specific cultural bubble. it’s not necessarily the same around the country.

I think we listen more to the indigenous people of this land and we don’t listen to them and just brush it off. There’s now follow through and there’s accountability. I think that has definitely changed and I hope to see it change further in the future. A lot of people who come from the quote-unquote, diversely multicultural societies of Australia, also support our indigenous people and are more interested in banding together now to help move Australia forward.

On a personal level, do you have anywhere or anyone that you get your inspiration from?

At the risk of sounding like a mummy’s girl, I’ve always grown up surrounded by really strong women, my mum being the forefront of that, but a lot of my friends inspire me because I see how much they push in their artistry, Or they push to be heard and they’re doing a lot of work for different communities and that just inspires me. I’ve got this strong entourage of support, and people who I can support and discuss these things with. I try to surround myself with strong, smart women as much as possible, and sensitive, smart men.

What’s next in your pipeline?

Well, I’m hopefully going to get through this masters that I’ve just started. So I’m going back to school to work on a few things. I actually don’t know and I’m perfectly okay with that right now.

Listen out for more at our Music section.