There are a lot of things that get better when you put them on sticks. Flags...tents...lollypops...your enemies—wait, what?.

Here’s something else that goes great with a stick: A wedge of homemade vanilla cheesecake, smothered in caramel sauce and dusted with biscuit pieces. Which brings us neatly to this place.

Stix is a pop-up venue on Sydney Rd in Coburg, just along from the old Pentridge Prison. Most people never make it this deep into the northlands, either because they stopped for a kebab somewhere around Bell St or the Sydney Rd traffic crushed their soul into a million tiny pieces. But if you do make the trek, the rewards are substantial...and taste like cheesecake.

Stix isn’t a restaurant, per say. And it’s not a food truck either. It’s basically just owner and founder Lisa Dib, her partner and a few trestles. But don’t let the homemade charm fool you—the treats they’re dishing out are as good as you’ll find in any swish southside dessert bar.

Let’s start with the main event: the cheesecake. These are baked vanilla cheesecakes, chilled to dense, slightly sour perfection, with a hint of vanilla and lemon in the batter. The base is your standard butter and biscuit blend, with just the right amount of crunch. 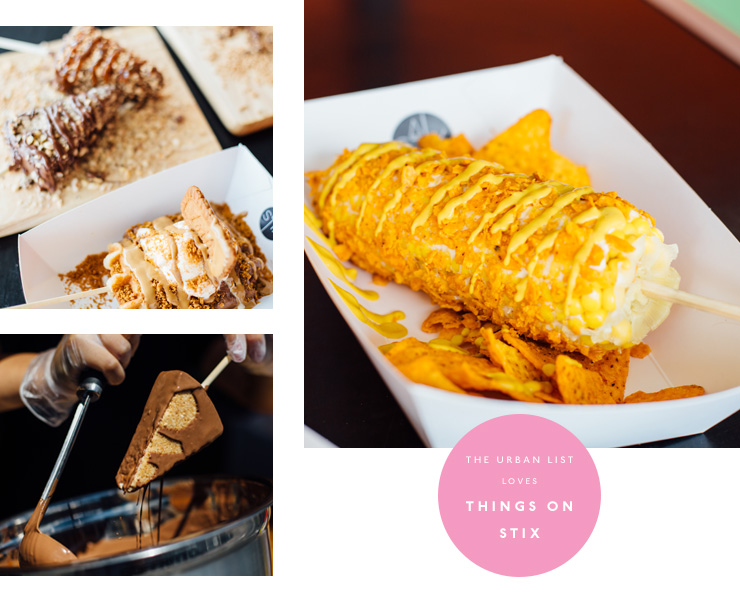 Stix takes wodges of these covers them with stuff like mango coulis and flaked coconut, crumbled up Snickers and chocolate sauce, Lotus biscotti and sticky caramel (the infamous ‘Lotus Speculoo’). Our personal fave is the Golden Gaytime cheesecake—a choc-caramel blend, dusted in proper Gaytime biscuit pieces. Tastes just like the real thing, on 10-speed.

If you’re after something a little more savoury, Stix has also invented what could be the snack of the year. It’s a golden sweet corn on the cob, dusted in ground-up Doritos. It’s a cheese-corn combo we’ve never tried before. But damn we’ll be coming back for seconds. This thing could give Mamasita’s corn and queso a run for its money.

Drinks-wise, Lisa and the team have put together your basic coffee list—short blacks, lattes and ‘fla whites’ (the ‘t’ fell off). What isn’t so basic are the shakes. Mixed with full cream milk and wicked flavour bombs like Nutella (yum), Caramel Biscotti (outrageous), and our personal favourite Lemon Biscuit (here, take our firstborn as payment).

The only trick with Stix is catching it. This is a bit of a side-hustle for Lisa, so the pop-up only pops after 5pm each night. Doesn’t matter too much in summer though.

Just hop in the car, drive up Sydney Rd, get your Stix, then head to the nearby Merry Creek trail. And maybe a sneaky Coburg Drive-In movie for later. Perfect Melbourne evening right there.

Want to learn a bit more about Stix? Check out their Directory page over here.